Barbuda's only wetland being destroyed for luxury villas & golf course

Barbudans need your help to fight a crucial legal battle to protect their environment and resist the construction of a vast airport and resort on communally held land which has now been taken away from them.

The people of Barbuda, part of the larger state of Antigua and Barbuda, were evacuated after Hurricane Irma devastated the island in September 2017. The lack of reconstruction efforts still prevented many Barbudans from returning to their ruined homes.

During this time, new laws were pushed forward allowing the government to take control of vast areas of communally held lands to sell to outside investors.

As part of this strategy, the government took advantage of the displacement of Barbudans to clear acres of forest, to construct a new international airport, in connection with plans to build a multi-million-dollar tourism resort. This was done without the consent of Barbudans or the Barbuda Land Council, and without an appropriate Environmental Impact Assessment, requirements of the law. Meanwhile, it has failed to help Barbudans restore the basic infrastructure that they need to survive.

What's worse is that the area that was first cleared was abandoned, and work is now underway clearing a second area of forest.

Some Barbudans are fighting back and have launched a challenge against three different government bodies to prevent further deforestation and construction of the airport. In early August 2018, work on the new airport was halted by an injunction. However, this was lifted in September 2018. On 7 March 2019, the High Court dismissed a second legal challenge against the Airport Authority purely on procedural grounds, but the Barbudans are appealing the decision. The claims against the other bodies remain ongoing. We aim to raise funds as soon as possible to prepare for the appeal and a long legal battle ahead. 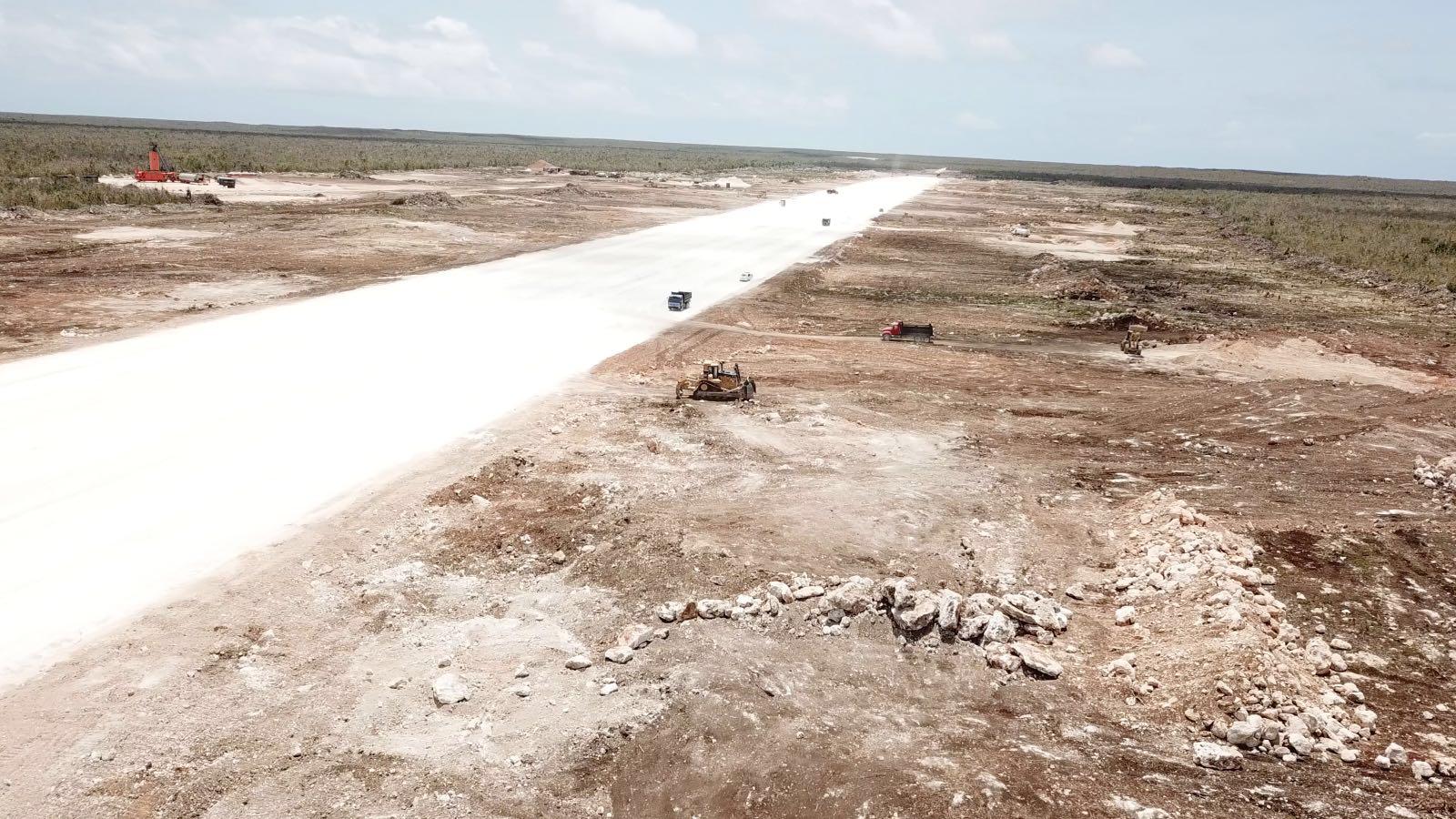 Why Barbudans need your help

There are very serious environmental consequences at stake in this development, given that Barbuda is home to a very delicate ecosystem. Clearing acres of virgin forest will have a detrimental impact on the island’s flora and fauna, especially for species such as the Barbudan warbler, fallow deer and red-footed tortoise. If urgent action is not taken the damage to Barbuda’s fragile ecosystem will be irreversible.

Sites of important historical significance have also been damaged and there are further concerns surrounding the airport’s safety after hazardous caves were discovered to lie under the proposed airstrip. 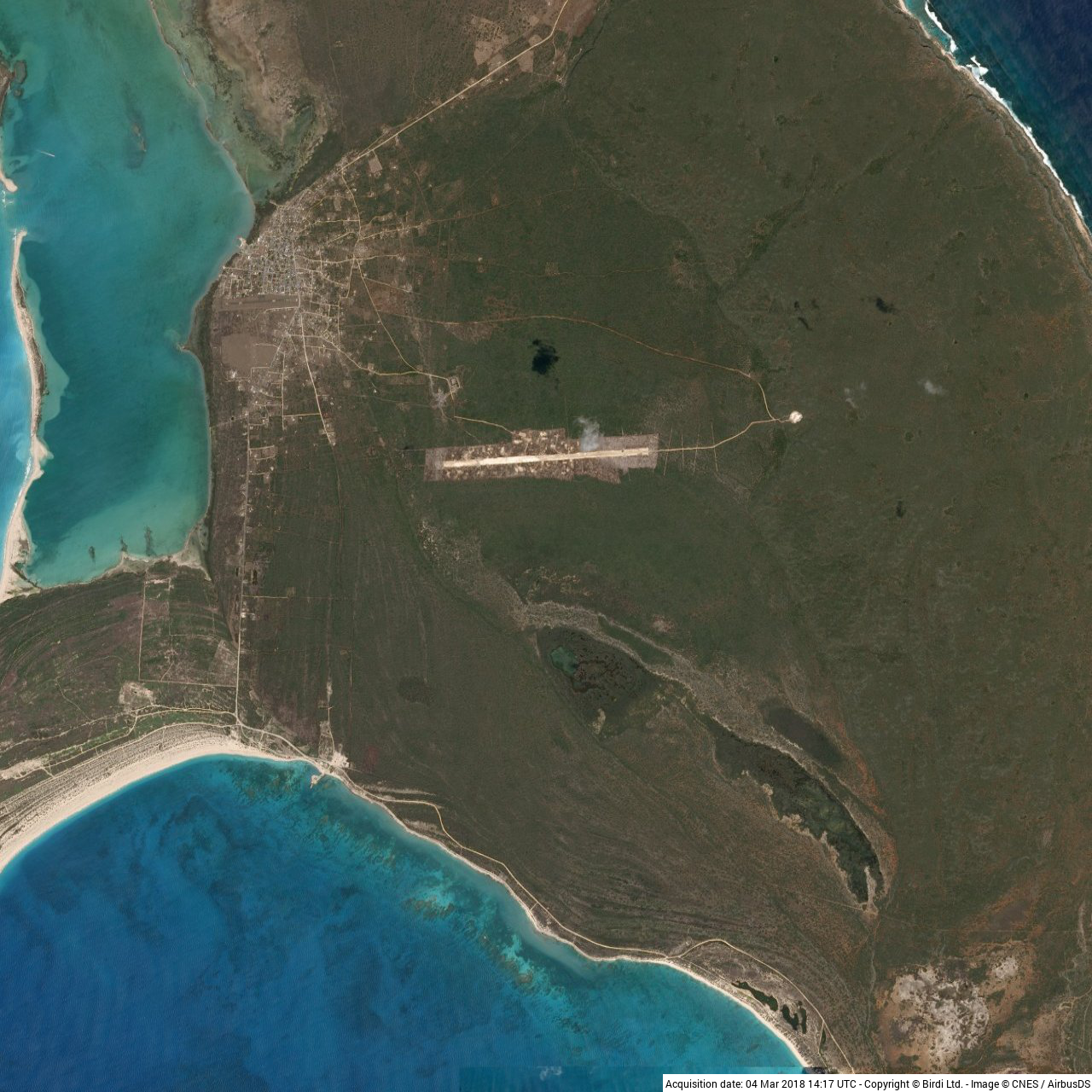 Above: Aerial view of island showing scale of initial phase of the airport  runway and its forested location

This is about more than Barbuda

The government has taken advantage of a natural disaster and the displacement of Barbudans to begin construction of the airport. Land grabs, such as this, are symptomatic of a global trend where vulnerable communities are dispossessed of their land to make way for large-scale private investments from which governments, multinational corporations and investors seek to profit.

Moreover, construction on the airport will have a direct impact on climate change, to which Barbuda, a low-lying island, is particularly vulnerable. Rather than increase carbon emissions through the creation of another airport, the government should be protecting people, forests and the environment.

Barbudans are being represented on a pro-bono basis by leading barristers from Garden Court Chambers in the UK, who have vast expertise in environmental and human rights law, in association with Justice Chambers in Antigua. GLAN is providing legal and logistical support.

Our legal plan and how the money will be spent

After a hearing today the judge ruled that the claim against the Airport Authority would be struck out on a technical ground, without discussing the merits of the case. We aim to the support the Barbudans in appealing this decision and to prepare for a long legal battle ahead.

Funds will help to cover substantial travel costs and court fees for Barbudans to travel to nearby Antigua to file court documents, which they are currently having to pay for themselves. Funds will also cover the travel costs of barristers travelling from the UK for key engagements and court appearances.

As custodians of their island, it is vitally important that Barbudans are fully equipped to defend their rights. The result of the court is a setback but the Barbudans are determined to fight on to secure justice. The appeal will be one of many legal battles to come in the future.

As the government continues to throw hurdles in front of them, Barbudans are running out of resources. They need support quickly in order to continue this legal battle. With your support we can ensure they have the enough to cover the some of the essential and immediate costs of this longer term battle.

Barbuda's only wetland being destroyed for luxury villas & golf course

Barbuda’s island residents have been excluded from their lands and forced to watch through Instagram posts as their treasured wetland and national park are being transformed into luxury private resorts and a golf course for the ultra wealthy.

Today - on International Wetlands Day - Barbudan activists and their partners have launched SaveBarbuda.org, in an attempt to raise their voices.

The site details how Barbuda’s lands are being grabbed up by celebrity billionaires and foreign companies, and privatized to create the highly contested luxury resorts and villas. These developments are jeopardizing endangered species, water supply and the ability of the low-lying island to withstand climate change — all while upending the island’s unique communal tenure system, developed following the abolition of slavery.

GLAN has partnered with the SaveBarbuda movement to launch this new advocacy website and to drive this movement forward.

We need your help more than ever. Together, we can work to stop these companies from destroying Barbuda’s protected wetlands, defend the critically endangered species they’ve put at risk, and stand in solidarity with the Barbudans whose sovereignty and human rights are being violated each day.

With your donations, GLAN and the SaveBarbuda movement will: 1) Support local legal actions conducted by a Barbudan attorney; 2) finance research work by Barbudan activists to collect key visual and oral evidence needed to oppose the false ‘sustainability’ narrative of developers and billionaires; and 3) strengthen GLAN’s efforts to build a comprehensive evidence database, a resource that will be shared with other legal teams.

It's a race against time as construction continues. Your support can fuel Barbuda's victory.

We submitted an int'l complaint calling for independent mission visit

GLAN has submitted a complaint to the Ramsar Secretariat calling for an urgent intervention to arrange an independent inspection mission. The complaint concerns the destruction of a listed wetland on the island of Barbuda after the government of allowed the development of a luxury resort and golf course by the US partnership ‘Peace Love Happiness’ (PLH) and Discovery Land Company, a US-based real estate developer and operator. 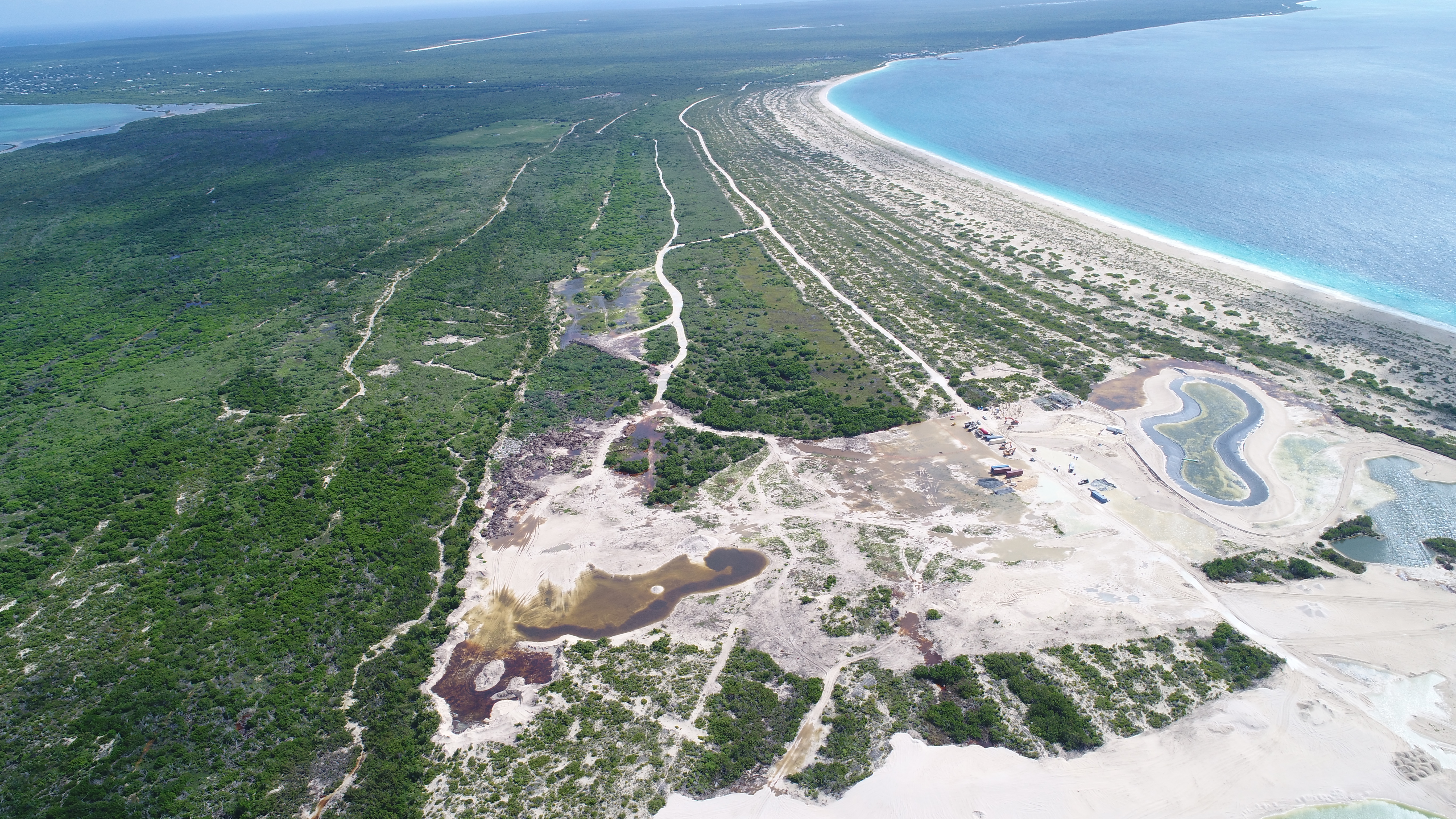 Since 2018, PLH Barbuda and Discovery Land Company have been building "Barbuda Ocean Club" on a site that falls within Codrington Lagoon National Park (“CLNP”). PLH Barbuda and Discovery Land Company have operated on the island through a lease that the Barbuda Council considers in breach of the Barbuda Land Act, 2007. This legislation codified the island’s unique collective tenure system established after the abolition of slavery. For two years, deforestation and sand mobilization for the PLH development have severely affected the ecology of CLNP, a designated Wetland of International Importance under the Ramsar Convention. The Ramsar Secretariat is a Geneva based body overseeing the implementation of the intergovernmental Convention on Wetlands of International Importance. 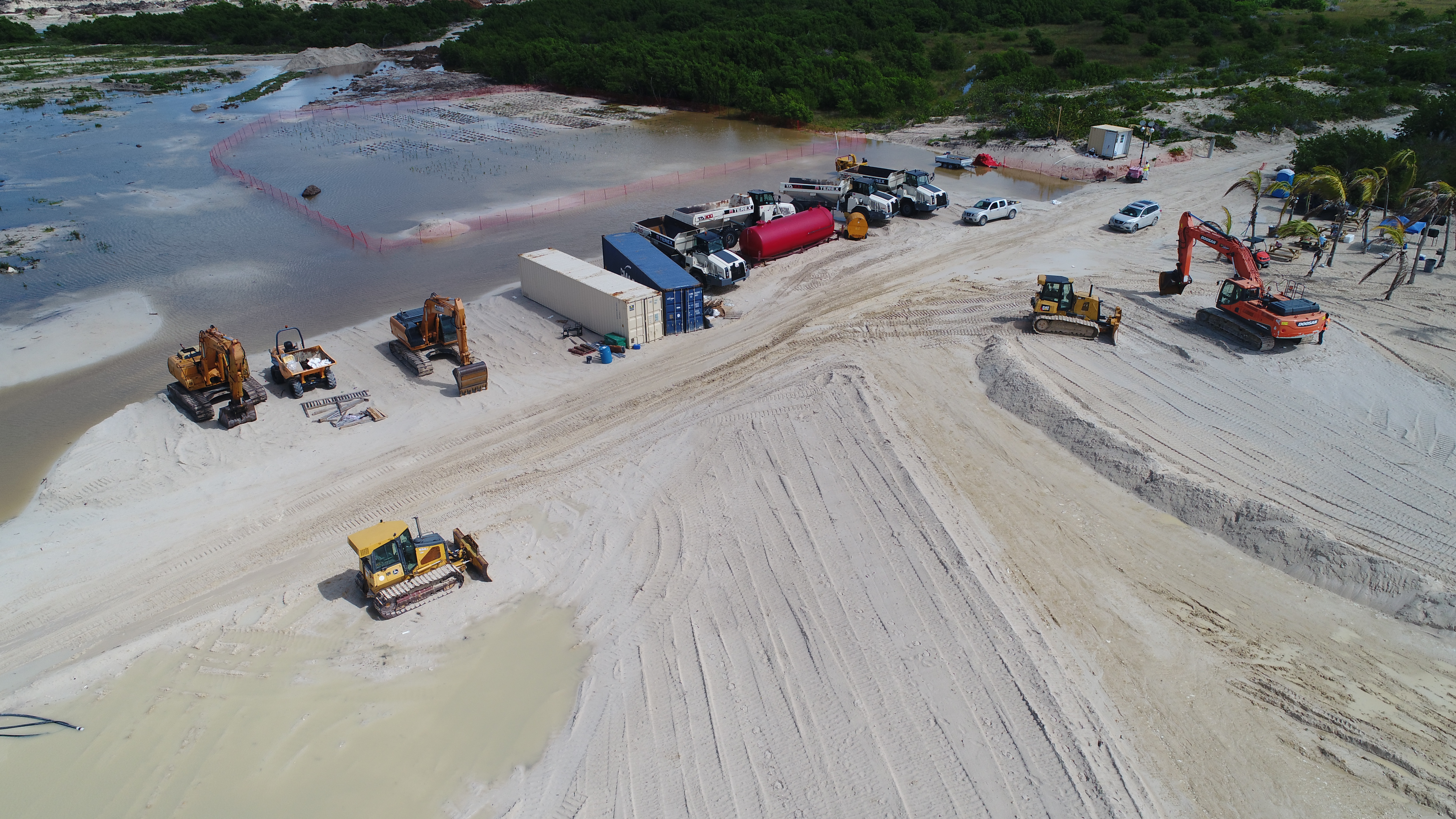 According to the land concession granted to PLH (Barbuda) the nearby controversial airport, constructed on confiscated land in the immediate aftermath of Hurricane Irma, was positioned to service PLH’s resort. Litigation efforts to halt the construction of the airport are paused due to COVID.

As you may recall, the High Court of Antigua and Barbuda struck out the claim by Barbudans seeking to defend their land from being seized and used for an ecologically destructive international airport. However, the Barbudans recently won their case in the Eastern Caribbean Court of Appeal against the Antigua and Barbuda Airport Authority, which overturned the decision of the High Court. The courts will now examine the governments’ failure to comply with its own laws and regulations in selecting the land and clearing forest to make way for the development.

Thank you to all those who have supported the case so far. This is just one small victory in a long legal battle which we expect to be appealed all the way to the highest courts.

The money raised so far has been transferred to the Barbudans’ legal team to pay for the costs of past hearings. Each new hearing brings unavoidable expenses and so we need to raise more funds to cover future costs.

We are keeping the crowdfunding page live, so please share this page with others to spread the word and ensure that the Barbudans can continue their fight!

Details on the most recent decision

The High Court, in hearing the judicial review proceedings challenging the decision to build the airport, had found that affidavits filed for the initial hearing were “spent”. This was because they had already been used before in the proceedings and could no longer be relied on without permission of the court. As permission had not been granted, the judge struck out the claim.

The Barbudans’ legal team argued that the judge can choose to correct such procedural errors in the interests of justice, rather than taking the draconian step of striking out the claim. The Court of Appeal agreed, accepting all of the legal team’s arguments and rejecting all of Antigua and Barbuda Airport Authority’s submissions.

The court reinstated the Barbudans’ claim and allowed them to rely on the documents filed earlier in the proceedings. It has also set aside the order which forced the Barbudan claimants to pay the Airport Authority’s costs.

We have some great news for you! The Court of Appeal has granted the Barbudans leave to appeal the decision of the High Court to strike out their claim against the Airport Authority. This means they will have the chance to argue against the strike out and for a substantive case to be heard. The process of preparing for the appeal has begun and we will let you know when a date is set for the hearing.

Back in April, the High Court heard the claimants’ arguments against the Development Control Authority and the Attorney General on whether the interim injunction should be reinstated, which would prevent the public authorities from constructing the airport. They argued that the works on the airport breached Antigua and Barbudan planning law and that continued development of the airport would seriously harm Barbuda’s environment and wildlife. We are still waiting for the judgment on this point but will update you as soon as we are informed of a decision.

Thank you to everyone who has donated so far, which has enabled the tireless Barbudans and their legal team to take the case forward. We will let you know of any further updates in the case.