Justice for Jared - A parents journey following his premature death.

Justice for Jared - A parents journey following his premature death.

Vicky Whitehouse
Case Owner
My name is Vicky Whitehouse and I have been campaigning for over 5 years to get answers into the premature death of my son, Jared, we now have a date for his inquest which is in December 2020.
Funded
on 10th October 2020
£6,014
pledged of £6,500 stretch target from 262 pledges

Vicky Whitehouse
Case Owner
My name is Vicky Whitehouse and I have been campaigning for over 5 years to get answers into the premature death of my son, Jared, we now have a date for his inquest which is in December 2020.
Share on Facebook

Wow. I don’t really know what words to use to say thank you, but I am so very grateful to each and every one of you who has supported #JusticeforJaredB. I’ve been blown away by your gener…

My son, Jared, died when he was just 20 years old and I am still don't know what happened.  I am fund-raising because I cant get answers at his inquest in December 2020 without a barrister.

The last time I saw my son alive was at Christmas 2014.  Jared had been at the centre of our family, safe, well and loved in our family home for 18 years, and after less than two years at Ability Care UK, he was dead.  I spoke to Jared on News Years Day in 2014-2015 and that was the last time I ever spoke to him.

On the 4th January 2015 I woke at 7am to find a text message on my phone from a number I did not know.  This message, sent the night before at around midnight, stated that Jared had been taken poorly and he was currently en route to A&E in an ambulance, and that they would ring me as soon as he arrived at the hospital.

Completely alarmed , I rang his carers to check whether Jared was still in hospital.  The phone was passed to the manager who informed me over the phone that Jared had died at 1am in hospital.

At this point he had been dead for 6 hours.

No-one contacted me. No-one gave me the chance to be with my son in the last moments of his life.  No parent should have that choice taken away from them.  Nothing can ever prepare you for that pain.

What has happened since.

Its now coming up to six years since Jared died and I have fought tirelessly for answers about why my son died suddenly, at the age of 20 with no life-limiting conditions.

Since Jared died we've learned that he became unwell on 2nd January and over the following days his condition did not improve.  Apparently medical advice was sought from Jared GP surgery and he was diagnosed with diarrhoea and vomiting.  Despite the local hospital advising that Jared must attend hospital if he became unwell, this did not happen until a few hours before his death.  Too little, too late.

A Serious Incident Report conducted by the local NHS 111, the out of hours GP service suggests that Jared should have been taken to A&E sooner and found that the carers had been given inaccurate advice about the symptoms of sepsis.

Why I need your help.

After a long wait, Jared inquest is taking place in 10 weeks, on the 7th and 8th of December 2020.  This will be the first time I have the opportunity to put questions to Jared carers to understand what went wrong between 2nd and 4th January 2015.  this case doesn't meet the criteria for Legal Aid Funding.  I therefore need to raise at least £2,500 to cover the legal costs of my solicitor and barrister attending the inquest over the course of the 2 day hearing.

Please donate whatever you can afford anything is appreciated.

Jared was my first born, arriving into this world on Sunday 20th February 1994.  I was a young mum only 19, but so excited for what the future held.  Jared was a perfect baby, he didn't cry a lot, he slept and he fed well, but at his 6 month check-up there was concern he wasn't putting weight on.

From that point onwards Jared started to receive support.  We had input physiotherapists, occupational therapists and a speech therapist who came to our home along with a brilliant community paediatric nurse.  Jared started to receive overnight feed from about 9 months through a nano-gastric tube, this would change to him being PEG fed when he became 2.  Everyone loved working with Jared, he was such a gorgeous boy and tried his hardest to do what was asked of him.

When Jared was six , coming up to seven, his sister was born, and a few years later my youngest son arrived.  Jared loved being a big brother and had a very, very close bond with his little brother.  They used to enjoy watching Spongebob Squarepants together, playing with Lego and as they got older playing Playstation games together.  Jared had an electric wheelchair and my youngest son would stand on the back of it every morning to go to Jared school bus, and he would spend the afternoon waiting for him to come home so they could do the same journey into the house.

I was a single parent and didn't have a lot of spare money, but we had a lot of love and a happy family home, Jared also had a great relationship with his grandparents.

Jared was diagnosed with a metabolic disorder, and learning difficulties, attending our local special school.  He didn't let anything get in his way of having a good life though.  Jared remained small throughout his life, but none the less had an enormous appetite, he'd eat everything and anything except apples, he drew the line at them unless they were in a pie.  If you had a spare strawberry yoghurt though, he would happily take that off your hands.

Jared lived at home with myself and his two younger siblings until he was 18.  Like any family, we knew each other well, and supported each other, we were a close family unit.  Without my knowledge in November 2012, a social worker visited Jared in school when he had turned 18 and conducted a Mental Capacity Assessment, which I've never seen.  This Mental Capacity Assessment deemed Jared to be capable of making his own decisions.

One day in January he left for school and made a seemingly innocuous comment, asking when he was going to Yew Tress again. (Yew Trees was our local respite service, and Jared loved it there, they did lots of fun things we couldn't necessarily afford as a family, trips to the seaside, or the cinema).  I didn't think anything of it.

Jared never came home from school that day.  Apparently Jared had mentioned at school he was unhappy at home, and because the social worker deemed him capable of making his own decisions, they were not returning him home.  Jared went to Yew Trees to start with.  I visited him and he talked about coming home.  I attended a subsequent meeting, where there were lots of professional and they said to Jared 'you've a couple of choices, you are old enough to make your own decisions, you can go home or go to somewhere like Yew Trees called Ability'.  Jared choose the latter and I felt that I had to support his decision, he was growing up, and if that's what he wanted, who was I to stop him.

Strangely I was never asked to contribute to his handover, no-one asked me about his like and dislikes, his medical condition.  I felt like they didn't want me involved and the atmosphere was difficult when I visited Jared.

He left school in June after he turned 19 and moved in to a supported living bungalow the following September.  I worked full time, and still had other 2 children to support, but would visit Jared as often as I could on my days off and we'd go out and do things, visit Meadowhall Shopping Centre.  Id take him to get his hair cut, that sort of thing.  Jared started talking about wanting to come home, but I felt certain that wouldn't happen because the care provider was being paid a lot of money to look after him.

The last time I saw Jared was on New Years Day in 2015.  On the 4th January without my knowledge, Jared died in the early hours of the morning at Chesterfield Royal Hospital.

I cant afford to donate, how else can I help ?

We know that times are tight right now, and I totally understand some won't be able to donate, but please share this appeal on your social media accounts.  Tell people about Jared, let them know what happened.  You could use the hashtag JusticeforJaredB

Wow. I don’t really know what words to use to say thank you, but I am so very grateful to each and every one of you who has supported #JusticeforJaredB. I’ve been blown away by your generosity, lovely comments, shares on social media and so touched by your support.

For years I’ve known what happened wasn’t right, but so many times I’ve questioned myself. There seems to be an acceptance that disabled people die early and I know that’s not right, and now I know that so many of you feel the same way. Thank you.

We met our initial fundraising target in the first 24hours of Jared’s page going live. I’ve raised the stretch target twice since then, so that people could donate if they wished to. I wanted to post an update so you know how your money will be used. The first £4,500 will cover the costs of my solicitor and barrister to be in court for the two days, based on their reduced rates for 6 hours each day. If we are able to reach the stretch target of £6,000 then we will be able to instruct an independent expert to provide a report for us to consider some of the aspects of Jared’s care.

Once we reach £6,000 the fundraiser will be closed to new donations and we’d suggest people donate to other similar cases such as that of Sally Lewis https://www.crowdjustice.com/case/justiceforsally/

I’ll leave you with Jared preparing for halloween, he would thank people so much if he could but I will on his behalf. 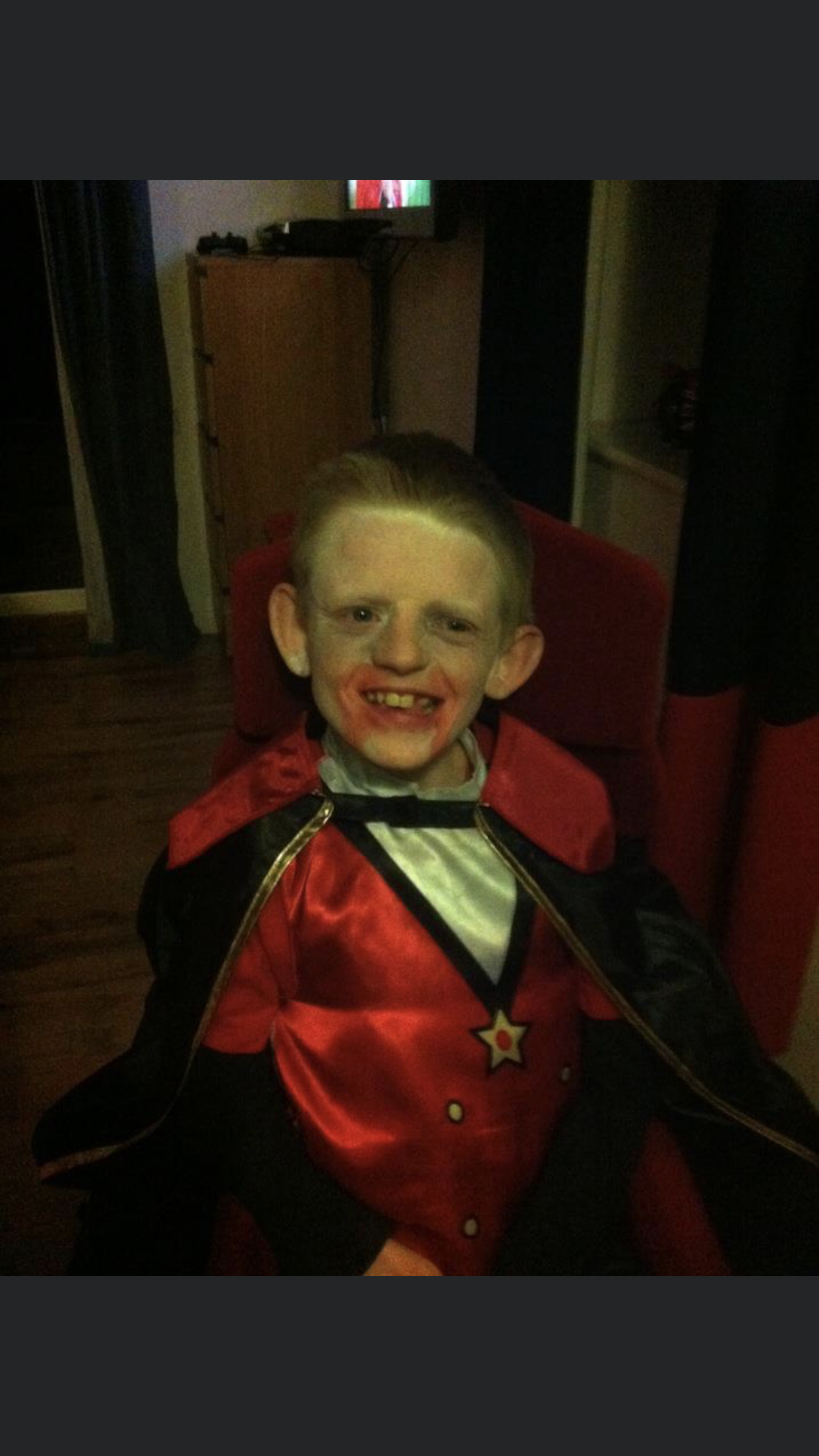