David McMullen
Case Owner
David is a 13yr Veteran having served in Afghan. Has since helped lots of veteran charities and is now a trustee of Force Online. Was on the campaign team for the successful Free the Chennai6 Campaign
20
days to go
£51,655
pledged of £62,600 stretch target from 1,876 pledges
Pledge now

David McMullen
Case Owner
David is a 13yr Veteran having served in Afghan. Has since helped lots of veteran charities and is now a trustee of Force Online. Was on the campaign team for the successful Free the Chennai6 Campaign
Pledge now

CALLING ALL SUPPORTERS - As many of you know we are off to the High Court Tuesday 1st December. Normally we would have had a demo outside court but it’s being done remotely because of Corona. S…

We are representing eight Commonwealth veterans who are challenging the Ministry of Defence for failures to comply with its own guidance when discharging Foreign & Commonwealth HM Forces personnel from the Forces.

These veterans are also challenging the Home Office over the level of application fees for permanent residence applications, maintaining that these should be waived for Foreign & Commonwealth veterans and their families.

In times of conflict, the Commonwealth countries have readily supported the UK and now we are calling on the UK to remember their heroic efforts.

The failings by the Ministry of Defence and the Home Office have had serious implications for the veterans and their families. Combined with the hostile environment measures mainly introduced when Theresa May was Home Secretary and later PM, and continued and strengthened by the current government, many veterans now find themselves in financial difficulties or at the risk of being so.

At a time when the UK is in a pandemic crisis, the veterans also live in fear of needing to access medical care which, despite serving in the UK Forces, they are currently not entitled to and cannot afford to pay for privately.

When one of the veterans, Taitusi Ratucaucau (pictured below), was recently admitted into hospital for emergency major brain surgery, only to be presented with a bill for thousands of pounds, the unfairness rightly hit the headlines.

Veteran Taitusi was deemed ineligible for free NHS treatment, despite having served in the UK army for over 10 years, including on several operations in Afghanistan and Iraq.

Living in limbo, unable to afford permanent residence or healthcare has caused great emotional and psychological strain for these veterans and their families. 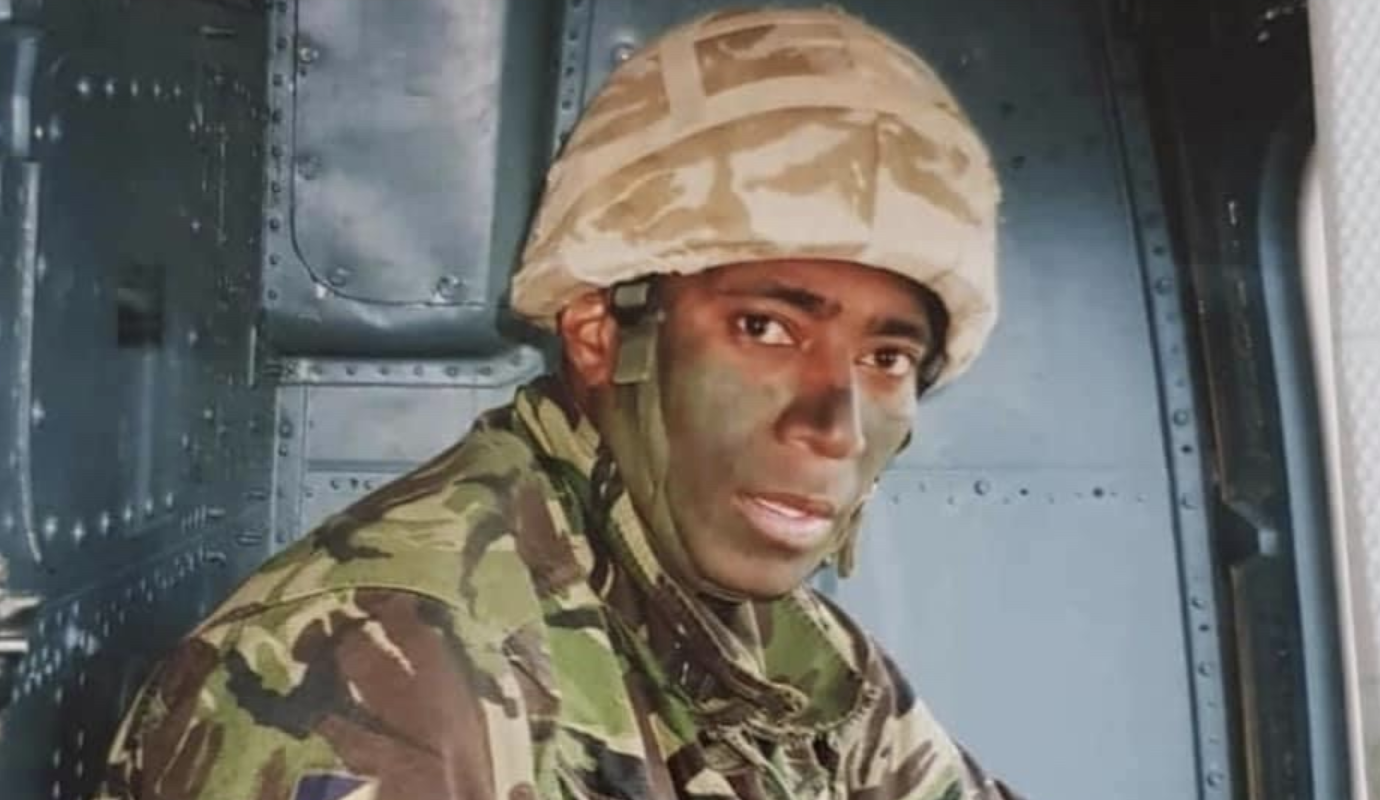 What are we doing about it?

Both the MoD and the Home Office have refused to accept responsibility for any of the issues raised and so Forces Online established Help The Commonwealth Veterans 8 (HTCV8) to raise awareness and funds to support the veterans’ legal claim.

The veterans and Forces Online are assisted by David McMullen, Campaign Coordinator.  David has previously successfully campaigned on behalf of veterans with the Chennai 6 campaign and contacted the Commonwealth veterans’ legal team offering his help and time for free.

We are calling on the UK not to forget the soldiers who came to the UK’s support when it needed them and to support the Commonwealth 8 now when they need our help.

Please donate what you can and share this page on social media, via email or WhatsApp with family and friends.

Find us on social media:

CALLING ALL SUPPORTERS - As many of you know we are off to the High Court Tuesday 1st December. Normally we would have had a demo outside court but it’s being done remotely because of Corona. So can we ask all supporters to post

Commonwealth Veterans take their fight to the High Court!
Commonwealth Veterans and their legal team in Anthony Metzer QC, Kenneth McQuire QC Sarah Pinder QC and Vinita Templeton will take the case to the High Court on Tuesday, 1st of December at 14.00.
We will be taking calls to discuss the case and doing interviews from 8.00onwards. We have already had considerable press interest and expect the morning to be busy. So please contact us to confirm coverage. The case will be heard remotely but some of the men will also be able to do interviews.
Help The Commonwealth Veterans 8 (HTCV8) is campaigning for Commonwealth veterans who served in her Majesty’s British Forces to be allowed to reside in the UK without having to pay extortionate application fees for permanent residence applications.
We ask you to join our fight to get these fees waived for Foreign & Commonwealth veterans and their families.
More than 196,000 people have now signed a petition calling for the fees waiver for Commonwealth veterans who wish to remain in Britain, the country they served. https://www.change.org/p/stop-charging-commonwealth-soldiers-to-stay-in-britain
In times of conflict, the Commonwealth countries have readily supported the UK and now we are calling on the UK public and media to remember their heroic efforts.
Please include a link to the crowdjustice fundraiser in any articles - https://www.crowdjustice.com/case/help-the-commonwealth-veterans/
For press enquiries please contact David McMullen - HTCV8:davemcmullen@hotmail.com Tel:0779 3818358

So today we attempted to hand in a 200,000 signed petition and I made the difficult decision to return my medals to @JohnnyMercerUK and the Office for Veterans Affairs! Unfortunately no one was willing to accept them. So they are still sat on the steps outside! Feel free to write to Johnny Mercer or to your MP if like us you think this is wrong - johnny@johnnyforplymouth.co.uk

You are all amazing!

Absolutely amazing effort! I asked for your help to get to £50,000 at 9.00 this morning and in less than five hours you’ve donated over £2,000. Thank you so much from myself and the rest of the campaign team and the men involved. We are all set for the court case on the 1st! Our amazing legal team are gonna smash it! But we couldn’t do it without all your support!

11 Days until the court case!

We have eleven days until the next round of the legal fight. Would be amazing if we could get to £50,000 before that date. We are just over £2,000 away. To that end could everyone please give this one last share across social media and donate what you can. Even if it’s a tenner. You’ve all been amazing to date and we thank you for your continued support.

We will remember them!

Help the Commonwealth Veterans 8 release charity music video on Remembrance Day directly calling Boris Johnson and Priti Patel to right the injustice against commonwealth veterans. As we remember the dead we also must remember the living also!

Many of you will have seen the real surge in coverage over the last few weeks and the support has been amazing. We are now at £44,000 of the £50,000 target.

When we set the target back in June it was to pay for all the expert witnesses and social worker reports. But also to provide a cushion in case we lost any of the claims and Home Office or MOD were awarded costs.

Sadly at the last hearing this happened when the judge declined the written application and managed to read 2000 documents in 2hrs which was impressive. The defence coincidently claimed their expenses to be £12,600, which at the time was just short of the £12,660 we had raised. What a coincidence hey!

The next case goes ahead in December and is an oral case. We are much more hopeful are superb legal team will blow this out of the water but the stakes are much higher and the other sides costs could be huge if we were to lose. All the legal team have been working on this case for the last seven years pro Bono and no one of the campaign team claims any money at all. So any donations will only go to fighting this for the men.

I wanted to write personally to each and everyone of you to thank you for the donations and explain why we are asking for a little bit more. We aren’t being greedy things have just changed slightly since the target was set as explained above.

Due to covid we will be forced to focus the campaign on social media rather than the small socially distanced demos we’ve been doing of late. If you can share posts we put out and write to your local MP and or Johnny Mercer letting them know your thoughts. johnny@johnnyforplymouth.co.uk

On behalf of the men, their families and all the campaign team thank you so much for your support.

Wow what a day!

On behalf of the guys and the campaign team thank you so much for all your donations. We’ve grown £6k in the last 24hrs and have countless reporters and news teams covering the campaign. We are truly overwhelmed by all the support thank you and please keep sharing and liking posts and tweets. If you aren’t already on our social media pls follow us here -

Lots of news to tell you all about. This week we launch our week long campaign.

Sunday we held a small socially distanced demo in London. We marched down to Downing Street and had planned to hand in the 155,000 signature petition but Downing Street currently won’t allow petitions.

Monday we went to visit Priti Patels office to give her some history lessons on the amazing things Commonwealth veterans have done for us. We also sent out letters to every MP in the country.

Today I have taken the heavy decision to return my medals in disgust at the way our government is treating our veterans. Particularly how commonwealth soldiers are being treated but also every one of us.

Good Morning Britain have contacted us to say they would like to do an interview. This could be either Thursday, Friday or possibly Monday. But we will keep you updated.

Already the campaign has come on leaps and bounds but we do need to raise more money. All of you are receiving this as you’ve already kindly donated money and I thank you for doing so. If you can take a minute to share the fundraiser across social media I will be forever grateful.

Thank you so much on behalf of all of us on the campaign team.

Petition handed in today in Fiji

Great clip from the demo in Fiji despite attempts by police to prevent it https://youtu.be/4T10R5cHB1c

Brilliant article today in the Guardian as we launch our legal fight!

Thank you all so much for your donations so far. The team here are amazed thank you. But please keep sharing we still have a long way to go. Here’s a video from Taitusi thanking you all for the support!

Thank you so much for everyone that has contributed. We would especially like to thank the person thats donated £1,000. Thats amazing and please get in touch with the page. Thank you also to everyone thats helped support us. It means so much to all those involved.

Slowly Slowly we are getting there but we need more!

Thank you all for your support. Please remember to go to the below links and invite all of your friends to like the pages. You don't have to do it individually but its really important you do it.

End of the first day of the campaign!

Well what a fantastic start to the campaign. Thank you so much for all those that have donated. Please, please, please keep sharing this with as many people as possible.