The following is a story from one of our members who chose to remain anonymous:

I grew up in Islington and moved to Tower Hamlets 5 years ago. I wasn’t really interested in nature and the enviro…

Where Will Your Money Go?

Funds raised will support the legal costs for members of Extinction Rebellion Tower Hamlets (XRTH), who were arrested for telling the truth about the ecological and climate catastrophe by engaging in non-violent civil disobedience against the British Government. Our arrestees are not wealthy people. They are teachers, students, engineers, pensioners, pub-managers, and charity workers; in short, they are ordinary citizens who took extraordinarily action to change our future for the better.  As a consequence of their brave choice, many of our local rebels will now have criminal records, disqualifying them from jobs and greatly affecting their futures. They will be charged court fees, lawyers’ fees, and fines. They could face higher insurance premiums and other financial consequences all while living in one of the most expensive cities in the world. To date more than 10 individuals have been arrested with many more committed to arrest-able action. Your donation will help our rebels continue the fight for urgent action on climate and ecological collapse.

Why Do We Act?

Rebels fight to protect their friends, their families, the larger natural world, and humankind. They know that urgent action is needed to address climate and ecological collapse. Our arrestees have written letters, signed petitions, and called representatives but have seen no meaningful action. Governments around the world, including the British Government, have known the consequences of rising CO2 emissions for over thirty years and still refuse to act. Arrestees have engaged in non-violent direct action because it is the only recourse left to them in the face of such criminal inaction.

We in Extinction Rebellion have declared ourselves in an open, non-violent rebellion against the British Government until it agrees to commit to and act towards carbon neutrality by 2025. We know this target to be absolutely feasible and necessary for a just climate transition. The UN Intergovernmental Panel on Climate Change estimates that the world must take drastic action to keep the global temperature from rising more than 1.5 degrees. However, a rise of 1.5 C is still catastrophic. Droughts, extreme weather, and sea level will all rise destroying ecosystems and destabilizing governments. In addition, a 1.5 C global temperature rise has the potential to lock-in irreversible climate feedback loops, leading to more extreme consequences. Therefore, it is imperative that the world collectively begin aggressive decarbonization. 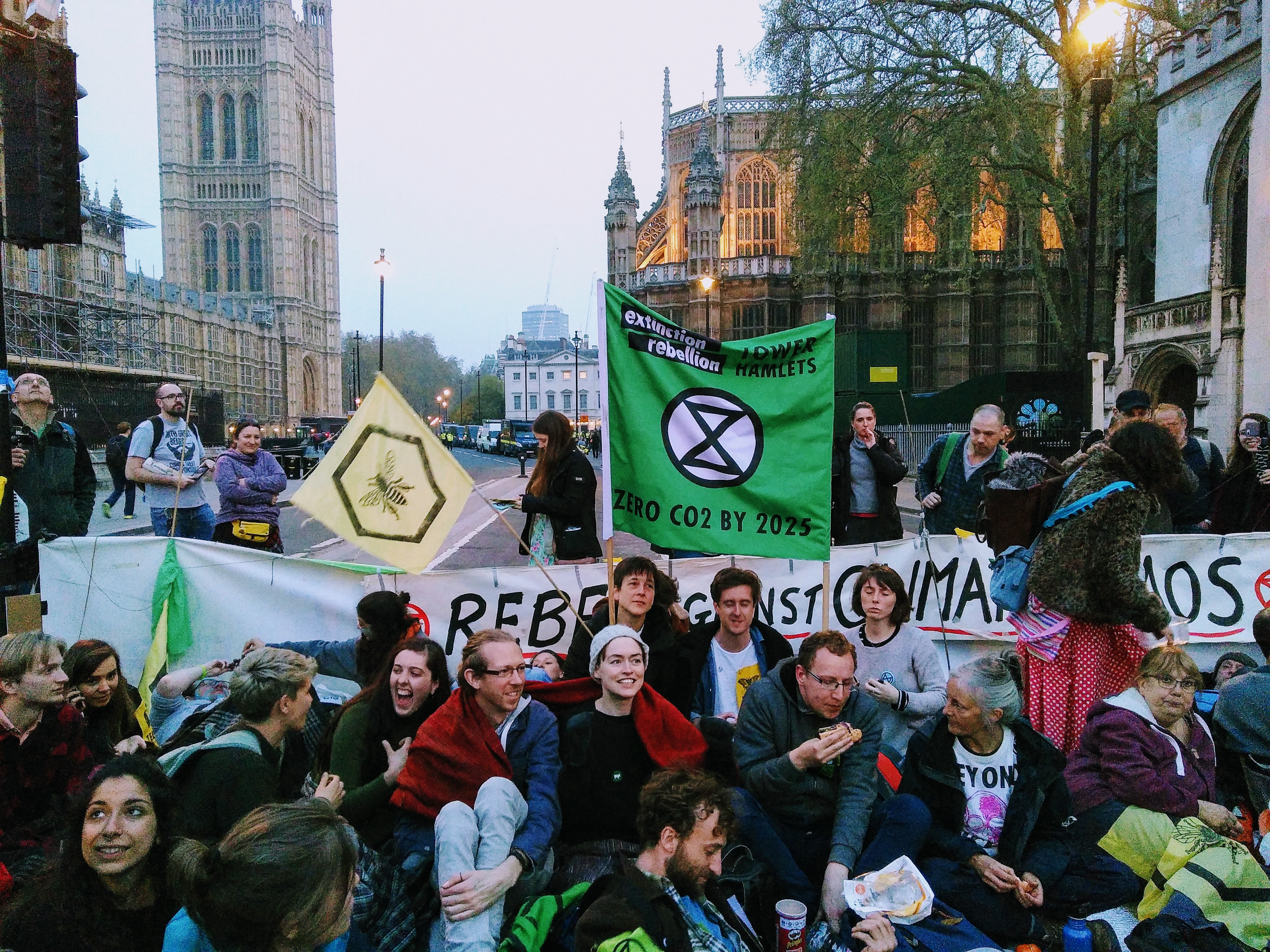 In addition to supporting the goals of the larger Extinction Rebellion Movement, XRTH focuses on action locally. Roughly 40% of Tower Hamlets residents live in areas with unacceptable air quality, and 37 Primary Schools and 11 Secondary Schools in Tower Hamlets are located in areas of pollution exceeding the legal limits. These conditions lead us to block the entrance to London Concrete in Bow to draw attention to the consequences of it's planned expansion.

Our affinity group has also been successfully in convincing our leaders to commit to becoming carbon neutral by 2025. This has inspired us to keep fighting, and your donation will help those who have given most to our cause.

We will be periodically updating our page with stories from our arrested rebels. Below are some personal statements from some of our arrestees: 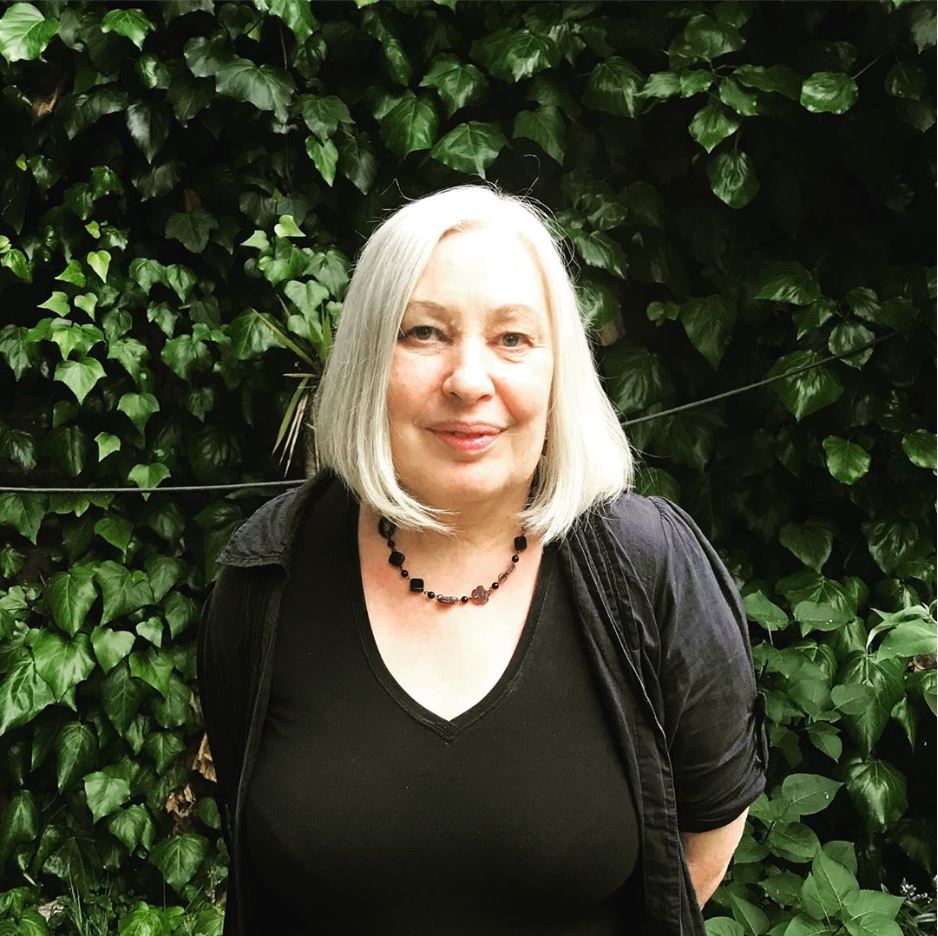 Hi, my name is Ruth Bennett I am a retired primary school teacher and have worked my entire career in Tower Hamlets. I was shocked when I first heard about the effects of pollution on the lungs of children (5-10% reduced capacity.) On learning that the Cement factory was opposite a primary and secondary school and that they intended to expand, resulting in 1000 truck journeys every 24hrs, I felt compelled to act.

I chose to lock on with a fellow protester, with my right arm through a pipe. We were there for for a couple  of hours before we were warned, arrested, cut out, carried to a police.I am slightly anxious about what comes next. I am happy to plead not guilty and go to trial, but am not the most eloquent or articulate of people and not sure how well I will fare in giving account of my convictions in court. 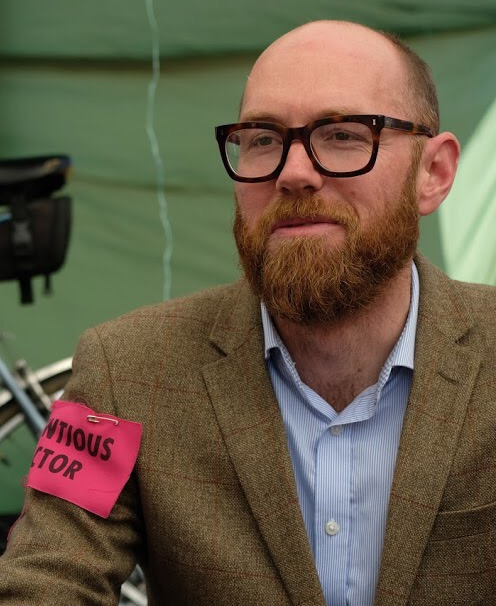 As a structural engineer I've been designing concrete structures throughout my 15 year career: bridges, buildings, a stadium. It's one of the core skills of my craft, my livelihood. I'm also taking part in this action to disrupt concrete production because we have to pause and recognise the harm it is causing both locally and globally; locally with the dust in the air our children breath and globally with the inextricable CO2 emissions involved which are destroying the living world.

As a consequence of his action Morgan will spend "a lot of my free time" preparing for his case. He will also be "working more to save up the money for legal defence fines" and be "taking more time off to attend court." Morgan will also have "more expensive insurance premiums."

The following is a story from one of our members who chose to remain anonymous:

I grew up in Islington and moved to Tower Hamlets 5 years ago. I wasn’t really interested in nature and the environment for most of my life, it was just an incidental feature of countryside walks. In the last few years I’ve started taking delight in birds, plants and nature’s incredible interdependency and getting involved in more green things in the borough. But I didn’t really think I could do very much to prevent climate change. After going along to the XR bridge blockades in November my ideas began to change. People there were contributing to ‘environmental action’ in myriad ways: speaking to the crowds on Westminster Bridge, talking to passers-by, sharing food, sharing pictures on social media, marching down the Embankment with placards. It inspired me.

I decided to be an arrestable in April for two reasons. Firstly, because I felt that the numbers of people getting arrested would have a positive effect on media coverage and political debate. Secondly, as a white, middle-class woman from a privileged background I felt it was something I could do when others aren’t able to take the risk.

I’m not going to lie, I found it quite scary getting arrested. Getting shouted at by the police, being stuck in a van for hours being filmed by my arresting officer, not being completely sure what I should or shouldn’t say. It took me a while to process those feelings afterwards. I’m still a bit anxious about going to trial and having to defend myself but I feel stronger now and I feel that it’s the right thing to do. I feel very supported by people in XR in Tower Hamlets and the global online community of people who care about the environment and climate change.