Extinction Rebellion Oswestry & Borders
Case Owner
This is an XR Oswestry & Borders crowdfunder to raise money for travel expenses and solicitors’ fees incurred from arrests as part of XR actions.
Funded
on 09th September 2019
£1,540
pledged of £5,000 stretch target from 28 pledges

Extinction Rebellion Oswestry & Borders
Case Owner
This is an XR Oswestry & Borders crowdfunder to raise money for travel expenses and solicitors’ fees incurred from arrests as part of XR actions.
Share on Facebook

We are XR Oswestry & Borders demanding governmental and societal change in the face of climate and biodiversity breakdown. Our members who span both sides of the Welsh/English border around Oswestry feel passionate about the aims of Extinction Rebellion.

In April, three of our rebels were arrested for their non-violent civil disobedient actions during London’s rebellion week.  All have been charged.

Our members are a diverse representation of our community.

It is not possible at this stage to project how much will be needed to support our arrestees, however we know it’s likely that each case will cost several thousand pounds in legal fees. We are starting with an initial target of £5000 which we intend to stretch as and when more of us are charged. The charges we face are for breach of Section 14, obstruction of the highway.

I consider myself to be a regular, law-abiding person; I’ve never been arrested before. I have one child and we live on a mountainside in Wales – beautiful. I am lucky.

A catastrophe is about to hit us – all of us – me, my son, you, everyone including all of us in this room; and it has already begun.

My government is failing to protect us and has failed to respond appropriately to the seriousness of climate and biodiversity emergency.  Therefore it is my right, my duty, to do something about it and ask for its help.  I too have failed over many years through conventional methods to get the government to respond.

What else can I do? I am desperate.  I will not do nothing.  I do this for all of us.  I’m going to get hurt anyway.

Nothing else matters.  There is no liberty without life. 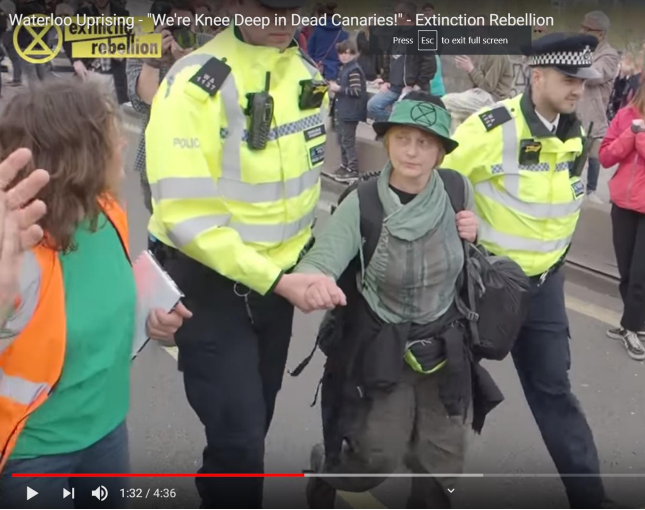 Ophelia (green jumper & orange high viz) and Lesley (flanked by two police officers) as Lesley gets arrested on Waterloo Bridge, live on TV! (Ophelia went on to get arrested later in the week)

I am a gardener living in Powys, the Green Heart of Wales.

I live in nature yet nature is departing. Our fields are silent and the sky is empty. Drought and flooding are now commonplace. There is a darkness looming I can no longer ignore.

This government prioritises economic growth over life itself. Condemning the British people to inevitable societal collapse within the lifetimes of our children.

I declare this government criminally negligent and illegitimate. My actions in London are proportionate in response. Nothing could be more urgent or terrifying.

I plead not guilty 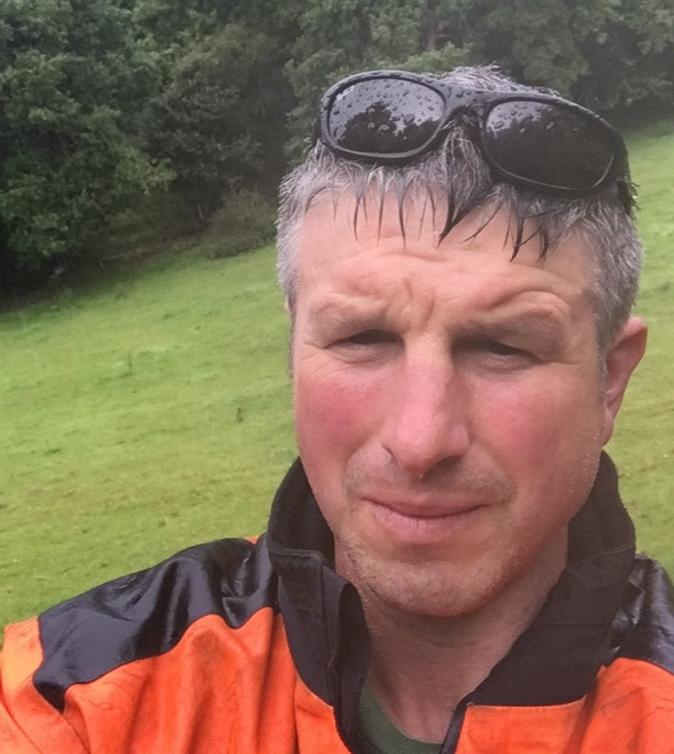 My name is Morgan Dicks, I am a 49 year old tree surgeon and tree planter, from Llangadfan near Lake Vrynwy. I have lived there most of my life. I have roamed its hills since I was a child and have always worked outdoors. I have witnessed at first hand the relentless degradation of our beautiful environment.

96% of the worlds leading scientists and anyone with open eyes can see we are entering a catastrophic climate and environmental emergency, yet the Westminster government is miserably failing to take any tangible action even to tell the truth to the public - let alone bring in any emergency legislation. Indeed, by passing the third runway at Heathrow, the Westminster government sent a clear message to big business and toxic capitalism- that its business as usual.

When I got arrested at Oxford Circus......In my memory I walked away with that policeman down a beautiful country lane, on a glorious spring afternoon in Llangadfan....under a big sky...... there were campions, herb robert, stichworts, celendines and primroses in the hedge and maybe an early purple orchid too.......I heard bird song and grasshoppers......the scent of meadow sweet hung heavy in the air........the birds sang and the world was charged with the full wonder of a Welsh spring.....

Its not an unpleasant process to make our beautiful welsh voices heard....

Lets try and stop the machine for a while and force this government to take action and recognize we are in a cataclysmic climate emergency and facing terrible mass extinctions and barbarism.

Unless we stand together and do something about it, our children and grandchildren will experience terrible climate events leading to societal breakdown, chaos and the law of the mob.

Yolo Williams, David Attenborough and the worlds leading climate scientists are not wrong. If you love ancient and undefeatable Wales and Montgomeryshire....make sure you let the Westminster government know.....the next Extinction Rebellion protest is in October....😊