On October 31st 2018, Extinction Rebellion declared an open rebellion against the British government for its failure to inform and protect its citizens from the approaching climate and ecological catastrophe.

Since then, rebels from across Brighton, Hove and the surrounding area have taken direct action because We Want to Live!

The money donated to this fund will help ease the burden of legal costs for our local arrestees, some of whom have shared their powerful stories below, and empower those making the decision now to act in the future.

Please donate anything you can, and share this page widely with your friends, family and on social media.

If you are a rebel who needs access to this fund, please email xrbrighton-arresteesupport@protonmail.com 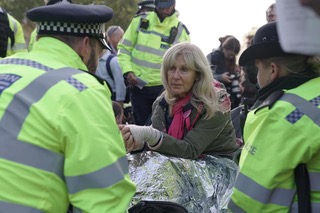 I’m a mother, grandmother and retired head teacher. Being arrested was not something I undertook lightly. Climate scientists tell us we’re in an emergency and running out of time so, by taking action at the heart of government, including being one of many arrested, my hope was to encourage government to ACT NOW.

I and twelve others were told we were to be arrested outside Downing Street mid-afternoon on 8th October, police then set up barriers to isolate us from others. Hours later we were told that we would not be arrested until morning and police suggested we leave telling us it would be an uncomfortable, wet night under the eye of HD CCTV cameras. Realising we were in a strategic location, we politely declined.

They were right, we were totally unprepared, having no suitable clothing, food, water, shelter or toilet facilities - we learned quickly from more experienced rebels that night...!! After no sleep I confess I felt vulnerable when police approached the next morning but some rebels offered support from behind the barriers by singing throughout our arrests - an emotional experience.

I was eventually released from custody at around 7.00pm miles from base after a long, uncomfortable day.

Would I do it again? Yes, in fact I did a week later! It felt, and still feels, immensely important that ordinary people are prepared to be arrested, detained and charged to highlight the threat we face. My arrest generated interest from friends, acquaintances, local and national press - that alone felt a worthwhile result but, as a bonus, I later learned that, hearing of our overnight standoff, people returned and held Whitehall for another two days... 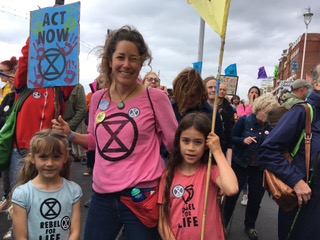 Charged with ‘Willful obstruction of a highway’. Arrested under Section 14 outside the Cabinet Office in Whitehall, Weds Oct 9th 2019.

At this moment the health of all life on our planet hangs in the balance. The consequences of inaction are real and devastating. I am scared. I feel compelled to speak out and do all I can to bring the climate emergency to the urgent attention of those with the power to create real change in society - even if it means I will be given a criminal record.

I know lots of people close to me don’t agree with my choice to take a week of annual leave from work to sit non-violently in the road and peacefully protest with Extinction Rebellion. But I believe our government is not acting urgently enough on the climate emergency, and their decision to criminalise and prosecute peaceful protesters like me is wrong.

Being arrested for my beliefs is a serious decision I do not take lightly. I take full responsibility for my actions and I am prepared to pay the price.

I wish to bring the climate emergency under scrutiny for the sake of my two small children, all the plants and creatures in the natural world, and in particular those who do not have the privilege of a voice of their own. This is an emergency and we must all act now. 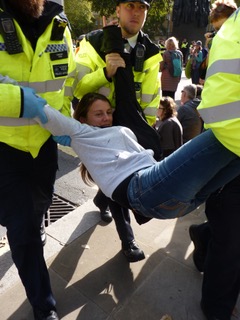 As I lay in the middle of the road outside Downing Street awaiting my imminent arrest, surrounded by police, I looked up at the blue, blue sky. The rain had finally stopped and, as I enjoyed the sun on my face, one of London’s famous parakeets flew overhead. I will never forget how peaceful I felt in that moment, in the eye of the storm. Even as the electrical saws shrieked, cutting our fellow activists out of their lock-on devices. On the other side of the police cordon, a circle of XR activists drummed and chanted their support for the eight of us locked on inside. I was attached to a Portuguese woman with whom I had formed the kind of bond that only comes from peeing together on an immaculate government lawn in broad daylight with your hands chained together in a metal tube. We’d danced like that too, the night before, at the improvised street party that had taken place at Whitehall, against a backdrop of riot vans.

We’d held the Whitehall site for two days and two nights, targeting the heart of government to demand a citizen’s assembly on climate change. In the morning of the third day, the police had swooped in and cleared the site of all tents and non-arrestable activists, leaving eight of us in the middle of the road, chained together in pairs, doggedly refusing to move.

To explain why on earth I had put myself in such a situation, I would ask you to imagine this scenario. You’re on a bus. For some reason the driver has decided to drive directly towards a wall at a speed that would destroy the bus and probably kill all the passengers onboard if he crashes into it. The driver has ignored all polite requests to alter course. Instead, he is engaged in an endless debate with a colleague about the design of the bus. In another situation, the debate might be important, but right now it’s pointless because soon the bus will be destroyed. Most of your fellow passengers are too afraid to acknowledge the impending crash and are looking at their phones, even though their kids are also on the bus. Only you and a couple of friends are watching in horror as the wall comes closer and closer. You realize that the only way to save the bus and its occupants is to grab the wheel from the driver. It will cause some disruption, but it’s that or everyone dies. What do you do?

Now imagine that it’s not a bus but a vessel containing all of humanity, all of human progress, millions of species, in fact the only known life in the universe. Surely there is a moral obligation to try to prevent that crash?

In fact, no imagination is required, because this is our current reality. World governments and corporations are speeding us ever faster towards the fatal collision of environmental catastrophe. All polite requests for them to alter course, all the marches and petitions over the last 30 years, have achieved nothing. I believe we have no choice but to disrupt their genocidal trajectory using the only means available to us: peaceful mass civil disobedience.

I’d been prepared to be arrested, had given it a lot of thought, had built it up so much in my mind, but in the end—as is so often the case - I found out that there was nothing for me to fear. This isn't always the case.

Around the same time that I was living it up with hot tea and porridge in my cell, a young indigenous man in Ecuador was being thrown off a bridge to his death for doing exactly what I had done: taking to the streets to peacefully protest. As I ate my porridge, I reflected that it’s the moral obligation of those of us who can, often those in countries with less brutal police forces, to carry out the mass civil disobedience that is required to avoid a mass extinction event.

The Green Party MP Caroline Lucas has said that “In the future, it won’t be those peacefully blockading bridges or blocking roads that history judges badly. It will be those who shut their eyes and blocked their ears. The brave XR activists taking nonviolent action to protect the planet on which we all depend for our survival shouldn’t be arrested and charged. They should be applauded and they should be heard.”

But XR activists are being arrested and charged—and they are being fined. By definition, activists dedicate their time to pursuits other than making money, and many will struggle to pay their legal costs. I know this was one of the primary concerns for me, when I was deciding whether or not to put myself up for arrest.

So, if you are not in a position to blockade a road or a bridge, please consider paying the legal costs of someone who is.