A bad fortnight for the NHS

Last week an enquiry exposed the dishonest hounding and victimisation of a diligent nurse, this week the actions of a Trust and the GMC for failing an overstretched doctor rather than recognising the…

My name is Dr Kevin Beatt. I have spent almost 30 years as an NHS Cardiologist and clinical lead developing new services in the NHS. Six years ago, I was fired for raising safety issues in order to protect patients.

The unanimous judgement in the Employment Tribunal and the Court of Appeal was that I was fired for being a whistleblower.

The Croydon NHS Trust refused to accept that the concerns I raised amounted to whistleblowing. While proclaiming to the public that the service was safe, and branding me as a “troublemaker”, the Trust was aware from reports made by staff that this was far from the truth.

Since I was fired, I have been forced to fight them every step of the way.

Despite the unlimited legal resources available to the Trust, an Employment Tribunal found in my favour and unanimously decided in October 2014 that I was unfairly dismissed because of whistleblowing. Despite the Tribunal finding in my favour almost 4 years ago, I have yet to receive any acknowledgement that the Trust got it wrong or any compensation from the Trust. Instead, the Trust has forced me to fight them in multiple financially draining appeals and there is now no court left in the country in which the Trust can appeal the judgment.

Like many whistle-blowers, I have unceremoniously had my career cut short and my reputation destroyed. Now, I’m fighting to hold Croydon NHS Trust to account for the way they have treated me and other employees over the last six years and to show other employers that there are consequences for unfairly firing employees who speak out. But to do that I need your help to raise funds for my remaining legal costs.

Please contribute and share this page to help hold NHS Trusts to account and to support my efforts to gain fair compensation for my lost earnings and the impact on my career.

Working with a top legal team of solicitors from Linklaters, who have acted for free, and counsel Harini lyengar and Daniel Stilitz, who have worked for free or for significantly reduced fees, I was able to take the matter to an Employment Tribunal hearing, an Employment Appeal Court Hearing and to the Court of Appeal. Despite the other side’s unlimited public funds, the Courts determined in a series of damming judgements, that my employer had failed to comply with the law.

On a number of occasions, the evidence provided by the Trust management was criticised for being, “vague and unconvincing”, “unreliable”, “inconsistent” and providing evidence to convey a, “false impression”.

The Trust attempts to overturn the judgement have failed.

The judge at the Court of Appeal clearly stated: “I do not believe that there was any error of law in the Tribunal’s conclusion” In doing so they put an end to the appeal process, as an attempt by the Trust to appeal to the Supreme Court was refused.

How much am I raising and why?

This has been a long fight and while I have been fortunate with support for legal costs to date, the length of the legal challenge has, as the Trust likely intended, left me in a difficult financial position. I still need to go to a 10 day “remedies hearing” and need support to help pay my barrister.

The process has taken 6 years so far and may take another 2 years, but we are determined to see it through as I believe the NHS will not survive unless we can encourage NHS institutions to act with integrity, so we can better protect patients and allow NHS staff to properly raise concerns without the fear of retribution.

Please contribute what you can and share this page on social media to show that whistle-blowers do not only deserve protection but that employers should also be held to account when they treat those that speak out in such a devastating manner.

A bad fortnight for the NHS

Last week an enquiry exposed the dishonest hounding and victimisation of a diligent nurse, this week the actions of a Trust and the GMC for failing an overstretched doctor rather than recognising their own failures. Help take action against those that abuse our NHS. …

The unhealthy relationship between the GMC the NHS and its Lawyers and the easy ability to deceive patients and the public with impunity undermines any legal process or proper enquiry. It is extraordinary that Dr BawaGarba should be investigated by the police and and prosecuted by the Crown Prosecution Service for a mistake made under very difficult working conditions when similar cases are covered up by Hospital management on a regular basis. Again last month the local Coroner recognised that Croydon NHS Trust was submitting false information to protect the reputation of the Trust.  We have spent 7 years exposing this behaviour and still it continues and no-one is held to account.  With your help we will continue to work to eradicate this culture of dishonesty, so evident in so many cases.  Please make you friends and colleagues aware of this appeal and many thanks for the continued support.

Thank you all who have continued to support this campaign so generously, particularly those that have been victimised and are least able to contribute.

Since starting this campaign the appalling details of the way patients were treated at Gosport have been made public. By suppressing the information for decades lessons were not learnt and those that might have spoken out about similar injustices in other institutions have learnt to keep quiet.

The suppression of the details and investigations are an affront to the public and NHS staff. The details of many similar cases have been known to the NHS executive and successive Secretaries of State for Health who have done nothing effective to support individuals who raise concerns to protect patients. Jermery Hunt has been aware of the details of my case for the past 4 years and continues to sanction the use of hundreds of thousands of public funds to support dishonest managers and their institutions.  We do not need more inquires similar to Mid Staffordshire, Morecambe Bay, Connor Sparrowhawk, Southern Health and others. We know what the problems are we now need a Health Secretary who will take action.

Deceiving the Courts through non disclosure

The CPS has come out and apologised for deceiving the courts. When is the longest serving Health Secretary going to apologise for the distress cased to patients and NHS staff by illegal witholding documents by NHS institutions and their expensive lawyers. Jermery Hunt has full knowledge of the systemic deception and does nothing effective. see @drbeatt 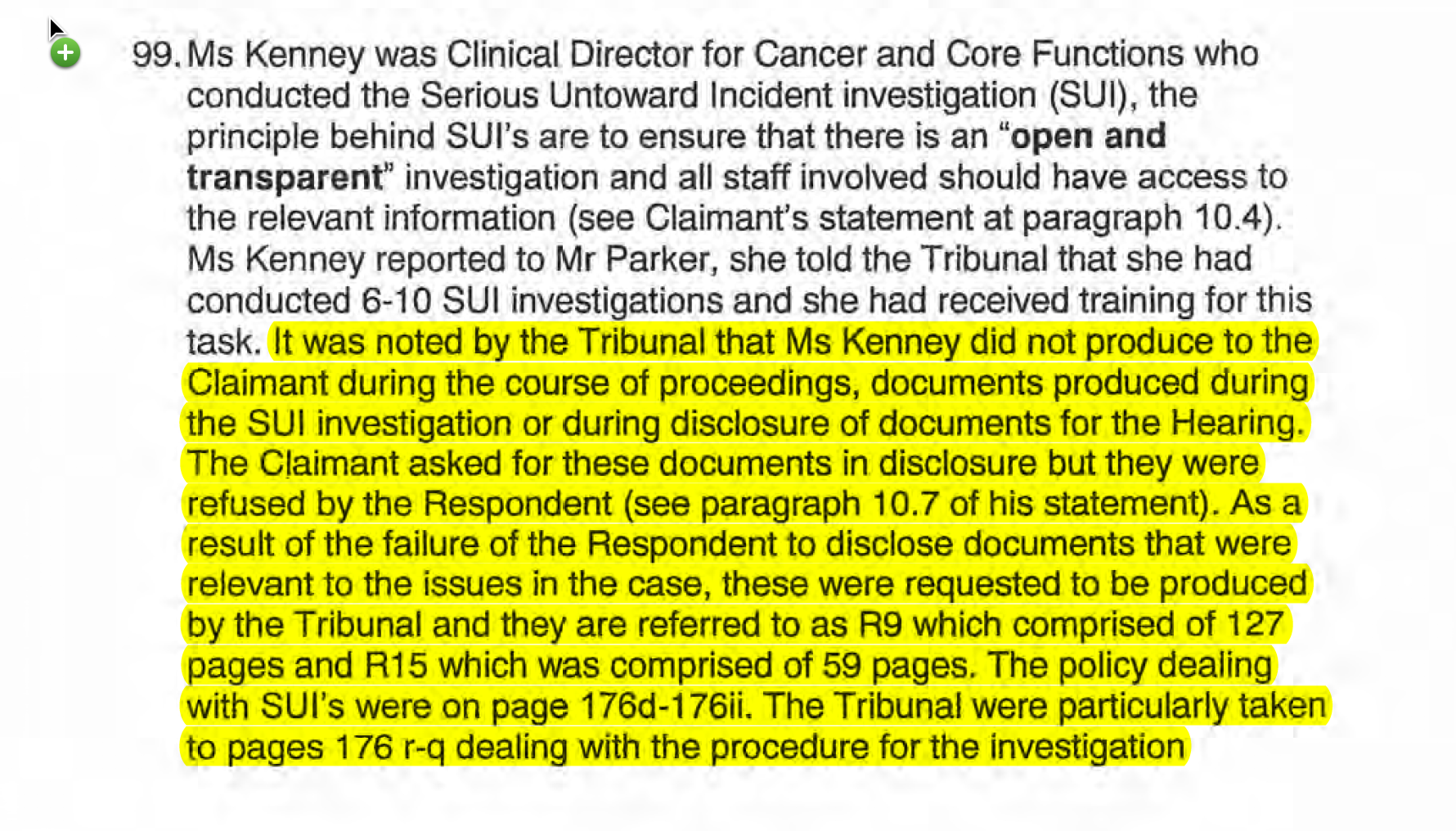