Chris Day
Case Owner
I am a junior doctor and it has been incredibly hard but incredibly rewarding to win back whistleblowing protection for junior doctors. I am pleased that I will finally get my case heard after 4 years
Funded
on 13th August 2018
£15,895
pledged of £50,000 stretch target from 459 pledges

Chris Day
Case Owner
I am a junior doctor and it has been incredibly hard but incredibly rewarding to win back whistleblowing protection for junior doctors. I am pleased that I will finally get my case heard after 4 years
Share on Facebook 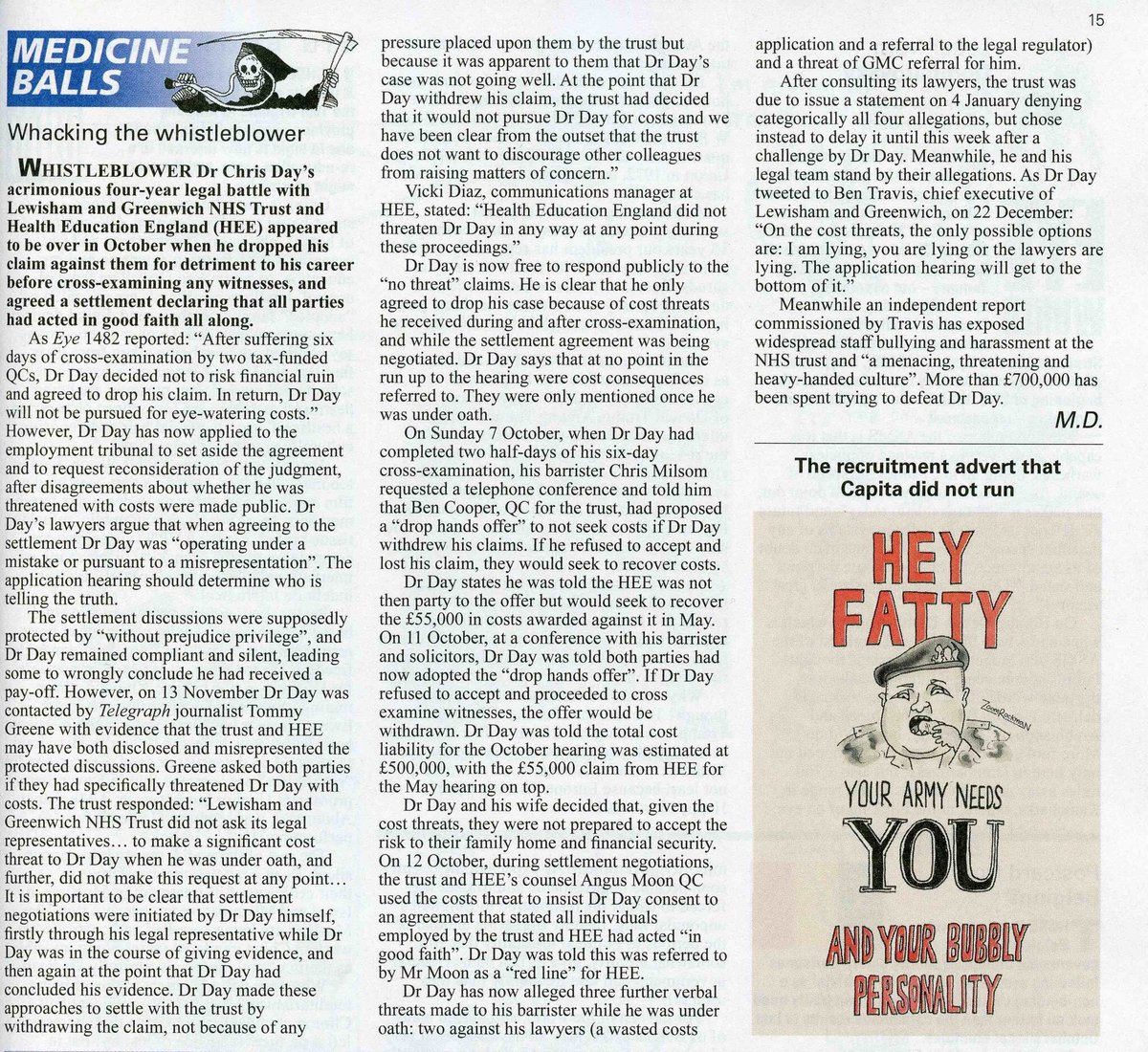 We are very grateful to Private Eye and Dr Phil Hammond for the coverage that has been given to our case over the last few years. The November artic…

What if I were to tell you that weeks after the Francis Report into the failings at Mid Staffs, in order to stop my whistleblowing case being heard, well over £100k of taxpayer money was spent arguing junior doctors and agency workers out of whistleblowing protection?

What if I were to tell you the former Secretary of State for Health, the Medical Union (the BMA) and the Medical Regulator (the GMC) knew about it and were all in on it?

You would probably think I was mad, but what if I were to also tell you that last year we won whistleblowing protection back for all junior doctors and 800,000 agency workers in the Court of Appeal. Then in May this year my team caused a Government agency to concede a 4 day preliminary hearing at the last minute and to pay us £55k back in legal costs.

My name is Dr Chris Day and I am a junior doctor that lost my career as a result of raising safety issues about an understaffed Intensive Care Unit in South London. After a 4 year battle it is now time for my individual whistleblowing case to finally be heard for the first time this October. Health Education England have requested an incredible 21 days for the hearing.

The Secretary of State for Health

In June 2017 at the NHS Confederation Conference, I asked Jeremy Hunt, the then Secretary of State for Health about the games that have been played at huge expense to the taxpayer to stop my case being heard for over 3 years.

Mr Hunt was named as a respondent in my whistleblowing case and instructed the Treasury Solicitor to file a response to my comprehensive grounds of claims in 2014. I received his response. The Department of Health have attempted to deny the fact that Mr Hunt instructed solicitors in the case to a journalist and also that he had knowledge of the “facts” which he plainly did as a respondent.

In May this year I went to meet Jeremy Hunt with my Solicitor Tim Johnson at a meeting arranged by Norman Lamb MP. The details of that meeting can be read here.

Why a 4th Crowdfunding Campaign?

I am only still standing as a result of all the support we have received from over 4,000 people and my fantastic team of lawyers. I am truly grateful and proud of what we have been able to achieve together.

I have spent over 3 years fighting to win whistleblowing protection back for all junior doctors and their patients. This has taken the majority of what we have been able to crowdfund over the last 3 years and a lot of energy! The crowdfund has also had to be spent seeking legal advice and intervention against organisations such as the BMA and GMC that have attempted to obstruct our attempts to safeguard junior doctor whistleblowing protection.

I now have to fund a 21 day hearing so that all the facts of my individual whistleblowing case can finally be heard properly and the relevant witnesses cross-examined.

I summarised my case at 'Junior Doctors Getting Heard', an event hosted by Tim Johnson/ Law with a panel of other junior doctors and the former junior doctor and author Adam Kay.

My NHS whistleblowing case was lodged in October 2014. The case involves an understaffed Intensive Care Unit in South London. My claim is that I lost my career and suffered other detriments on account of raising serious safety issues when I was working there. The case has been prevented from being heard by a court or tribunal for 4 years. However in May 2017, I won the right in the Court of Appeal for the case to be sent back to the Employment Tribunal after it was struck out in February 2015 without a hearing.

I have been able to crowdfund £240,000 on the innovative access to justice platform Crowdjustice after my union, the BMA, withdrew legal support from the case several days before a legal deadline. The successful crowd funding campaign has put a spotlight on certain important issues that the case raises. 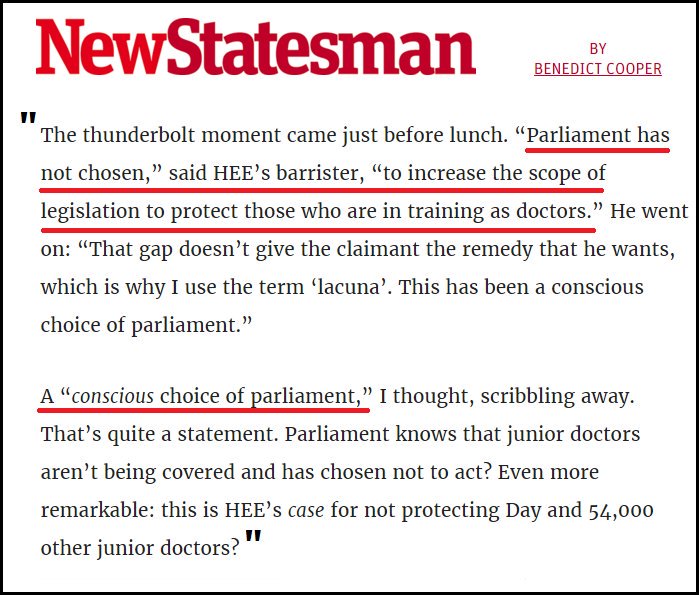 The General Medical Council, after initially attempting to deny the problem with whistleblowing law caused by my case finally acknowledged the danger to patient safety associated with arguing junior doctors out of whistleblowing protection.

“We recognise that a level of concern now exists among doctors in training in England about whether they are adequately protected in their relationship with Health Education England (HEE), and that, as a result, some may feel less secure about raising concerns for fear of suffering detriment to their career.”

My whistleblowing case has been covered in the;

Mail on Sunday “The dedicated NHS doctor they tried to gag then destroy.”

And in the Mirror;

NHS chiefs spend £100,000 on failed bid to stop whistleblowing doctor having his day in court

NHS chiefs forced to hand £55,000 to whistleblowing doctor they tried to stop having his day in court

The case was also covered by ITV News at Ten. More media coverage can be found here.

My trade union, the BMA, initially supported my case and their law firm, Gateley, were preparing proceedings against the Trust and Deanery/HEE. The BMA insisted that the NHS and HEE carry out formal investigations. Suddenly, five working days before the claim had to be submitted and before the delayed Trust and Deanery formal investigations had reported, the BMA withdrew all legal help from my case. Around the same time my BMA Senior Industrial Relations Officer went on “special leave”. I have since learned from a transcript of a BMA Council meeting that Dr Mark Porter, the former BMA Chair, stated that he had been dismissed for gross misconduct. It is also the case that the record the same BMA representative prepared of a crucial meeting apparently no longer exists. The Legal Ombudsman made several criticisms of Gateley but stated that they did not have the power to investigate any action of the BMA and in particular the circumstances in which my BMA rep was removed from my case and the BMA.

Several months after pulling out from my individual case, the BMA made a separate decision not to support our now successful appeal process to safeguard junior doctor and agency worker whistleblowing protection.

I find it difficult to comprehend why the NHS has spent taxpayers’ money to try to argue junior doctors out of whistleblowing protection and, secondly, why the main doctors' union decided not to oppose this.

There have been several brave BMA Committee members that have attempted to get answers from BMA leaders about my case as this blog explores. This BMA Council transcript exposes the former BMA chair, Dr Mark Porter providing false statements about my case to BMA Council.

GP Dr Bob Gill has produced this video summarising the BMA’s actions in my case.

Given how much resistance there has been in order to prevent my case being heard, it is vital, now that we have secured a hearing, that we have the resources to ensure the right people are held to account for this situation.

I am grateful to all the lawyers that have helped me including all at Tim Johnson/Law, James Laddie QC, Thomas Linden QC and Chris Milsom. I am also grateful to Public Concern At Work and Crowdjustice for their support. I would like to thank all our supporters on Crowdjustice as you have given us so much more than money.

For a timeline of events and key court documents surrounding my case click here.

We are very grateful to Private Eye and Dr Phil Hammond for the coverage that has been given to our case over the last few years. The November article and others can be read here.

The Telegraph Article and letter to the Respondents referred to in Private Eye can be read here. 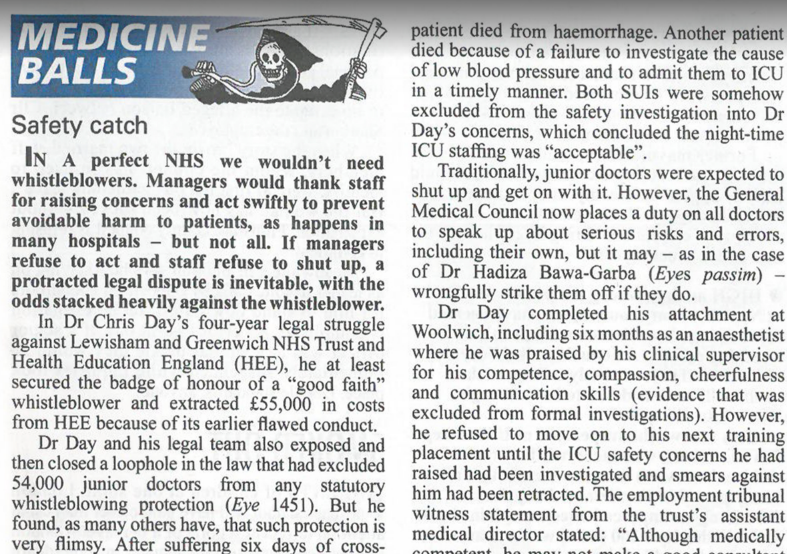 We have agreed the following statement:

After six days of evidence at the Employment Tribunal brought by Dr Day against Lewisham and Greenwich NHS Trust and Health Education England it has been agreed by all parties that:

We would like to thank you for your encouragement and generosity. We are very proud of what we have been able to achieve together with our supporters on Crowd Justice.