by London Parks and Gardens Trust

Our day in court has been decided

We have just heard that our Judicial Review will take place in the week commencing 7th September. This will mean that we should know, before it happens, who will be the ultimate decision-maker at the…

A wicked land grab in one of London’s most precious areas of green space, Victoria Tower Gardens, is going on right under the nose of Parliament. We want to see any decision about the proposed Holocaust Memorial and Learning Centre in this small historic park next to Parliament made lawfully.

The Government, fearful that its application to build this overwhelming structure here would be rejected by Westminster City Council (which it has been), has “called in” the project to decide for itself, over-ruling if need be the recommendation of the Inspector running the necessary Planning Inquiry.

We say this cannot be right. There is a massive conflict of interest.

These and other urgent questions hang over the Government’s plan to build a large Holocaust Memorial and Learning Centre in Victoria Tower Gardens (see plans below).

We, the London Parks and Gardens Trust (LPGT), have launched a Judicial Review of the decision-making process being used by the Government. We hope it will be considered urgently, prior to the scheduled Planning Inquiry starting in October, so that the Courts can ensure that a decision will be reached lawfully.

Our aim, of course, is to save the threatened historic green space for continued use as a freely enjoyed public park, but to do that we have to challenge the way that the process is being managed by the Ministry of Housing, Communities and Local Government (MHCLG), and we need your help.

The legal point is that it is unlawful for decisions like this to be taken without institutional separation that assures that the decision maker has complete independence from any influence by the project’s promoter.

Natural enough, you would think, but the Government has so far rejected this requirement and is relying on elaborate bureaucratic measures which it says will give the Minister of Housing adequate separation from influence by the Secretary of State and the rest of the Government.

The Government proposes to build a national Holocaust Memorial, with underground Learning Centre, right in the centre of a small, historic, central London park, Victoria Tower Gardens. The proposal would breach planning policy and statute relating to the protection of green space and heritage. It would take up a large part of the park and change its character completely, limiting access and turning what is currently public space for enjoyment and relaxation into a ticketed venue for sombre reflection on the Holocaust.

We are in no way opposed to the construction of a Holocaust Memorial and Learning Centre in a space that can do it justice, but Victoria Tower Gardens is wholly unacceptable and we are strongly opposed not only to the idea but also to the way in which the Government has advanced its proposals. Besides the decision-making process, concerns include:

Why does this matter?

The Secretary of State for MHCLG, currently Robert Jenrick, is the applicant in this planning application. Now that the application has been ‘called in’ by his department, he has recused himself, given the blatant conflict of interest that would arise if he made the decision on his own application. Instead, the decision will be made by a member of Mr Jenrick’s team, the Housing Minister Christopher Pincher. However, it is also absurd to suggest that a Minister can act any less partially in relation to a planning application which has been made by his own boss, and where his own department is the project sponsor. Robert Jenrick, MHCLG and the Government as a whole, have consistently ignored any and all criticism of this project and the damage it is likely to do to the environment, surroundings and amenity value of the park.

We have no choice but to try to stop the project from being steamrolled through.

What are the legal steps we are taking?

We have asked for a Judicial Review of the Government’s conflicted process - which amounts to granting planning permission to itself. We say the Government has failed to put in place rules which it is obliged to by law to ensure the separation required.

We are London Parks and Gardens Trust, a small charity - details at www.londongardenstrust.org . For over 25 years we have been dedicated to championing historic green space across London for the benefit of all; we are part of a national network of County Gardens Trusts affiliated to the Gardens Trust, statutory consultees in the planning process for historic designed landscapes. Our mission is to register the historic importance of parks and other green spaces and ensure that these are protected from encroachment for the benefit of all.

Both Richard Buxton Solicitors and Counsel have agreed to progress the case for us under heavily discounted fee arrangements because of the public interest. We have an initial funding target of £5,000, though we will need more, to pay for Court fees, legal fees, and for any losses or liabilities which may arise from this case.

The effects on the gardens: 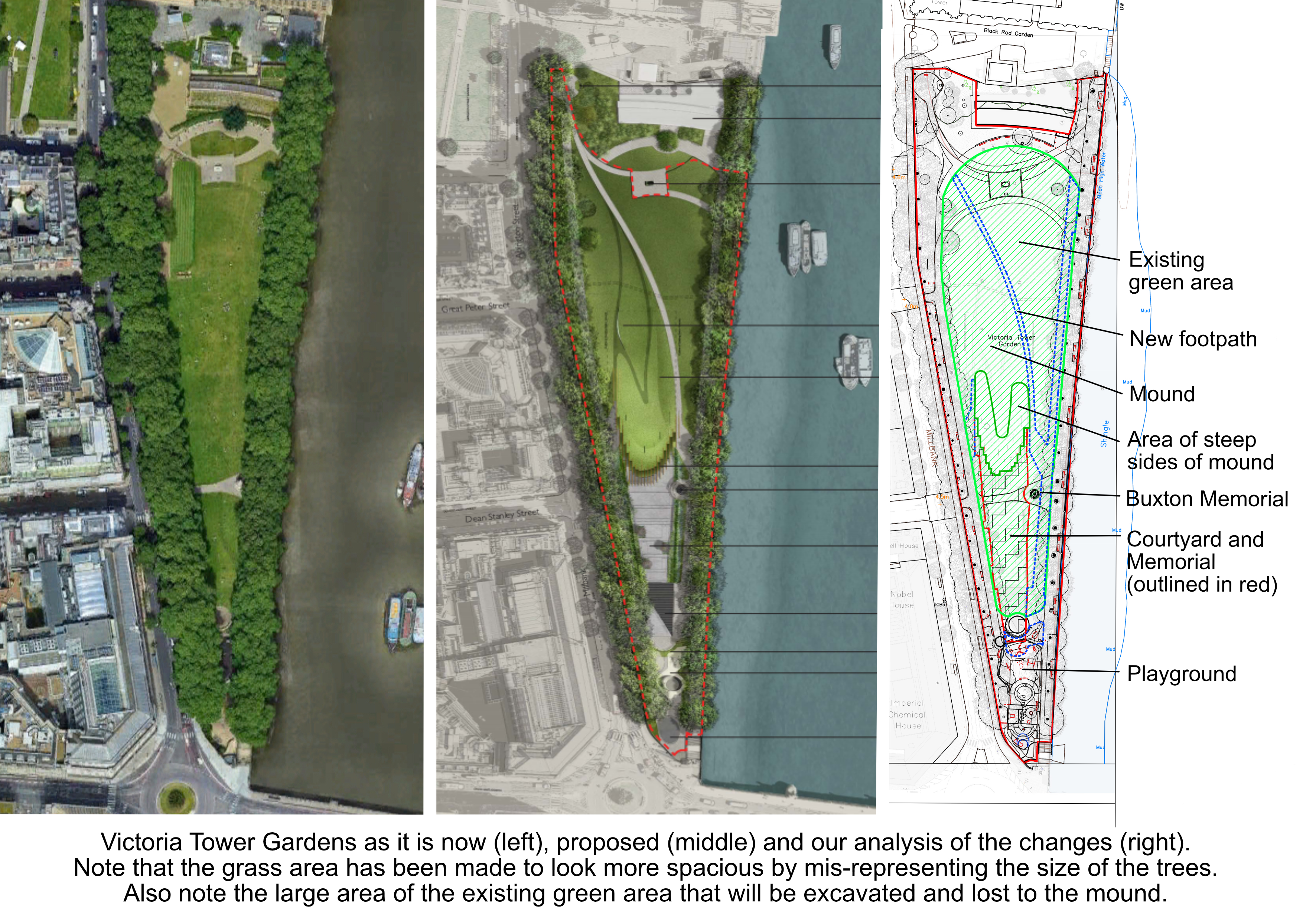 Loss of their intrinsic character from the reduction in green space,  overwhelming numbers of visitors, and the security required around the gardens as well as the Memorial itself.

A reduction in the grass area of about 30% (and 36% if the steep slopes of the mound over the 'underground' Learning Centre are included).

A reduction in the size of the children's playground.

Damage to, or death of the trees due to severing the roots and hydrological changes.

The gardens will be divided visually and functionally by the Memorial and mound.

The gardens, which are the largest open space for a big local population, will be mainly inaccessible for the 30 month duration of construction.

Our day in court has been decided

We have just heard that our Judicial Review will take place in the week commencing 7th September. This will mean that we should know, before it happens, who will be the ultimate decision-maker at the Planning Inquiry in October/November.

We hope that this decision on Victoria Tower Gardens will be taken out of the hands of a representative of this Government, whose members had already collectively committed to building this Memorial and Learning Centre in this popular small public park before Westminster City Council had decided on the planning permission.

We want to make sure that the person or people making the decision are wholly impartial.  But to get to this stage we need lawyers to represent us, and money to pay the lawyers. We have had contributions from 123 people so far, one tenth of those who have seen our Crowd Justice page.

We have had wonderful coverage in recent weeks in The Sunday Times and Private Eye amongst other print media, but we need your help.  With your support and those of your like-minded friends we are sure this will help to swell our funds. If you can pass this plea on to all your contacts, via Twitter, Instagram, Facebook, LinkedIn or anywhere else we would be very grateful.