We have now had the initial responses to the pre-action 'letter before claim'  from the Government and NHS England. Unsurprisingly, both focus on technical legal arguments why they …

Thank you for visiting my crowdfunding page. I have personal experience of the dysfunctional and failing NHS Continuing Healthcare (CHC) system. My mother had severe dementia and also suffered from numerous other serious medical conditions. After a gruelling two year battle, the NHS eventually agreed to fund her healthcare. On behalf of those who have been less successful and unlawfully denied CHC funding, I am now taking legal action against the Government and NHS England to expose this scandal and to hold them to account.

There is extensive evidence to show that in the last five years, tens of thousands of old, ill and vulnerable people have been unlawfully denied healthcare funding. The total level of unlawful financial deprivation is staggering – possibly as high as £5 billion.

Preparations for initiating a Judicial Review are well underway. The aim is to force the Government and NHS England to stop Clinical Commissioning Groups (CCGs) breaking the law and to make sure redress is provided to those who have been unlawfully denied CHC funding. 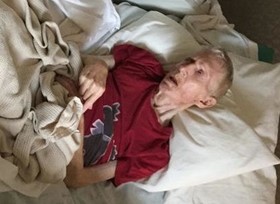 This man suffered from Parkinson’s disease, ulcerative colitis, double incontinence, chronic kidney disease and he was unable to move or feed himself.  His healthcare needs were deemed insufficient to qualify for CHC funding. The day after that decision was confirmed at an appeal, he died weighing 45kg.

Article from the Manchester Evening News January 2020 - see link below.

What is NHS Continuing Healthcare (CHC)?

Social Care for the frail and elderly is means-tested and is either provided by the Local Authority, or is privately funded. CHC is not means-tested, as healthcare is free at the point of use. Outside of hospital, NHS England has a legal duty (via CCGs) to fully fund an individual’s care (in any setting) if their care needs are primarily health related. CHC is often referred to as ‘the best kept secret in the NHS.’

Why this Judicial Review Matters

Multiple independent and expert bodies, the media and the public have been highly critical of the dysfunctional and unlawful CHC system. Even the NHS recognises there is a risk of legal action. In 2018, the head of CHC policy endorsed a report, stating:

“The NHS may become open to Judicial Review and severe reputational damage.”

The failure of Government Ministers and senior NHS leadership to take effective correction action is disgraceful and they must be held to account. They are responsible for causing emotional distress and financial devastation to many thousands of old, ill and vulnerable people and their families. This of course does not reflect on the dedication of NHS frontline staff.

My Personal Experience of CHC

My mother had severe dementia and numerous other serious healthcare needs. After a two-year battle with Wiltshire CCG, I eventually recovered £200,000 of retrospective CHC funding (for my 90-year old father) to pay for her nursing home. To achieve this required a huge amount of complex analysis, over one hundred letters and three meetings. The CCG did everything possible to avoid making an eligibility decision. This included ignoring and grossly distorting the evidence contained in her care records. An Independent Review Panel found that the CHC regulations had been contravened in multiple ways. After further analysis, it was clear that many CCGs operate similarly aggressive CHC avoidance regimes. I then formed a campaign team, all whom have had dreadful experiences of other CCGs that have failed to comply with the CHC regulations. 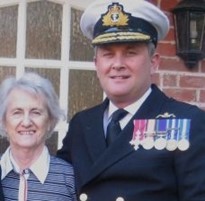 My mother before she suffered from dementia.

The details of the case, along with a comprehensive overview of the CHC scandal, were covered in a front page Daily Telegraph article in February 2019 – see link below.

A Summary of the Key Facts

In 2018 the House of Commons cross-party Public Accounts Committee stated:

‘The funding system is failing people with continuing healthcare needs and there is unacceptable variation between areas in the number of people assessed as eligible, ranging from 28 to 356 people per 50,000 population. NHS England is not adequately carrying out its responsibility to ensure CCGs are complying with the legal requirement to provide CHC to those who are eligible’.

Unsurprisingly, experts consider that with an ageing population the numbers eligible for CHC funding should have been increasing.  In the last five years, NHS ‘snapshot’ data (the number eligible at any one time) shows exactly the opposite occurred.

There are also huge variations (up to 17 fold) in the award rate of CHC funding across the country, often referred to as the ‘postcode lottery’, which cannot be explained by socio-economic or health demographics. Many CCGs fail to correctly apply the complex eligibility criteria. This results in people in one part of the country receiving CHC (often 6 figure sums) and others living in a different area, receiving no funding at all. NHS 2019/20 Q2 data shows that if you live in Richmond or Salford you are six times more likely to receive funding than if you live in Tower Hamlets or Wolverhampton.

There are also many very ill people who have never been assessed for CHC funding because they, or their family, are not even aware it exists, even though it is the responsibility of CCGs to ensure that all potential recipients are assessed.

I have engaged a powerful and experienced legal team who have a track record of success – see bios below. The initial basis of the legal challenge is:

The Secretary of State for Health and Social Care, together with NHS England, has unlawfully failed to ensure that Clinical Commissioning Group decisions as to eligibility for Continuing Healthcare funding are made in a consistent, rational and lawful manner and that the arbitrary and inconsistent decisions as to eligibility for NHS Continuing Healthcare leads to an unacceptable risk of unlawfulness.

In terms of the sheer scale of this scandal, measured by the significant numbers of old, ill and vulnerable people adversely affected and the huge level of unlawful financial deprivation, this is one of the biggest public scandals of modern times. It is therefore not surprising that to mount a legal challenge of this magnitude and complexity, which could potentially end up in the Supreme Court, will be costly. The initial fund raising target is £30,000, with a stretch target of £150,000.

Those who have had experience of this disgraceful CHC scandal will need little convincing that this is a most worthy cause to support but I also appeal to those who have previously not been aware of it. You and your loved ones may well need CHC funding in the future.

We have now had the initial responses to the pre-action 'letter before claim'  from the Government and NHS England. Unsurprisingly, both focus on technical legal arguments why they believe a Judicial Review should not be permitted, rather than addressing the substance of the issues raised. Our QC is not at all concerned by these arguments (he has seen them all before) and for a number of reasons they are not valid. He is now deciding how long to play ping-pong with them before submitting the formal application for a Judicial Review, supported by a significant amount of compelling evidence, which has now been collated.

As I have already mentioned, a legal case of this magnitude and complexity will be a very long drawn out and expensive process. The financial and reputational implications of the Government and NHS England losing are significant and they will probably take every opportunity to appeal, obfuscate and delay but many of you already have personal experience of this type of behaviour by CCGs. Please be in absolutely no doubt that none of this will deter my campaign team, my legal team and I from fighting this battle to a successful conclusion - quite the reverse.

The Campaign Team's focus continues to be on fundraising to support the legal case. We have launched a new website this morning - www.nhschcscandal.co.uk and we also now have two celebrities onboard - Stan Collymore (the former-footballer and Daily Mirror journalist) and Jimmy McGovern (the screenwriter and producer). We remain extremely grateful for your generosity, so please keep on spreading the word and the CrowdJustice link. I am also humbled by your kind words of support and apologise for not being able to reply to you all individually. Your stories make me feel both angry and sad and even more determined to right this disgraceful injustice.

With thanks and best wishes,

Philip Mathias and the Campaign Team

Good progress is being made. The Judicial pre-action claim letter was sent to the Secretary of State and NHS England last Monday and they have 14 days to respond. More details of the legal challenge can be found in the 'Further Reading' section.

Thank you all for your kind words of support and donations, without which this legal challenge would not be possible. Please keep them coming and keep on spreading the word and the Crowd Justice link!

Philip Mathias and the Campaign Team

What a fantastic result to reach the initial target of £30,000 in just over one week! Thank you all so much for your donations, personal stories and kind words of support; they make my campaign team and I even more determined to fight and win this battle. The NHS was established to alleviate suffering, not to create it.

Your donations are being used to fund the gathering, collating and analysis of extensive evidence from multiple sources and the complex process of preparing the initial basis of the legal challenge. This first stage is nearing completion and the initial formal submission will be sent next week.

There is of course still much to do on the funding front, so please keep on spreading the word and sharing the CJ link! At the same time, we are also investigating other potential additional sources of funding.

Thank you all again for your outstanding support.