HIGH COURT CLAIMS AGAINST THE BONZO DOG DOO-DAH BAND BAND, THEIR IPO REPRESENTATIVE AND THEIR IPO WITNESSES NOT YET STRUCK OUT!

PLEASE HELP WITH BANDS FINAL COURT COSTS IF YOU CAN!

As reported in the Daily Mail on the 31st of October 2019 The Bonzo Dog Doo-Dah Band won back their name from Anglo Atlantic Media Ltd. because the Intellectual Property Office (IPO) ruled that only the remaining members of the band were entitled to own the the goodwill and therefore the name associated with that goodwill. That will come as no surprise to fans of the band.

You can read about it in the following Daily Mail article : Rock legends The Bonzo Dog Band win legal ding-dong to put the Doo Dah back into their name

Other articles appeared in the Evening Standard and The Daily Telegraph.

Before winning back their name and  prior to the IPO ruling, Anglo Atlantic Media Ltd had already issued two high court writs against the band, their IPO representative, and IPO witnesses claiming that there was an unlawful conspiracy to challenge the Trademark that was owned by them. These writs have not been withdrawn.

One hearing has taken place at The High Court on the 31st of October however Anglo Atlantic Media Ltd lodged the claim in the wrong court and opposed moving it until the day of the court hearing. The claims will not now be resolved until the claims are heard in the correct court. This will happen soon. Justice Freedman described the claim as potentially an abuse of the courts that was a "collateral attack" on the IPOs registrar. The band expects that the claims will be struck out because they are not only without merit but they also arise from the now invalidated trademark.

However, Anglo Atlantic Media Ltd are persisting with the claims adding to the bands costs. For that reason the band are appealing for further funding not least because the costs to date are higher than the amount of money that has been raised.

The band is upbeat, thankful and humbled by the support from their fans so far.

Please help them make some noises for the last leg of this nightmare.

It has been a long road but finally The Bonzo Dog Doo-Dah Band have successfully defeated abusive writs issued against them by Anglo Atlantic Media Ltd and Director Robert Kirk Carruthers. The victory follows the band’s success in October of 2019 when the Intellectual Property Office ruled that Anglo Atlantic Media Ltd, with Carruthers’ assistance, had registered the band’s name unlawfully.

The victory, which band members Neil Innes and Martin ‘Sam Spoons’ Ash sadly did not live to see, is also a posthumous victory for founder Bonzo Vivian Stanshall, who passed away in 1995.

Deputy High Court Judge Briggs dismantled the hundreds of pages of irrelevant prolix that Carruthers submitted to the court to substantiate his claim that the band and others had unlawfully conspired to publish malicious falsehoods, misrepresent their right to the name and infringe his trademark. Anglo and Carruthers writs amounted to an attempt to block witnesses statements that had been made as part of the IPO proceedings. In summing up Judge Briggs described the claims as “totally without merit”.

Two writs were pursued against surviving band members Rodney Slater, Roger Ruskin-Spear, “Legs” Larry Smith and Vernon Dudley Bowhay-Nowell. Additionally, the widows of Sam Spoons and Neil Innes and two of the witnesses who gave evidence to the Intellectual Property Office during the Trademark hearing, Richard Allen and Michael Livesley. Neither Mr Livesly or Mr Allen had any stake in the bands name, yet were subjected to the abusive litigation for a period of over two years.

It was only thanks to the assistance of Solicitors Michael Shepherd and Camilla Cokell of Trainer Shepherd  Phillips Melins Hayes LLP and the overwhelming generosity of fans who gave money to a crowdfunding campaign that the band were able to see the case to its conclusion.

Judge Briggs noted that Carruthers claims not only sought “to make a collateral attack " on a decision made by the Intellectual Property Office but that they also amounted to “an abuse of process” whilst the claim served against the bands witnesses was an affront to the concept of legal privilege  which witnesses enjoy.

Citing completely unreasonable behaviour by Carruthers that went “far beyond the norm” Judge Briggs also awarded indemnity costs in excess of £50K to the band on a summary basis. He will hear a further application to have the costs charged directly to Carruthers in two weeks.

The Judgment was handed own verbally on the 8th of April but as soon as we have a copy we can publish it will be made available.

“Legs” Larry Smith of the Band noted “the band has suffered monstrous threats, lies and claims that should never have been issued and then allowed to be processed in the first place” whilst Rodney Slater wryly reflected “Victorious and worse off I carry nothing but the scars of two years of tactical, vexatious litigation from legitimately defending what was mine. Don’t try this at home until the law is reformed “. Roger Ruskin Spear added “daft I call it”.

Richard Allen one of the bands witnesses observed “Finding yourself  being sued for fabricated nonsense by someone you have never met or spoken to is incredible enough but I find it even more startling that the claims being made against me were based entirely on my witness statement for an IPO hearing. This is a case where someone weaponised the legal system to intimidate a witness with impunity. Nobody protected me and that cannot be right. I am hoping this is now taken further by the authorities”

The band with the assistance of Kerry McCarthy MP and The Musicians Union now intend to assist the IPO and Parliament in closing a loophole that allows anyone to appropriate a bands name by paying a £200 fee without having to provide adequate proof of ownership. Similarly, they wish to pursue the issues raised by an attempt to sue witnesses - behaviour that could potentially amount to witness intimidation - and ensure that there are  safeguards for witnesses in the future so that anyone providing a witnesses statement does not find themselves in court faced with enormous legal costs.

Thank you again courts fans and we hope to see you in December.

Please also look out for exciting news of an enormous box set filled with unseen footage,  live recordings, demos, outtakes and all of the bands albums and singles in mono and stereo. It will also be packed with reproductions of memorabilia and a hard back book. All material is officially licenced from the rights owners with audio taken from from the master tapes. It will be out some time in 2021 and promises to be the final word on the band.

The date for the final ruling on Carruthers bogus writs has been moved and it is now due on the 8th of April at 3pm in front of Deputy High Court Judge, Chief ICC Judge Briggs in the Rolls Building in London.

We look forward to reporting what we hope will be a positive outcome for the band.

It has been a horrible two years for the band what with the ongoing court case and trademark dispute as well as the loss of Neil and Sam. However with the Trademark back in their hands already the Court will finally be handing down a Judgment on the writs for fraud and conspiracy issued against the band and their witnesses by Mr Carruthers and Anglo Atlantic Media Ltd. This follows a one day hearing which took place on the 25th of February this year.

The ruling will be handed down on the 19th of March at 10am in the Rolls Building by Deputy High Court Judge, Chief ICC Judge Briggs.

Many thanks for all your support thus far

Fundraiser to Stay Open Until February 2020

Once again THANK YOU to everyone that has given support to the band on the second round of Crowdfunding. Yet again the band have been knocked out by the love and affection shown to them in their hour of need.

As notified, in previous mailings, all surviving members of the Bonzo Dog Ban(ne)d will be performing their classics at The O2 Shepherds Bush Empire on the 29th of May 2020 CLICK HERE FOR MORE INFO   .

The legal nightmare that the band have been subjected to after their name was appropriated (now restored)  is insanely expensive and may well require both the existing Crowdfunding and the fees from the concert to see it through to conclusion. The company that appropriated and now lost the bands name has not withdrawn it's ludicrous claim that the band lied about their self evident right to the name. It is expected that these claims will fail but there is a cost and for that reason we are keeping the fundraiser open until February 2020.

Moves are also afoot in Westminster to try and get the law changed so that individuals have to provide evidence of ownership when they lodge a trademark. These efforts will continue in the New Year.

We would appreciate it if you could inform anyone you know, who might be interested in supporting this campaign, by emailing them the page link. Additionally posting the link on social media would continue to spread the message. THANK YOU!

The band sincerely hope that the concert in May will be a celebration that will be remembered for a very long time to come and they also hope to see you there doing the watusi of course!

The next court date has been set for the last week of February 2020 and the band and their advisers remain confident that they will strike out what is left of the legal action that was initiated against them and their witnesses on the back of a bogus trademark, which has now been invalidated.

Unfortunately the whole sorry episode remains an insanely expensive process. Once Parliament returns the issue will be pursued further in Westminster with the assistance of some  supportive MPs so that other bands do not have to suffer the same nightmare.

In the meantime the remaining members of the band, who are upbeat, thankful and humbled by the support they have received so far, will be reunited for one final grand HOORAH as a thank you to fans.  ‘Still Barking’ under the name of Bonzo Dog Banned comes to O2 Shepherd’s Bush Empire in London on 29 May 2020.

It is hoped that a special launch event will be held later in the year in London for the mammoth 'Still Barking Box' set which will contain 18 discs of audio and visual material from the '60s and '70s (much of it previously unreleased) reproduction memorabilia, a book and more.

Crowdfunders will receive a special invite once a date  has been confirmed.

Thanks again for your support. The band looks forward to seeing you in London in May next year. 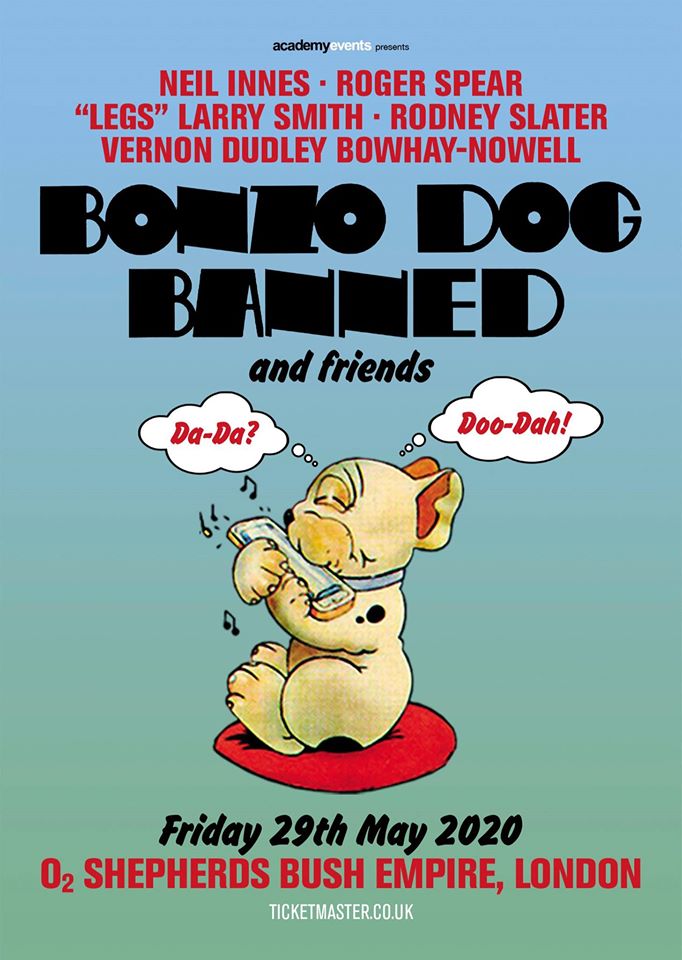