We’ve been refused permission to appeal to the Supreme Court, by the Court of Appeal. You can read the application we funded and made here.

You Want the Truth about the NHS? You Can’t Handle the Truth (Say the Court of Appeal)

The Court of Appeal has just set a lethal precedent for patients and sent a clear message to NHS staff as to what they can expect from the courts if they are attacked for raising safety concerns.

It has ruled that an NHS Trust made false, repeated and detrimental denials (about a whistleblower’s serious safety concerns) but also that the Trust’s false denials were not true whistleblowing detriments for the purposes of whistleblowing law because their primary aim was to protect the reputation of NHS leaders. This has now been set as a precedent for all other whistleblowing cases. It needs overturning at the Supreme Court.

Ten years on from when I first blew the whistle, the Court of Appeal has finally found Alder Hey bosses did cause detriments by making false statements publicly and to Parliament about serious issues I first raised in 2009 about children's surgical safety. It’s clear the intention of the statements were to make me seem dishonest for the purpose of cover up.

The Court of Appeal has accepted that the original tribunal got it wrong and that NHS bosses did make false and detrimental statements about my whistleblowing concerns. But astonishingly it then decided that the false and misleading statements made about the safety issues were made to protect the reputation of the hospital and its leaders, and therefore could not be classed as whistleblowing detriments as defined by Section 43B of the Employment Rights Act (whistleblowing law). This essentially means the Court allowed the NHS bosses to get away with it: to harm me by name, but argue I wasn' t in the "line of fire".

Detriments: Hospital directors sent out a series of briefings dismissing my safety concerns, to a variety of bodies such as the Chairs of the Health Select Committee and the Public Accounts Committee. The judgment lists examples:

There were letters from Sir David Henshaw, the Chairman of Alder Hey…a letter dated 22 October 2013 which Sir David wrote to the Right Honourable Margaret Hodge MP, chair of the Public Accounts Committee … a letter dated 24 October sent to the chair of the CQC …The third letter, item 5.6, was sent to David Davis MP on 29 November 2013…

The judgment says of the hospital directors’ rebuttals:

…there was clearly a detriment to the appellant in the way in which these letters were framed and it was not open to the ET to conclude otherwise.

…the Trust’s communications did not fairly or accurately reveal the fact that some of his complaints were justified, and in my view the only sensible inference from the offending passages is that the appellant had made specious, unjustified and unsubstantiated complaints, with perhaps some suggestion of bad faith resulting from the use of the phrase “weakening genuine whistle-blowing”. Any worker could reasonably treat these comments as damaging to his reputation and integrity and could reasonably believe that they might bring him into disrepute with his peers. These detriments were caused by the acts of persons acting on behalf of the Trust when they chose to send the various letters with the offending observations. The only question, therefore, is why the Trust, through these individuals, made the observations which gave rise to the detriment.

“….misleading observations to the effect that the RCS [Royal College of Surgeons] report had given an entirely clean bill of health to the Trust…”

“…the detriments resulted from the false statements…”

Reason why: But my appeal fails because the Court of Appeal concludes:

…The Trust was concerned with damage limitation; in so far as the appellant was adversely affected as a consequence, it was not because he was in the direct line of fire.

…whilst I accept that, contrary to the finding of the ET and the EAT, sending letters in the way they were drafted did constitute a detriment to the appellant, it was not a detriment on the grounds that the appellant had made a protected disclosure or disclosures.

Public concern: The judgment begins to capture misconduct that’s common across public life: false denials of serious concerns, where the denials smear those raising them. Worryingly, the judgment makes thing worse. Institutions can use false claims as defence of reputation, safe in the knowledge they can argue the smeared whistleblower merely suffered collateral damage.

You can read my further thoughts and the Court decision itself here. The judgement makes other adverse points too, but the legal issue highlighted on this page applies to any worker who sees wrongdoing and seeks even basic protection for reporting it. We have to undo the precedent that's been set.

How much we are raising and why? - We're raising 50K to meet the ongoing legal costs of meeting this deeply adverse precedent, including a challenge at the Supreme Court.

We’ve been refused permission to appeal to the Supreme Court, by the Court of Appeal. You can read the application we funded and made here.

Regrettably, despite our best efforts, we haven’t raised sufficient funds in time to make it safe for a full bid to the Supreme Court.

In particular, the risk is that we’d be uncovered for thousands of pounds of our opponent’s costs on every point where we didn’t win. It’s not a risk I can take any longer, given the financial straits I’m already in due to their prior legal costs.

But we have exposed something ugly and unsettling. Something that’s been confirmed by the public inquiry into child abuse. Institutions put reputation before children’s safety - and judges in our highest courts seem comfortable with that. When the next scandal hits, how long before the next institution cites the Court of Appeal decision, using reputation as a defence?

This is why I’m adding my voice to those, including MP Dr Whitford, calling for a complete overhaul of our whistleblowing legislation. It’s over 20 years old and has been gamed to destruction by employment lawyers and weak tribunals.

Overall only 3% of whistleblower claims ever win, and like rape cases, that’s far too low to be safe. Worse still, the legislation places no duty on the institution to investigate safety concerns.

Thanks again for helping reveal the problems in the system - and for lending me the strength to get this far in one piece. Please do lend your support to the growing campaign for legal reform.

Finally, I’d like to thank the legal team at Outer Temple who have truly stretched sinew and synapse to help. 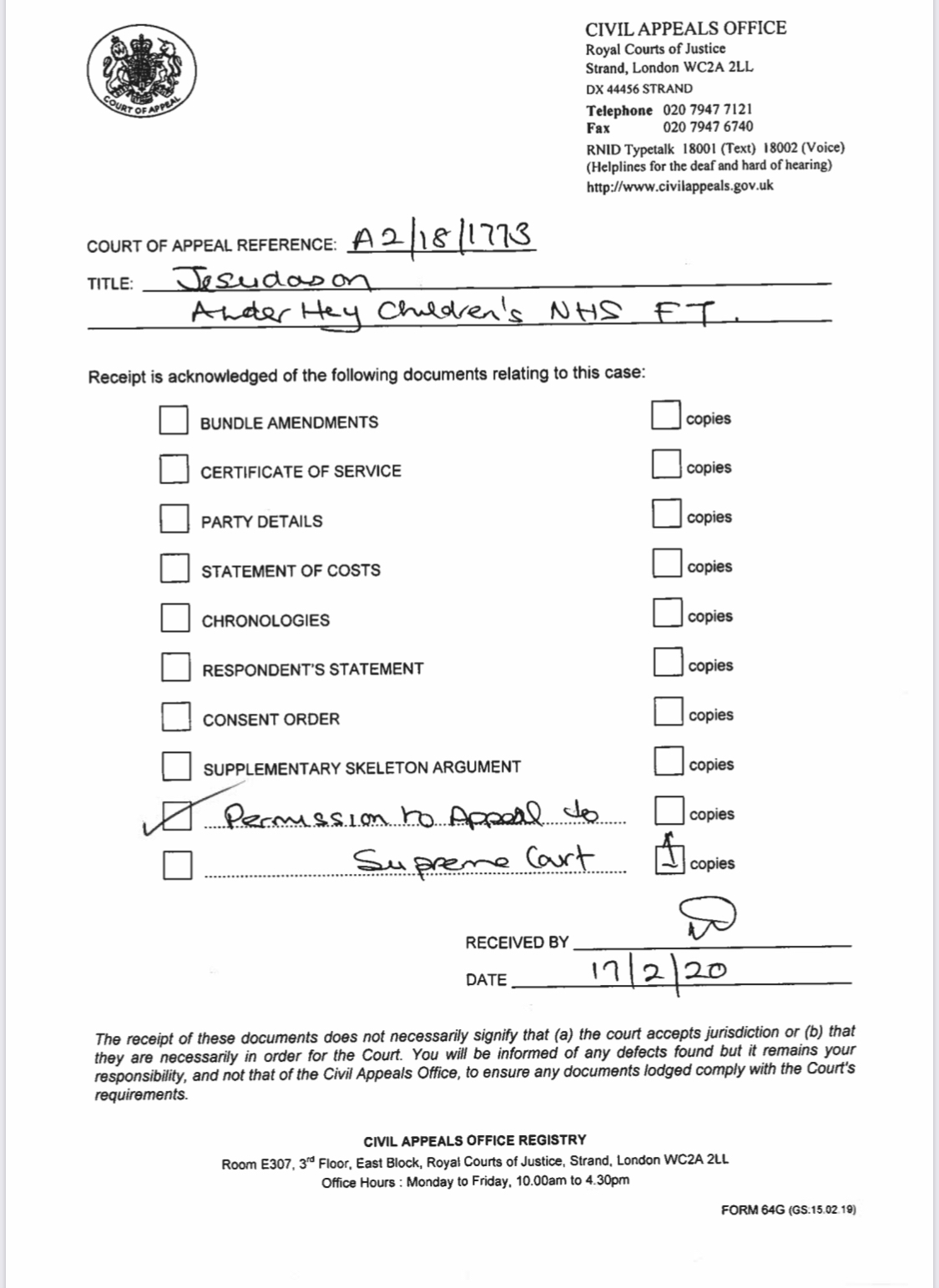 Thank you for supporting and sharing this page.

As a result we’ve taken the first step toward the Supreme Court - which is asking the Court of Appeal for permission to go higher.

More often than not, the lower court refuses, opening the way for us to approach the Supreme Court directly.

Please chip and share - to challenge the idea that bosses can mislead even Parliament over the most serious safety problems, all because they believe it  best to protect their reputation.