To stop the Government ruining Victoria Tower Gardens (VTG) with a huge new monument and underground structure. VTG is bounded by the World Heritage Site of the Palace of Westminster, the Thames, magnificent trees on the Embankment, and Lambeth Bridge. We support endeavours for Holocaust education, but this planned memorial would be a disaster for this beautiful and much-used park. It is a small area and will be unable to cope with what is proposed.

The project is known as the UK Holocaust Memorial and Learning Centre (UKHMLC). It has been conceived and promoted by the Government. It was proposed without warning to go in VTG “in a moment of genius” by ministers. We and many others, including Holocaust victims and descendants, say the site is anything but genius.

You will see from the photos above and plans below, how much the structure, along with security fencing etc. will impact on the existing space – the gardens will no longer be a place for recreation, but will become first and foremost a tourist destination, attracting a huge number of people.  The existing character of this Grade 2 listed park will be irrevocably destroyed.  Instead of the grass shown above, there would be a mound and security fencing (above the intended learning centre) with much loss of grass. 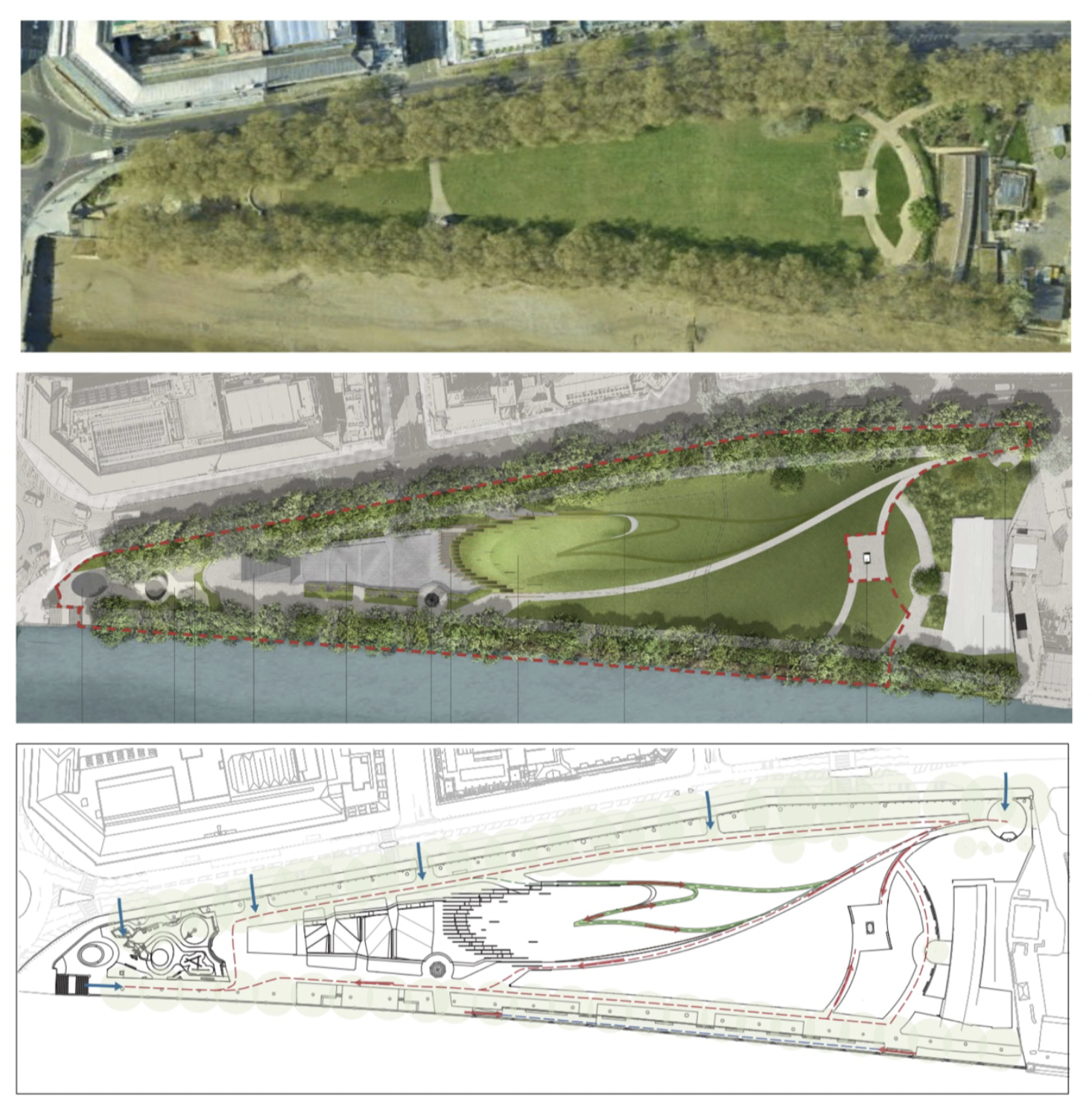 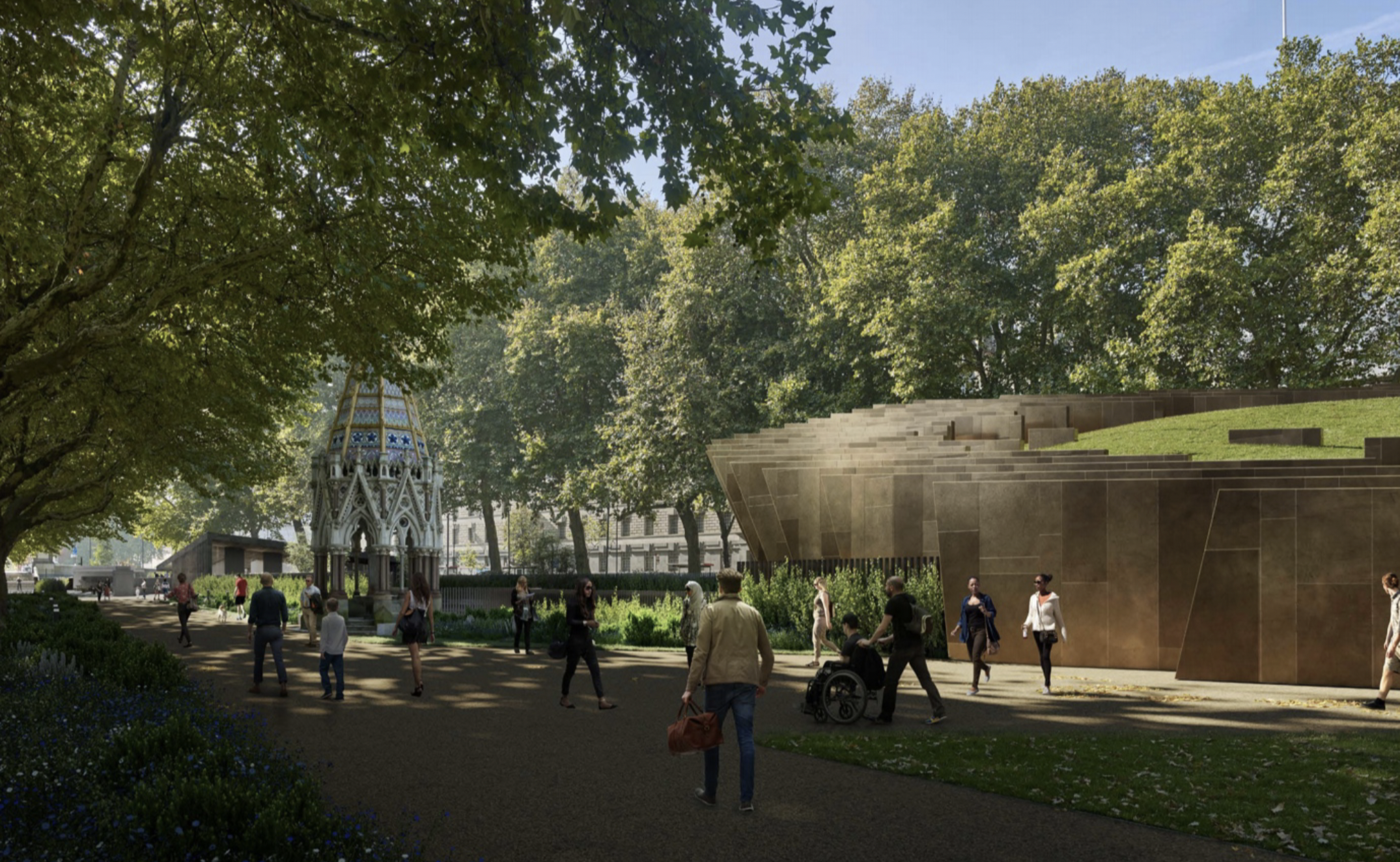 The pictures show how the new monument will abut and overshadow the heritage-listed (Grade 2*) Buxton Memorial, which recognises the campaign for the abolition of slavery.  The future health and viability of at least two ancient plane trees forming part of the original Victorian design of the gardens is also in question. And the work would be in direct breach of an Act of Parliament intended to secure the area as an oasis of green space, gardens for the enjoyment of the public.

We seek to overturn the decision of an Inspector to grant permission following a Planning Inquiry, and the subsequent approval of same by the Minister for Housing (Christopher Pincher). The Secretary of State, then Robert Jenrick, had to delegate the decision to his direct junior (supposedly to secure objectivity).  The Inspector recognised that his recommendation was “finely balanced”. We believe and are advised by Counsel that he made several errors of law, including not giving serious consideration to the most obvious alternative site at the Imperial War Museum (which was keen to host the project), not properly evaluating the status of VTG as a listed park and garden, evaluating harm to listed assets in an unlawful way, and not grappling with the harm to the trees which the Inspector had recognised.

Please help challenge this wholly inappropriate development which stands to wreck an iconic green space. We have support from many people and local groups. Westminster City Council fought hard against the proposals at the planning inquiry. But this sort of challenge is expensive, and we need all we can get.

Who are we and why are we doing this?

London Historic Parks and Gardens Trust (known as the London Gardens Trust) is a small charity that seeks to protect historic parks and gardens across the capital. We are affiliated to the Gardens Trust, statutory consultees in the planning process representing designed historic landscapes.

The Government seeks to build the UKHMLC at VTG, adjacent to the World Heritage Site of the Palace of Westminster. The Trust entirely respects the desire to memorialise and educate people about the Holocaust, but not in the way proposed here.

The Trust has long campaigned to stop this inappropriate development. An earlier Judicial Review queried the lack of objectivity of the ministerial decision-making arrangements and at least resulted in disclosure of so-called “handling arrangements” within the department.

The Trust appeared at the planning inquiry held to consider the project and which resulted in the Inspector recommending approval of the planning application but only by a fine margin, essentially because it was said to be needed urgently. The full report is available here.

While carefully written, we are advised the report and decision are unlawful. With the seed support we have had, we have already lodged an appeal in the High Court and await responses from the government. At the heart of the legal points mentioned is the perception of the Trust, and many others, that the proposal is simply wrong; and London will bitterly regret the loss of VTG.

The case has national implications for all planning involving listed buildings and historic parks like VTG. There is an excellent team of lawyers, but even with them working at reduced rates, this costs time and effort. Please give as generously as you can.

After responses from opponents, we will await a decision from the High Court about whether the case is granted permission to proceed, and there are various possibilities as to how it will be dealt with. We'll send updates to our subscribers as soon as we hear further.

The Trust risks having to pay the government £10,000 if it loses. We also have significant legal costs of our own. Our fundraising target is initially £10,000 to cover that liability but we anticipate needing to budget in the region of £50,000, much of which we hope will come from this crowdfunding page.

Thank you for your previous support, and reading this - we must not give up now.