by Save Stonehenge World Heritage Site

We are a group of individuals closely associated with the Stonehenge Alliance which has been campaigning for around 20 years to protect the Stonehenge World Heritage Site.

Monumental vandalism of the Stonehenge landscape must be stopped!

We want to challenge the Government’s decision to approve the construction of a £2 billion dual carriageway through the Stonehenge World Heritage Site.

This decision went against the recommendation of the independent Panel that scrutinised the proposals.

The new road and tunnel would cause massive and irreparable damage to the archaeology and landscape in violation of the UK’s international commitments to safeguard the site for future generations. 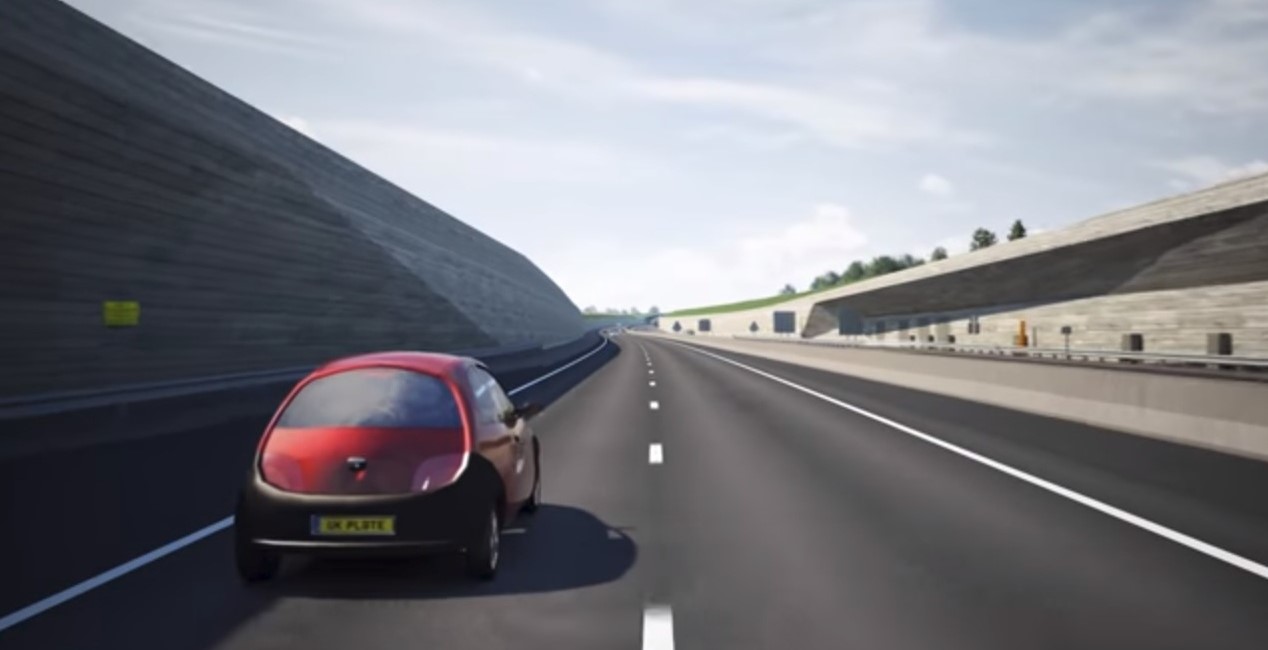 But isn’t the road in a tunnel?

The spin by Highways England and the Government is that the scheme will help “protect” and “enhance” the World Heritage Site.

The tunnel, at around 3km long, is far too short to protect a site 5.4km wide.

Twin tunnel portals, deep dual carriageway cuttings, and slip roads would be constructed within the World Heritage Site, along with huge interchanges at its boundaries. Untold archaeological evidence would be destroyed and travellers’ passing view of the Stones would be lost. There would be serious impacts on the natural environment and an inevitable increase in carbon emissions. 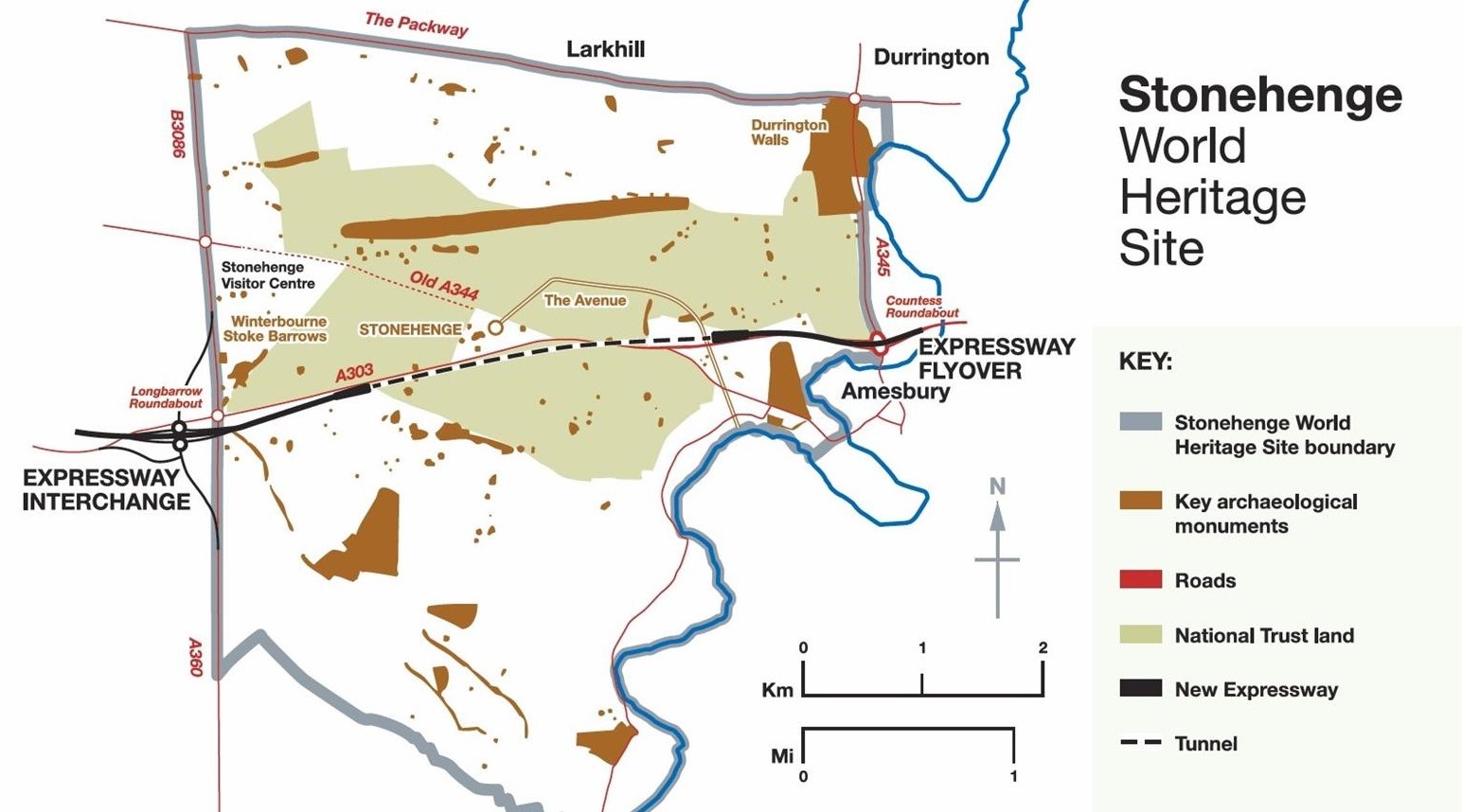 Why Stonehenge is so special

Stonehenge, together with Avebury and their surrounding landscapes, were designated a World Heritage Site in 1986 because of their unique Neolithic and Bronze Age monuments and sites dating back some 6,000 years. The famous Stonehenge monument stands at the heart of, and inseparable from, an expanse of chalkland remarkable for its evidence of our distant ancestors: their homes and living spaces, farming, working and ceremonial practices. It is described by the UK Government as a “landscape without parallel”. 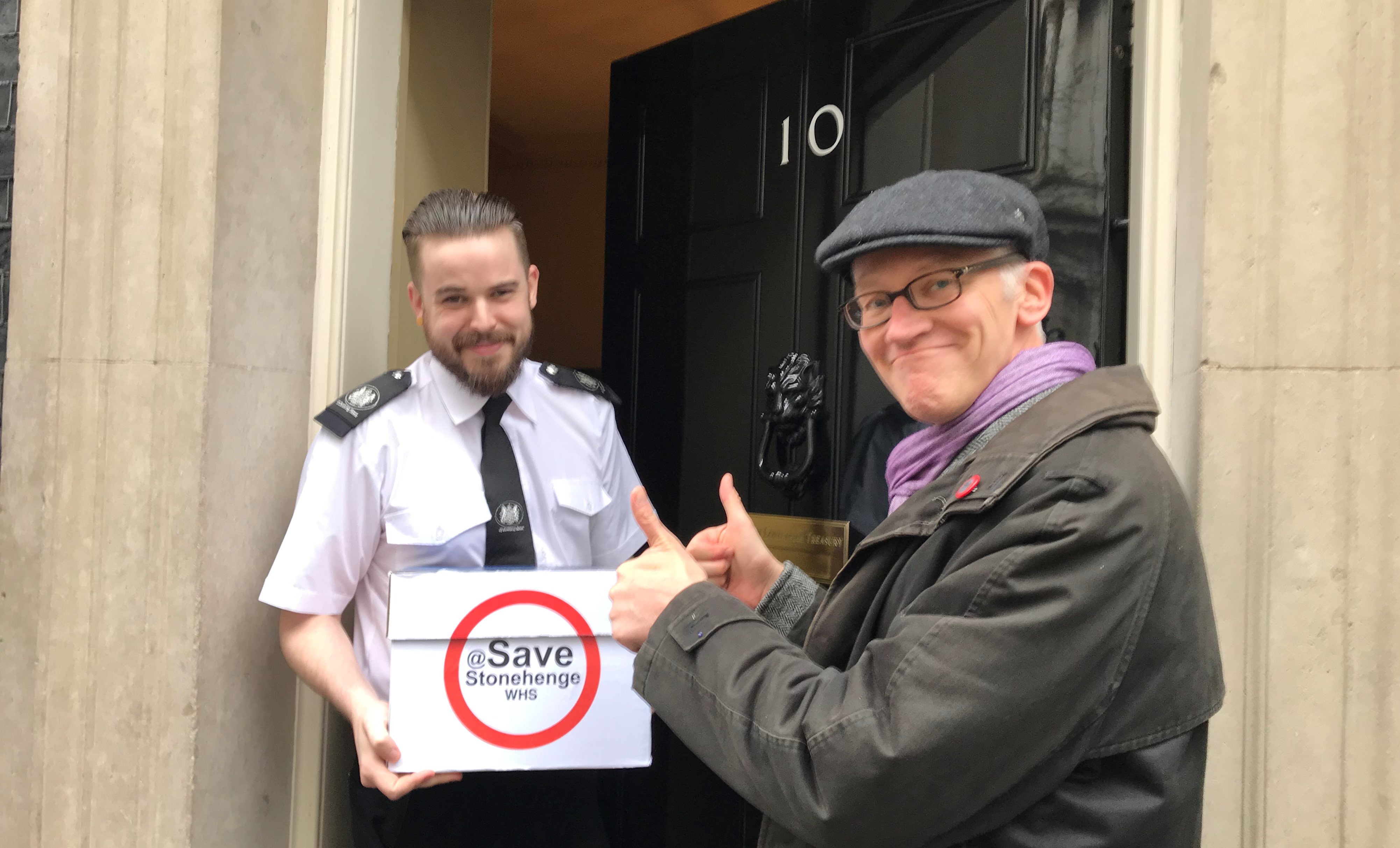 Tom Holland, Stonehenge Alliance president, with the petition at 10 Downing Street (currently at around 200,000 signatures)

What is a World Heritage Site?

World Heritage Sites are recognised as outstanding examples of cultural or natural heritage and are so designated by the United Nations Educational, Scientific and Cultural Organization (UNESCO). They are put forward for designation by national governments who promise to safeguard them for future generations.

In recent years, with the use of modern geophysical techniques, great advances have been made in archaeological discovery. Much scientific survey work of this kind in the Stonehenge World Heritage Site awaits analysis. In 2020, a major new monument was identified: a series of huge pits centred on Durrington Walls henge, not far from Stonehenge. A few years ago, exciting Mesolithic finds were discovered at Blick Mead. Who knows how much unknown archaeology would be lost by bulldozing great swathes of the landscape for a new road? 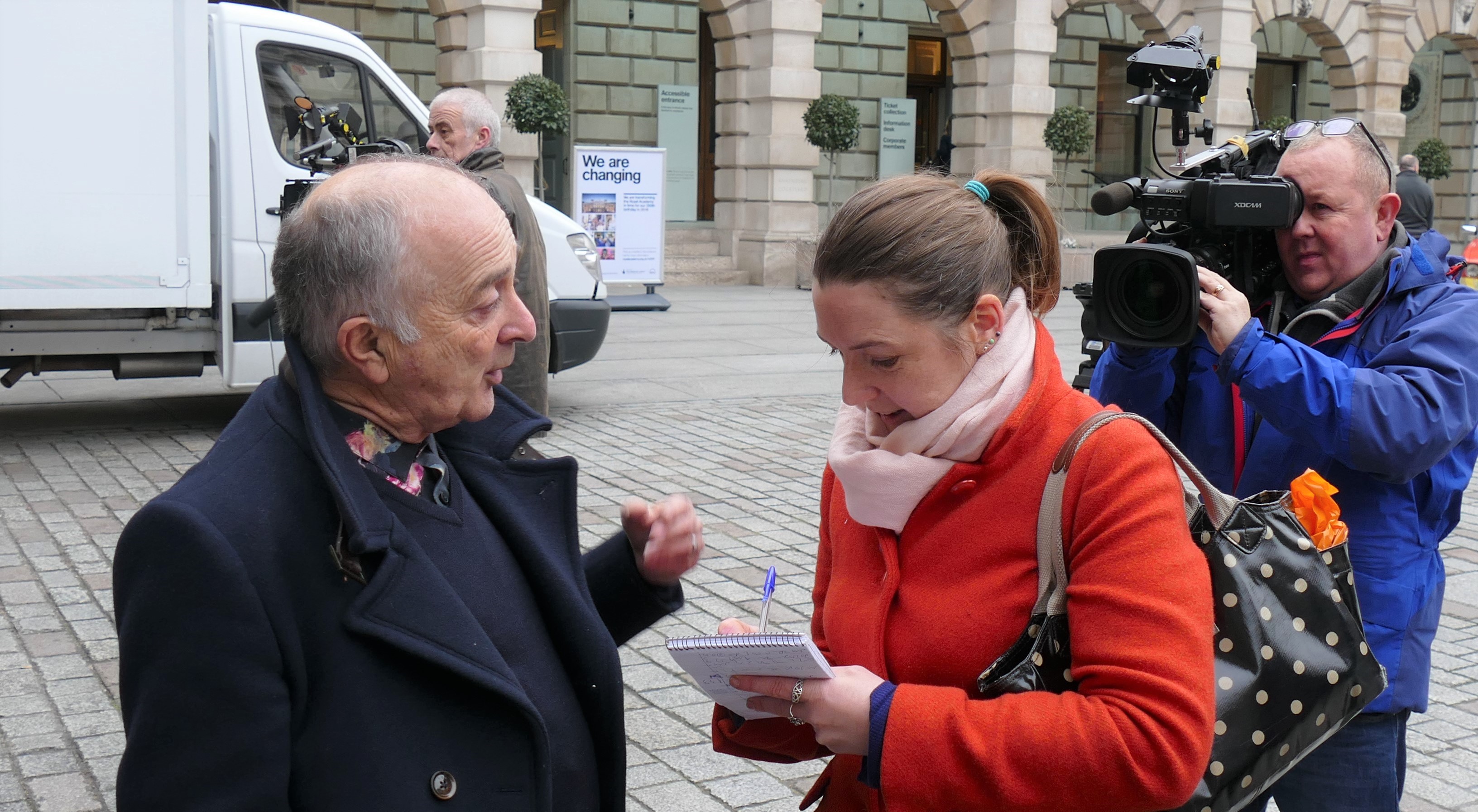 Sir Tony Robinson of Time Team fame, explains his concerns about the road

Isn’t the new road needed to help the South West?

This road is one of eight schemes needed to complete dualling of the A303 corridor from Basingstoke to Exeter – most of them not yet worked up. Any perceived benefits of the Stonehenge scheme are many years away: it would simply move traffic to the next congestion hotspot.

Completion of all these road schemes wouldn’t solve the problem either. It would encourage more traffic along the A303 corridor and into the South West whose rural roads already suffer from too much traffic at peak times.

Isn’t the road good for the economy?

No, the new road will cost far more to build than it will ever deliver in benefits, even by Highways England’s own figures.

To stop this monstrous desecration of our ancient past and inexplicable urge to increase carbon emissions in a climate emergency, we need to go to the High Court to seek a Judicial Review of the decision to approve this grossly Philistine and expensive road scheme.

Every effort must be made to save this international treasure

We’re lucky to have a legal team experienced in these issues. They have agreed to represent us at a discount. We must quickly raise at least £50,000, although this might rise if the case is more complicated than first anticipated. This is to cover lawyers’ costs, court fees and the risk of having to pay some of the Department for Transport’s costs if we lose. Our initial target is to raise £25,000 to get our case going in the hope that we can reach an overall target of £50,000 to be able to complete the Judicial Review process.

If we are able to raise more than this, funds will be ring-fenced to cover any additional unforeseen legal costs, including any potential appeal, our wider costs for this case, and to support other heritage or road campaigns in the courts and planning system.

Thanks to our brilliant legal team we have succeeded in getting the planning permission (the Development Consent Order) for the A303 Stonehenge scheme quashed in the High Court.

The judge found that the Transport Secretary did not have all of the evidence needed lawfully to carry out the ‘heritage’ balancing exercise required by planning policy; and that he had unlawfully left out of account consideration of a less damaging alternative to the scheme, such as a longer tunnel.

Our heartfelt thanks go to all of our supporters without whom we could not have made this legal challenge.

Despite this fantastic victory, the battle may not be over. We will find out in the next few weeks whether the Secretary of State will appeal the judgement. He could also seek to amend the scheme, but that would take a lot longer. Therefore, at present we will keep this crowdfunder open until we know where we stand.

In the meantime, let’s celebrate this remarkable victory and be thankful that Stonehenge World Heritage Site has been saved from Highways England’s highly destructive road scheme.

Our day in court arrives!

On Wednesday (23rd June) our legal challenge to Grant Shapps’ decision to approve the highly damaging road scheme through the World Heritage Site will be heard at the High Court. The hearing, which is likely to last for 3 days may be our last chance to stop this wanton destruction.

The hearing is taking place in person at the Royal Courts of Justice, but only our legal team will be allowed to attend. The public, however, can watch proceedings online, but need to register with the court, the day before (on the Tuesday) as follows:

To observe proceedings remotely, people need to email listoffice@administrativecourtoffice.justice.gov.uk no earlier than Tuesday 22nd June, with case ref. no. CO/4844/2020. A link will be sent to them up to 15 minutes before the hearing. Please note it is illegal to record or take any screenshots of proceedings.

While we will be anxious to know what the judgement will be, it’s unlikely to be known for some time.

Success at the first hurdle! On 24 February we learnt that our challenge to Transport Secretary Grant Shapps’ shocking decision to go ahead with the A303 Stonehenge scheme would be heard in the High Court on 23 – 25 June.

Apart from the Department for Transport defending our challenge, Highways England and Historic England will also be taking part as interested parties.

We’re contesting the decision on the following grounds:

Thanks to your generosity we reached our initial target of £50,000 very quickly and this enabled us to go forward with the necessary preparation work for the judicial review. However, due to the complicated nature of the case and the amount of work needed for a three-day hearing, we are having to raise our target to £80,000. We hope you understand and feel able to continue to support us. Legal action is expensive and although our lawyers are working for us at a heavily discounted rate, costs mount up. We also have to bear in mind that any decision could be appealed which we would potentially have to fundraise for as well.

Nevertheless, we are firmly committed to the fight to save Stonehenge World Heritage Site from irreparable damage and with your help we have successfully negotiated the first hurdle. Now we need to prepare for the hearing.

Thanks for your support so far, we cannot do this without you.

Our target has been reached!

We are overwhelmed by the generosity of over 2,000 donors who have met our stretch target of £50,000 within a month! Thank you all so much for your wonderful support which means that we now have funding to go forward to the next stage. BBC online news reported this fantastic achievement on 31 December.

Donors’ support allowed our application to be made on 23 December for a judicial review of Transport Secretary Grant Shapps’ decision to proceed with the A303 Stonehenge tunnel scheme.  Our lawyers issued a press release on the same day which sets out the key grounds of our challenge. We expect to hear from a judge later in January whether we have a case.

Legal action is both expensive and unpredictable. Even if we have a case it could eventually lead to an appeal which would involve greater costs than so far anticipated. Any funds raised over the £50,000 we need for the judicial review stage will be prioritised to pay any further costs that might be incurred on our case.

So we continue to welcome donations to the appeal and sincerely hope that the strength of concern shown for protection of the Stonehenge World Heritage Site brings a positive outcome for this internationally valued heritage landscape in 2021.

We send all good wishes to our supporters for the New Year and will continue to post updates on the case when we have news.

Thanks to the amazing generosity of over 1,000 people we've smashed our initial target in less than 60 hours. This means we've been able to kick-start the challenge as we can now cover the preparation costs.

This is really great news, especially at such a difficult time for many. We know that people are shocked and angry at Transport Secretary Grant Shapps’ decision to approve the highly damaging dual carriageway through Stonehenge World Heritage Site, against the advice of UNESCO and the government’s own independent planning inspectorate. And that outrage has not been confined to the UK: A former Prime Minister of New Zealand expressed her concern on Twitter.

We received good coverage of our launch, including on ITV, BBC Points West, BBC, The Guardian, The Telegraph (£), Mail online, The Times (£) and many more. We know that people care passionately about our heritage and very much want us to succeed.

We now need to push on to our £50,000 target so that we can apply for a judicial review before Christmas. A judge will then decide, sometime in the New Year, whether we have a case (which we certainly believe we do!).

We are tremendously grateful for everyone's support. Please continue to share our appeal with friends, family and colleagues. This could help us raise the remaining money and give us a fighting chance to stop this wanton vandalism of one of the world’s most iconic heritage sites.