Save Pauls Moss House, Save Our Conservation Area

by Save Pauls Moss

Save Pauls Moss House, Save Our Conservation Area

Save Pauls Moss
Case Owner
We are a group of heritage-loving Whitchurch townsfolk with a strong attachment to Pauls Moss House and its former owner E P Thompson who was responsible for so many of our town’s enrichments
Funded
on 11th July 2019
£1,730
pledged of £12,000 stretch target from 20 pledges

We did it!! Pauls Moss House Saved!

This is our last few hours of fundraising on CrowdJustice.  The amount raised is a significant contribution to our costs and we would like to say a huge thanks to all who have so generously dona…

We oppose the demolition of Pauls Moss House, a well-loved Victorian villa within the conservation area of Whitchurch, Shropshire. Designed by Willink and Thicknesse (architects of the Cunard Building, Liverpool) and once the home of our town’s greatest benefactor E P Thompson, the House contains some stunning craftsmanship and its loss cannot be justified by the current redevelopment plans for the area. 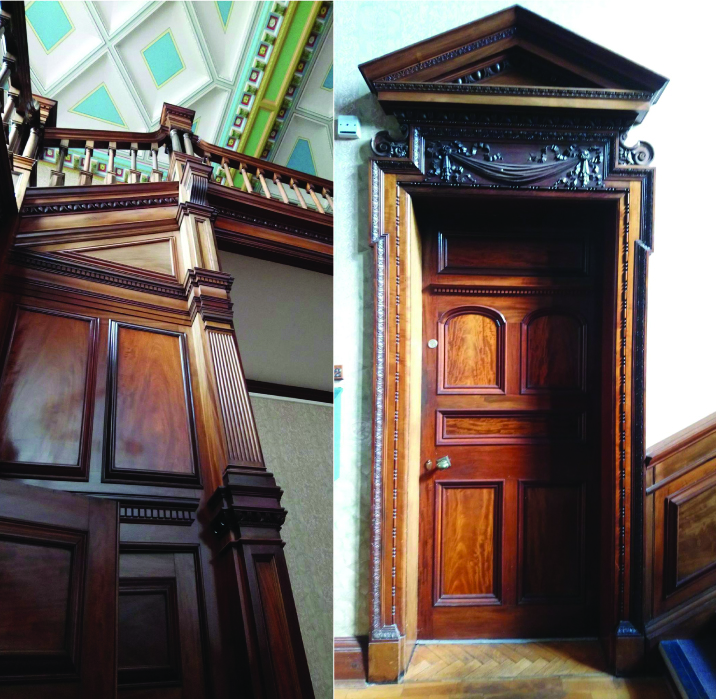 The current owners of the House (and indeed the whole Pauls Moss site) are Wrekin Housing Trust who have formed a partnership with Shropshire Council and Shropshire CCG/NHS England to redevelop the area to provide a new health centre, community hub and 74 units of supported living accommodation. ‘Save Pauls Moss’ has no objections to the objectives of the scheme, only to the way in which the developers want to achieve them.  Following rather scant consultation with local residents and a disregard of a public outcry and 900 signature petition to save the House from demolition, a full planning application from Wrekin Housing Trust was submitted to Shropshire Council in January 2019. 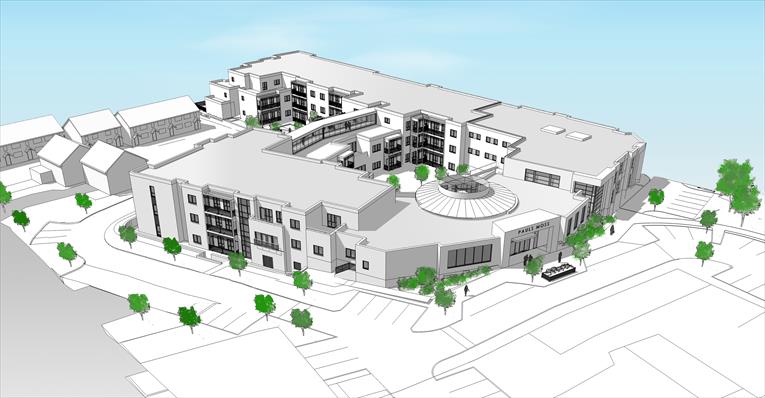 As well as the needless destruction of the House, the application offers up an extremely disappointing design of a single monolithic structure to contain the health centre, community hub and residential units. This ‘donut’ of a building is far from being of the required high architectural standard to compensate for the loss of a heritage asset such as Pauls Moss House and the decimation of the conservation area in that part of Whitchurch.

In terms of massing and scale the proposed building would stick out like the proverbial sore thumb in a streetscape full of many smaller scaled Listed Georgian and earlier dated properties. It would dwarf the existing housing to its rear, blocking daylight and removing residents’ privacy and their visitor parking spaces. Not to mention a significant loss of green space and safe walking across the site to and from their homes.  There would also be unfavourable impacts on the neighbouring playing fields, lake, community orchard, allotments and specially cultivated wild area, particularly from water run-off issues and the proposed erection of a viewing terrace on the edge of the wild area.  Forty years of volunteer labour have turned this once derelict space into a highly valued community asset which deserves preservation and respect.

Shropshire Council’s own Historic Environment Team had this to say in their objection to Wrekin’s scheme:

“... we are mindful of the guidance provided in section 018 Reference ID: 18a-018-20140306 of the National Planning Practice Guidance which states that ‘If the building is important or integral to the character or appearance of the conservation area then its demolition is more likely to amount to substantial harm to the conservation area, engaging the tests in paragraph 195 of the National Planning Policy Framework’.  It is our opinion that the building makes a significant positive contribution to the character and appearance of the Conservation Area.  Furthermore, that there would be very little or no justification for retaining its current boundary at this location if it were to be removed.  In addition, demolition would also result in a total loss of significance to Pauls Moss House itself as a non-designated heritage asset.

... it is advised that, because of the proposed demolition of Pauls Moss House, paragraphs 193, 194, 195 and 197 all apply. To date the applicants have made no attempt to justify the proposed development in relation to tests set out in paragraph 195 in particular.

We also advise that proposed development is contrary to Local Plan Policies CS6, MD2 and MD13.”

“The historic building maintains the legibility of this part of the conservation area and is critical to its special architectural and historic interest.  Proposed views clearly demonstrate its demolition will remove the historic focal point and its replacement will increase the amount of development in the conservation area of a form that is already considered negative and will harm significance.

Historic England has concerns regarding the application on heritage grounds.  We consider that the issues and safeguards outlined in our advice need to be addressed in order for the application to meet the requirements of paragraphs 193, 194, 196, 200 and 201 of the NPPF.

In determining this application you should bear in mind the statutory duty of section 72(1) of the Planning (Listed Buildings and Conservation Areas) Act 1990 to pay special attention to the desirability of preserving or enhancing the character or appearance of conservation areas ...”

“Pauls Moss House remains a distinct, significant, appropriate and characterful addition to the town and in accordance with Historic England guidance on wider measures of heritage value, it retains architectural, aesthetic and historic merit through strong association with the development of Whitchurch and an important historical figure.”

In addition to this expert opinion expressing opposition, hundreds of local people have also posted passionate objections to the demolition of Pauls Moss House on the Council planning portal and strong support has gathered on social media. Local press have also engaged with ‘Save Pauls Moss’ offering generous space to our articles. 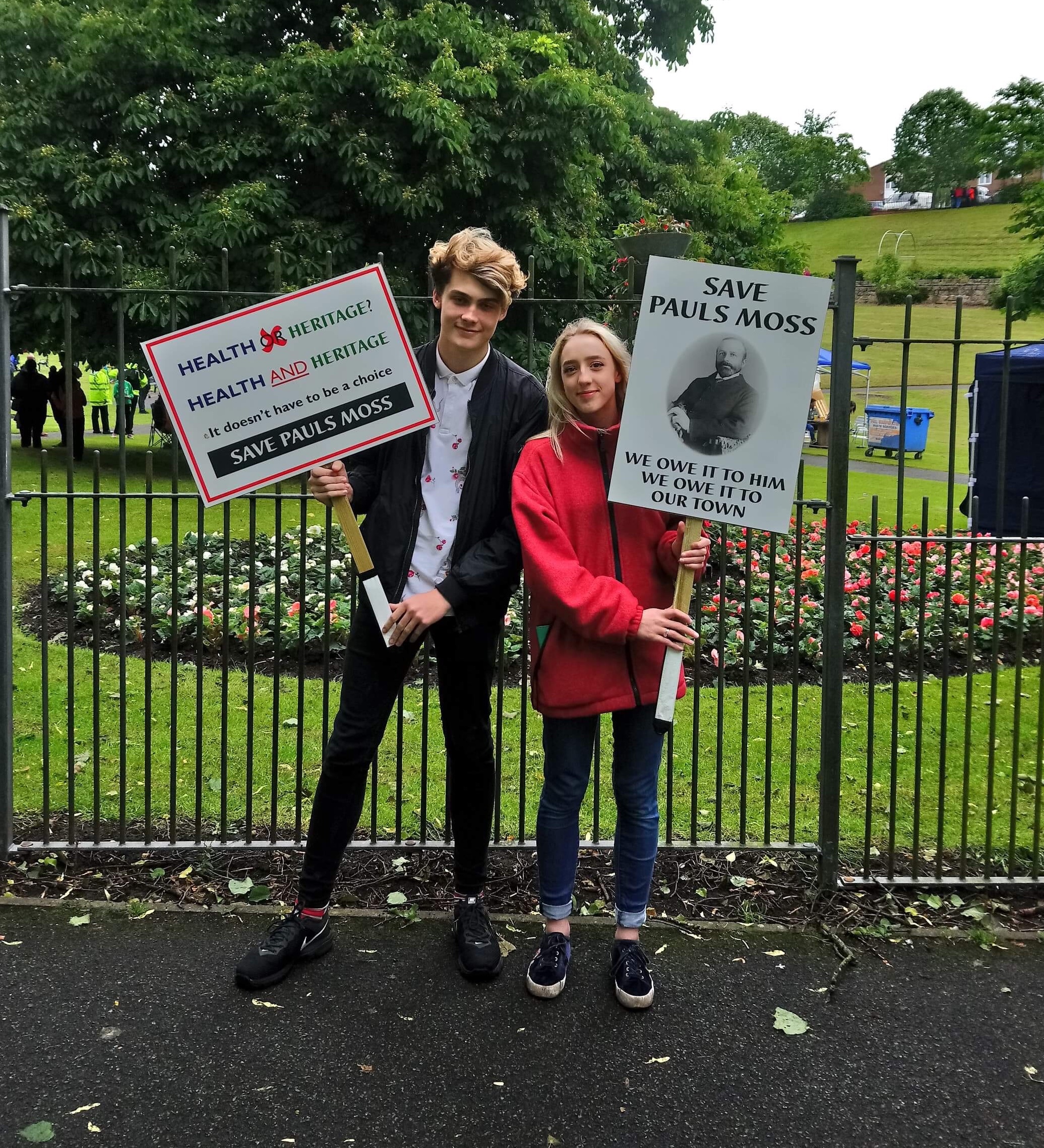 As something of a counter attack, the developers have rather cynically tried to turn the situation into a battle between health and heritage, claiming that if the House stays it will not be possible for Whitchurch to have a new medical centre.  They state that there is no other way for the growing health and social care needs of the town to be met without the loss of Pauls Moss House.  We have obviously set out to prove them very wrong.

On the advice of our lawyers and with the endorsement of Save Britain’s Heritage, we have commissioned award-winning London based architects and urban planners Burrell Foley Fischer to work-up an alternative development scheme. With a reputation for the imaginative re-use of historic buildings, the practice were well-placed to incorporate our beloved House into the re-development.  Their designs are responsive and sensitive, not only cleverly re-purposing Pauls Moss House as the community hub, but also providing the crucial medical centre and the same quantity of apartments desired by the developer.  In addition they have succeeded in including 1000sqm more of green space within the site than the Wrekin scheme.  The plans for the new dwellings are particularly successful, rather than a huge run of single-aspect flats often overlooking car park areas the accommodation is divided into separate villas with connecting garden rooms, each of the apartments being double-aspect. A much more humane and healthy form of housing with increased opportunity for greater biodiversity in the spaces around the buildings. 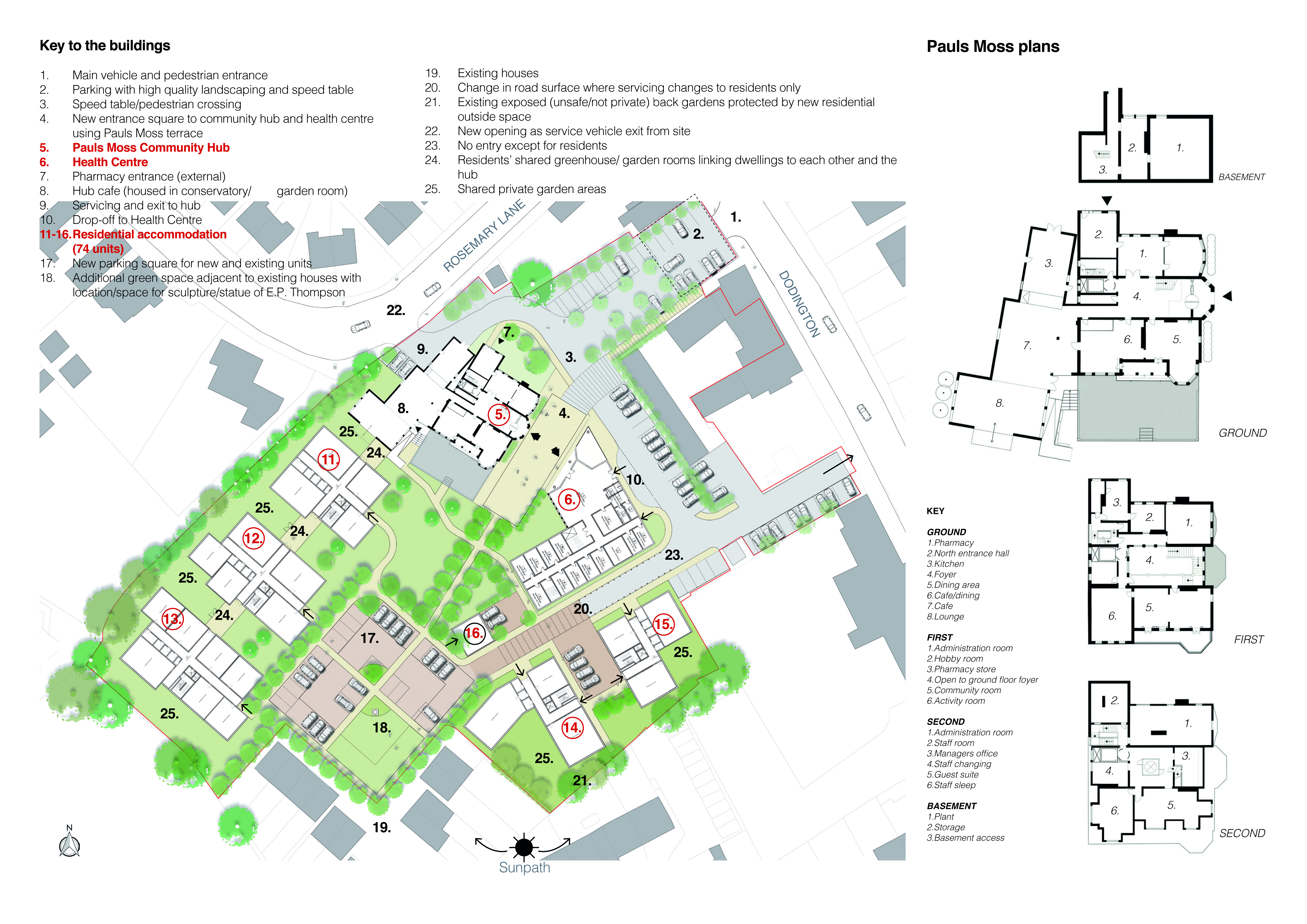 We recently submitted our commissioned designs as a formal pre-application to the planning authority who have given favourable feedback to the scheme and confirmed that it is a credible alternative proposal for the Pauls Moss site.  Crucially it demonstrates that it is unnecessary to demolish Pauls Moss House and cause substantial harm to the conservation area, thus providing strong material consideration evidence for our lawyer when the time comes to apply legal pressure.

Our hope is that on planning authority recommendation Wrekin will defer the imminent determination of their application and ‘return to the drawing board’ to revise their proposals.  Hopefully, that would be to something much more akin to our alternative scheme.  However, if this is not the case and the application continues to its determination by committee, who then grant planning permission, we will investigate the possibility of judicial review of the decision.

We are now seeking funds to be able to continue with our legal support and to recoup the architectural fees incurred.

The town of Whitchurch and the memory of its greatest benefactor deserve the redevelopment of Pauls Moss to be so much better than what is currently on offer. We'd like Wrekin Housing Trust to take the opportunity to enhance the setting of a valuable heritage asset, to create a fine amenity and new focus for the community whilst still delivering the health and social care facilities needed.

If successful, we also hope that this case may inform future developments of this kind, reminding developers of the importance of considering the historic and conservation value of an area rather than assuming that the wrecking ball can always swing because ‘health trumps heritage’.

We did it!! Pauls Moss House Saved!

This is our last few hours of fundraising on CrowdJustice.  The amount raised is a significant contribution to our costs and we would like to say a huge thanks to all who have so generously donated to our cause, we are very grateful for the assistance.

Hopefully all will be aware that on 25 June 2019 Shropshire Council’s North Planning Committee voted to refuse planning permission for Wrekin Housing Trust’s development of the Pauls Moss site, thus saving Pauls Moss House from demolition!  We are obviously delighted but our work is not over as we will continue to lobby to secure the House’s long-term future.  I am pleased to report that we have recently been able to start a dialogue with Wrekin Housing Trust and that we hope to be able to discuss our ideas for the renovation and repurpose of Pauls Moss House with them.  Keep an eye on our twitter and instagram pages for news.

Paula, Clare, Jane and all at Save Pauls Moss