Martin Snowden
Case Owner
I am one of the founder members of the Save Lupset Greenfields Group. We are a group of Wakefield residents who came together to stop the proposed new housing in this illegal pollution area.
Closed
on 01st June 2018
£695
pledged of £3,500 target from 13 pledges

Martin Snowden
Case Owner
I am one of the founder members of the Save Lupset Greenfields Group. We are a group of Wakefield residents who came together to stop the proposed new housing in this illegal pollution area.
Share on Facebook

Please support our call for a Judicial Review and save lives.

We are initially looking for funding to obtain a barrister's advice to determine whether there are good grounds to bring a judicial review.

I am a member of a group of over 300 local residents called the Save Lupset Greenfields Group.

We live in Wakefield, West Yorkshire, near to the M1 motorway between junction 39 and junction 40.

Why we need your help

Wakefield Council have passed plans for a housing development of 258 houses in an area less than 150 metres from the 8-lane, 114,000 vehicles per day M1 which already has proven illegal pollution levels. Both air quality and noise levels breach legal limits. The Council have deliberately ignored all of this.

Distance from M1 to new housing.   The majority of the housing is within 300m of the M1

Wakefield Council has illegal pollution levels, specifically in the area of the proposed new housing close to the M1, which is also an AQMA (which covers 1000s of residents).

Wakefield Council was specifically mentioned in the ClientEarth High Court case in February 2018 as being number 2 on the list of local authorities who have illegal pollution levels and requiring additional measures as they do not have any credible plan for reducing pollution levels below legal limits.

Pollution causes permanent and life long health problems.   It kills - long term exposure to air pollution attributed to 2,567 deaths in the Yorkshire and Humber in 2010.   In another article on the Yorkshire Post website Dr Andrew Furber, Wakefield Council’s director of public health placed the blame for the deaths on the city’s proximity to the M1, M62 and A1.

The levels of Nitrogen Dioxide breach the legal limit of 40 µg/m3 in our area.  Noise levels also breach the legal limits for both daytime and nighttime.  The cause of these illegal levels is clearly the M1 motorway.  The M1 motorway was converted between 2013-2015 to a smart motorway meaning 4 lanes in each direction running 24 hours per day every day meaning even more vehicles.

We raised all these facts about illegal pollution levels with Wakefield Council a few years ago but they ignored our correspondence.

Wakefield Council in their planning assessments have ignored the AQMA, completely dismissed levels of pollution in this area and the effects with the planning officer saying that the effects were "negligible".

All assessments were severely lacking in any detail or indepth research - they were not scrutinised by the planning officer.  The environmental impact study was written by the original planning officer and looks to have been written from a basic template.  The report seems more concerned with dust levels rather than anything to do with existing pollution.

For noise levels the assessment was also wholly inadequate, it it was for a cherry-picked time of only a few hours over lunchtime on one day.  Defra produced a noise level report a few years ago.  This already showed that the noise levels in the location of the new housing were already illegal.  As the M1 is now 8 lanes then the noise levels will have increased.  The World Health Organisation (WHO) has performed extensive research into the health impacts of noise levels and produced EU guidelines  (and through the European Commission).  The noise assessment does not take into account the busy times of the M1 motorway which are from approx 5:30am to 9:30am and from 4pm to 6:30pm).  Highways England is already paying compensation to existing residents for illegal noise levels as local residents cannot enjoy their gardens or leave their windows open.  In order to mitigate noise levels the plans are to use acoustic barriers, i.e. fences but the fences will not work as the noise coming from the motorway is not from one point but noise comes from many miles of the M1 and it would be from the other side of the fence rendering it useless).  From our understanding of planning law we thought that existing air and noise pollution levels had to be assessed fully, over a longer period of time and that the presumption is that any plan to build new housing in an area already with illegal levels of pollution would be rejected. 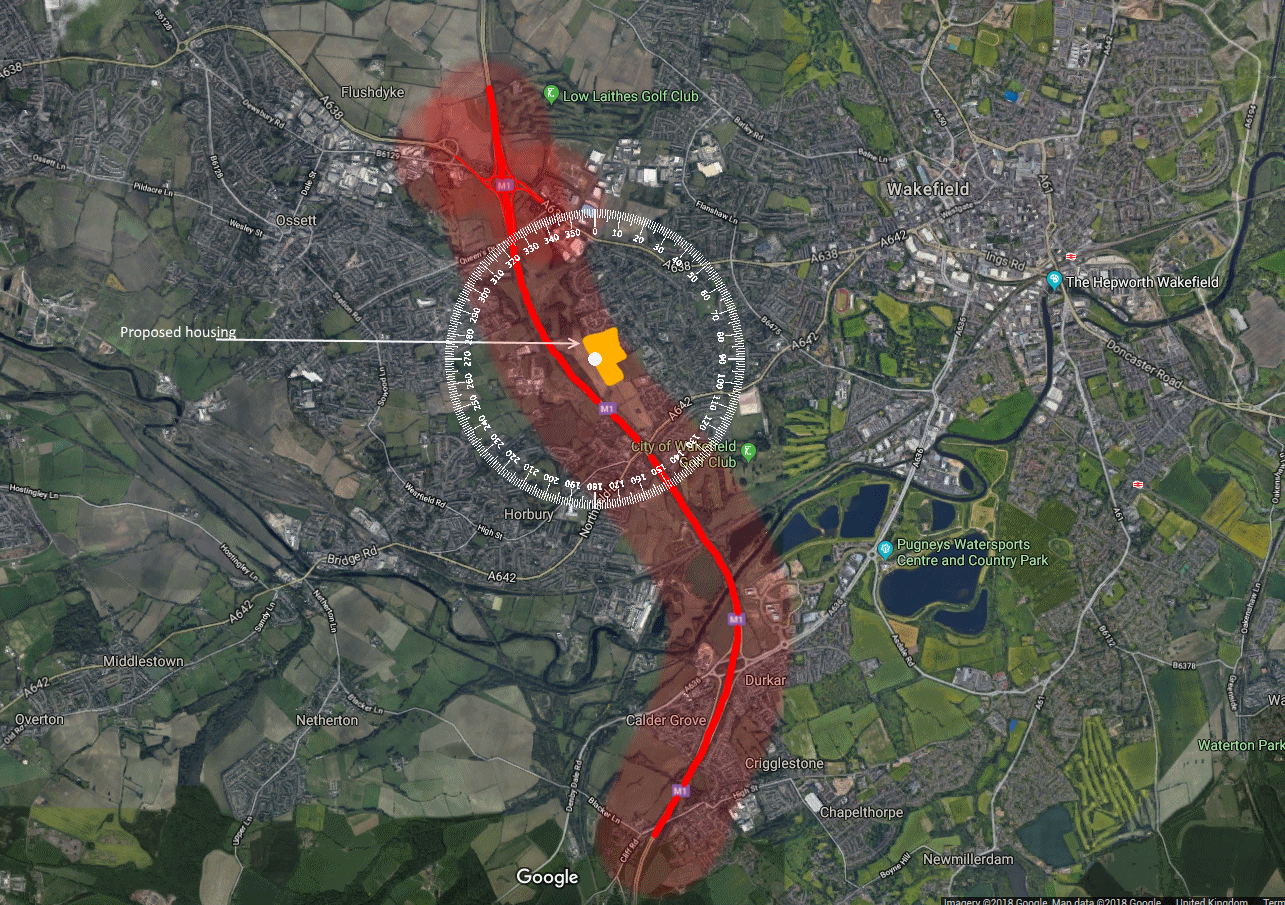 Noise can come from any point along the M1 (shown as a 4 mile long red line).   The M1 is also higher at J39 and J40 so it cannot be mitigated by acoustic barriers (fences).

Wakefield Council have also failed to consider the human rights of existing residents and any new residents.  The illegal pollution levels are already causing health problems for existing local residents (we have evidence, e.g. we already have the highest incidence of asthma for the whole of the Wakefield area) and the ONS has report stating that our healthy life expectancy is only 65 years in this area which is 10 years less than other local areas.  We do not want to be living in an area where our lives are cut short and where we cannot enjoy our properties because of noise and air pollution levels, which we thought were basic human rights.  At the planning meeting for the new development when the issue of noise levels was raised the Council thought that noise levels only applied inside when double glazed windows were shut, i.e. in summer when it's hot residents would be prisoners inside of their own houses because they could not open their windows due to the noise levels and air pollution.

As a first step the new housing needs to be stopped.  We are therefore requesting that you support us in taking Wakefield Council to court on the basis that they have ignored illegal pollution levels, their impact on peoples health for residents and breaches of human rights, and planning law so that they can go ahead with this new development.  It is a known fact that Wakefield Council is cash-strapped and seem to put money first before peoples health and any environmental impact of pollution.   We believe that if this is not challenged then other councils will find out that because of Wakefield Council's conduct in relation to this new housing development that they can also ignore all illegal pollution levels and build right up to the edge of all motorways in the UK putting 100,000's of people's health and lifespan at risk.

Illegal pollution levels are not the only issue.

The access to the new development is to be via Milton Road, which is not wide enough for two vehicles to pass each other.  We have had documented incidents where emergency vehicles could not gain access due to the road being too narrow.  The road cannot be widened as it is lined with trees protected by a tree preservation order (quite right as the trees have been there for over 75 years).  Milton Road was designed to support approximately 75 houses not 330+.  The development is planned to be built over 6 years.  No account has been taken on the impact on the lives of Milton Road residents that 6 years of site access will have on them.

The land is also ex-mining land.  Under the land of the proposed new housing development are mine shafts, coal faces and underground rivers.  The Coal Authority says that it is a very high risk area (which is their maximum level) and that they have substantial concerns about using the land.  These have been ignored by the Council and no conditions have been set for the quality of the land.

Part of the land to be used for the new housing is a playing field.  It was added as it is the only way of providing access via Milton Road to the original Local Development Framework (LDF) site.  The LDF is flawed as a major change has taken place in the environment since it was produced over 10 years ago, i.e. the major changes on the M1.  The law needs to be followed for the change of use of a playing field, i.e. Section 77 of the Schools Standards and Framework Act 1998.  The use of the playing field should have had the approval of the Secretary of State for Education before it was allowed to be used for any non-playing field use.  The Council have no such approval.

The schools in the area are full.   The adjoining school, Snapethorpe Primary, is the largest primary school in England.

The roads cannot support existing traffic levels.  The 'main road' to the site is Broadway which is an unclassified (class D) road.  Traffic estimates used flawed calculation methods, which can easily be proven inaccurate.

Please support our Judicial Review as it will save lives.

We are initially looking for funding to obtain a barrister's advice to determine whether there are good grounds to bring a judicial review.