Will Jennings
Case Owner
As one of many objectors to the Garden Bridge, I helped raise awareness about the project, challenged misleading claims of its promoters, & promoted the good work of other campaigners & journalists.
Funded
on 18th August 2019
£5,055
pledged of £30,000 stretch target from 148 pledges

Will Jennings
Case Owner
As one of many objectors to the Garden Bridge, I helped raise awareness about the project, challenged misleading claims of its promoters, & promoted the good work of other campaigners & journalists.
Share on Facebook

The Garden Bridge was a £200m+ vanity project proposed by private individuals and taken up as a grand projet by the former London Mayor Boris Johnson. It was initially promised to be 100% privately funded, but in fact by the time of its eventual cancellation most of the £53m wasted came from the public purse.

The people responsible for the project and the waste of public money have never been held to account. We believe that they should be, and that it is not right that the full cost of such a badly mismanaged and ill-advised project should be borne by taxpayers.

There is a risk that following the winding up of the Garden Bridge Trust the organisations and individuals responsible for the mismanagement of this project will likely try to prevent further inquiry or accountability.

This crowd funding will seek to reclaim as much money as possible for the taxpayer and serve as a stark a warning to politicians and their officials who act irresponsibly with our money to pursue such profligate, celebrity-backed vanity projects of dubious public benefit. 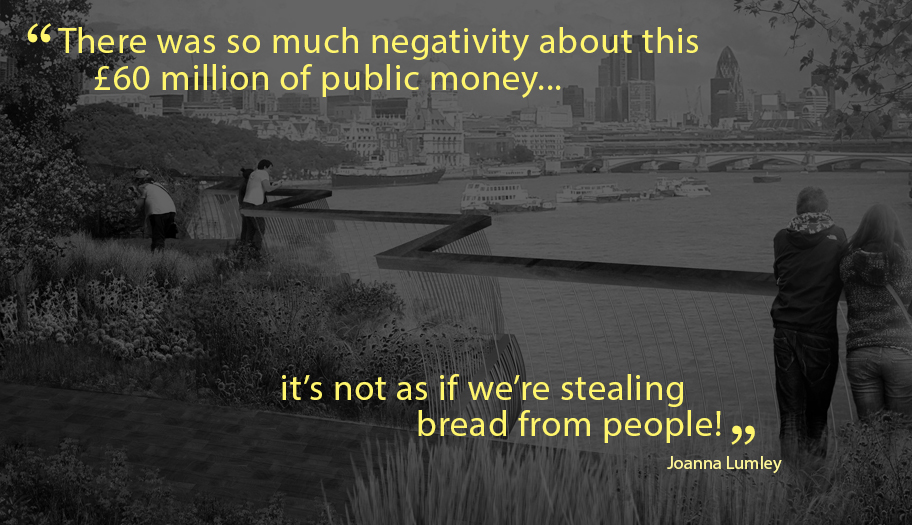 WHAT WAS THE GARDEN BRIDGE?

The Garden Bridge was a project led by celebrity designer Thomas Heatherwick, actor Joanna Lumley and former Mayor of London, Boris Johnson. Billed as a “needed” pedestrian bridge across the Thames, adorned by a beautiful garden, it quickly became evident this was an unobtainable vision likely to result in great financial, environmental and social damage.

Joanna Lumley called it “a gift to London” to mostly be paid for by private donors, but in truth this “gift” ended up costing taxpayers a whopping £43 million – and the bridge was never built.

Almost from the outset, objectors raised concerns that the bridge would have been poorly located, harmful to the environment, a financial drain, privatisation of public space, and a major disruption to the South Bank.

The local community, a few investigative journalists, and experts from architecture, engineering, heritage, environment, and procurement raised valid questions about the merit and management of the Garden Bridge project. Yet the project vaulted over planning hurdles and bulldozed through procurement rules that were meant to protect the community and taxpayer. While cost estimates kept increasing from an initial £60m to the final figure "north of £200m", warnings were constantly ignored, objectors patronised, and expert opinion wilfully disregarded.

A few public officials – notably at the Department for Transport – also raised ‘red flags’ along the way or even tried to stop the project outright. They were over-ruled by politicians and formally instructed to continue supporting the project.

The local community was instrumental in alerting people that the bridge would destroy a beloved local park and wipe out that avenue of mature plane trees that has come to define the South Bank. 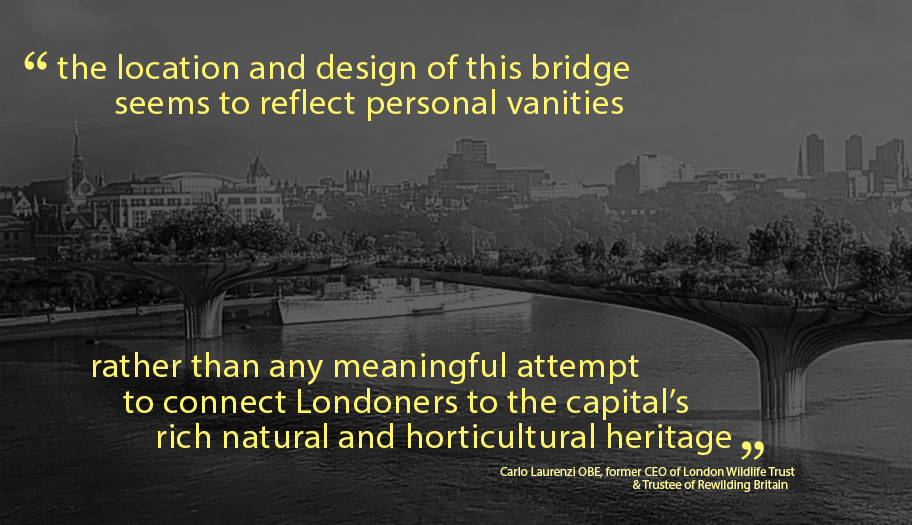 Over 23,000 people signed a petition to protect this public space and prevent any further waste of taxpayers’ money. Forming Thames Central Open Spaces (TCOS), they fund-raised for two Judicial Reviews, as well as getting over 23,000 individuals to sign their petition to save the South Bank public space from the private development.

Other social media joined the campaign and helped bring a wider awareness to the myriad of problems the Garden Bridge raised: for example, I ran a satirical competition. and campaign website A Bridge Too Far. Diligent journalism, in particular from The Architects’ Journal, and inquiries by Margaret Hodge MP and the GLA have slowly picked away at the official narrative to reveal:

WHY WE NEED YOUR SUPPORT

Ongoing pro bono legal advisors suggest we are in a strong position to take forward legal action with an ultimate aim of holding individuals or overseeing bodies accountable for negligence, with a view to having some share of the public funding returned.

CrowdJustice funds will enable us to seek the legal opinion of a QC. From this we could then proceed with appropriate legal action.

We are raising money for two stages:

WHY DOES THIS MATTER?

Throughout the project, the concerns of the community and the warnings of experts were dismissed by proponents of the scheme who recklessly spent public money at a frenetic pace, seemingly to push the project past a position of no return before Boris Johnson stepped down as Mayor of London in 2016.

To the extent that any other money was spent, most has been repaid in full to private donors. Taxpayers from around the country – the public funding was evenly split between both national government and London’s City Hall – have borne almost all the cost of this shocking waste of money.

To put this in perspective:

Allowing for inflation, the total cost of London’s Millennium Bridge (including the cost of fixing the ‘wobble’) was about £35 million. The award-winning Gateshead Millennium Bridge (the one that tilts) cost about £36 million. The proposed Diamond Jubilee Footbridge across the Thames has secured the land and a full planning consent and enjoys broad community support but cannot raise the £30 million needed for construction. In short, we could have had a completed bridge, with change leftover from the £43 million that the Garden Bridge Trust spent on a project that never put a spade in the ground.

The £43 million wasted on the Garden Bridge dwarves the money involved in other national scandals like the Parliamentary Expenses Scandal (c.£2.5 million), Arms-to-Iraq (£4.3 million), Kids Company (£3 million) or Cash-for-Honours (£18.3 million). All those cases – and others like them – led to police investigations, criminal convictions, parliamentary inquiries and/or financial compensation. Yet nobody involved with the Garden Bridge scandal has been held accountable in any meaningful way, and its promoters have not even offered a public apology.

The case we hope to bring will be the last chance to impress on politicians and public officials that recklessness has consequences and that gambling taxpayers’ money on profligate vanity projects is unacceptable.

HOW MUCH ARE WE LOOKING TO RAISE?

For the first stage we seek £5,000 to help us develop on our existing legal work to develop a robust legal opinion from a QC.

For the second stage we would need substantial support to take any legal action forwards. For this we have set a stretch target of £30,000. 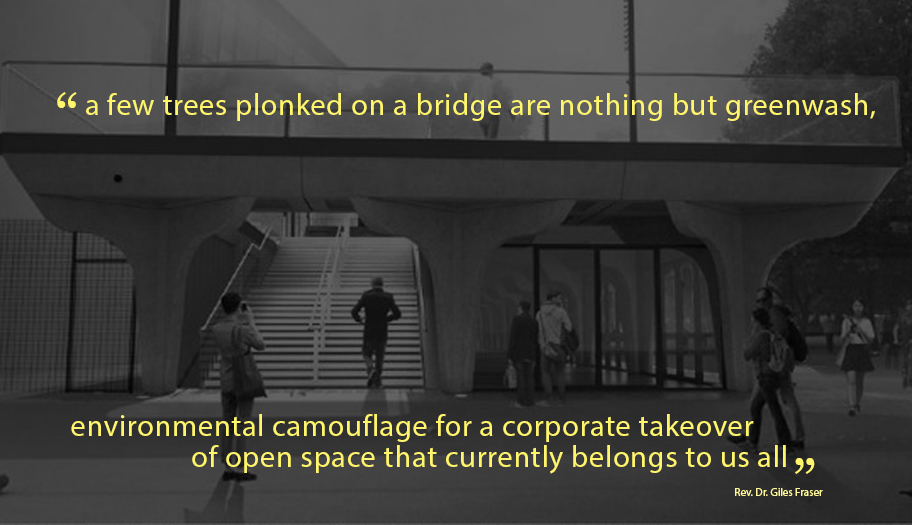 The whole history of the Garden Bridge development is well documented across mainstream media and in official reports and inquiries, with an archive of media coverage available on the A Bridge Too Far website.

A story of incompetence, arrogance, privilege and power: A brief history of the Garden Bridge
CityMetric

Garden Bridge: how the vision came crashing down
The Independent

Garden Bridge which cost the taxpayer more than £50m was 'a failure for charity' that undermines public trust, commission rules
The Telegraph

How was the Garden Bridge Trust able to spend £46m on a non-existent bridge?
Architects' Journal

Good riddance to the Garden Bridge: an eye-watering waste of public funds
The Conversation