Restoring Integrity Team
Case Owner
We're a group of UK citizens seeking to restore integrity to our democratic process following EU Referendum campaign conduct which we believe was unlawful and has led to deepening of public divisions.
Funded
on 15th April 2017
£10,610
pledged of £9,910 stretch target from 353 pledges

Restoring Integrity Team
Case Owner
We're a group of UK citizens seeking to restore integrity to our democratic process following EU Referendum campaign conduct which we believe was unlawful and has led to deepening of public divisions.
Share on Facebook

We are now URGENTLY seeking funds to start private prosecution

Independent Counsel Opinion supports that the law of Undue Influence, as strengthened in 2006, is relevant in relation to matters being raised and adequate to support criminal convictions. We are the…

In Brexit, the UK political system has failed the people on a massive scale.

Our future, and that of our children relies on the integrity of our democratic processes. This action seeks to safeguard democracy for everybody, by ensuring that UK electoral law – if found to have been broken – is upheld.

FUNDING IS NOW REQUIRED TO OBTAIN A FULLY INDEPENDENT COUNSEL OPINION TO VALIDATE THE MERITS OF THE LEGAL CASE.

ASSUMING THAT OPINION IS SUPPORTIVE, THEN FURTHER FUNDING STAGES WILL FOLLOW TO PROGRESS PRIVATE PROSECUTION.

Specifically, the allegations of corrupt practice involve six separate grounds of “Undue Influence” by the Vote Leave and LeaveEU campaigns. These include: 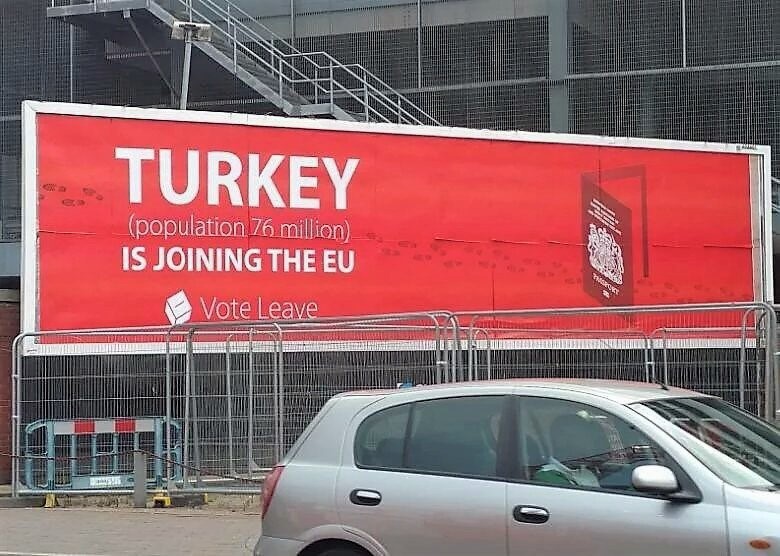 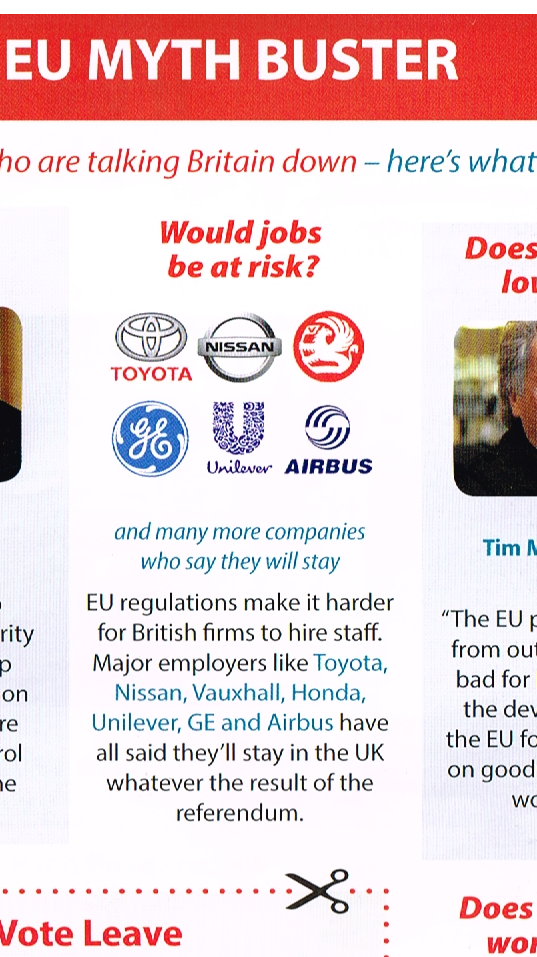 What is "Undue Influence"?

Undue Influence is a criminal offence under section 115(2)(b) of the Representation of the People Act 1983 (RPA 83), legislation which was specifically adopted into the EU Referendum to ensure its safe running.

We are the Restoring Integrity Team.  We formed from two separate groups who independently started compiling evidence under grounds of "Undue Influence" immediately after referendum campaigning ended.  The team consists entirely of private citizens, many having a background in law, and including the UK’s leading academic expert in electoral law, Professor bob Watt.

Please Note: The team also reviewed a number of common complaints about the Remain campaign - Stronger In, but concluded that the claims reviewed fell well short of our evidential tests being unlikely to meet any definition of a 'statement of fact'.  It should be noted, however, that this case does not preclude any potential separate action by another party.

Assuming a positive Counsel Opinion, the primary objective of seeking a Private Prosecution will be to safeguard the UK’s democratic process by securing criminal sanction for any individuals found to have deliberately set out to mislead voters, to act as a stark warning to those who might otherwise think to similarly undermine UK democracy in a future election or referendum campaign.

In the matter of the EU Referendum, the legislative Act omitted to provide any legal 'remedy' which might enable the referendum result itself to be challenged in a court, irrespective of the severity of any potential offences.  It is understood that this is because the referendum was purely advisory, and with the result being non-binding the duty falls to parliament to consider the political implications of any proven wrong-doing.

In theory therefore, a 'bad actor' might even have openly bribed people to vote a certain way, and there would be no opportunity to legally challenge the referendum result, only the actions of those involved.  Of course any decision or action that parliament should chose to give effect to on the back of a flawed referendum result, would nevertheless remain open to scrutiny or challenge.

Please note; the initial crowd funding target only covers the funds needed to obtain the independent opinion of a leading Queens Counsel. However, assuming that opinion is supportive of the case, it will provide the solid basis which we need to be able to progress with confidence and pace into crowdfunding to progress initial stages of the actual prosecution action.

Irrespective of political viewpoints on EU membership, this is YOUR chance to fight back to protect YOUR democracy by holding politicians involved in campaigning personally accountable in law to the same standards of conduct expected of everyone else, and to help prevent the UK politics being dragged further into the gutter in future campaigning.

Surely there can be few who would now argue that the conduct of the 2016 EU Referendum has left a "valuable legacy for the UK's democratic process", as one campaign team promised in their application to the Electoral Commission.

(There is more information available in the FAQs post on the website which explains what electoral law is, and why it is so important.  Please note, the post was written in November at a time when the team was seeking action via DPP.)

Why a Private Prosecution?

Our team continues to believe the case is a public interest matter, rather than a private one.

On 24th October 2016, we wrote to the Director of Public Prosecutions (DPP), setting out the allegations and evidence. When information is given to the Director that an election
offence has occurred it is her duty under section 181of RPA 83 to “make such inquiries and institute such proceedings as the circumstances appear to require”.

The case attracted widespread international press when the DPP confirmed the CPS would review the claims, with interest in Western democracy being shown as far away as China. 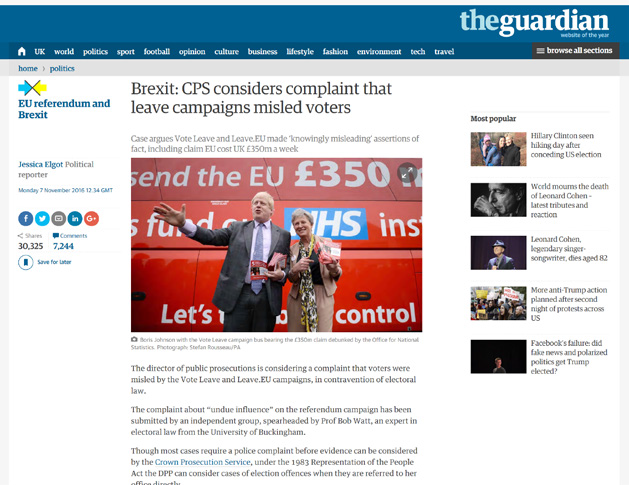 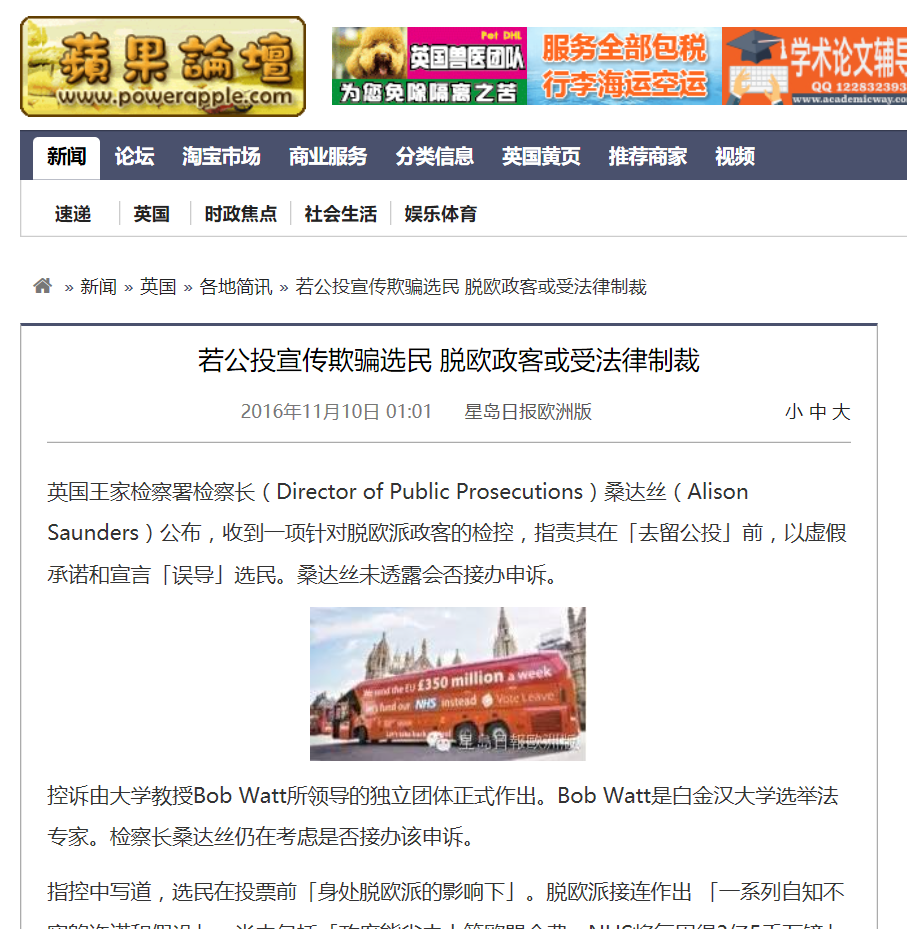 However, on 20th December, we received a letter informing the DPP’s decision not to institute proceedings.

In arriving at that decision, it is our belief that the DPP / CPS have not only formed their own, controversial interpretation of the s115(2)(b) legislation, but also importantly have not considered a key 2006 amendment to the law.

Our expert team maintains that the claims have merit, and that the legal arguments and evidence in support of s115(2)(b) are a matter which must be reserved for a Court and jury to consider.

Since Christmas, we have therefore been taking expert advice on the possibility of challenging the DPP decision via Judicial Review (JR). From a political standpoint it is a highly sensitive context in which we have asked her to act.  The legal advice we have received (pro-bono) is that a JR application is unlikely to be successful, not through any lack of virtue in the s115(2)(b) legal arguments or evidence, but simply because the wording of the s181 legislation gives the DPP an extremely wide discretion on whether to act, thus providing little firm basis for a Judicial Review court to compel her to do so.

Given the eminence of those providing the advice, we have reluctantly concluded that the only way now to ensure a hearing will be to instigate a Private Prosecution action.

What Will Happen to the Money?

It is our intention to only raise sufficient funds as are required at each stage of the case.

As soon as the funds are raised, we will instruct the independent Counsel Opinion.  All funds will be managed and released directly to the legal chambers by CrowdJustice in line with the agreed fee schedule.

Because of the public interest, the barristers chambers have agreed to act for significantly below their normal market rate despite their leading eminence in the field.

If the Independent Counsel Opinion is positive, then we will look to raise the funds needed to move forward a private prosecution as quickly as possible.

Our Commitment to Transparency

Although this public interest case will now, regrettably, have to be brought through a private action, the use of crowd funding means that transparency in proceedings will be essential.

Therefore, where it is possible to do so without prejudicing our case or any court order, the team will commit publishing regular progress updates to the case backers as soon as news becomes available.

Given the public interest, we will also continue to work with the media from time to time around any key updates.

Media requests should be directed in the first instance via email to media@restoringintegrity.uk

Thanks for your support,

We are now URGENTLY seeking funds to start private prosecution

Independent Counsel Opinion supports that the law of Undue Influence, as strengthened in 2006, is relevant in relation to matters being raised and adequate to support criminal convictions. We are therefore now URGENTLY funding to start a private prosecution against Vote Leave at this follow-up page:  https://www.crowdjustice.com/case/restoring-integrity-to-our-democracy-prepare-and-lay-information/