Join the legal fight to release the Russia Report

by The Bureau of Investigative Journalism

Join the legal fight to release the Russia Report

by The Bureau of Investigative Journalism
Judicial review
United Kingdom

The Bureau of Investigative Journalism
Case Owner
The Bureau is an independent, not-for-profit organisation that holds power to account, tackling big subjects through deep reporting that uncovers the truth.
Funded
on 13th November 2019
£43,032
pledged of £40,000 stretch target from 2,032 pledges

The Bureau of Investigative Journalism
Case Owner
The Bureau is an independent, not-for-profit organisation that holds power to account, tackling big subjects through deep reporting that uncovers the truth.
Share on Facebook

We are working hard to secure the evidence we need!

Thank you again to everyone who has supported us so far.

Our lawyers have been working on our case since receiving the response to our legal letter from number 10 on Tuesday. We have closed this page …

Support The Bureau in an urgent legal challenge to force the Prime Minister to release a report that has been blocked on alleged Russian interference in British politics.

We believe there is an urgent public interest in releasing the report before the general election so citizens across the UK have access to the facts. Please contribute to our legal action and spread the word by sharing this page with your friends, family and on social media.

The Bureau and other media organisations have been trying for weeks to gain access to this report but we've run out of road. It is our duty as journalists to do whatever we can to bring public interest information to light, and it’s that duty – free of any partisanship – that has driven our decision to launch this legal action to get this vitally important information into the public domain.

We need answers to critical questions about Russian interference in our democracy. Questions like: Has Russian influence affected the direction of British politics? Did it sway the Brexit referendum result? How much Russian money is supporting our political parties? To what extent have Russian bots invaded our social media?

We're taking action now because if any of these questions can be answered in the Russia report, it should be released immediately.

Click here to read our full letter to the prime minister and read our legal arguments.

Last month, Downing Street was sent the final draft of the Russia report by parliament’s cross-party Intelligence Services Committee (ISC). The report examined the threat that Russia allegedly poses to the UK, including how it may have undermined our democratic processes during the Brexit referendum and 2017 General Election.

But the publication of the Russia Report was blocked. Downing Street claimed that it needed more time to scrutinise the report - a decision called “jaw-dropping” by ISC chairman Dominic Grieve.

It is paramount the British public has access to information about potential Russian interference in our politics before we go to the polls. If the report is not released before the election, the public will not be able to cast their vote in full knowledge of who may have influenced it.

To support the case, we are asking people to come together and assist with our legal costs.

We're a small organisation with limited resources holding the powerful to account on behalf of citizens across the UK. Initially, we need to raise £10,000 but we will then need further support to cover a full judicial review.

There is always unpredictability with legal action. If for some reason our legal challenge cannot proceed and funds cannot be used to support this specific action, we will use any surplus funds to support The Bureau's investigations and reporting exposing the lack of transparency in this area.

We are working hard to secure the evidence we need!

Thank you again to everyone who has supported us so far.

Our lawyers have been working on our case since receiving the response to our legal letter from number 10 on Tuesday. We have closed this page for the time being while we make sure we have the evidence we need to issue proceedings.

We will post any updates as soon as we have them.

A huge THANK YOU to all those who have backed our challenge so far!

We are absolutely delighted that over 1,800 people have joined our challenge, pledging over £40,000 in just 4 days. It is truly uplifting that so many people have come together this quickly to back our efforts to make sure the actions of those in power are transparent and accountable.

How you can still help

The level and speed of support for our challenge has been incredible. Those brilliant people who have got us to £40,000 have put us in a position to be able to launch this action.

So without crucial support from this CrowdJustice appeal, as we are a small not-for-profit organisation, we could not have justified the risk of this significant cost.

If the report comes out before we launch legal action, we can direct any surplus funds raised to support more investigations in this area - something our supporters have highlighted as a clear need.

We’ve said from the start that we don’t know what the overall cost will be and that we want to raise awareness of this issue as widely as possible. For that reason, we’re keeping our crowdfunder open for now.

We will be reporting from court and we are chasing many other leads on foreign state interference in the UK. Please join our challenge here or sign up to our mailing list at the bottom of our homepage:

The PM has 3 days left - please keep supporting our challenge!

Although it is not possible to see the evidence given by the UK's intelligence agencies until the report is published, The Bureau has spoken with several external experts on Russian influence who described evidence they gave to the committee. You can read more on what we heard here.

Despite the serious concerns raised by the witnesses, they can offer only a small snapshot of what the committee heard, which also included evidence from all of the UK’s major intelligence agencies and others.

Time is running out to get this report into the public domain before the election. In a BBC interview just yesterday morning, the prime minister said there was “no evidence” of Russian interference in UK politics, but reiterated he did not plan to publish the ISC report before the election.

We need your help!

Please join over 1,400 brilliant backers and help us reach our goal of £40,000 before we move to launching a judicial review on Tuesday.

Join our challenge today and share widely to encourage friends and family to do the same. 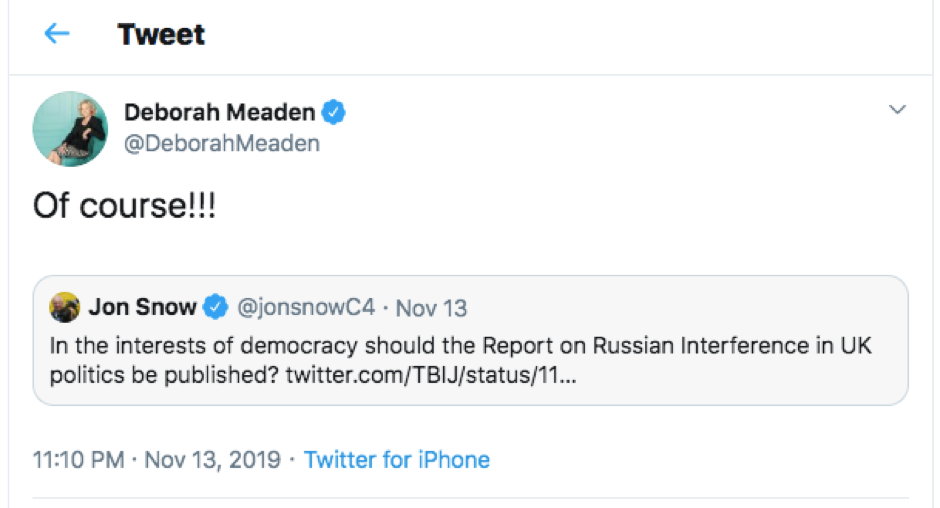 Over 450 brilliant people who support the release of the Russia report and care about strengthening our democratic processes have come together to help us reach £10,000 in less than 24 hours.

We've given Downing Street until Tuesday (19th November) to respond and release the Russia report of their own accord.

Our lawyers are ready to issue proceedings on the Bureau's behalf if the prime minister decides not to disclose the report.

When we go to judicial review, we're going to need all the help we can get. We don’t know yet what the legal costs will be but they could be substantial if we lose. So that's why we've upped our Crowdjustice goal to £30,000.

Please support our appeal and share widely with friends, families and colleagues.