Ralph Bulger
Case Owner
Twenty-five years ago, the brutal murder of my son James Bulger repulsed the nation. It still does today, which is why, as James’s dad, I am asking for your help
Closed
on 18th August 2018
£870
pledged of £10,000 target from 43 pledges

Ralph Bulger
Case Owner
Twenty-five years ago, the brutal murder of my son James Bulger repulsed the nation. It still does today, which is why, as James’s dad, I am asking for your help
Share on Facebook

Ralph Bulger is raising legal funds to return to court to fight for justice for his murdered son James and to campaign for the protection of children across the country.  Please show your support by contributing now and sharing this page on Facebook and Twitter.

Twenty-five years ago, the brutal murder of my son James Bulger repulsed the nation. It still does today, which is why, as James’s dad, I am asking for your help to make sure no other child is harmed as my baby boy was.

Ever since James’s murder, my family and I have campaigned for justice after two 10-year-old boys were convicted of his sexual torture and killing.

Those boys were Robert Thompson and Jon Venables who were released from a secure juvenile unit after just eight years and never served a day in an adult prison. I believed then, and still do, their sentences should have been longer for the crime they committed.

They were granted secret identities and life-long anonymity. A strict injunction was put in place by the courts to protect them and prevent details being made public about their lives. The injunction was granted on the basis that the killers had been rehabilitated but we now know for fact that Venables has not changed.

Both killers are now 35 years old and Venables has been recalled to jail twice for sex crimes against children. He is currently serving a 40-month prison sentence after pleading guilty to having more than 1,000 indecent images of young children.

We don’t support vigilante action or want the public to take the law into their own hands but we have always wanted clear recognition of the need to protect children from Venables. I have launched a new legal challenge in the courts to protect children like James in future from predators like Venables.

We need information and the authorities are not providing it. Both the Ministry of Justice and the Information Commissioner have refused our requests.

So now my brother Jimmy and I are attempting to alter the injunction to force the authorities to be more accountable about the handling of Venables.  For example, despite being banned from living in Merseyside or visiting the area, Venables flouted the rules by regularly visiting Liverpool unchallenged, partying, drinking and getting into fights.

The Government commissioned a so-called independent review, called the Omand Review, from a former Civil Servant so as to whitewash over the mistakes of the authorities.  Now the injunction is being used to cover up the further mistakes that were made leading up to Venables’ most recent conviction.

The Government do not want any accountability or scrutiny.  They have not given me information to which I am entitled.  It suits them to hide under the cloak of secrecy that the injunction provides.

I now have to force it out of them by going to Court.

Our fight for justice goes on because we believe the conditions imposed when the killers were first released in 2001 are now outdated because of Venables reoffending.

We want to make the authorities accountable for how Venables is to be supervised so that mistakes like this never happen again.

We want effective safeguards in place before he is freed from prison again. Things need to change. Most importantly, the courts and probation service need to be honest about how they will protect children in future.

Our campaign is focused on Venables but it’s also about changing the law and procedures to protect children from all sex offenders. The law has to move with the times and get priorities right, placing the safety of children at the very top of the list.

All this legal work is complex, lengthy and expensive. We have no funding at all.

The law says that all parties in court should be dealt with justly and on an equal footing but that is far from the case at the moment.

Venables has a team including one of the leading QC’s in the country in his camp another barrister and solicitors paid for by you the taxpayer. The Attorney-General and Ministry of Justice are similarly resourced out of the public purse.

If you support what we are doing, even donating a pound will help towards the cost of our legal challenge.

If you want to back our legal campaign, please donate to our crowd funding appeal - we nee dto raise as much as you can. Initially, we are setting achievable targets of £10,000 and then £60,000. If everyone does a little, this is achievable.

The appeal will be professionally managed with full transparency with funds going to pay for our legal work. The money is not for us as a family and any surplus will be donated to victims’ charities. We will send regular updates to our CrowdJustice page when we have news from our campaign. 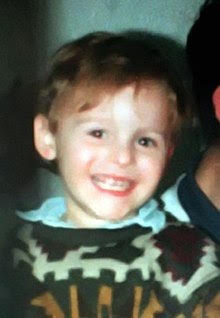 James was murdered before he reached his third birthday. He was the most adorable and beautiful little boy in every way and I still miss him every single day.

I can’t bring him back but I will do everything in my power to protect other children like him so no other family ever has to go through the pain and sorrow we have suffered.

If you can donate to our appeal we will be forever grateful and thank you to everyone for supporting my family all these years.