WE HAVE PERMISSION TO GO TO JUDICIAL REVIEW!!!!! 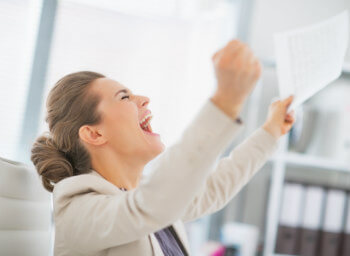 BREAKING NEWS; HANWELL NATURE HAVE BEEN GRANTED PERMISSION TO GO TO JUDICIAL REVIEW. 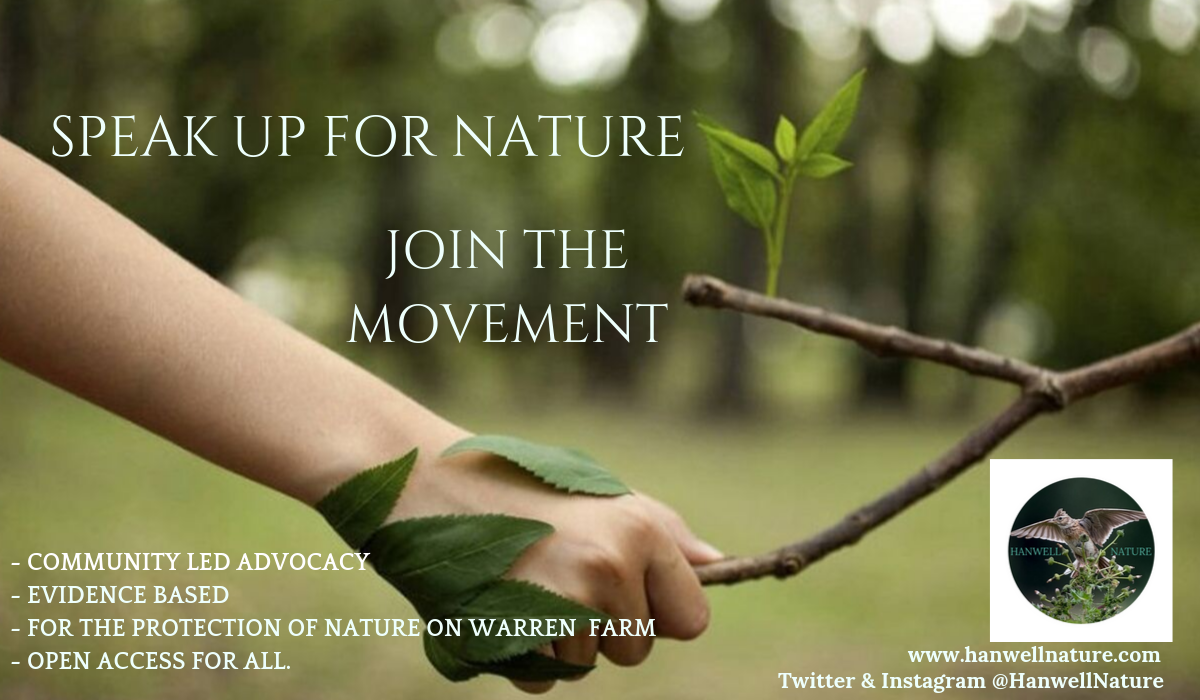 WHY ARE WE TAKING ACTION?

Hanwell Nature are a coalition of residents and environmental experts working together to protect 61acres of rare open meadow in urban Ealing, West London. We are opposed to the planning application granted by Ealing Council that rubber stamps the environmental destruction of biodiverse nature currently flourishing on Warren Farm, in order to make way for a VIP gated football training facility and car park. This is apparently necessary to meet the commercial requirements of QPR Football Club, a private limited company owned by billionaires.

In the last 6 years since Ealing Council ceased maintaining the land as short mown sports pitches, the developer attempted to meet various planning conditions, and planning permission was finally granted in Oct 2019.  In that time, nature has done what it does best and totally rewilded the site into a precious urban meadow within the Brent River Park.  Warren Farm is now a haven for nature, species-rich and of high ecological importance to London and the UK.

Warren Farm is a glorious, intriguing and humbling example of urban rewilding.  It is now teaming with nature at a time when we need it most.

WHY IS THIS SO IMPORTANT?

At a time of perilous climate change and the world’s attention firmly on creating solutions to protect our environment, Hanwell Nature began a passionate campaign to enlighten Ealing Council as to the many rare, endangered wildlife and vulnerable species that this inappropriate permission to build would entirely destroy.

Our 8 month campaign fell on deaf ears. See our Twitter and Instagram feeds @HanwellNature for the many pictures and tweets to Ealing Council and the Mayor of London asking them to reconsider this environmentally disastrous decision.

Left with no other choice, and armed with our legal team's considered advice that Ealing Council have made an error in the way it has approved the planning application, Hanwell Nature have taken legal action to ensure there is a judicial review of the decision in the High Court. Ealing Council has a duty to protect our open green spaces, and the environment that we all share. Therefore we need your help to make sure that happens.

We can’t just keep looking away helplessly while our environment suffers at the hands of ill-considered development. It's time to take a valiant stand for nature and ensure, legally if necessary, that our Councils are protecting it when considering developments. 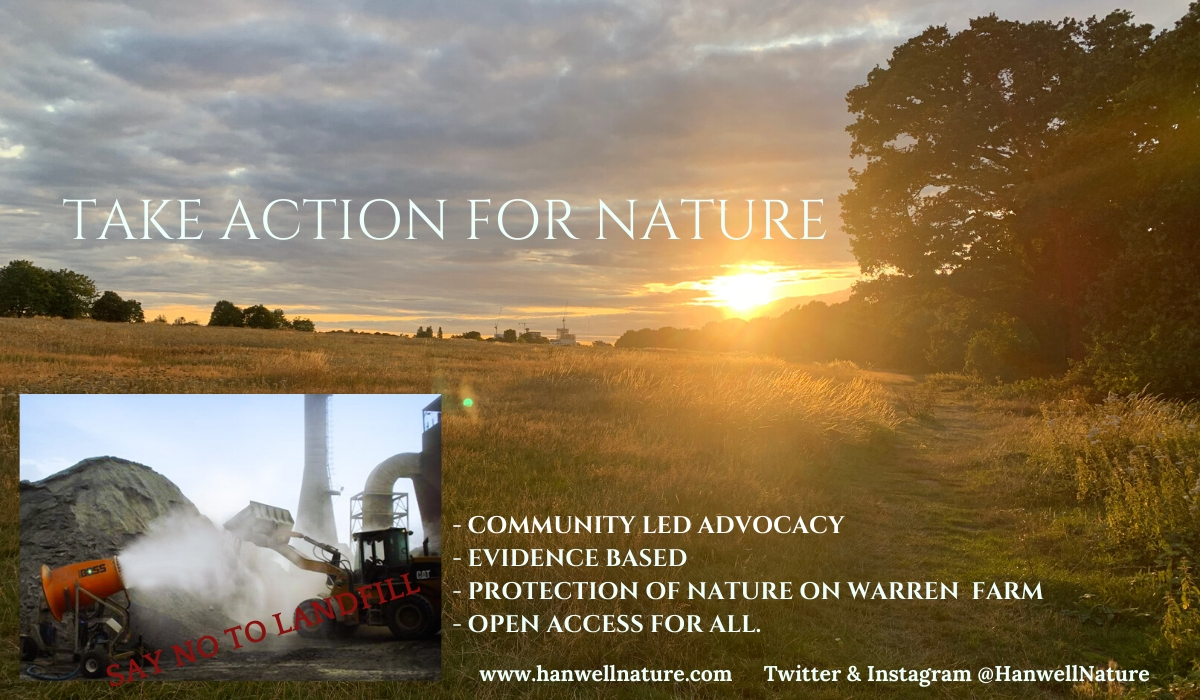 WARREN FARM IS ONE SUCH CASE

On the one hand, Warren Farm is an award-winning 61acre (24.9 hectares –  bigger than St James’s Park) meadow between Ealing and Southall. It is now home to an abundance of species such as skylarks, short-eared owls, foxes, hedgehogs, oak trees, rare clovers, beewolves, yarrow pugs and so many more. Hanwell Nature’s ecological experts have assessed the land and we can prove it is home to a wealth of common, rare and endangered wildlife, insects and plants – some facing UK extinction. Warren Farm is part of the Brent River Park, an acid grassland UK Biodiversity Action Plan (BAP) habitat, and is classified as Metropolitan open land, enjoyed by the public as a designated Community Open Space. Hanwell Nature now has evidence that proves Warren Farm should be reclassified as a Local Nature Reserve (LNR).

Whilst on the other hand, Ealing Council have made a decision to allow the destruction of this rare green asset without considering the drastic environmental impacts such a development would cause.  In other words, they have made an error in the way they approved the planning proposal. This must and can be legally challenged through the process known as a Judicial Review, that would review the decision in the High Court and we need your help to do that.

LANDFILL AND CAR PARK vs NATURE AND CLEAN AIR.

You can read more about the deeply concerning environmental and social impacts at www.hanwellnature.com created from the proposed importation of 180,000 cubic tons of landfill on to the meadow in 1 truck movement every 4 minutes on and off site for up to a year, and the many devastating affects this will have on all the surrounding green spaces. Destroying load by load the home of many creatures, flora and fauna permanently removing their existence, closing the land off permanently from open public access.

Once gone it is lost forever, and if the unrelenting wanton destruction of nature concerns you as much as it does us, we need your support to challenge this through the courts.

THIS IS NOT A GOOD DEAL FOR LONDONERS OR THE ENVIRONMENT.

There are many more reasons why the development is not a good deal for residents of Ealing, London and the UK. You can read the full background why this is a bad deal on our website. 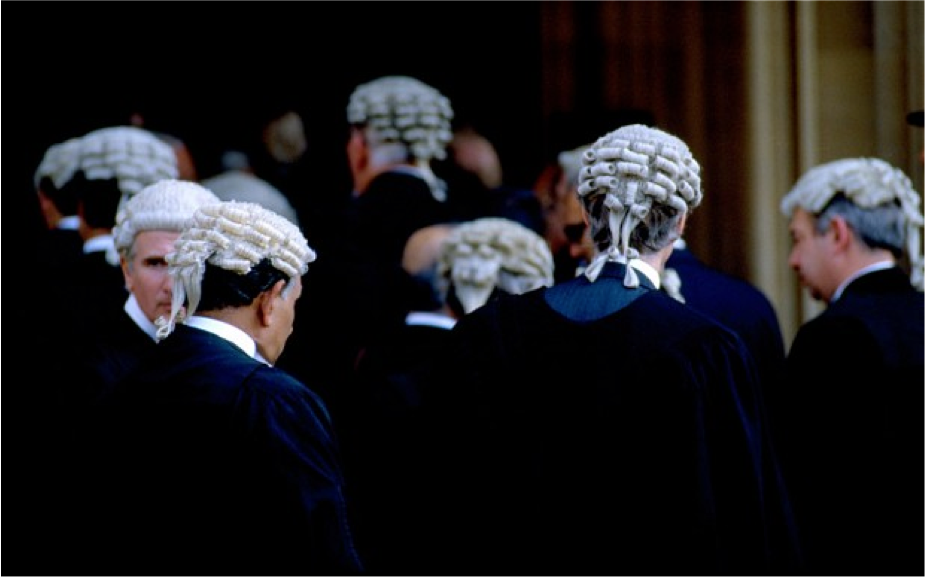 By law, projects which are likely to have ‘significant environmental impact’ must undergo an Environmental Impact Assessment (EIA). This ensures that both the public (those affected) and Ealing Council (the decision maker) are properly informed of the impact of a development. Allowing the public to be consulted and feedback their observations prior to Ealing Council making any decision on whether to grant consent or not for the development. In other words, the true environmental and social impacts of a development are established and published, with public consultation and weighed against any benefit the public might receive from such a development before any decision is made to allow such a loss.

That did not happen in this case.

Ealing Council made the decision not to require an EIA, regardless as to the obvious significant environmental impact from a 10 month landfill process that would result in a devastating loss of wildlife, biodiversity, and societal loss of access to such a cherished community open space.

WE HAVE TAKEN ACTION - JOIN US! 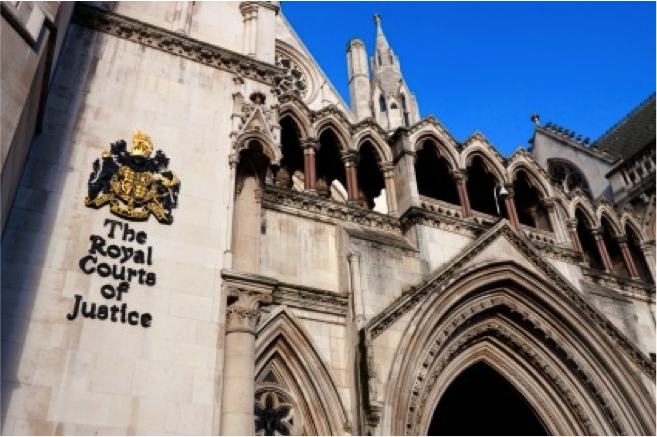 We are waiting for Ealing Council and QPR to respond to Hanwell Nature’s claim. They have the option to agree to an EIA or stand by their decision not to require one. If this is the case then we have no other choice but to proceed to seek leave to begin a judicial review of that decision in the High Court.

To cover the cost to take it through to permission, we will need to raise £11,000 with a stretch target of £35,000 to fund the complete review process.

Since May 2019 Hanwell Nature has been funding the initial legal and campaign costs through donations from concerned residents, whilst the team and ecology experts have given their time, expertise and dedication for free.

We believe we are not alone, and that you will help support this truly worthy cause, and that when we are successful the legal decision will help set a precedent that will support other struggling campaigns to protect nature from inappropriate development. This can then be used by other groups to establish good environmental practice in the planning process.

We have come so far and strongly believe we have a high chance of success, and we feel we have a responsibility to the many people affected, who care deeply about this proposed tragedy for nature, both locally, across the UK and the world, at a time when climate crisis reminds us that we all live in one shared home and every green space matters.

LET’S  DO THIS TOGETHER! 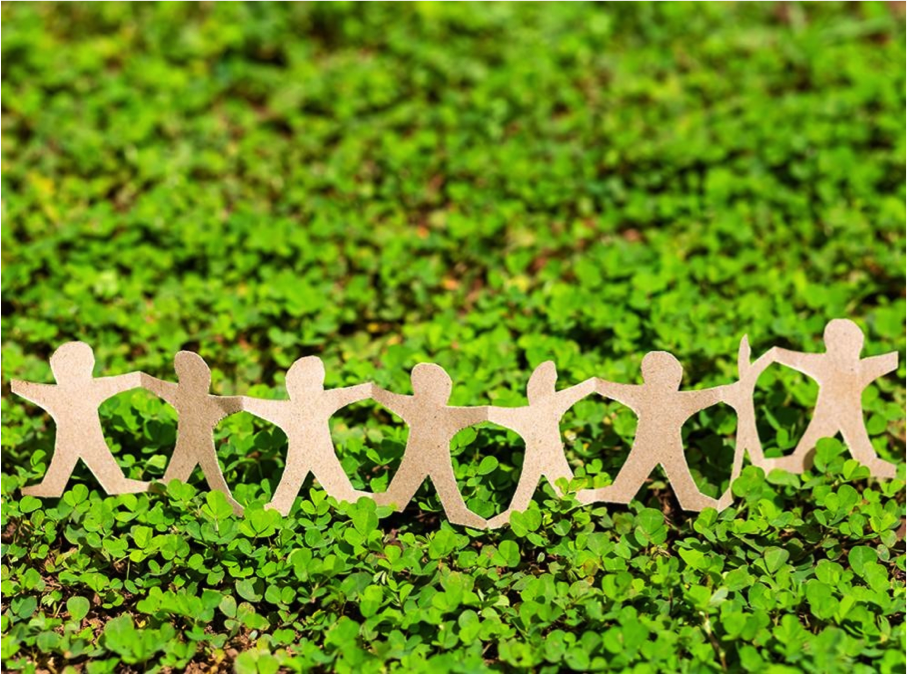 Please give generously, every donation helps - join us in standing up for nature, for UK wildlife and future generations to come. 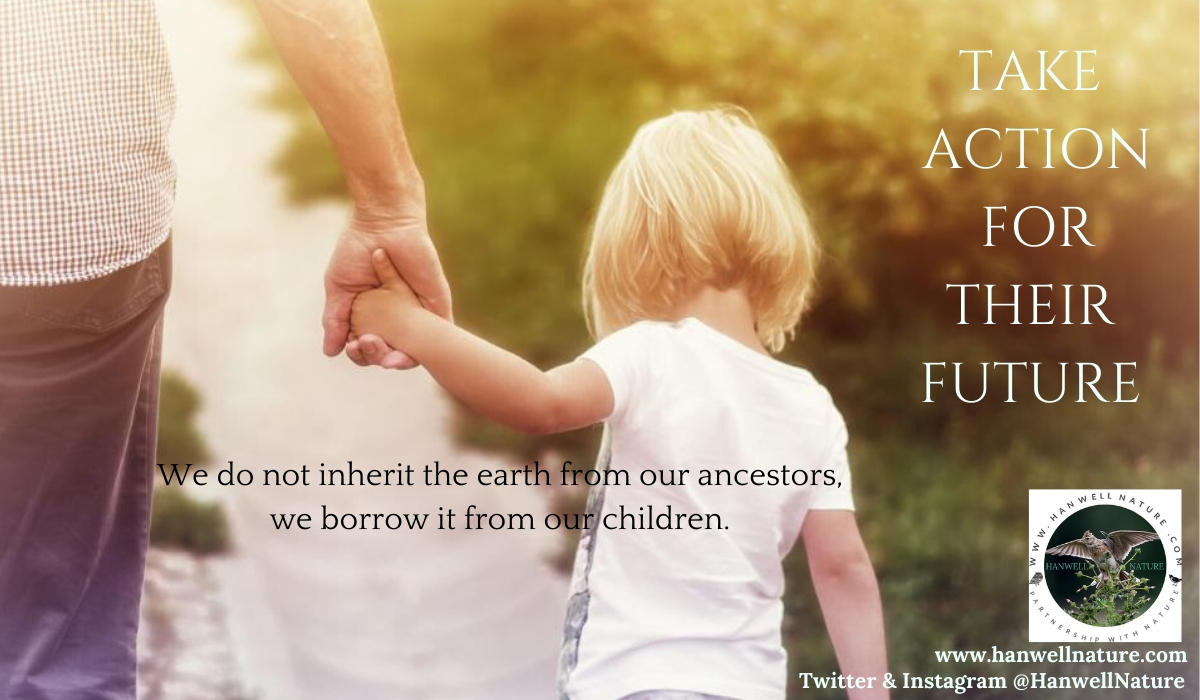 WE HAVE PERMISSION TO GO TO JUDICIAL REVIEW!!!!!

BREAKING NEWS; HANWELL NATURE HAVE BEEN GRANTED PERMISSION TO GO TO JUDICIAL REVIEW.

We are beyond delighted to be able to share the news that yesterday The Hon Mrs Justice Elizabeth Laing DBE ruled in our favour.

She confirmed that our case against Ealing Council has sufficient merit and we have been granted permission to proceed toward a full Judicial Review of Ealing Council’s decision not to require an Environmental Impact Assessment (EIA). This means the Judge saw clearly that we have an arguable case, and she has allowed it to be heard in full at a 2 day Judicial Review hearing.

This is truly fantastic news as we continue to work towards protecting Warren Farm and the invaluable biodiversity recorded here for the benefit of all - for nature, for wildlife, the environment, the community and for future generations, at a time when the protection of vital green spaces like Warren Farm, matter more than ever.
We are now busy preparing for Judicial Review with our legal team, which means we need to reach our next Crowd Justice target of £35,000 to enable us to move forward to #ProtectWarrenFarm.

We have been blown away by the support and generosity you have shown Warren Farm during these unprecedented times and we want to say a big-hearted THANK YOU because we simply wouldn't have been able to get this far without you - your continued support means the world to us and the many that enjoy Warren Farm.