by Forward as One

Forward as One
Case Owner
Forward as One is a pro-independence association dedicated to self-autonomy for Scotland. This action is being raised on the back of a promise to do so if prerequisite conditions were met.
Funded
on 05th August 2020
£225,315
pledged of £300,000 stretch target from 7,911 pledges

Forward as One
Case Owner
Forward as One is a pro-independence association dedicated to self-autonomy for Scotland. This action is being raised on the back of a promise to do so if prerequisite conditions were met.
Share on Facebook

Big News! It looks like we might have absolutely nailed it with the timing of the #peoplesas30 going to the inner house.

This is the second fundraiser for the case MARTIN JAMES KEATINGS v (FIRST) THE ADVOCATE GENERAL FOR SCOTLAND; (SECOND) THE LORD ADVOCATE; and (THIRD) THE SCOTTISH MINISTERS (Commonly referred to as "The Peoples Action on Section 30" case.)

The case is seeking a declarator of the Court, that the Scottish Parliament has the power to legislate for the holding of a referendum on whether Scotland should be an independent country, without requiring the consent of the UK government or any further amendment of the Scotland Act 1998 (the “1998 Act”).

December 2019 : Our solicitor Elaine Motion of Balfour +Manson LLP,  instructs Aidan O'Neill QC to provide an opinion on the constitutionality of the Scottish Parliament legislating on a second referendum on Scottish Independence without the consent of Westminster, after yet another rejection of a section 30 order by the Prime Minister - This opinion is available here: Legal Opinion

January 2020 : We commence fundraising for the case reaching £43,658, of which £40,263.62 is transferred to the solicitors directly by CrowdJustice after deduction of appropriate fees. Transfer Confirmation

January 30th 2020: The Advocate General of the UK Government is issued with pre-litigation correspondence from our solicitors at Balfour+Manson and the Scottish Government are also copied into that correspondence. : Correspondence

February 14th 2020: UK Government responds by stating that they do not believe that the Scottish Parliament has the authority to legislate for a second referendum on Scottish Independence without the consent of Westminster (“Section 30 Order”).

March 20th 2020: A court summons is issued in the name of the Convener of Forward as One, overseeing the litigation. Court Summons

Since March 2020 we have had to deal with a number of administrative motions. The first was resisting a motion by the Scottish Government to halt proceedings for 3 months. We won this motion - and the 8 week "adjustment period" commenced, being the time in which parties refine their arguments. This ended on 22nd of July.

During this process, we were subject to another motion by the Scottish Government, which was ultimately dropped in the late stages, after our legal team had already had to invest a hefty amount of energy in working on it.

The third administrative motion, which was with respect to a protected expenses order – seeking to limit the costs of litigation -  has been refused by the court.

What are we trying to achieve? - To prove that a referendum on Scottish Independence can be legislated for at Holyrood without the consent of Westminster under the law as it currently stands.

What is the next step in the case? – The next step is preparation for a legal debate. At the moment we are unable to disclose the contents of the submissions by the opposing parties, until we have permission to do so. As always,  when this changes, our backers will be the first to know.

Our next stage is to lodge with the court- the "Open Record" which is, in effect, the respective arguments and submissions of all the parties to the case in one organised document. Its purpose is to allow easy reference to specific matters within those arguments for all parties (including the court). Once this is lodged, a legal debate hearing of 3 days will be scheduled.

In other words, to steal a quote from a certain politician: This case is now “oven ready” to proceed to oral arguments.

Why is this fundraiser running:

As we said previously, we would approach the movement for further fundraising when it became necessary. By way of an estimate. Total costs are projected by the court in the ruling on the protected expenses order to be somewhere in the region of £195,000 in total. We deduct from that total, the sum of £40,000 from the previous fundraiser and we are left with £155,000.

This is the target we are aiming for.

To be clear, if we do not reach our target, legal action will have to be discontinued.

For a case like this, it's not just a case of one solicitor per party to the case. On our side we have a solicitor advocate working with a multitude of solicitors at partner and associate level, instructing an advocate and juniors. With the other parties, we have the Advocate General instructing senior counsel with junior counsel; and with the Lord Advocate and the Scottish Ministers, we have them instructing senior counsel with a solicitor-advocate. This doesn't even begin to account for all the other staff who assist. Costs obviously mount quickly.

As with the last fundraiser, those donating are reminded of several things. Firstly, you cannot set up a fundraiser on CrowdJustice unless you have a verified legal counsel. CrowdJustice do not allow a fundraiser to launch without confirmation of this.

We never see the funds, the transfer of the funds is dealt with directly by CrowdJustice and our solicitors at Balfour + Manson LLP. Any unspent funds at the conclusion of the case are subject to Crowdjustice’s refund policy.

In order for funds to be transferred to the solicitors, it needs to hit the "initial target". We have set this target to £10,000 (which is way below what we are seeking). The target will then change to £155,000 when the fundraiser hits £10,000

We have opted to do it this way so we can leave the fundraiser open for longer and so people can continue to donate.

Big News! It looks like we might have absolutely nailed it with the timing of the #peoplesas30 going to the inner house.

With Mike Russell confirming to SNP Ayr branch that the referendum bill is due to be published within weeks, it is no longer "academic, hypothetical or premature".

The lord advocate can no longer say the bill does not exist right at the time we're heading for the Inner House. Backers should have received an update from me via email a few minutes ago. But everyone should be prepared

Now is the time to push hard on the #PeoplesAS30 because this is going to be handbags at dawn!

We are as prepared as we can be. The movement has responded with the dedication I've come to expect from them and our legal team has risen to the challenge.

Never forget that this is the people's action.

Dial-in details for the hearings:

Dial-In details for the Peoples Action on Section 30 case on the 21st and 22nd of January have now been provided by the court. You can find them in the event description here: https://fb.me/e/1qNTHWsUF

There will be a hearing on a motion at 9.30am on Tuesday, 12th January before Lady Carmichael.

This will not effect the hearings on the 21st and 22nd of January.

Those wishing to listen in to proceedings are asked to contact the Outer House of the Court of Session.

Please quote case reference A74/20 to the clerk of court and ask for access to listen in to proceedings. The court has advised they are standing by to give those details on request.

We can confirm that after the previous hearing, Lady Carmichael has confirmed that the case should be heard fully in a  2 day hearing in the Court of Session on 21 and 22 January 2021.

For those seeking access to view the hearing on the 4th, those who have already requested access from the court have been advised of the following and we're passing it along so the court is not inundated with emails requesting access. In responses to others they have stated:

"For those interested in dialling-in to the Martin Keatings v the Advocate General & Others hearing on 4 November, please see the Scottish Courts and Tribunals web page for access details - which will be published once available. All future requests should be made to onlinehearingaccess@scotcourts.gov.uk.  All other enquiries will be responded to." 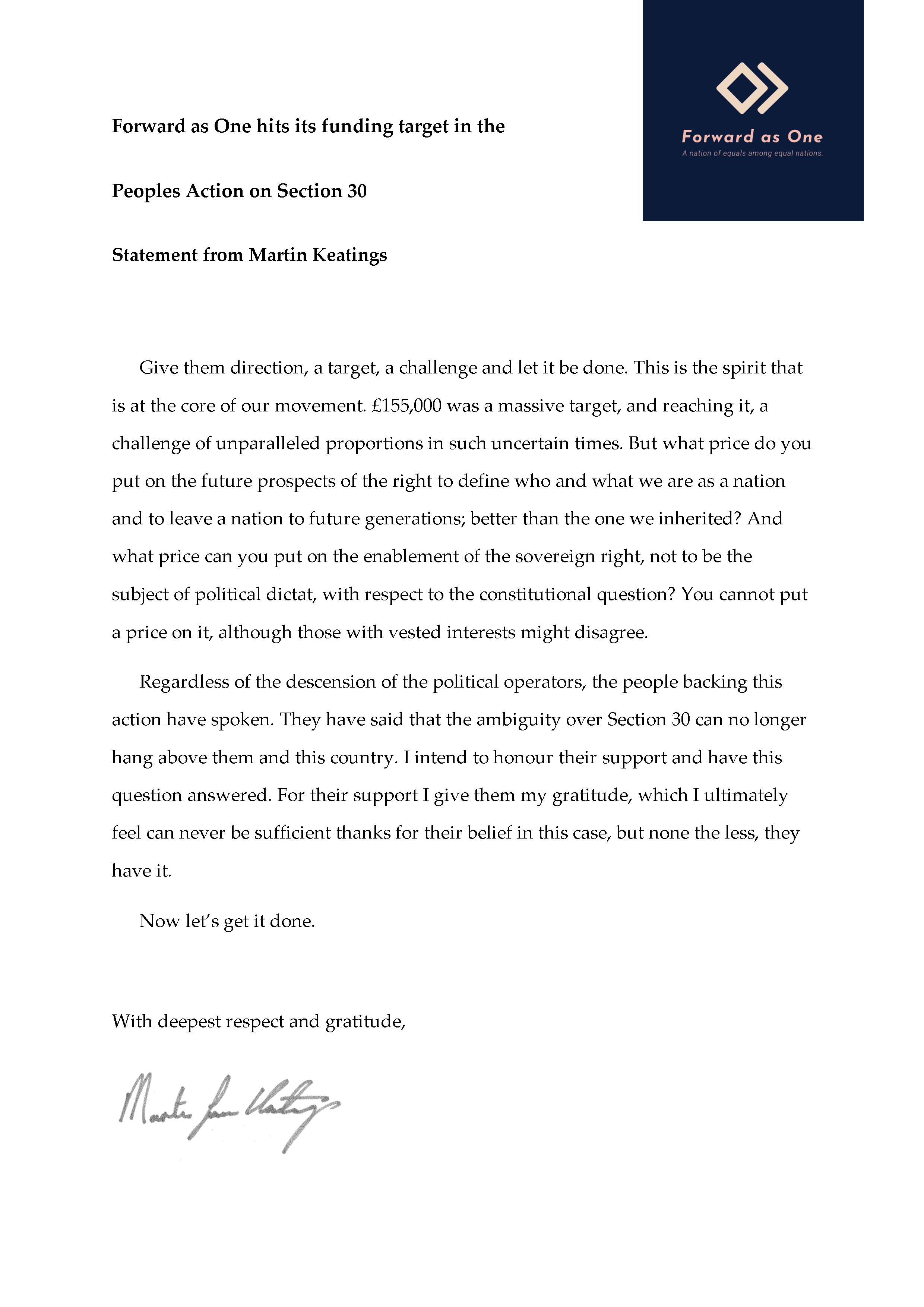 Tonight I update you on the fact that we're now going to court.

We have now received the interlocutor confirming that the closed record has been received by the court and a By Order (Adjustment) Roll hearing has been fixed for Wednesday 30 September.

In English: The interlocutor is the order of the court which states that they accept the "closed record". The closed record is basically a combined folder of all the pleadings (submissions) for ourselves and for the other parties to the case, all organised into an easy to understand, well laid out and easily accessible pack for the assistance of the court. In a nutshell, it is a single hymn sheet that all parties can reference during court proceedings.

The "By Order (Adjustment) Roll hearing is the first hearing in court which determines the procedure for the rest of the verbal hearings. It is standard and pro-forma and the court will decide details like how many hearings there will be, how long will be put aside etc. This will be slated for the 30th of September.

But that's it. We're off to the races folks!

Thankyou to everyone. Please keep it up, you are doing brilliantly!

Peoples Action on Section 30 moves to next phase.

At 1.13pm, the following email was sent to our legal counsel. 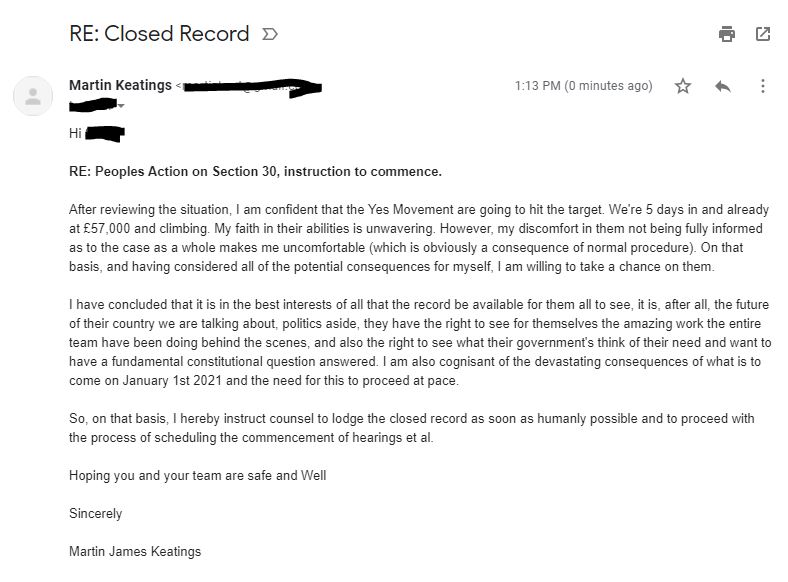 Peoples Action on Section 30 | In the National

Peoples Action on Section 30 has featured in the National Newspaper: