Tannah
Case Owner
I am a 29 year old recent law graduate in Oxford and am passionate about climate justice. I first got involved with XR at the April rebellion and have advocated for non-violent direct action since.
Funded
on 25th July 2019
£6,416
pledged of £10,000 stretch target from 83 pledges

Tannah
Case Owner
I am a 29 year old recent law graduate in Oxford and am passionate about climate justice. I first got involved with XR at the April rebellion and have advocated for non-violent direct action since.
Share on Facebook

We are Oxford XR. We are a non-violent direct action movement demanding urgent action in the face of the climate emergency. Our members are people in the Oxford area and surrounding villages who agree with the aims and methods of Extinction Rebellion.

In April, around 20 of our Oxford XR rebels were arrested for our non-violent civil disobedience actions during London’s rebellion week. So far, five of us have been charged, with the rest of us now expecting to be charged.

Our arrestees span many demographics - we are students, professionals, academics, retired grandparents, creatives, baby boomers, millennials, gen x and gen z! We all have different backgrounds and stories, but are united by our drive for meaningful change and Extinction Rebellion’s principles.

Hi! My name is Peter King. I am a 64 year old architect. I first heard of Extinction Rebellion in December of 2018 when news of the five bridges protest (in November 2018) started to circulate. I have been aware of environmental catastrophe for a long time but until XR had little opportunity to try to do something myself. I was so blown away by the bridges action that I joined XR immediately after.

Like many others, I was aware that arrest was possible for me and I was willing to do that like many of my friends in XR. What does my getting arrested matter in relation to the catastrophe bearing down, and now upon us?

‘If you don’t think small things matter try sleeping in a room with a mosquito’, the saying goes. Well, if we can get our government to do something about the UK’s carbon emissions I am willing to be that mosquito. And if Extinction Rebellion can’t do it, nobody can.

For many of us, being arrested and charged can be a financial burden. There are travel costs, taking time off work, and court and legal costs. These range from a few hundred pounds for a ‘guilty’ plea, to potentially thousands for a ‘not guilty’ trial. Trials are in our interests as a movement, because they showcase how many of us are just ordinary people, and thus make the authorities look vindictive towards its best own citizens.

Citizens whose only ‘crime’ is to shout out that ‘OUR HOUSE IS ON FIRE!’ I would ask you to give whatever you can spare for those that have put themselves forward to be arrested. We can and will bear the cost ourselves if we have to, but a contribution from fellow rebels, however small, is like a small pat on the back for us, a recognition that we are a team, a community, not just individuals.

With thanks and best wishes,

It is not possible at this stage to project how much will be needed to support our arrestees, however we know it’s likely that each case will cost several thousand pounds in legal fees. We are starting with an initial target of £15,000 which we intend to stretch as and when more of us are charged.  The charges we face are for obstruction of the highway and public order offences.

My world is bound up with yours. My future – disappearing – with yours. Our brief bodies, whisked together from the same dust, are trapped in an hourglass running out of sand. We have so little time left to save our dying world – we are the last generation who can. Our actions now will swerve the course of human history. They could decide whether humans are history.

When I was sat in the road in Parliament Square, the police officer asked me to consider my future. I wish I’d had the presence of mind to tell her, “I am”. The least I can do is sit in the dirt, so that others don’t have to die in it.

You don’t have to donate your money. But please donate your time – to taking action, however small. To spending time in nature. Above all, to telling the truth. Besides this beautiful home in the stars, it’s the greatest thing we will ever share.

I always have been interested in environmental issues and towards the end of my career in design, felt uncomfortable about the impact my work practices were having on our planet's destiny.

I attended a talk in Oxford in March 2019, learnt about XR and joined an affinity group. With the April Rebellion on the horizon, I put myself forward as a person that could be arrested

I was arrested on April 18th sitting under the pink boat in Oxford Circus to the chants of ‘we love you’ from my fellow rebels, a lot of whom would be arrested in the following days.

The growing media coverage and public awareness of the situation we are facing has been encouraging but we have a long way to go. XR will continue to promote NVDA and I will be with them. 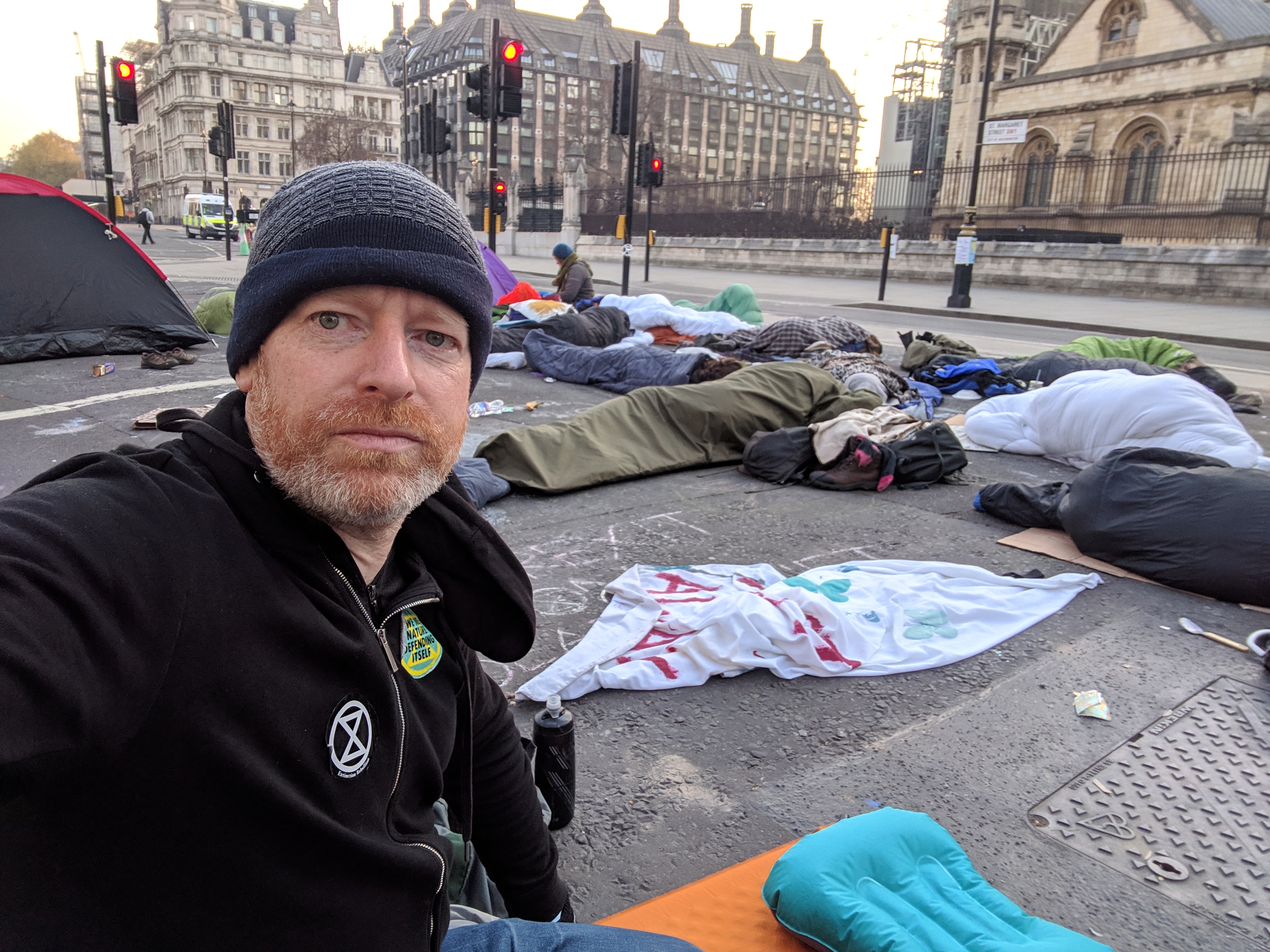 I’m 45, live in Oxford, and run a web business with 4 employees.

Attending the April protests in London was the first time I’d campaigned on environmental issues, although I’d gradually become more and more aware of the environmental problems unfolding, and wondered what I could do personally to have any impact.

In XR I’ve found a movement that I believe can make that difference, and force the change that we all need to embrace before it’s too late.

I’d never been arrested or charged with anything before in my life, but I feel strongly enough about this now. I was arrested twice - in Parliament Square, and on Waterloo Bridge, and have been charged with a public order offence. I pled not guilty and my trial has just been adjourned until October 1st.

I don’t mind paying my own legal fees, as this is a decision I took, but if people want to help then that’s amazing and very appreciated.