Mark Tipper, Hyde Park Justice Campaign
Case Owner
My name is Mark Tipper. My brother, Trooper Simon Tipper, was murdered by the IRA. He was just 19. I am raising money to help bring confessed terrorists to justice.
20
days to go
£3,880
pledged of £10,000 stretch target from 165 pledges
Pledge now

Mark Tipper, Hyde Park Justice Campaign
Case Owner
My name is Mark Tipper. My brother, Trooper Simon Tipper, was murdered by the IRA. He was just 19. I am raising money to help bring confessed terrorists to justice.
Pledge now

Patrick Ryan is a retired Catholic priest who both unashamedly admitted during a BBC Spotlight interview to smuggling weapons, bomb timing devices and explosives from Libya and helped deliver them to…

My name is Mark Tipper and I represent the Hyde Park Justice Campaign. My brother, Trooper Simon Tipper, was murdered by terrorists, along with three other British soldiers, when the IRA detonated a massive car bomb during the Changing of the Guard procession to Buckingham Palace. Dozens of others, both soldiers and civilians, were also injured and maimed by the explosion.

I need your help to bring to confessed terrorists to justice when the British Government has failed to do so. Please contribute now and share this page with your friends and family.

The confession of Patrick Ryan

This week, the BBC aired a documentary called Spotlight on the Troubles: A Secret History. During this documentary, Patrick Ryan, a Catholic Priest living in Ireland, confessed to his role in the Hyde Park bomb and other terrorist atrocities.

Asked if he was involved in IRA incidents, including the Hyde Park and Brighton Bombs, Ryan replied: “I would say most of them. One way or another, yes, I had a hand in most of them…Absolutely 100%.”

Reports are that the British Government has known for decades of Ryan’s confessed crimes. Margaret Thatcher once described him as having an “expert knowledge of bombing.”

What is the UK doing to ensure he is extradited from Ireland to be prosecuted for his confessed crimes?

Why we need your help

Ryan must not be allowed to get away with murder.

We wish to instruct our legal team to make representations on our behalf to Her Majesty’s Government and the authorities, and take legal steps if necessary, to ensure that he doesn’t. The Irish government refused to extradite Ryan in the 1980s but times have changed and why has the UK failed to make another attempt since?

Ryan is not the only former IRA member who has confessed to terrorist crimes against the UK, British civilians and soldiers.

In 2017, Michael Hayes, who also lives freely in Ireland, confessed to being part of the IRA’s Active Service Unit in Birmingham that carried out the Birmingham Pub Bombings in 1974. It is also alleged he helped plan other IRA attacks in England including the Hyde Park Bomb (1982), the Regents Park Bombs (1982), in which seven bandsmen of the Royal Green Jackets were murdered while performing songs from the musical Oliver, the Harrods Bomb (1983), which killed six people, and the Brighton Bomb (1984), in which five people were killed.

In 2016, Kieran Conway, now a practising solicitor in Dublin, confessed to being involved in five or six bombings, as well as gun battles which resulted in the deaths of British soldiers. He has also been reported as having been associated with the Birmingham Pub Bombings.

They are not the only ones.

Why has the British Government failed to bring these men to justice? All the while, it has allowed British soldiers who served our country during the Northern Ireland Troubles to be hounded through the courts by the very terrorists they were protecting us from.

What we can do

With your support, our legal team can:

Like Ryan, attempts were made to extradite another suspect in the Hyde Park Bomb, John Downey, in the 1980s from Ireland, but failed.

In 2017, as a result of pressure applied by the Hyde Park Justice Campaign, with the help of our legal team, Downey was arrested in Ireland and is now facing extradition to stand trial for a terrorist double-murder. Furthermore, our legal team have also successfully brought civil proceedings against Downey and, in December this year, the trial of this case will be heard at the High Court in London.

This proves, when their government fails them, victims and survivors can take action themselves. They can bring the perpetrators to justice. Our campaign has proven that. With your help, we can do it again.

Patrick Ryan is a terrorist. Not only does has he confessed to being involved in the murders of innocent people, he has said that he wished he could he have done more. Asked if he had any regrets, Ryan said: “I regret that I wasn’t even more effective, absolutely. I would have liked to have been much more effective, but we didn’t do too badly.” He has absolutely no regard for the feelings of the victims’ families and clearly no remorse. He has lived a free life, something that he cruelly took away from those he killed.

We want to raise £5,000 to support our campaign.  Please help us to reach our target by sharing this case far and wide.

Together, we can fight for justice for the victims and survivors of terrorist atrocities, and help bring some solace to their families.  Thank you for your support.

Patrick Ryan is a retired Catholic priest who both unashamedly admitted during a BBC Spotlight interview to smuggling weapons, bomb timing devices and explosives from Libya and helped deliver them to Republican terrorists.

After a three-year campaign for his arrest, last week there was finally a step taken in the right direction.

As reported by the Daily Mail on Thursday, the police were granted a court order to be handed the footage, including any material not originally broadcast. The BBC have 21 days to hand over the material to the police.

Hopefully this is the first step on the journey that sees Ryan arrested for the crimes he has openly committed, and justice can finally be given to the families of the victims, and the public.

You can read more about this here.

Thank you for your continued supported.

As we're sure you've seen in the news, we had an enormous victory in court yesterday with the High Court ruling that John Downey was responsible for the Hyde Park bombing.

We're so grateful to everyone involved in the case and especially for your ongoing support - thank you so much!  We could not have it done without you.

We are continuing our work in the hope that we can help other families like us bring more terrorists like John Downey to justice for the lives they have taken. There are many former IRA members who have confessed to being involved in terrorist activities and yet the British government has failed to take action. We won't let this happen - we won't let these men get away with murder.

Thank you for your ongoing support.

Mark Tipper, on behalf of the Hyde Park Justice Campaign 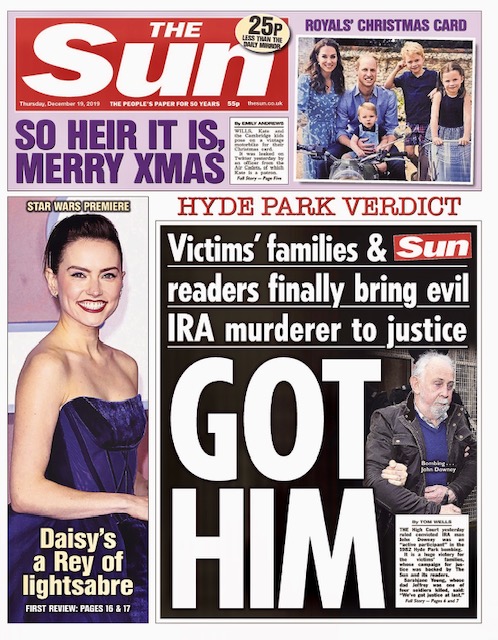