Help us democratically elect a Labour 2018 Mayoral candidate in Newham

Help us democratically elect a Labour 2018 Mayoral candidate in Newham

We've got great news - we won!

A very Happy New Year to all our supporters and we are pleased to be able to share some great news!

Today marks a significant moment in the case for democracy, fairness and political acco…

Like many members and activists in Newham we believed that the Newham Trigger Ballot, which took place between October and December 2016 to decide who should be Labour’s candidate for Newham’s Directly Elected Mayor in 2018, would be run in a fair and transparent way. However, there were many irregularities and inconsistencies with the process.

A clear majority of local Party members and Party branches voted for an open selection so that they could choose from a range of candidates but they were outnumbered by the votes of Labour Party affiliate organisations.  We believe the process was flawed and the spirit and integrity of national Labour Party rules was undermined. We want a fair and open selection process to select a candidate who will unite the local Labour parties in Newham and bring about victory for Labour in May 2018.

We also want to stop this happening elsewhere in the Labour Party - especially at a time when Directly Elected Mayors have been established in places such as Manchester, Birmingham and Liverpool. This will restore faith in the party’s procedures which should be democratic, transparent and fair.

The Newham Trigger Ballot Legal Campaign was launched in January 2017 after the Labour Party's ruling body refused to launch an investigation into the 2016 Newham Trigger Ballot. Despite a majority of Newham Labour Party members who took part in the ballot voting for a democratic and open selection to choose from a diverse range of candidates for elected Mayor, their votes have been overruled.

The legal action has been launched because local Labour Party members want to expose the way in which the selection process to 're-affirm' Sir Robin Wales was marred with irregularities, lack of information, transparency and all-round confusion.

Undemocratic practices were used to swing the Trigger Ballot in Sir Robin's favour, who has been in post since 2002. In some cases, affiliated organisations who had no entitlement to vote did so. While some were encouraged to cast several votes and others to vote only once. There was shock amongst the membership, but despite appeals, petitions, lobbying and campaigning, the Labour Party ignored the issues and even the Labour Party Rule Book.

So as two members from East Ham and West Ham CLPs (party members for more than 45 years) with a large support base, we have decided to challenge the process for the sake of democratic accountability in the Labour Party, fairness and transparency (read the background and more details here and here). We are all members and supporters of the Labour Party and are only interested in pursuing this legal claim out of concern for the proper democratic functioning and integrity of the Party.

Please help and support us.

As the largest democratic socialist political party in Europe, it's vital that the Labour Party advances the process of democratic renewal and accountability in our country so that voters have confidence in the values of Labour politics. This must start within our Party. Already the party has announced its Party Democracy Review to look at how best to increase diversity of political representation, strengthening the involvement of its members, make politics more transparent and accessible, improve local and regional structures, harness the power of social media and make the Labour Party more engaging. But it is now ignoring existing glaring democratic failings.

There are five main grounds of the legal challenge to the 2016 Labour Party Trigger Ballot process in Newham:

There are 5 main grounds of challenge:

1. The rules were inconsistently applied in respect of which Affiliated Organisations (AOs) could take part.

2. The rules were inconsistently explained, in that those running the Trigger Ballot (TB) failed to ensure AOs were properly informed of their voting rights and that the TB was fairly run.

3. The NEC failed to carry out a proper investigation, despite prima facie evidence of impropriety (as set out in a long letter sent to the NEC on 17 January 2017).

4. The NEC wrongly endorsed Sir Robin Wales, when there was compelling evidence that the process was flawed.

5. The rules for the 2016 Trigger Ballot in Newham were wrongly applied because some AOs were encouraged to vote more than once.

There's been extensive correspondence between our lawyers, ITN Solicitors, and the Labour Party.

We need to raise money and by donating to this legal campaign you will be supporting the following stages of our legal action:

3. Issue  of Statement of Claim / Pleadings

PLEASE SUPPORT THE CAMPAIGN AND PASS THIS INFORMATION ON THROUGH ALL YOUR NETWORKS.

We've got great news - we won!

A very Happy New Year to all our supporters and we are pleased to be able to share some great news!

Today marks a significant moment in the case for democracy, fairness and political accountability in the Labour Party; and our deep thanks for your unstinting commitment to our campaign over the past year and especially over recent months.

We are thrilled to announce that we have achieved a great victory for our campaign to democratically elect the Labour Party Mayoral candidate for May 2018.

Since our last message to you on the 18th November 2017, when we reached our initial target of £10,000, we’ve been in a period of detailed preparations and discussions with our legal team; who in turn have been liaising with the defendant’s lawyers.

We had prepared all the legal papers for our case which your donations contributed to, including ‘Particulars of Claim’ and witness statements which we were intending to submit to the High Court on Friday 22nd December 2017.

However, prior to that deadline, a series of developments were triggered when we received a letter from the Labour Party’s lawyer on Thursday 21st December 2017 offering to settle our case. After negotiations by our lawyer, Ravi Naik from ITN Solicitors, a settlement was agreed on Friday 22nd December 2017 which we are able to announce today.

1. The Trigger Ballot will be re-run. A formal announcement to eligible members and affiliate organisations will be made by the Labour Party shortly, followed by publication of a timetable;

2. The Freeze Date of the new Trigger Ballot will be 25th October 2016 (i.e. the same freeze date that applied when the original Trigger Ballot process was run);

3. The new Trigger Ballot process will be overseen by the London Regional Labour Party, and not the ‘Newham Labour Party’s’ Local Campaign Forum based on a list of affiliated organisations agreed by both parties.

The re-run of the 2016 Trigger Ballot is without prejudice to our right to continue to lobby the NEC to move straight to an open selection, so that Labour Party members in Newham can immediately choose from a range of candidates.

Note that the current Mayor of Newham, Robin Wales, has not been involved in any of the negotiations between the parties, so any public comments he has made to the media or party members locally are without substance.

From the outset, we said that we did not want to take the Labour Party to court or have party funds spent defending our claim. However, because we were ignored by the Labour Party at that time, we had little choice but to mount this legal campaign. Any democratic selection or election process in the Labour Party must be run properly, openly and fairly – and in line with its rules.

We are therefore delighted that the Labour Party has agreed to settle. This means that going to court is no longer necessary. This is a real win for both parties.

We intend to keep you updated with developments over the coming weeks, including our planned campaign encouraging members to vote for an open selection at their Trigger Ballot meetings, so please sign up to our regular mailings by sending us an email to legalmail2018@gmail.com, so you can be added to our database.

Finally, our deepest thanks once again for all your support over recent months and we'll be in touch soon with further updates including details about our campaign for an Open Selection. 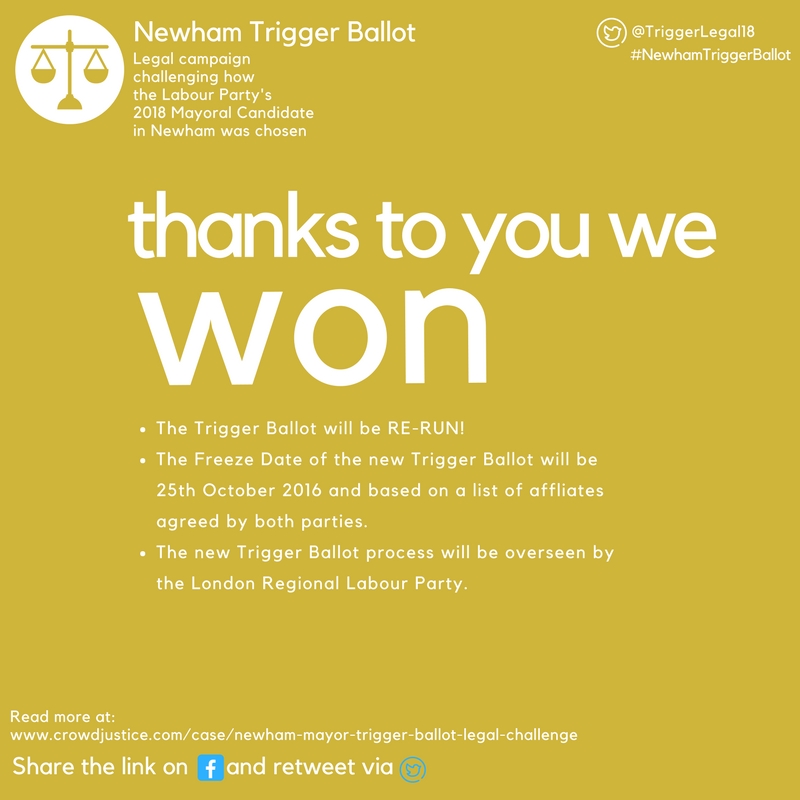 Thank you! We reached our first stage target and this is what happens next.

Firstly,  a BIG thank you to all our supporters! We have been blown away by the amounts pledged so far, alongside the massive support our legal challenge campaign has received from you and others interested in political accountability and democracy in the Labour Party in Newham.

Thanks to your support we have now reached our first stage fundraising target of £10,000 (and over!), so wanted to provide you with some details of what that will cover and what will happen next:

We will of course keep all our supporters updated over the course of the coming week, and our deepest thanks once again for supporting us in this important case.

Democracy, fairness and political accountability in the Labour Party has to be honoured, and your support with this case is helping us achieve that for every single Labour Party member in Newham and beyond.