HELP US HOLD THE POLICE ACCOUNTABLE FOR ABUSING DISPERSAL POWERS

HELP US HOLD THE POLICE ACCOUNTABLE FOR ABUSING DISPERSAL POWERS

We are 44 Middlesbrough Football Club supporters who were unfairly detained for over six hours and given dispersal notices by Derbyshire Police.

Our crime? We don’t know and the police don’t have to tell us anything.

Football fans are being treated like criminals for just trying to support their team, so we’re taking Derbyshire Police to court to get justice for their misuse of dispersal powers. Please donate what you can to our legal fund and share this page on social media to spread awareness. Help us hold the police accountable.

On 17th March 2015, officers from various police forces were involved in issuing a group of approximately 50 football supporters with dispersal notices pursuant to Section 34 and Section 35 Anti-Social Behaviour, Crime and Policing Act 2014 (“the 2014 Act”).

The fans had travelled from Middlesbrough to an away game and were detained on arrival for over six hours. During this time they were not able to use a toilet or have anything to drink. Some of the fans were told by police officers to urinate in the street next to a church. This was extremely humiliating and degrading for those concerned.

The fans were eventually led through the streets of Derby to the train station. Police officers travelled with the fans on a train to Nottingham to detain them further until their transport arrived. Their transport was surrounded by marked police vehicles with their lights flashing and sirens on and they followed them down the M1 for some time.

Why? No one knows. The fans were given no explanation and the police are hiding behind ‘Public Interest Immunity’.

The police do not have to justify their actions and so can and will continue to abuse dispersal powers in this manner. Someone needs to stand up to them.

Dispersal powers should ONLY be used to disperse INDIVIDUALS for a period of time which may be necessary for the purpose of removing or reducing the likelihood of either (a) members of the public in the locality being harassed, alarmed, or distressed; or (b) the occurrence in the locality of crime or disorder. When deciding to make such an authorisation police officers must have particular regard to the rights and freedoms of expression and assembly in articles 10 and 11 of the European Convention of Human Rights In many cases there are no individual assessments and the police are able to cherry pick groups of fans and disperse them without having to offer an explanation.

Many of the fans had taken time off work, bought tickets and were simply looking forward to watching a football match. Instead, they were deprived of their liberty, humiliated and escorted out of the city like criminals. One of the fans described it as the most humiliating experience in his forty years of supporting football. 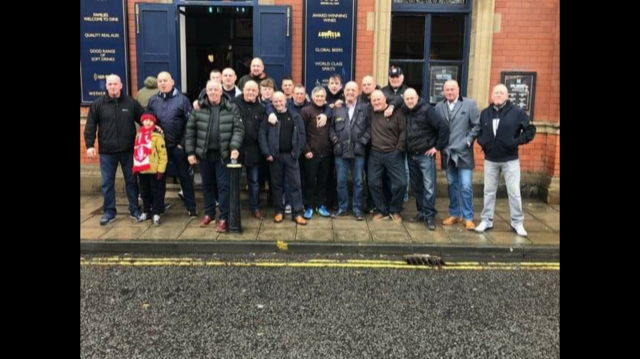 “We are a group of Middlesbrough fans simply trying to support our team, so we are asking for football fans across the UK to get behind us so we can fight the police. We have issued a claim for false imprisonment and breach of our Human Rights under Article 5, 8 and 10 of the European Convention of Human Rights. However, the police can afford to fight this case as their legal fees are funded by you, the tax payer – they know that we can’t afford the legal fees and that this may force us to drop the case.”

Our legal team is working on a No Win No Fee basis but going up against the police means if we lose we could be forced to pay their costs. The introduction of the Legal Aid, Sentencing and Punishment of Offenders Act in 2013 means that if we lose our case we could be looking at paying a hefty legal bill. The police know this is our situation and are depending upon us dropping the case. Please help us over come this barrier to justice. We, the people, can come together to crowdfund so we can see our day in court and force the police to be accountable for their misuse of dispersal powers.

Ten Bristol City fans recently brought a similar case against West Midlands Police and they also had to rely on generous donations from football fans to cover the potential legal fees.  It was a long and difficult legal battle which eventually settled out of court. Bristol City Supporters Club & Trust Chairman, Stu Rogers, said: "Whilst we will not have our day in court to seek a ruling, we believe this is a moral victory and sends a clear message to police forces up and down the country. Do not misuse these dispersal powers. Fans simply will not stand for it." As our case is being taken to court, we hope to succeed in achieving a ruling in favour of football fans, so the police are no longer able to misuse dispersal powers.

On behalf of the fans bringing this case, thank you so much for your support. If every football fan from across the country could each donate a few pounds, we will soon reach our target.

Please note if we win this case all funds raised will be donated to other justified causes, this has nothing to do with money, it is about justice for Middlesbrough fans and football fans across the UK.