The Saxonvale site is owned by Mendip District Council, who have agreed to sell the land to Acorn to develop a high density residential development in the town centre of Frome. This plan is driven by maximising profits that will leave Frome rather than delivering much needed economic and social priorities. It breaches the councils’ own policy for employment land in Frome, in the only town centre site left that could deliver it and falls well below the 30% affordable housing target. Frome is facing a plan causing significant planning harm, and if it succeeds, the only opportunity left for a genuine and sustainable expansion of the town centre will have been lost - permanently.

Despite the Acorn scheme being overwhelmingly rejected by Frome, and there now being an alternative plan from Mayday Saxonvale that has the support of the community, Mendip District Council continues to attempt to undemocratically impose the Acorn scheme on Frome.

There is now an alternative community-led plan from Mayday Saxonvale, which delivers an inspiring mixed use development for Saxonvale. The plan meets or exceeds employment space and affordable planning targets set for this important site. It retains heritage buildings and structures. Thus far, it has attracted over 800 supportive comments from residents as well as the Frome Chamber of Commerce and the Civic Society. The outline planning application will be determined early in 2022.

We are raising funds to help meet legal costs, including a judicial review to challenge Mendip’s Planning Board decision to impose the Acorn scheme upon Frome.

This site could not be more significant for future of Frome. It is the last remaining employment & commercial base including heritage assets and buildings that Acorn's application seeks to demolish

Here are two messages from the many, many supportive comments we have received. 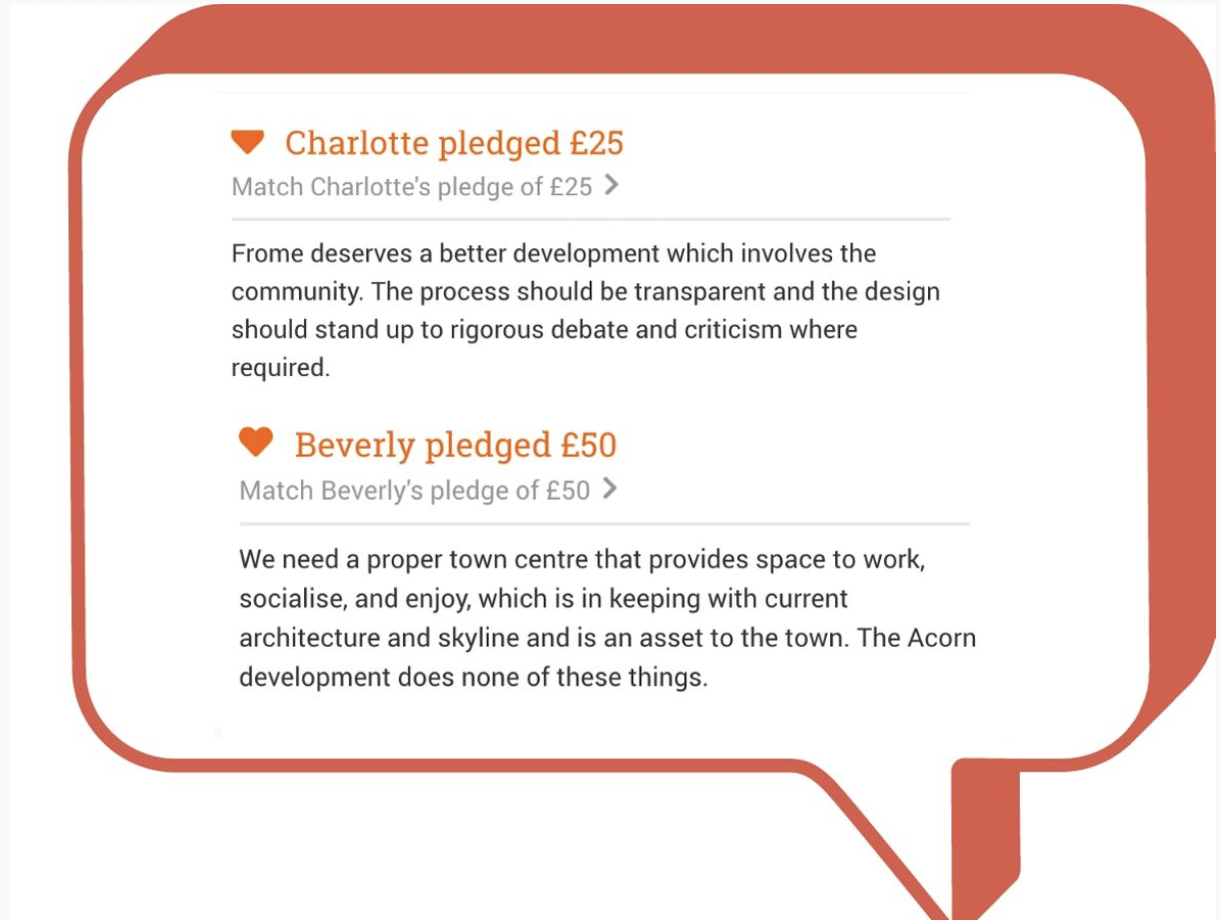 Mayday Saxonvale Director Damon Moore has now submitted this challenge to quash Acorn's flawed application. We are challenging the recommendation they received in the second Planning Board meeting held on 15th September 2021. A further pre-action protocol letter, (or PAP) was issued last week and Mendip now needs to decide whether to defend this challenge or send the Acorn scheme back to the Planning Board for a third time.

This is an expensive process and so any and all contributions are gratefully received!

We will issue further updates as we proceed and in what is a critical moment in the future of sustainable community-led development and the protection of Frome’s town centre.

The previous JR was centred on the protection of heritage buildings in Saxonvale, which the council acting for Acorn had applied to demolish.

This Judicial Review served its purpose by stopping the demolition of these heritage buildings, which feature in the Mayday Plan, during the critical period of our planning application coming to committee.

However, by authorising the signing of the S106, the strength of our case diminished and we took the decision to withdraw from this challenge and focus on the legality of the Acorn consent.

These proposed demolitions would continue to be blocked by our second JR challenge (as above) against Acorn’s outline planning permission, if successful.

The pre-decision Judicial Review became live in the run up to Christmas, (21st December). Meanwhile Mayday's alternative plan for Saxonvale has received over 840 favourable comments to date and formal recommendation by Frome Town Council, Chamber of Commerce and the Civic Society. Instead of acknowledging Frome's right to a democratic, social value & community-led plan, Mendip District Council recommended the Acorn plan again when it was forced back to committee by our lawyers last year on 15th September, with serious voting irregularities recorded during the meeting. Acorn's profit-led scheme does not have a full consent yet it seems the Mayday plan will be delayed from the statutory limit of three months by Mendip's Planning Department. This has been a long, anxious and taxing campaign for everyone involved but we have a great team, wonderful support and believe that if Frome speaks out long enough and loudly enough then Mayday will prevail. We have to start making development in the UK work for everyone because we are all shareholders in our communities. 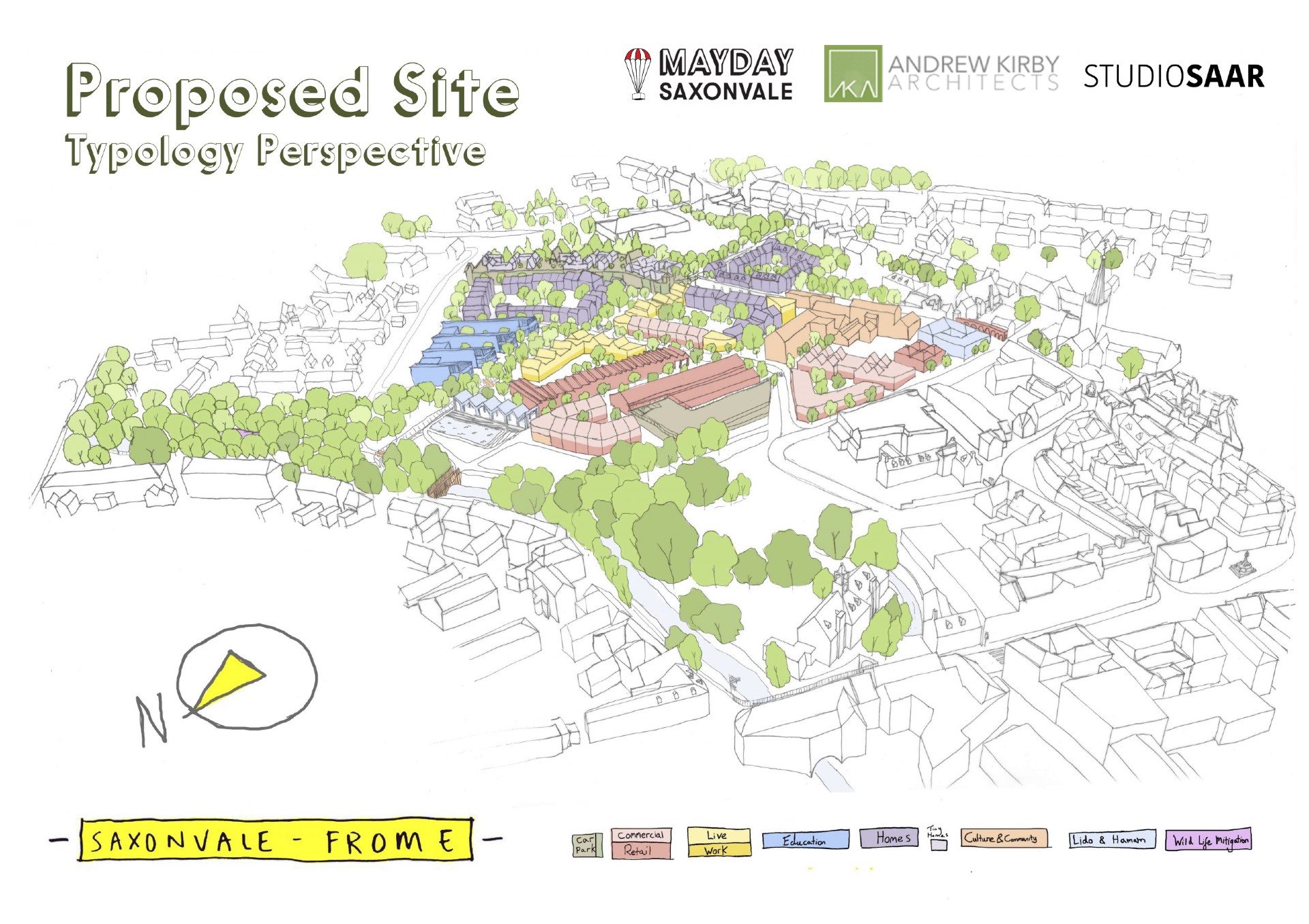 We are inviting you and the community of Frome to discuss our alternative plan for Saxonvale:

Meet the architects at our Public Consultation 14th & 15th May at the Silk Mill in Frome:

Your feedback will help shape Mayday Saxonvale's Final Masterplan, which is scheduled for submission for outline planning approval in June 2021.

Don't miss out on this opportunity to have your say on the development of Saxonvale, which will define the future of our town forever.

Acorn’s controversial Saxonvale application is due to be considered by Planning Board this Thursday at 6pm.

The Mayday Saxonvale Campaign is responding to this creatively barren scheme which - once again - is premature. If the planning committee vote to approve, Frome faces the imposition of a plan over-riding the objections of our statutory consultees; Frome Town Council, Frome Civic Society and Frome Chamber of Commerce. Fundamental problems expressed by members of the public have not been addressed, yet we see this plan already recommended by the Planning Officer.

Why? What is a planning consent worth if it has not respected local democratic procedures? With not a single letter of support, more than 230 members of the public have written eloquent objections, so Mayday asks, by what right has this recommendation been given? Quoting from these contributions: - “Please listen to the residents of Frome and do not pass this proposal’” and “We need to see more ambition for our town, from our District Council and indeed would like to see you honour your own plans for the redevelopment of this site”.

If Acorn have failed to do their job, they should be asked to submit their proposal again. The development of Saxonvale should not be politically imposed like HS2, but done with the consent and approval of Frome’s legitimate representatives.  Public trust is not a luxury - it is vital for the delivery of public policy. Mayday asks all of our District Councillors to think very seriously before taking this step.

This week, Mayday Saxonvale’s alternative plan begins its journey to live application status. In comparison with the Acorn proposal, our model will provide twice the amount of affordable housing, a substantial amount of live-work accommodation supporting people to set up their own businesses in an expanded, mixed commercial zone. It features sensitive and imaginative design throughout, demonstrating a proper duty of care and introducing green infrastructure solutions. An essential new site for St John’s School will be added alongside greatly increased community space.

Despite all of the political arm-twisting, Frome can have the Saxonvale development our town has asked for, waited so long for and worked so hard to achieve. Frome doesn’t need Acorn - we can do this ourselves and we are not going to be held back.

Open Bundles were submitted last week in our case for the full disclosure of Mendip District Council’s contract with Acorn, (bundles are when all the case papers are collected, over 160 pages altogether!). There is a 14 day period in which additional documentation can be added after which the case will be heard. Because the First-Tier Tribunal is a court of law, evidence is much more central than with the Information Commissioner’s Office who found for the District Council in our appeal earlier this year, (March). As well as evidence relating to a breach of procurement regulations in Acorn’s appointment, a case is growing for mis-use of public funds spent on the Saxonvale project. Such cases have a £2m threshold and on current figures, it appears that the District Council have easily passed this threshold. Nonetheless cases like these are difficult to win. If we do not succeed with the First-Tier Tribunal appeal, we will continue to the Middle Tier believing local democracy cannot be suppressed indefinitely. New evidence, (such as the mis-use of public funds) is appearing all the time and we are delighted that much more willingness is being shown by our local press to carry the story, (if you want to read more please look at our Press Pages). Hopefully, more investigative journalism will lead to Frome's District Councillors deciding enough is enough!

Our District Councillors Need to Start Speaking Out

Our case for full transparency of the developer's agreement between Mendip District Council and Acorn is moving towards a decision later this month by the First-Tier Tribunal. We have uncovered new evidence thanks to our solicitors Pre-Action Protocol submission and the CrowdJustice campaign so there is a good chance of successfully disclosing the contract and seeing for the first time, exactly what financial arrangements have been agreed. Our MP is helping but there are still many gaps in the evidence file and a lot we don't know. Our local democratic system has been completely impounded in Frome because of Acorn's application and the public and Town Councillors misled. It is time for all 11 of our elected District Councillors to start speaking out.

In our case for full disclosure of the developer's contract, the General Regulatory Chamber First-tier Tribunal have accepted evidence that Acorn's contract with Mendip District Council was unlawful. We now call upon the District Council to annul this contract and put the site out to tender in accordance with proper procurement procedure. Meanwhile Acorn, supported by the District Council are pushing ahead with their application in breach of Frome's local development plan for Saxonvale with no commitment that the Core Target for affordable housing will be met. Our appeal will be heard by the GRC at the end of August.

Since we began our legal action, the District Council have barred any direct contact with the Silk Mill, yet another demonstration of the lack of democratic accountability and transparency over Acorn's scheme for Saxonvale. The Acorn contract has been confirmed by our solicitors to be a Public Works Contract and not the straightforward sale agreement that the District Council have always claimed. Meanwhile, the Council have re-written this document as a Deed of Variation to help avoid Mayday's procurement challenge. Full disclosure of the contract for our legal team is ongoing and currently being appealed to the First-Tier Tribunal. It could go all the way to the High Court.

There are clear indications that Mendip District Council and Acorn's plan is to impose this very unpopular and unsympathetic scheme onto our wonderfully creative and special town.  We would like to assure all of our campaign supporters that during the Covid-19 lockdown we have been working on a new initiative to be announced shortly.