Holding Government to account for cladding and building safety crisis

Holding Government to account for cladding and building safety crisis

What do we want?

The cladding and building safety crisis has impacted hundreds of thousands of leaseholders throughout the United Kingdom. A lack of government action, deregulation, privatisation and poor practice has allowed thousands of unsafe and highly dangerous blocks of residential flats to be built and sold to people across the country.

Manchester Cladiators have instructed Irwin Mitchell LLP to obtain advice from specialist leading counsel about the legal options available to leaseholders. The leading counsel, QC, and barristers we are instructing are experts in public, property and human rights law.

On 14 June 2017, Grenfell Tower in London tragically caught on fire and 72 people lost their lives. The cause of the rapid and extensive fire spread was the highly flammable Aluminum Composite Material and insulation used in the Tower’s cladding system.

In the aftermath of the fire it was revealed that thousands of buildings had been clad in combustible materials. Since this time, further fire safety issues have arisen around other fire-safety building requirements, such as the lack of fire barriers.

These highly dangerous features pose an immediate risk to the safety and lives of residents of flats around the country and yet it is highly arguable that the designs were largely compatible with government building regulations as they stood at the time. This followed decades of government deregulation and privatisation in the regulation of building control.

The Government has repeatedly stated that the cost of making these buildings safe should not fall onto the shoulders of leaseholders and in February 2021, the UK government increased grant funding to over £5 billion towards the costs of remediation works.

However, due to problems and limitations with the scope of the Government’s scheme, some leaseholders will likely be forced to enter a loan scheme arrangement and some have no help at all. The costs of the required and important safety works are still being shouldered in the majority by the leaseholders, who bought their homes in good faith and after following the usual conveyancing process, without knowledge of these issues.

The costs of these works are having a huge impact on the mental health and financial security of these leaseholders. Their homes have become effectively worthless overnight and many of them do not have the money to pay for the work essential to make their homes safe.  Many homeowners face bankruptcy. The Government’s approach is badly failing many innocent leaseholders.

We believe there is a potential challenge to the Government’s decision not to put in place a proper scheme to pay for the works required on the flats of leaseholders affected by this issue.

However, due to the significant complexities of this legal case, initial funds are required to instruct expert barristers to complete a large piece of work investigating and advising on this matter. Once their advice is received the leaseholders will better understand the strength of the legal arguments to proceed with a legal challenge.

If a legal case can be successfully brought it could benefit hundreds of thousands of leaseholders across the country who are currently facing crippling bills to comply with building works required by government regulations.

Help us to raise

Our initial target is to raise £14,000. If we can get close to that amount we may introduce a stretch target that will take us closer to the amount we would need to embark on a legal challenge.

Whilst we are making a heartfelt plea for your support, we acknowledge that this does not always have to come in a financial manner. But, we would ask that if this resonates with you in any way and you agree that justice is not currently being served that you at least help us by sharing this page far and wide on social media and via WhatsApp or mail.

Below are case studies from Georgie, Darren and Beth – three individuals impacted by this issue:

Georgie Hulme: “My Mum died in comfort, thinking that she’d given me home security for life, by leaving me her accessible flat. This was especially important to her, due to my complex disabilities. It breaks my heart this isn’t the case because of the fire safety issues.

In December 2019 I was first informed by letter, that there were major fire safety issues in the building where I live. This includes timber cladding, timber on balconies and various internal works (the full list we don’t know as yet).

The part of the building I live in is under 18 metres, so the application to the Building Safety Fund was rejected due to the height being too low. So there is no help towards cladding remediation. There is no help for non-cladding costs, that could cost even more.

The Government propose a loan capped at £50 a week for the cladding remediation only. I’m reliant on disability benefits and yet I’m expected to be able to pay this, be in debt potentially for life, as well as pay for all the general rising costs e.g. insurance and other remediation works. I simply can’t. This crisis isn’t my fault and yet I and others are being unfairly punished.

There is no break from this nightmare. I’m constantly full of dread and anxiety. I’m experiencing new symptoms that my medical team advise are due to high stress. These include panic attacks and unresponsive episodes. The worst occasion I was hospitalised due to the episode lasting twelve hours.

I worry about the safety of myself and others. I fear a huge bill landing any day. I’ve tried to get answers from my management agent and other services, with support from my MP. I’ve been as involved as possible in campaigning, including TV interviews, attending protests and co- founding CLADDAG (a Disability Leaseholder Action Group). It all takes its toll.

I can’t see a future, only bankruptcy, further health deterioration and losing the home that I love due to the government’s failure to put in place a fair scheme to help leaseholders fund the fire safety works required.” 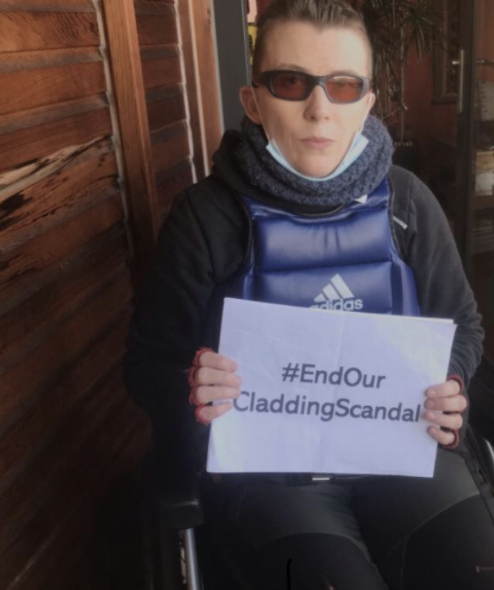 In October 2020 our freeholder imposed a Waking Watch and measure to make the property comply with new fire safety measures for which each leaseholder had to pay £4,500 in February 2021.

Since then, we have been informed that further remedial work will cost £97,0000 per apartment and that we will be expected to pay this bill.

In response a core group of Leaseholders have mounted a print and television media campaign to raise the profile of the Fire Safety bill and mistreatment by our Freeholder and this has been successful. We have participated in numerous rally’s and Parliamentary meetings and have amazing support from local politicians and The Manchester Cladiators Group.

That said, the burden of a massive bill weighs heavily and has impacted on my life enormously.  The situation is on my mind when I wake up, throughout my working day; during my social time with family and friends and when I go to bed… there is no respite.  I now have high blood pressure and an extremely fragmented sleeping pattern to the extent that I am now prescribed medication but that does not alleviate the problem; it merely masks it.

My block is unlikely to qualify for funding from current central government and any loan scheme criteria is uncertain.  If I were to borrow and repay at £50 per month it would still be interest bearing and take me 161 years to repay!

Financially my life has been thrown upside down.  I have been billed for a sum far exceeding what I paid for the flat. In reality it will wipe out savings and lump sums from pensions and still leave a deficit.  Any hopes of a reasonable retirement have now faded and I am faced with an uncertain future that I have no control over.

The injustice of this situation is wearing me down.  The Government need to put right their wrongs and pay instead of pursuing the only innocent party – Leaseholders.” 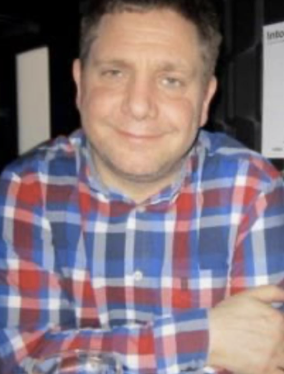 Beth:  “I am a leaseholder in Salford Quays. I'm an NHS frontline worker. I earn an average British salary. All my savings have been used towards purchasing this flat. I am not sure what to do when the bills arrive. It could potentially lead to bankruptcy.

Currently I am awaiting the appointment of a firm to do full costings for remediation work. We should have this done within the next four months so the bills will start to arrive next year.

I know our building will fail on fire safety checks as it has fire break deficits. This would require total removal of cladding to complete the fire safety works.

The management company has applied to the building safety fund and been rejected twice because we were told that we don't qualify for support.

My service charge has increased to over £700 per quarter.

I've spoken to our local MP and attended protests, done media interviews and linked in with others in similar situations but it's mentally draining. I am hoping a legal case against the Government can help me and many others in a similar situation.”