Kentucky Medical Marijuana Lawsuit
Case Owner
Three plaintiffs have filed a lawsuit against the state of Kentucky for the legalization of medical marijuana.
Closed
on 21st July 2017
$160
pledged of $1,000 target from 6 pledges

Kentucky Medical Marijuana Lawsuit
Case Owner
Three plaintiffs have filed a lawsuit against the state of Kentucky for the legalization of medical marijuana.
Share on Facebook

Danny Belcher is one of the few veterans willing to publicly advocate for medicinal marijuana in Kentucky – while tens of thousands of Kentucky veterans suffer from PTSD, few speak publicly about marijuana usage for fear of losing their benefits and possible criminal punishment. Danny suffers from frequent episodes of panic and intense stress directly related to experiences he had in service to our country.

Danny's chronic issues have made parts of his life exceedingly difficult for decades after his tours of duty. He has tried countless medical and therapeutic solutions to improve his condition – marijuana is the one that works. Knowing that there are many others in similar circumstances, Danny has chosen not to remain quiet on this issue but to risk the consequences of admitting to a criminal act in an effort to change the law and improve lives in Kentucky. Watch Danny’s testimony before the interim joint committee hearing of the Kentucky state legislature here:

Plaintiff Amy Stalker endured side effects such as seizures while trying to treat her bipolar disorder and irritable bowel syndrome, which is now being managed by her use of cannabis, according to the lawsuit.

She legally used medical marijuana while living in two other states but had to come back to Kentucky because of a family illness and here "she is treated as a criminal," Canon said.

Ms. Stalker is not able to openly discuss her use of cannabis with her doctor and cannot follow course of treatment recommended by her doctors in other state due to Kentucky state laws.

"She comes back to her home state and she's treated as a criminal for this same conduct," said plaintiffs' attorney Daniel Canon. "That's absurd, it's irrational and it's unconstitutional."

Ms. Stalker, meeting with reporters, said: "I just want to be able to talk to my doctors the same way I'm able to talk to doctors in other states, and have my medical needs heard." 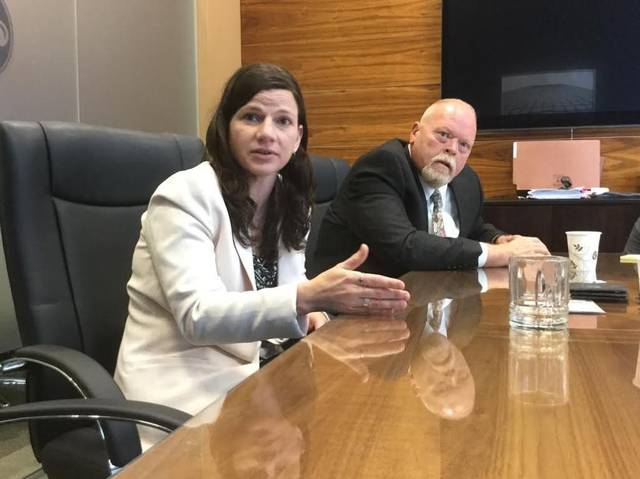 Dan Seum turned to marijuana after being prescribed opioid painkillers to manage back pain.    "I don't want to go through what I went through coming off that Oxycontin and I can't function on it," he said. "If I consume cannabis, I can at least function and have a little quality of life."

Seum became addicted to narcotics after taking OxyContin for chronic back pain, the suit said. He began using medical marijuana to deal with OxyContin withdrawal and to manage pain.
"I live in pain daily," Seum told reporters. "Cannabis helps me deal with it."Once he started using cannabis, no pain management doctors would treat him".

"Mr. Seum is left with an impossible choice: Should he stop using cannabis and experience excruciating pain in order to explore the chance that another pain management option might be more effective?" the suit said. "Or should he continue using cannabis, preventing him from receiving medical care from Kentucky doctors for the rest of his life?"

The issue we are addressing is very simple – by arbitrarily singling out medicinal marijuana as illegal, Kentucky is refusing to let doctors prescribe what is best for the patient. A group of plaintiffs heavily impacted by this issue are fighting to ensure this wrong is made right. This week we have filed a lawsuit against the State of Kentucky on behalf of the people of our state who should be able to access the medicine they need in order to live healthier lives.

The fact that deserving patients are denied access to this medication is inhumane. Marijuana has been regularly prescribed across the country for many years to treat ailments including multiple sclerosis, Parkinson’s disease, glaucoma, symptoms caused by chemotherapy, migraine headaches, post-traumatic stress disorder, bi-polar disorder, and many other conditions. Despite the fact that the majority of Kentucky voters believe marijuana should be legalized for medicinal purposes, Kentuckians cannot legally use marijuana regardless of their state of health, the opinion of their doctor or their having previously used it for medical purposes when living outside of the state. Marijuana has been shown to be highly effective and safe, and like prescription drugs it should be made legal so doctors can prescribe it in those circumstances.

The fight to legalize medicinal marijuana in Kentucky is not going to be easy. We need to continue building our community of support even as we work on gathering funds to support this first stage of our litigation. To those who donate, we plan to be very communicative about the milestones we hit along the way.

On behalf of the countless Kentuckians desperate for the ability to seek proper medical relief for chronic ailments, thank you for helping us legalize medicinal marijuana in Kentucky!