#BLACKLIVESMATTER IN THE UK TOO

There are devastating parallels in the deaths of George Floyd and my brother Sheku. The two men were both loving partners, fathers, sons and brothers.

George Floyd, died after a white American police officer, pushed his knee into his neck for almost nine minutes while he was handcuffed and lying face down. My brother died in Scotland in 2015 after he was held face down by up to nine police officers after subjecting him to CS spray, pepper spray, batons, handcuffs  and leg restraints.

Sheku lost consciousness within a few minutes and died. His body was covered from top to bottom in bruises and lacerations, he had a fractured rib with petechial hemorrhages in his eyes- a sign of asphyxiation.

But the parallels between George and Sheku end there. Four police officers have been charged in connection with the murder of George Floyd. Yet in 5 years not one officer has been disciplined, let alone charged nor will any ever face trial for Sheku’s death.

My brother came to Scotland when he was 17 to live with me because we thought it would be safer for a young black man to grow up in the small town of Kirkcaldy rather than London. How wrong we were. He died on a Scottish street, 31 years-old, leaving behind his two young sons.

On the 3rd May 2015 around 7.15am police responded to reports of a black man acting erratically, walking down the street and holding a knife. Six police vehicles were dispatched, yet when the Police arrived Sheku was carrying neither a knife nor or any weapon.

The first four officers that arrived used CS spray, pava spray and batons on him, Sheku was brought to the ground in less than 45 seconds of the first officers arriving. He stopped breathing within in minutes never to recover.

All nine officers returned to the Police Station and sat together in a canteen for up to 8 hours whilst failing to give statements to investigators for some 32 days. In the hours that followed many lies were told including that he had attacked a police officer with a knife.

The case of George Floyd has highlighted globally the issue of racial injustice and killings at the hands of the police, but Black Lives Matter also in the UK. Since 1969, in the UK there has not been a single successful prosecution of a police officer for homicide.

A Public Inquiry has been announced which will look at the circumstances leading up to the death of Sheku, as well as the post-incident management and the investigation into his death. It will also examine whether race played a part in what happened. This Inquiry is likely to last up to two years and could conclude as late as eight years after Sheku died in police custody. 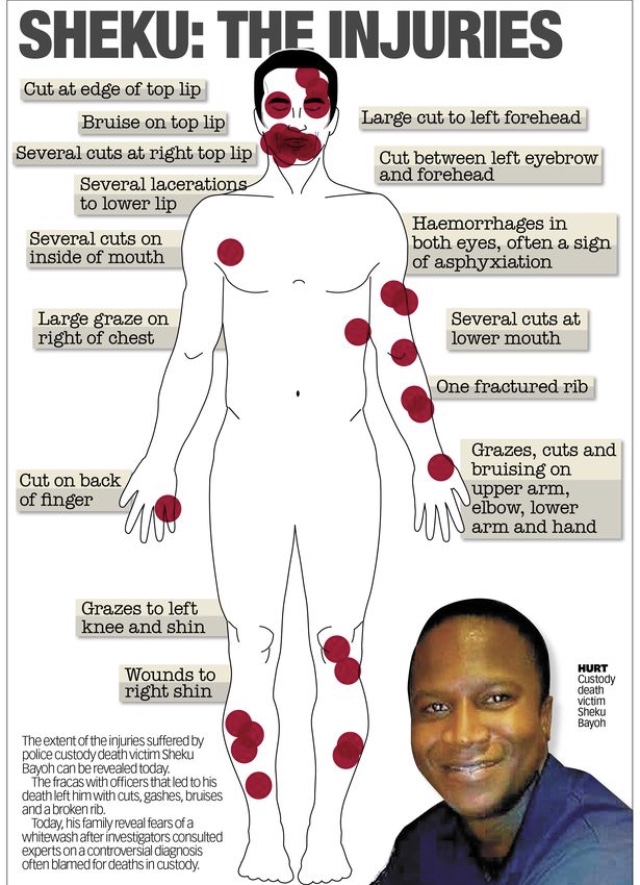 No family should be forced to set up a campaign in the midst of their grief. Families are denied access to legal aid when a death in custody takes place and we were expected to put our trust in the Crown Office which they betrayed. We need to bring about a legacy in Sheku’s name to ensure no other family should endure what we have in five years.

How much we are raising and why

We need to raise £50,000 to continue the campaign and pay accumulated costs. Initially, we are aiming to secure £10,000 in the first stage.

Please support our nationwide campaign, make a contribution if you can, share this page on social media with the hashtag #ShekuBayoh, follow us on twitter @BayohJustice  and a facebook page which will be set up very soon, and spread the word about the injustice that has devastated our family for the last five years and fight to ensure no other family is denied justice.

Statement by the lawyer Aamer Anwar on behalf of Collette Bell and Sheku’s family:-

Whilst the Inquiry will officially start on 30th November, it will adjourn  for several months to allow the family and other participants to prepare.

That the Public Inquiry came about at all is the direct result of the tenacious determination and campaigning of Sheku’s partner Collette and his family.

The family want to thanks those who have supported the family and hope you will share these details as they require whatever support you can still give.

The family have suffered considerable anguish, anger and frustration about the lack of accountability after Sheku’s death and the failure of the Crown to hold the police to account.

In the UK there has never been a successful manslaughter prosecution of any officer either at an individual or senior management level for police-related deaths, despite evidence of unlawful or excessive use of force or gross neglect.

The review by Dame Angiolini QC on the 11th November 2020 (Independent review of complaints handling, investigations and misconduct issues in relation to policing) delivered a damning indictment of the lack of accountability and racism in police Scotland.

The last five years have been extremely damaging to Sheku’s family and public confidence in the investigation process and the prevention of the abuse of power and misconduct, but at the heart of this inquiry is a young black man Sheku Bayoh, whose two young boys will grow up without knowing their father.

Fighting for a proper investigation, never mind achieving robust and meaningful change, has involved the Bayohs in enormous challenges and obstacles at great personal cost to Sheku’s family.

Over the course of the five long years Sheku’s family have been lied to, patronised, smeared, with repeated attempts to bully them into silence.

Too often their needs have been reduced to the lowest priority by institutions who were more concerned about protecting their officers and flawed practices and procedures.

Today’s announcement is an importance milestone for the family and the appointment of the two assessors, with highly respected judge Lord Bracadale as chair fills the family with hope.

Raju Bhatt is a leading lawyer with a particular history of work with families who have lost their loved ones through death in custody and has been responsible for many significant developments in this and other areas of legal practice over more than 25 years.

Michael Fuller had a distinguished career as a police officer for some 34 years, as well as being the only black Chief Constable ever appointed in the UK to date. He was also instrumental in setting up the Racial and Violent Crime Task Force and drew up the Metropolitan Police action plan in response to criticism arising from the Macpherson Inquiry.

Whilst there are those who have desperately resisted any investigation into the issue of race, both Mr Bhatt and Mr Fuller’s experience on race and diversity issues will assist the public inquiry in uncovering the truth. Importantly both assessors are recognised as fearless with expertise across the full spectrum of policing from different standpoints.

To ask the Scottish Government when the public inquiry into the circumstances surrounding the death of Sheku Bayoh will begin its work.

“I am pleased to confirm that the Inquiry will formally begin its work on 30 November 2020. The Inquiry setting up date marks the point at which I hand over full responsibility of the Inquiry to Lord Bracadale and the work of the Inquiry will commence. One of the key elements to be completed was the appointment of assessors to support Lord Bracadale in his work. I am also pleased to announce today the appointment of two highly experienced individuals – Raju Bhatt and Michael Fuller. Both bring a wealth of knowledge to the role and I am confident they will bring diversity, balance and vital experience to support Lord Bracadale during the Inquiry.