john gaskell
Case Owner
I am a hardworking individual who bought a new-build home in anticipation of retirement in a few years time. The home is riddled with defects and I need your help to hold the developer to account.
Funded
on 09th April 2021
£3,005
pledged of £6,000 stretch target from 69 pledges

john gaskell
Case Owner
I am a hardworking individual who bought a new-build home in anticipation of retirement in a few years time. The home is riddled with defects and I need your help to hold the developer to account.
Share on Facebook

Will Heidi Allen step-up to the plate ?

Former South Cambridgeshire MP Heidi Allen ( who left the Tory Party because of her anti-Brexit stance ) is newly appointed chair of the CHS group, the registered charity that owns …

My name is John Gaskell and like many other hardworking new-build home buyers I bought a defective property, with all the distress and ongoing upset this has caused.

I need your help to hold Cambridge and Country Developments Ltd to account for selling me a sub-standard new home. Surveys and investigations revealed 150 snags & defects. After 18 months  around 40 issues remain outstanding, with estimated remediation costs of £35,000 to £45,000.

This case is about much more than my own circumstances: it is fighting back against a system which systemically fails to deliver the good quality housing we all deserve, either as a freeholder or leaseholder. This should be regarded as a fundamental right and developers must be held to account when they fail to deliver.

To defend this key principle, I need your help in raising £3,000 to meet costs of the legal assessment, serving notice of the particulars of claim, and towards ongoing legal costs.

Will Heidi Allen step-up to the plate ?

Former South Cambridgeshire MP Heidi Allen ( who left the Tory Party because of her anti-Brexit stance ) is newly appointed chair of the CHS group, the registered charity that owns Cambridge and County Developments Ltd, the company that sold me a defect riddled new-build home.  As Chair of our Residents' Association, I recently sent Heidi a note to ensure that she is fully aware of the problems hard working homebuyers have had to contend with on this 'small select development, built by craftsmen'.

I sincerely hope Heidi is as committed to holding her CEO to account as she was in upholding her anti-Brexit principles.

However, just to help Heidi Allen focus, here's a nice photo of work needed to rectify just some of defects in my newly built home, which Nigel Howlett, CEO CHS Group, had generally referred to as 'largely cosmetic or decorative' - class spin from your CEO, worthy of any Brexiter politician, Heidi. 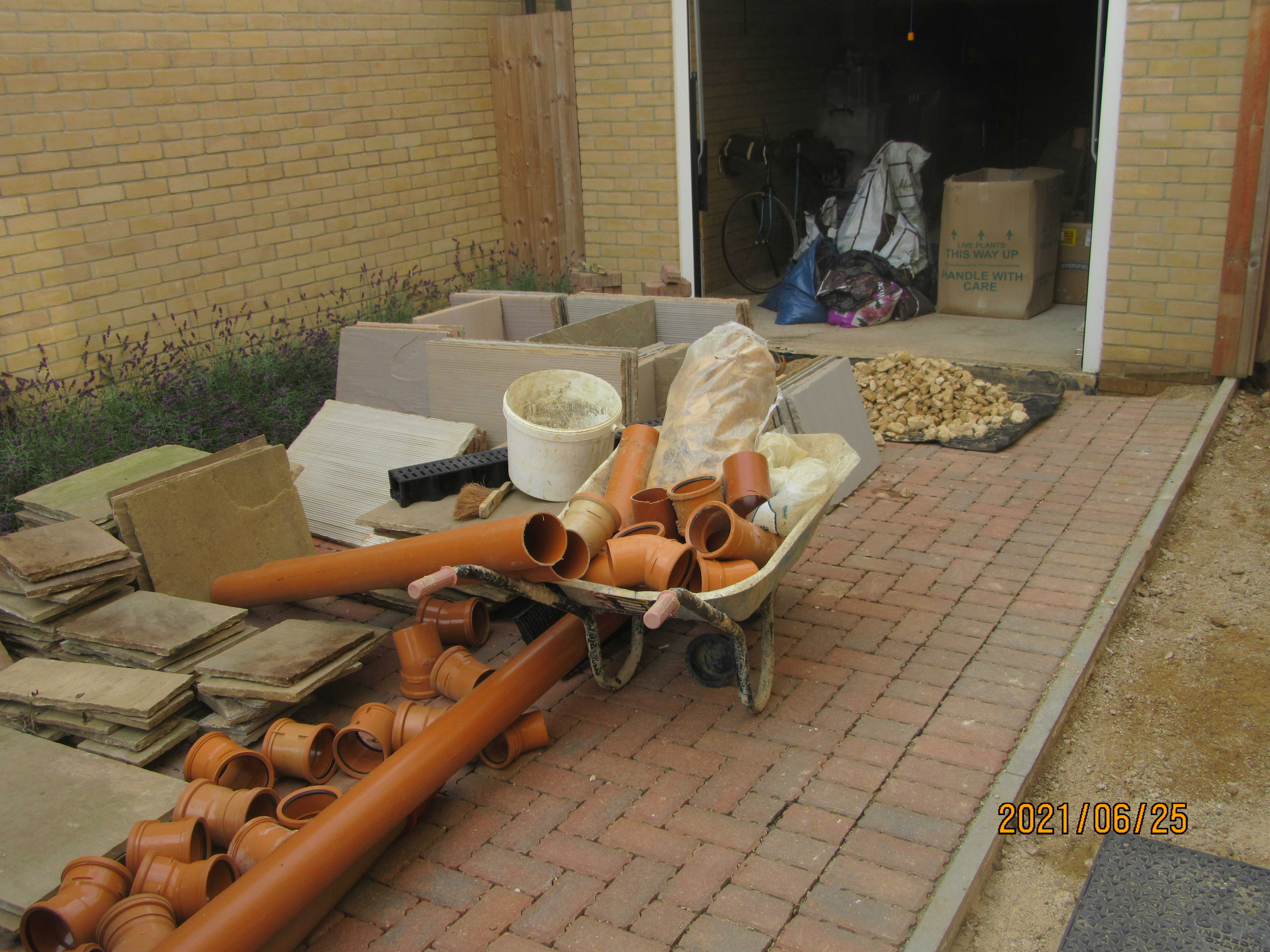 It's been a while since I updated my backers.

Thanks to you help, I finally managed to get the Developer's subcontractor to complete the extensive works required to rectify the substantial defects in my paths, patio and driveway ( photos to follow).

However, despite my providing Section 35 reports from an independent expert witness, Cambridge and County Developments have still not agreed to pay market cost remediation damages for the outstanding expensive works.  I may therefore need to reopen my fundraiser to raise more funds to meet the legal costs to hold the Developer to account for this. Updates to follow.

I am also pleased to say, that we now have an active Residents' Association up and running to help hold the Developer to account for systemic defects across the development. Heidi Allen, the former MP for our constituency, is the newly appointed Chair of the parent company and registered charity, CHS Group. The RA Association has written to Heidi Allen but she has not even acknowledged our communication, let alone replied. We think this is very shabby, to put it politely. The next stage will be an open letter to the press.

More updates to follow, with photographs of what Mr. Howlett, CEO, had referred to as 'largely cosmetic or decorative issues'. When you see the photos, I am sure you will agree Mr. H. has an odd definition of superficial !

From bad to worse

The Developer and it's parent, the CHS Group a registered charity, seem incapable, or unwilling (or both) to deliver on their promises and obligations.

Despite hiking home owners service charges by 160% to maintain the communal gardens & orchard, they have failed miserably to undertake the work to anything like the required standard. This was all part of the requirements the planning permission granted to them by South Cambridgeshire District Council and the ecological plan the Deveoper committed to abide by.

They never learn do they.

It's now been reported to SCDC's Enforcement Officer, who will no doubt me calling on their CEO, Nigel Howlett. Mr H. must be a busy man these days, as avoiding doing the right thing tends to be very time consuming.

I suppose it could be said it's all going pear shaped for Mr. H. !

Please listen to my broadcast on Cambridge Radio 105.

Some progress has been made

Following local and national press, and recent media ( Radio Cambridge 105 link to follow) coverage, and this successful CrowdJustice campaign, some progress has been made.

It has been agreed that a scheme of works will start work on 19th July (this year !) to address the problems with the paths, patio, driveway and surface water drainage problems. The Developer has also agreed to meet the costs of the outstanding plumbing works. However, I am still waiting for their CEO, Nigel Howlett, to agree to meet the costs of remediating the breach of Part M disability access building regulations and costs for a number of other outstanding issues.

Additionally, the Developer's parent, the CHS Group, has been sent a notification for overcharging of 18 homeowners on this small development in connection to the provision of communal services, and their failure to rectify aspects of shoddy work. Nigel Howlett is the CEO of both corporate entities. 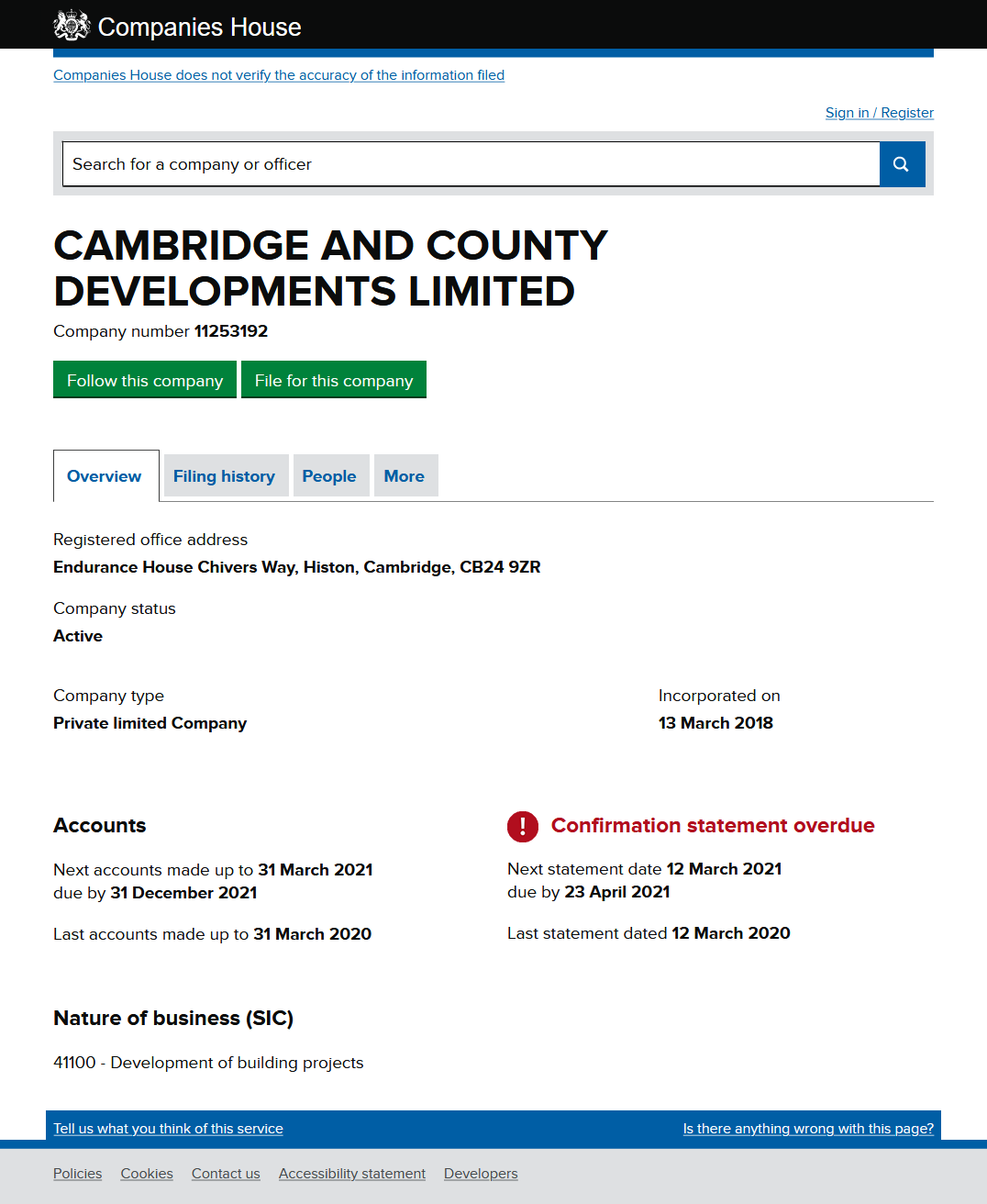 This week a chartered building surveyor & expert witness inspected my property and told me that the developer, Cambridge and County Developments Ltd, sold me a property that does not comply with disability access building regulations. I expect to receive a full copy of his Section 35 report later this week.

A Section 35 report can be used in court as substantive evidence if needs be, and as corroboration for Housescan Ltd's report, which first highlighted the problem. When I first raised the matter with the Developer last year, they dismissed it.

A special thanks to everyone that backed my campaign.

Cambridge and County Developments Ltd has been put on notice by the warranty provider and my solicitor is preparing a letter of claim that will be sent to the Developer in the next few weeks.

I am also pleased to able to confirm that since my campaign was launched a residents' association has been formed. We will be sharing our experiences and working in concert to try and get the Developer to finally step-up to the plate to put everything right in our new homes on this small development.

As quoted in local & national press, Nigel Howlett, CEO,  claimed he is committed to delivering 'exacting standards'. That makes sense given that his Company described my property as built by craftsmen to a high specification, impeccably planned inside and out on a select development.

I will leave you to judge whether he missed out the words, only kidding, it's a dog's breakfast really !

Respect – We see people as people and treat everyone with fairness, respect and dignity. Approach –We put as much emphasis on the way we do things as on what we do.  Deliver - We do what we say we will do and are accountable for their actions.

Well Nigel, it's time to walk-the-walk, by doing what you say and be held to account for your actions - your words not mine

So Nigel Howlett, as CEO of an ethical outfit, it's time to put on your big boy pants and - Stand and Deliver !  The game is up. Cough up.

Our campaign gets national coverage in the Mirror.

This worthy campaign has now got national coverage in the Daily Mirror.

Thanks to your support, the campaign is attracting more press coverage.

Please encourage your network to contribute and spread the word.   Every little helps.

More Press Coverage for the Campaign

This important and worthy campaign is attracting increasing press coverage, with more in the pipeline.

Please spread the word and encourage others to pledge.

The campaign is building. Please spread the word.

Thanks to your support the campaign has already attracted attention from the press. I will post details on Monday.

In the meantime, please spread the word and do what you can to help raise funds for this worthy cause.

Thanks you for your support.