Help stop roads being bulldozed through!

Help stop roads being bulldozed through!

In the summer we successfully got the Government to admit that it needed to review the national roads policy, after having twice refused to do so over the last year. Our challenges, enabled by public…

We are a national organisation, established in 2019, with over 50 years of campaigning experience between us. We formed to empower communities fighting destructive new roads and bus cuts, in order to tackle climate change, reduce social inequality, improve air quality, and protect green spaces and nature. Our campaigning against road schemes across the country has hit the national media, such as this recent story on the BBC. But we now need your help to reset the national rules to stop destructive proposals coming forward. 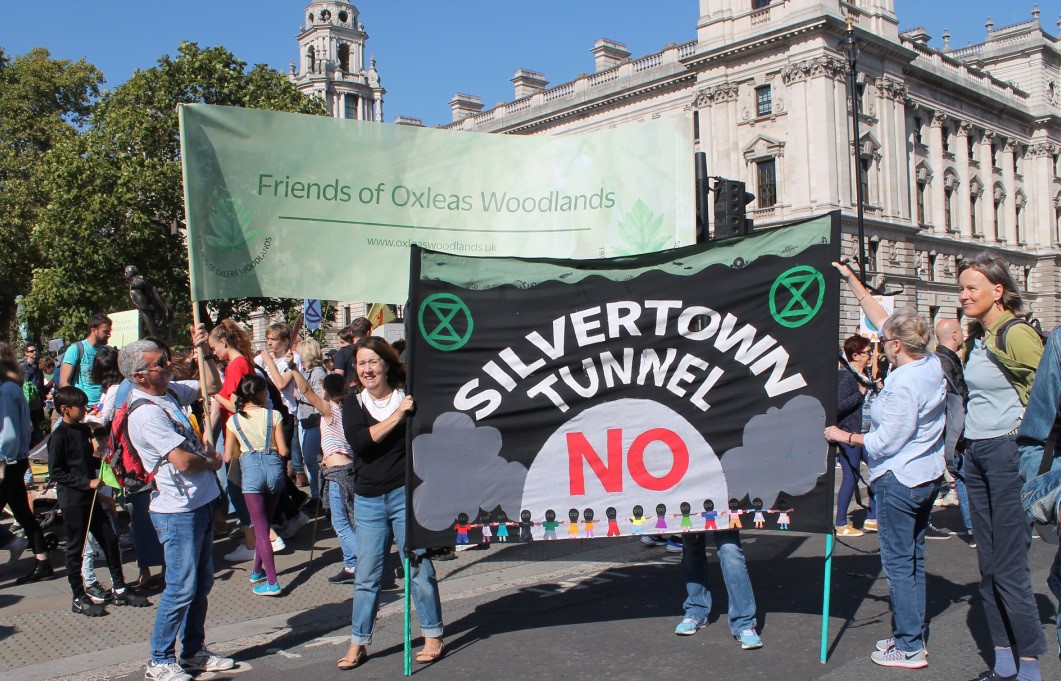 Some of the people we support: protestors against the Silvertown Tunnel

We are challenging the Department for Transport’s (DfT) refusal to review its outdated roads policy ("National Policy Statement for National Networks"). This sets out the Government’s view on road building and how major road schemes are judged in the planning system. Understanding of climate change, air pollution and biodiversity loss have all increased hugely since the policy was approved in 2014. While other government departments have changed their policies, the DfT refuses. It wants nothing to get in the way of its “largest ever” roads programme which will cost £90 billion by 2035. 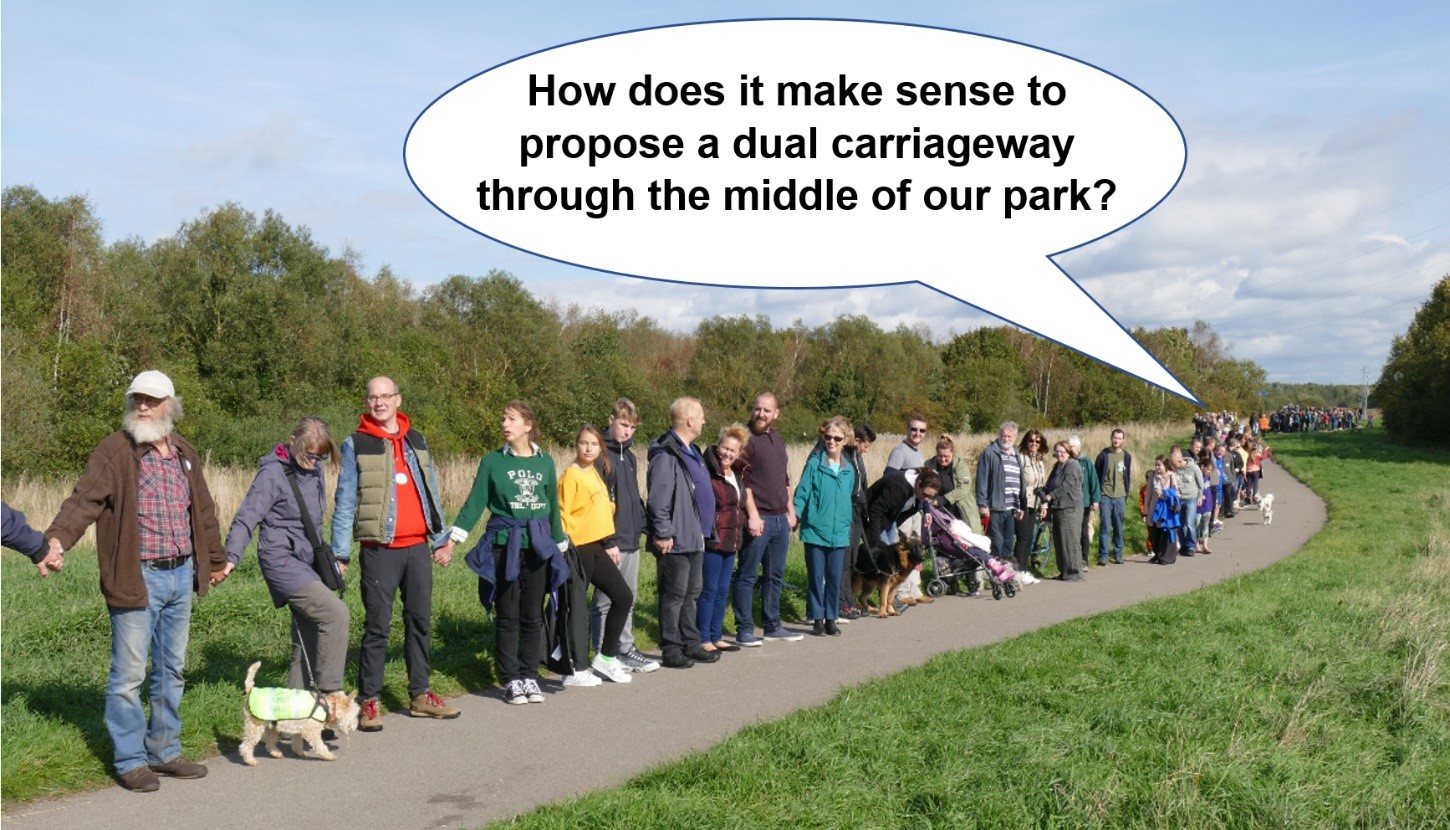 People all over the country are facing damaging road schemes being forced upon them. From Arundel in West Sussex to Rimrose Valley in Liverpool, from Lower Thames Crossing in Kent and Essex, to the A417 in Gloucestershire, local communities in these places and elsewhere face devastation.

It's because of current roads policy that bodies like Highways England feel confident proposing such damaging road schemes in the first place.

In Liverpool, for example, Highways England (DfT's road building arm) wants to build a dual carriageway down the middle of a country park. It knows permission is very likely to be granted - despite the current pandemic having shown the importance of green space. 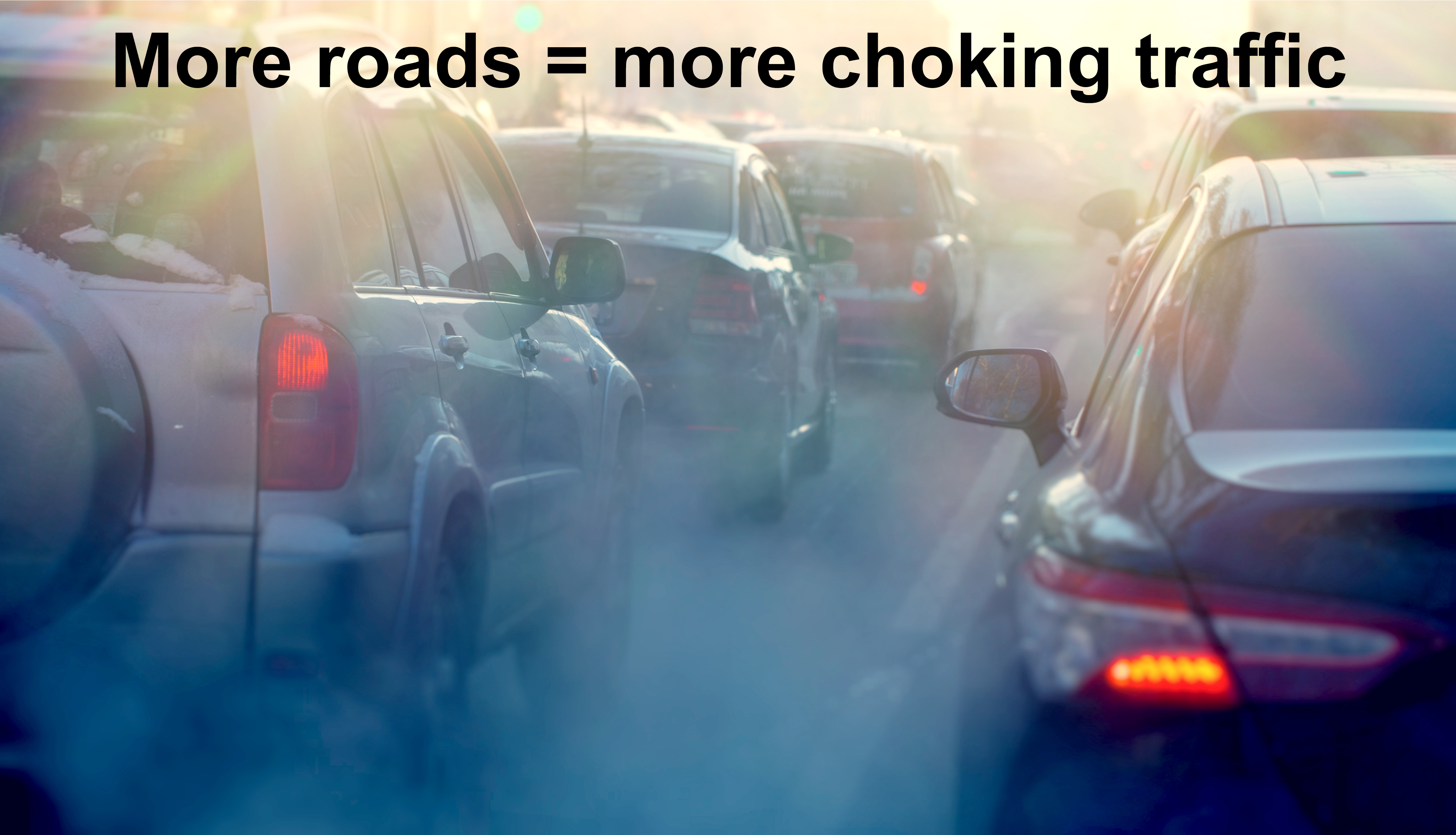 More roads create more traffic, creating more air pollution and congestion. With traffic rising after the lockdown, now is not the time to make things worse

Why is this case so important?

Local communities and environmental organisations have tried unsuccessfully to question this policy in planning inquiries and legal challenges against individual schemes. Despite surface transport now being the UK’s biggest source of carbon emissions, inspectors and judges are not allowed to take account of how laying more tarmac is speeding up climate change. Our only option is to challenge the policy head on through a legal challenge.

In addition, since the roads policy was adopted in 2014 there have also been significant changes in understanding of health impacts of air pollution (especially relevant in the pandemic), natural capital (in particular biodiversity) and good design. Our challenge calls on DfT to rethink its policy in all these areas. 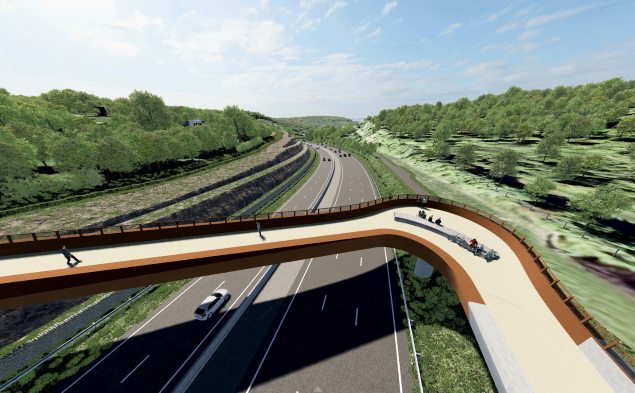 Highly damaging plans for the proposed new A417 in the Cotswolds Area of Outstanding Natural Beauty, including a mad picnic spot - part of the roads programme we’re already challenging

Yes, we are currently preparing to appear in the High Court in early 2021 to challenge the Government’s roads programme (Road Investment Strategy 2) which was announced in March 2020 without any assessment of environmental impacts. That case is about the decision to approve and fund that roads programme.

In contrast, this challenge is focussed on challenging the rules in the National Policy Statement that decide what’s allowed to be built. The two are connected but they are quite different legally and that's why we have had to bring a separate challenge.

How are you doing this?

We’re using the same legal team as our first case, helping us keep our costs down. We now need to raise around £30,000, although this might rise if we have to appeal. This is to cover lawyers’ costs, court fees and the risk of having to pay some of the DfT’s costs if we lose.

Funds will be used to cover our wider costs for this case or any potential appeal, and to support our roads campaigning including helping other road campaigns in the courts and planning system. 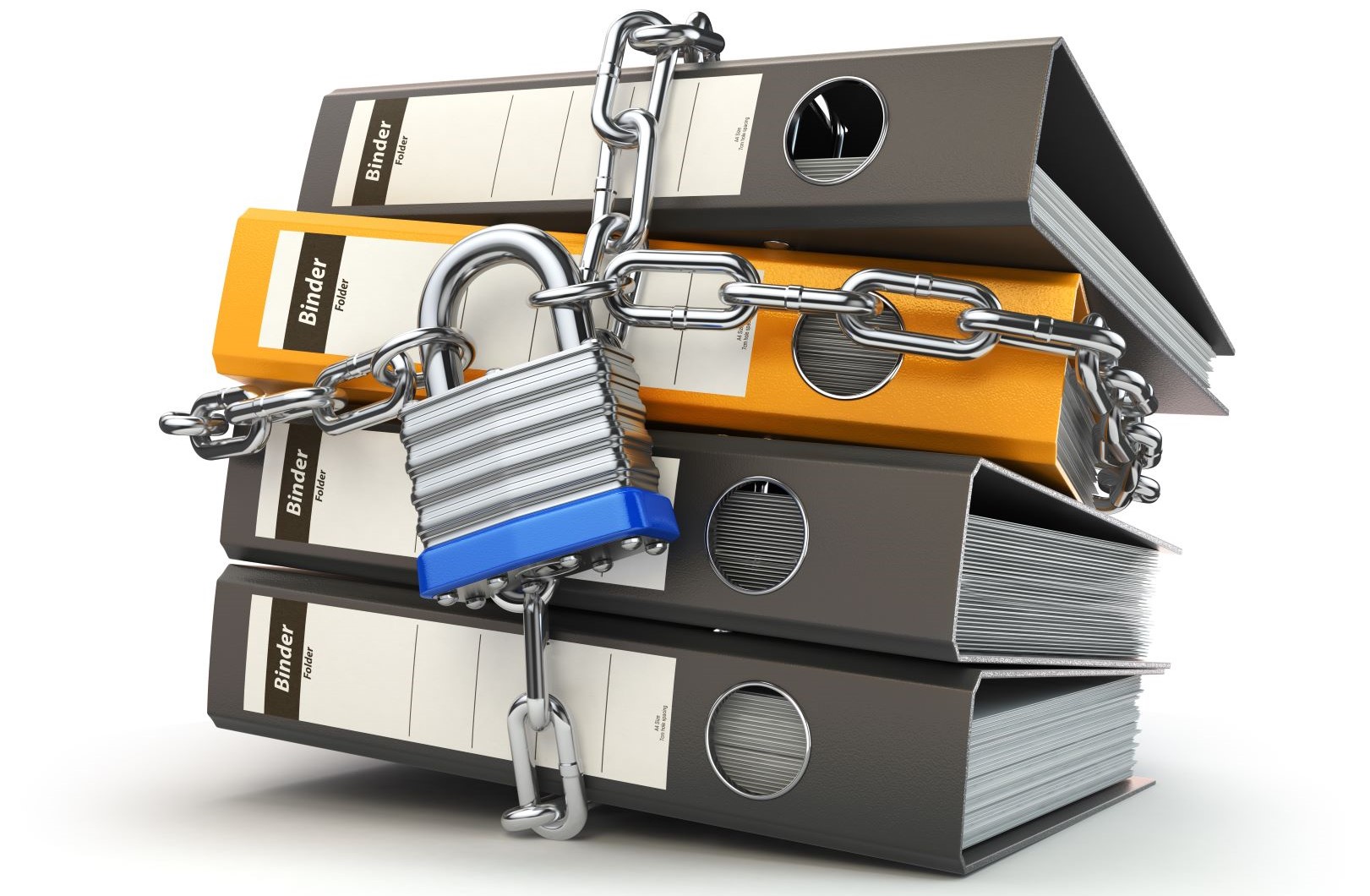 We first asked the DfT to review its road building policy in March 2020 but were unable to bring a legal challenge until it had actually taken a decision. It only told us it had refused a review in November, nearly two weeks after ministers had made up their mind. Because a six week time limit applied, this left us very little time to act. So we had to take the plunge and start legal proceedings.

As if that wasn’t bad enough, the DfT refused to disclose any documents about the decision until the day before the deadline. Even now it’s trying to keep the reasons secret!

We feel enough is enough. The Department for Transport needs to stop dragging its heels and stop playing dirty. It needs to start taking climate change seriously and take decisive action to cut emissions and put the environment at the heart of decision making. That’s why we need your help to put it in the dock, to force it to review its outdated and highly damaging policy on new roads.

In the summer we successfully got the Government to admit that it needed to review the national roads policy, after having twice refused to do so over the last year. Our challenges, enabled by public support, clearly helped change the Government's mind and forced it to face up to reality.

However, when announcing the review, the Government said that the outcome wouldn’t conclude until Spring 2023. In the meantime, its climate busting policies would remain in place, allowing it to carry on approving new roads with impunity. This would be four years after Parliament declared a climate emergency, hardly delivering the swift and urgent action needed to tackle climate change.

This delay of course is essential for the government to be able to approve a further 20 road schemes, including the largest new road for a generation, the Lower Thames Crossing. As the Times reported documents released to us show that the day before publishing its Transport Decarbonisation Plan in the summer, ministers sought advice from officials about “minimising the chilling effect on road building and completion by 2023”. Hardly inspiring confidence that tackling climate change was at the top of their agenda.

Other damaging schemes that could be bulldozed through by 2023 include the A303 at Stonehenge (despite the quashing of planning permission by the High Court), A5036 Port of Liverpool Access Road, A27 Arundel Bypass, A417 Missing Link, A358 Taunton to Southfields, A38 Derby Junctions and a whole tranche of schemes on the A47 in Norfolk and more.

That’s why we are seeking leave to challenge Grant Shapps’ refusal to suspend the national roads policy while the review is taking place. It is essential that those sections causing most harm, such as the one saying that carbon emissions are not a reason to refuse planning permission, are suspended, so that new roads can be properly scrutinised during the planning process. The fact that we’re even having to contemplate this action as COP26 draws to a close, shows how big a gap there is between rhetoric and action.

New challenge as ministers dig their heels in

It's been over a year since we first asked the Department for Transport (DfT) to review its roads policy. A policy that rubber stamps damaging road schemes and frankly belongs in the last century. In October the Transport Secretary, Grant Shapps, ignored his officials’ advice to review it and that's the decision we were able to challenge thanks to the generous support we received.

Then, last December the Prime Minister decided to ratchet up the UK's climate ambition, promising a 68% cut in carbon by 2030. So we were hopeful when government lawyers told us that Grant Shapps decided he needed time for a rethink. However, in March this year he again decided not to review his roads policy, even though his department is failing on climate change.

Due to legal advice, we brought a fresh legal challenge of this recent refusal, as the decision we were originally challenging had been superseded. Our new case should have an even greater chance of success as climate targets grow stronger.

We are also arguing the DfT should pay our costs from the first case, as the decision we challenged has effectively been withdrawn. If we’re successful we’ll be able to use most of the money we’ve already raised towards our second challenge, but we won't know the result of that for some time. Even then, we will still be short of our £30,000 target which ideally, we need to raise by the end of May to be able to respond when the DfT files its defence.

We are very grateful for previous donations and, whether or not people are able to donate, please share this CrowdJustice page far and wide. Concern about the climate emergency has only grown since we started this challenge. As The Times has reported, our new case could become an even more important precedent than we first thought, so long as we have the funding to continue.

Government tried to cover up that Shapps ignored official advice

Finally, we're able to tell you that Transport Secretary Grant Shapps ignored official advice and refused to review the Government's outdated road policy! The Government tried to keep this information from us and prevented us from going public with the news. However, now this bombshell has been exposed on the front page of the Guardian today, we are free to talk about it. 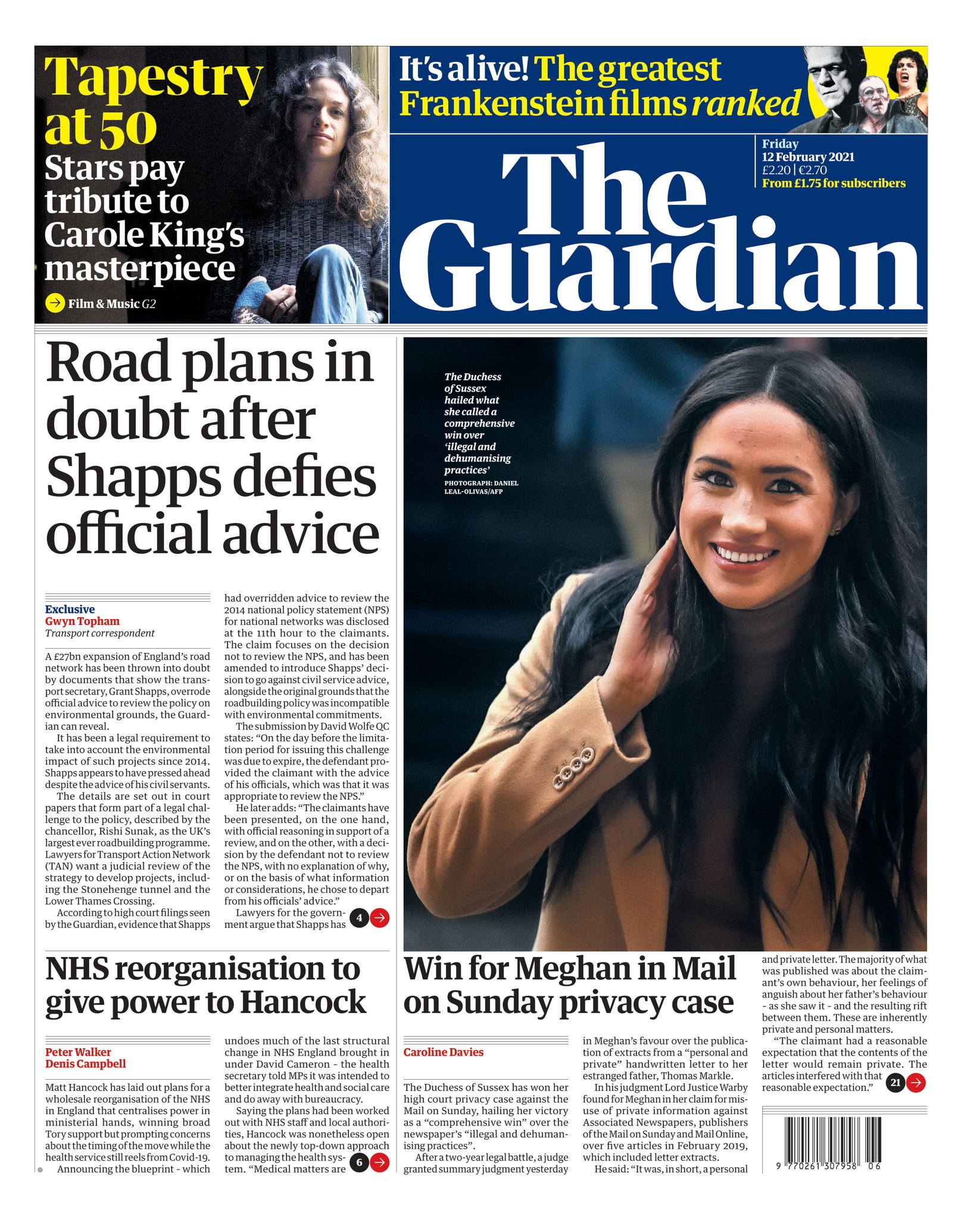 In March last year, you may recall, we wrote to Grant Shapps asking him to pause the roads programme and to review the National Policy Statement (NPS) on roads. We never received a reply to our letter although when we chased it up we were told that Grant Shapps would consider whether to have a review in the autumn.

In October he decided not to review the NPS. However, the Government waited nearly 2 weeks before telling us, leaving us with only 4 weeks to lodge our application for judicial review. Then it refused to give us any information despite repeated requests. Not until the day before we were due to submit our case, did it suddenly release the advice which exposed that Grant Shapps had ignored his officials. Even then the Government refused to release his reasoning.

The Department for Transport has now informed us that Grant Shapps will reconsider whether he now wants to review the NPS. A decision is due in early March.

At this stage we don't know what this it means. He might agree to review the NPS on all our grounds, or only some of them. Or he may refuse to suspend parts of the NPS which he agrees to review, such as on climate change. (Suspending these sections would stop him using these out-dated policies to continue to approve damaging roads while the review takes place).

With your help we hope to keep up the pressure and to continue to highlight the Government's hypocrisy when it talks about leading on climate change and building back better, while rubber stamping new roads regardless of their environmental and social impact.