Poisoning on the streets of London: Fighting Russian Lies

by Marina Litvinenko and Alex Goldfarb

Poisoning on the streets of London: Fighting Russian Lies

Marina Litvinenko and Alex Goldfarb
Case Owner
Marina is the widow, and Alex, a close friend, of the Russian dissident Alexander Litvinenko poisoned by Kremlin agents in 2006 with radioactive Polonium-210.
Closed
on 22nd November 2018
$900
pledged of $20,000 target from 13 pledges

Marina Litvinenko and Alex Goldfarb
Case Owner
Marina is the widow, and Alex, a close friend, of the Russian dissident Alexander Litvinenko poisoned by Kremlin agents in 2006 with radioactive Polonium-210.
Share on Facebook

We ask for your help in funding a defamation suit against two Russian propaganda outlets, Channel One and RT (Russia Today), which accused Alex of Litvinenko's murder in order to to vindicate the real murderers.

In the aftermath of the nerve agent attack on Sergei Skripal and his daughter in Salisbury last March, Russian state-controlled media broadcast several programs about the murder of Alexander Litvinenko in 2006 in London, pushing the narrative that Russia had nothing to do with both poisonings. To deflect the blame from the true poisoners they accused Alex Goldfarb of killing Litvinenko on behalf of the CIA. They did it without offering a shred of evidence and notwithstanding the fact that a British public inquiry found beyond doubt that two Russian agents, Andrey Lugovoy and Dmitry Kovtun, poisoned Litvinenko, and probably on the personal orders of President Putin.

Alex has brought a defamation lawsuit against the two Russian channels in New York where he is based. For legal reasons Marina, who lives in London, cannot be a party to thе lawsuit. Nonetheless, with good reason she is no less outraged at these malicious lies. She struggled for ten years to have Alexander's murderers named in a British court. Undermining this finding with a fake narrative before tens of millions of viewers only adds further pain to her devastating loss.

WHY THIS IS IMPORTANT

Much has been said about a Russian campaign to subvert Western democracies through propaganda and fake news. Little has been done to stop it. It is about time someone calls into account Kremlin's masters of disinformation who fabricate and spread lies while posing as respectable  journalists.

WHERE THE MONEY GOES

We were able to raise about $30,000 from friends, family and members of the Russian expat community to pay for the preparation and filing of the complaint. The costs of the actual trial may run into hundreds of thousands. At this point we appeal to the public to help us raise an additional $20,000, which is what our lawyers estimate will be needed for the initial stage of the litigation.

The money collected will be held in a trust account controlled by Alex's lawyers in New York. They will be used exclusively for legal fees and related out-of-pocket expenses (e. g. travel) but never for anyone's personal needs.

If there are unused funds in the end of the case, the excess money will be returned to CrowdJustice to be donated to a designated legal charity.

If you are concerned about confidentiality, please note that your donation will be only recorded as a charge to CrowdJustice.com on your bank or credit card statement.  There will be no reference to Goldfarb, Litvinenko, Russia or Putin.

If you wish to contact us directly, please write to litvinenkocampaign@earthlink.net. On this page we will post regular updates about further developments. And please share this page as far and wide as possible. 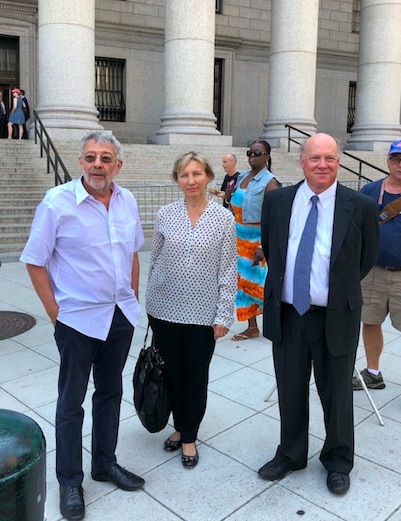 With our attorney Randy Sellier at the Federal courthouse in Manhattan after filing the complaint. 6 September 2018.