by London Gypsies and Travellers

The Court of Appeal handed down a very significant judgment,…

We are fighting a vital test case in the High Court, challenging Bromley Council’s intention to introduce a “wide” injunction banning anyone from stopping on open land. Over the past two years, 37 councils have taken out similar injunctions which threaten all Gypsies and Travellers with fines and imprisonment if they camp within their boundaries. If our challenge to Bromley succeeds, it will have major implications for what other councils can do.

Why are the injunctions wrong?

Gypsies and Travellers are recognised as ethnic minorities under the Equality Act 2010. Yet they are constantly discriminated against and excluded. Over many decades councils have failed to fulfill their obligation to provide sites and stopping places.

Many Travellers who live on the road, stopping where they can, don't do so out of choice. There simply aren't any other places for them to stay. Across London, just 10 new pitches for Travellers have been built since 2008 when over 800 are needed. 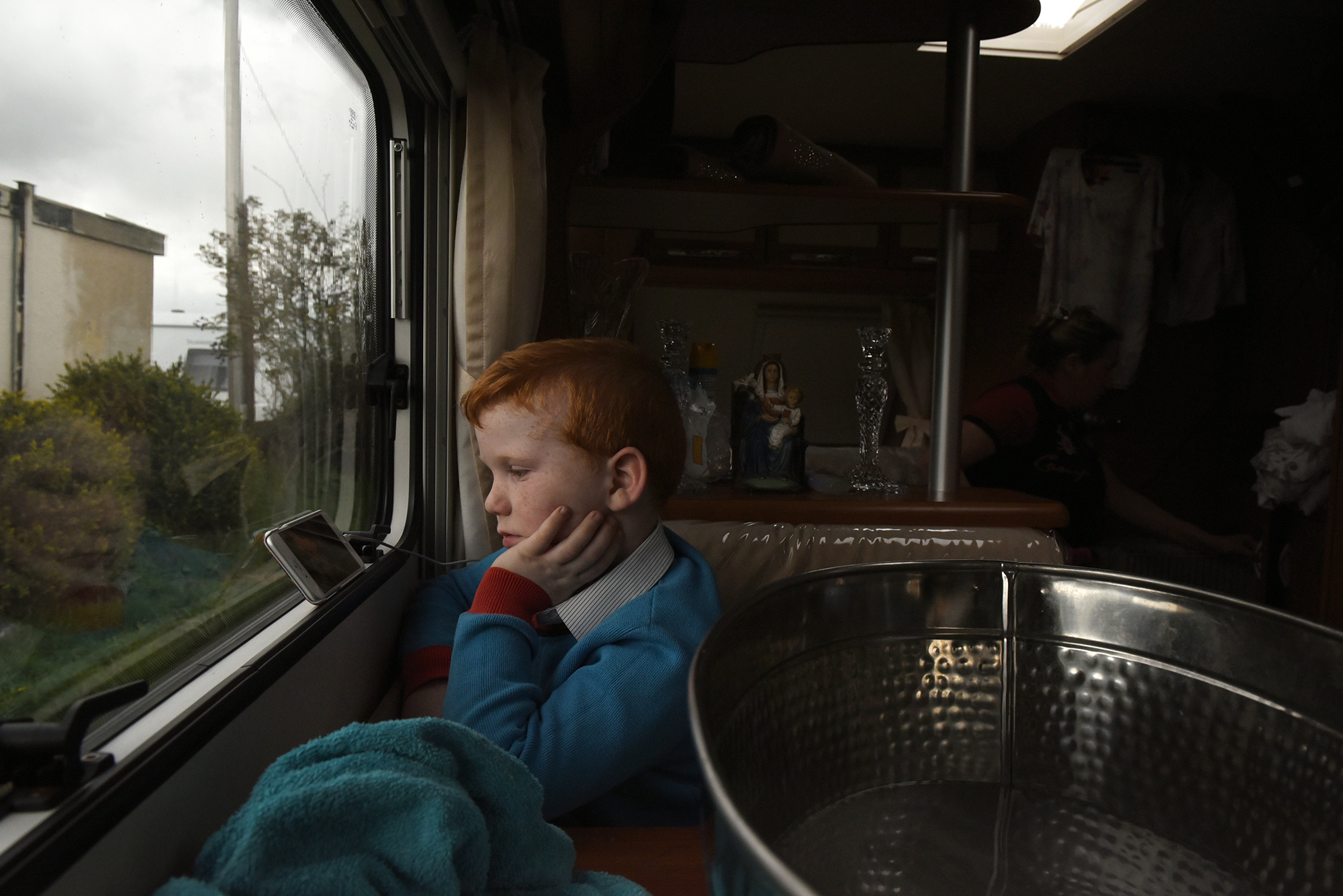 What are the effects of the injunctions?

The injunctions effectively criminalise a way of life that goes back centuries, when all of us are meant to be protected by equality law.

We believe they break the Equality Act because, though the camping bans apply to everyone, Gypsies and Travellers are most affected. It is not right that while councils are failing to provide sites and stopping places, they are effectively banning Travellers from whole areas.

The injunctions don’t solve anything. They simply push Gypsies and Travellers to stop on the roadside in other areas. Continual evictions cause greater hardship for families on the roadside – encouraging public prejudice, disrupting family life, threatening health and wellbeing and preventing access to education, work and services. 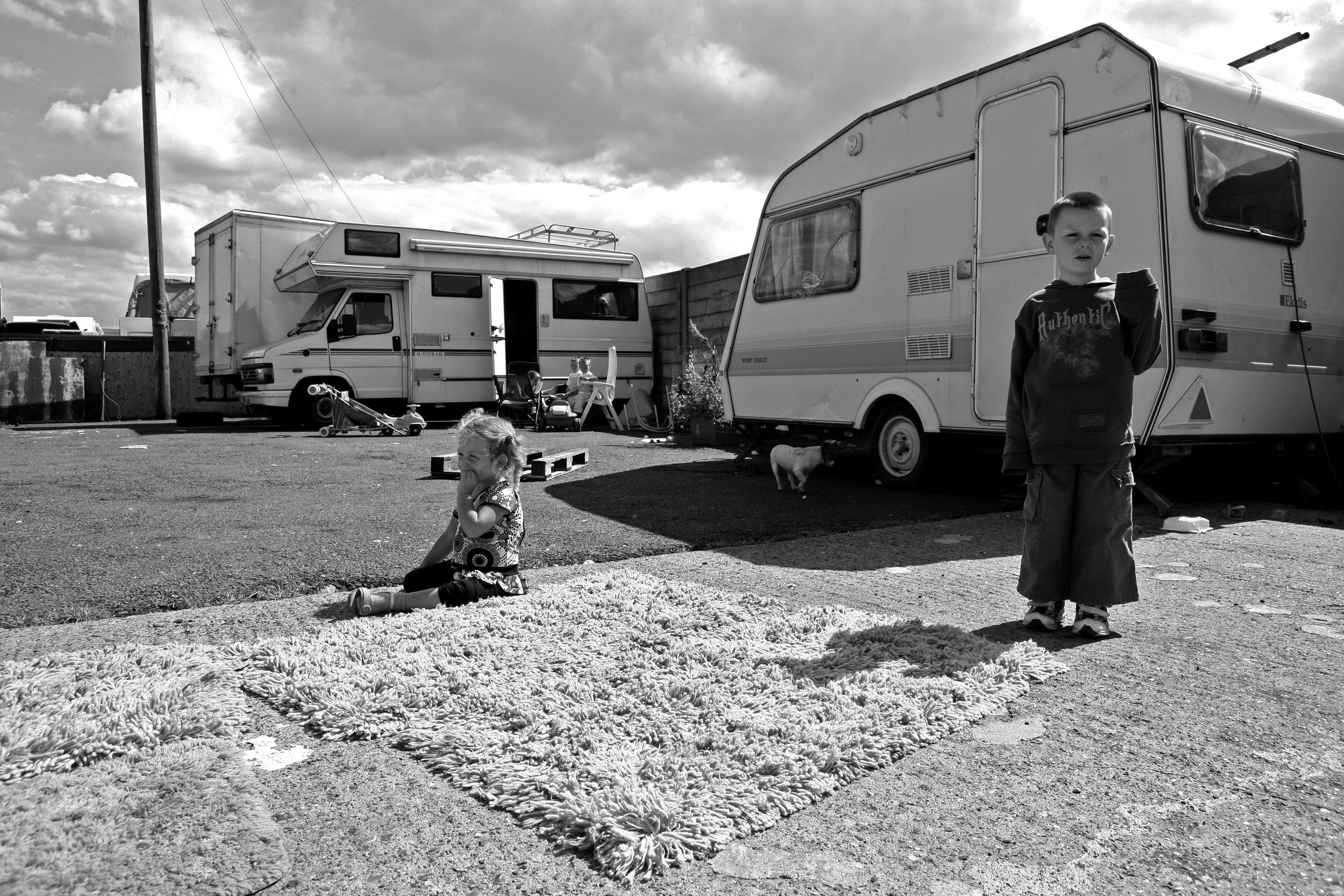 Why we need your support

London Gypsies and Travellers has already taken on Bromley Council in the High Court, challenging its injunction application to stop Travellers and “persons unknown” from camping on 171 open spaces and car parks. We won. The judge recognised that simply pushing families out of one area into another was not a solution and criticised Bromley for not considering alternatives such as negotiation.

But now Bromley Council are appealing the ruling on 3rd December. There's limited time and we need to make sure they don’t win, or this situation will get worse. We are trying to raise £8,000 to help fund the challenge. We need your support to allow us to do this.

If Bromley win their appeal, it will have major implications. More and more councils will apply for and obtain injunctions, and more and more families – particularly children, the elderly and sick – will be affected. There are alternatives.

We simply want councils to consider their lack of site provision and negotiate with families instead of making them into criminals. Please help us let reason prevail. 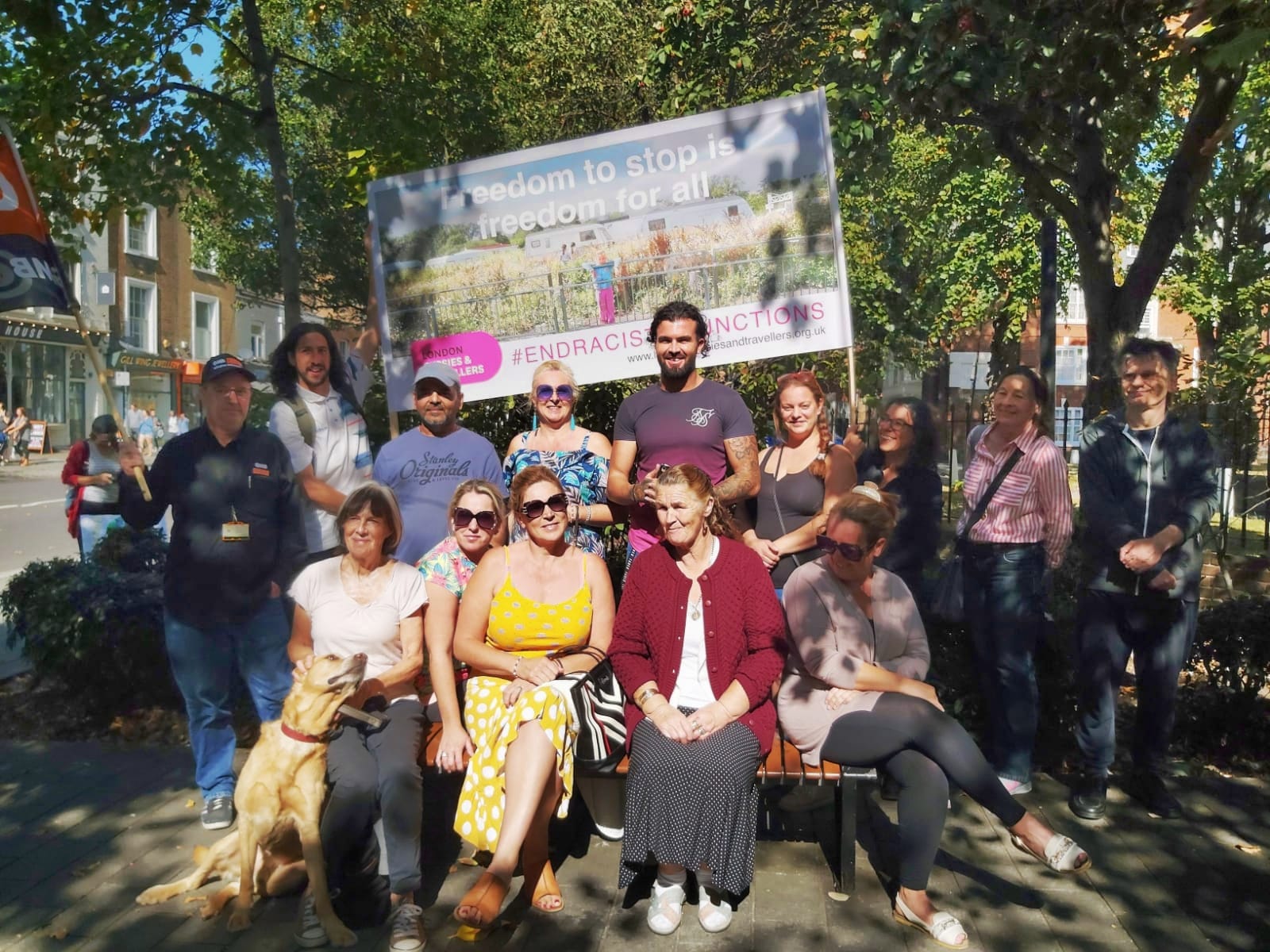 The Court of Appeal handed down a very significant judgment, dismissing an appeal by Bromley Council against the High Court’s decision to refuse the Council’s application for an injunction against “persons unknown” stopping on public land in the Borough.

The ruling has major implications for local authorities who have, or are seeking, similar bans. It also has potential ramifications for the government’s proposal to criminalise trespass. The Court of Appeal judges held that “borough wide injunctions are inherently problematic” and they “comprise a potential breach of both the [European] Convention [on Human Rights] and the Equality Act”.

The judges also emphasised that existing legislation and case law “make plain that the Gypsy and Traveller community have an enshrined freedom not to stay in one place but to move from one place to another”.

Importantly, the Court of Appeal provided guidance to local authorities contemplating seeking a wide injunction. Such authorities should provide evidence showing what other suitable and secure alternative housing or transit sites were available. They should engage properly with the Gypsy and Traveller community and should assess what impact an injunction might have, taking into account the specific needs, vulnerability, and different lifestyle of the community.

London Gypsies and Travellers intervened in the proceedings before the High Court and Court of Appeal with legal representation, substantially pro bono, from Marc Willers QC and Tessa Buchanan of Garden Court Chambers and Chris Johnson from the Community Law Partnership. Challenging local authority injunctions which discriminate against Gypsies and Travellers has been a major focus of LGT’s work over the last two years.

“We are extremely pleased with this result and proud to have been involved in such an important case which advances the recognition and protection of the nomadic way of life in the UK”, says LGT Chief Executive Debby Kennett. “The judgment sets a high standard for councils seeking injunctions and stresses the need to put in place adequate and safe provision. We are keen to work with councils to explore alternatives to evictions and injunctions, such as negotiated stopping.”

Commenting on the decision, Marc Willers QC of Garden Court Chambers said: “Very importantly, the Court of Appeal has stated in this judgment that an injunction which prevents Gypsies and Travellers from stopping at all in a defined part of the UK comprises a potential breach of both the European Convention on Human Rights and the Equality Act. Given that finding, it is difficult to see how the government can possibly justify its proposal, which is currently out to consultation, to criminalise trespass.”

Waiting for the judgement 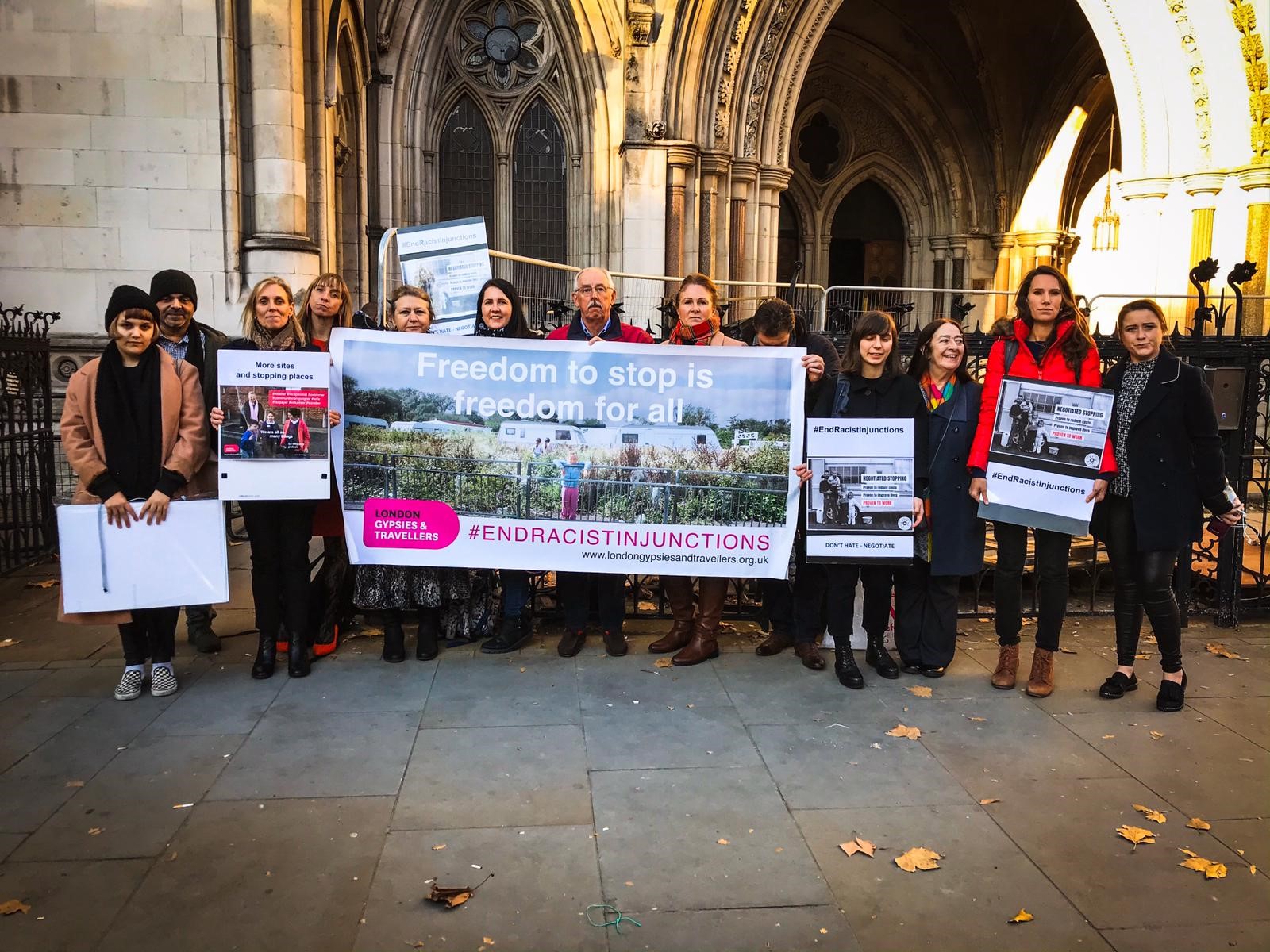 The injunctions appeal hearing finished on Tuesday 3rd December. We're now waiting for the judgement!
Our legal team did a brilliant job so please keep following the case on this page and share it as much as you can. We've still got to raise up £8000 and would really appreciate your help getting the word out!

“The injunctions don’t solve anything,” says Debby Kennett, LGT’s Chief Executive. “They simply push Gypsies and Travellers to stop on the roadside in other areas. Continual evictions cause greater hardship for Gypsy and Traveller families on the roadside – encouraging public prejudice, disrupting their family life, threatening their health and wellbeing and preventing access to education, work and services.”

“There are alternatives to injunctions. We simply want councils to consider their lack of site provision for Gypsies and Travellers and negotiate with families instead of making them into criminals.”

Our most recent report 'The potential for a negotiated stopping approach in London' brings tangible alternatives to evictions, injunctions and criminalisation. Read it here: http://www.londongypsiesandtravellers.org.uk/news/2019/12/04/new-lgt-report-on-negotiated-stopping-in-london/

Thanks to everyone who supported this important challenge so far!

The vital court hearing on 3rd and 4th December will examine whether local councils can go ahead with injunctions outlawing Gypsies and Travellers from stopping on open land – and criminalising a centuries-old way of life.

We firmly hope the judges in this appeal will uphold the earlier judgement. This would uphold basic human rights, and recognise Gypsies and Travellers’ nomadic way of life and their long history in London boroughs and beyond.

You can read more about this on our website: http://www.londongypsiesandtravellers.org.uk/news/2019/12/02/judges-hear-case-on-criminalising-injunctions/

We'd like to say a huge thanks to everyone who donated and supported our campaign so far!

Thanks to all of you we reached our initial all-or-nothing target which means we are now guaranteed to get the funds at the end of the crowdfunding period.

We have three weeks left to raise the rest of the funds up to £8k to support the legal challenge.

Please keep sharing this campaign with family, friends and on social media to help us get the word out about this important case.

The first day of the appeal hearing at the Royal Courts of Justice is 3rd December. Please come and show your support if you can!