At 7:30AM this morning, the Aziz Brothers landed at Dulles International Airport and were processed by customs. At 8:30AM, they walked out of the secure area and into their father's arms.

Tareq and Ammar Aqel Mohammad Aziz woke up on January 27th thinking they were finally, after years of waiting, going to come to the United States to live with their U.S. Citizen father.

But their dream turned into a nightmare when the brothers, 21 and 19 years old Yemeni nationals, arrived at Dulles International Airport (Dulles) just hours after President Trump signed his executive order on immigration.  Upon exiting their plane, Tareq and Ammar were handcuffed, detained, and forced to sign papers that they had neither read nor understood.  Those papers signified a "voluntary" waiver of their legal immigration status.  They were then put on a plane to Ethiopia, the location of their layover on their way to Dulles.  As of this writing, they are still in the airport, unable to leave and with no place to go.

The goal of our litigation is to force the United States government to bring Tareq and Ammar back to the United States and to restore their immigration status.  We are seeking the same for each of the other ~60 Visa holders and Legal Permanent Residents (LPRs) deported from Dulles under similar circumstances.

We filed originally on the evening of January 28th, asking Judge Brinkema to issue a Temporary Restraining Order to stop deportations from Dulles and to ensure those detained were provided lawyers.  That order was granted almost immediately, but Customs and Border Protection officers at Dulles refused to comply.  On January 29th, we filed an amended complaint detailing their non-compliance and seeking relief for Tareq and Ammar and the others similarly deported or detained. 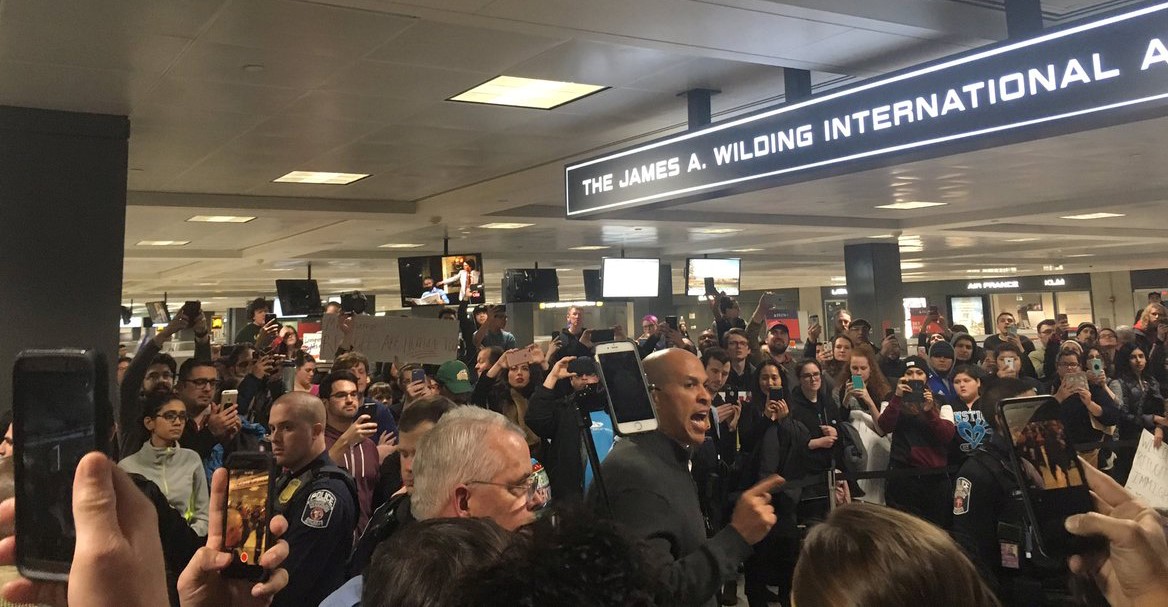 We cannot allow these abhorrent, dehumanizing executive orders to needlessly rip apart the lives of these men, women, and children.  Your support will help us ensure that we have the capacity to fight this battle as long as it takes.  We are not the ACLU or SPLC.  We haven't received millions in financial support.  We need your help to keep this fight going.  Support our case and show President Trump that wherever he takes this fight, whomever he illegally targets, the American people will resist him with everything we have.  Thank you. 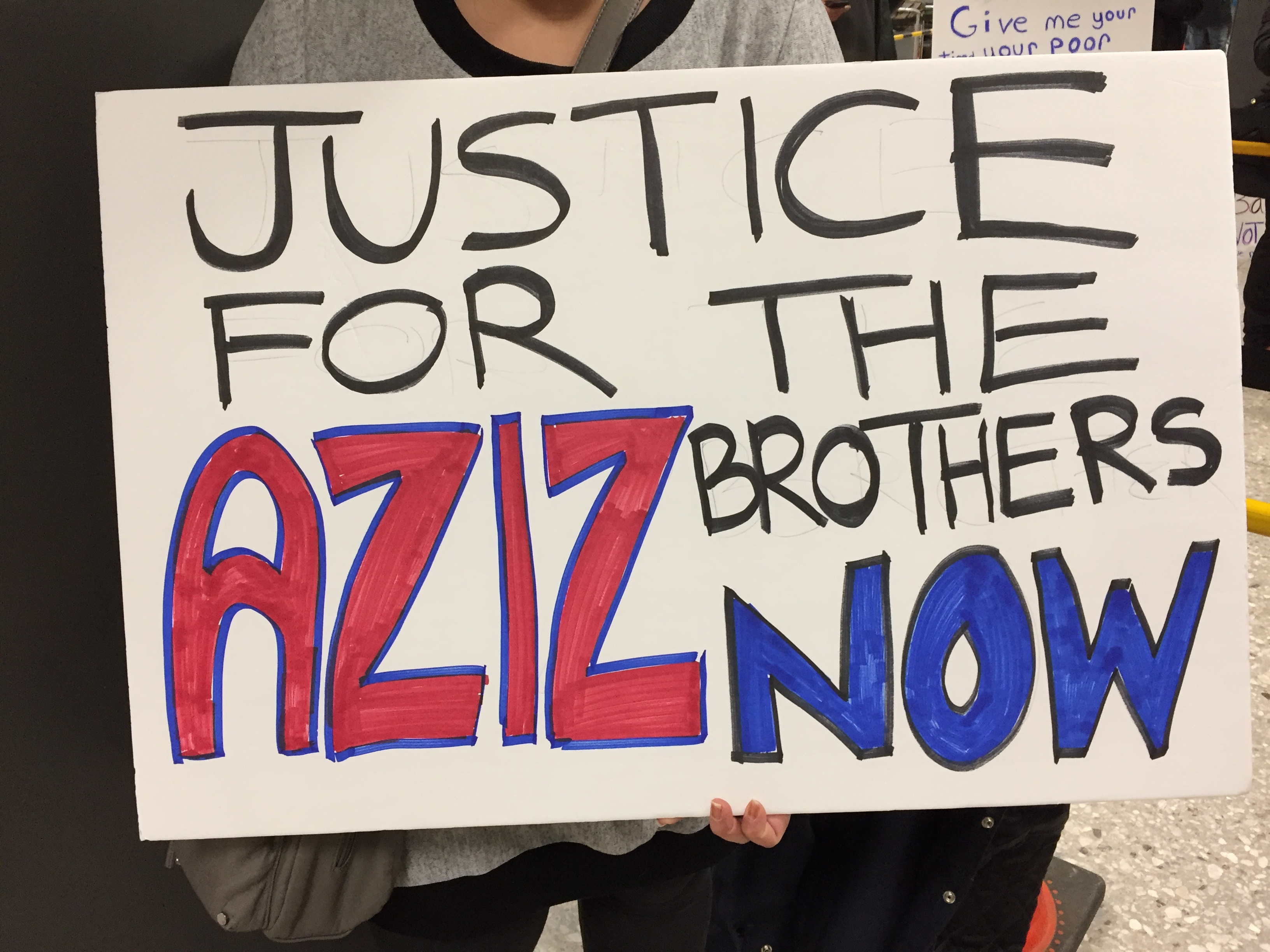 At 7:30AM this morning, the Aziz Brothers landed at Dulles International Airport and were processed by customs. At 8:30AM, they walked out of the secure area and into their father's arms.

To all of the case's supporters: THANK YOU! Your financial support, your offers to help with everything from lunch for our staff to translators, to places to stay in Djibouti, your encouragement, your everything - it all helped us to fight to make this possible.

From Tareq Aziz:  "I just want to thank all the people who support us and who were there with us.  They made me feel like there is a family here.  That we have a family.  That's what I love about America.  Thank you all."

From the Aziz Brother's Dad Aqel: "Thank you for every single person who helped me bring my kids back.  This is America.  America is for everybody.  Thank you!  Thank you!

A REVIEW OF CASE EVENTS

When President Trump signed his executive order on immigration, like so many Americans, we were outraged.  On Saturday the 28th, an email started circulating among our staff with lawyers and organizers planning to attend the protests at Dulles. By mid-evening, we had decided to jump in and file litigation on behalf of those detained.

The next 10 days were a whirlwind.  That night, on behalf of the Aziz Brothers and dozens of other travelers, we secured one of the first two restraining orders against the Trump administration's ban, specifically on behalf of people detained at IAD.  Almost immediately, we entered into negotiations with the U.S. Attorney to try to restore our clients' Visas and bring them home.

While those negotiations proceeded, the Commonwealth of Virginia motioned to intervene in (join on our side of) the case, as did several other attorneys representing individuals or families. Virginia then filed a contempt motion arguing that that the administration had willfully refused to give detained persons access to attorneys.  While this was happening, we secured an agreement with the U.S. Attorney to bring the brothers and another family of seven home.

Last Friday at a tense hearing in our case, Judge Brinkema of the United States District Court for the Eastern District of Virginia allowed the Commonwealth of Virginia and others to intervene but declined to find contempt. During the hearing, the U.S. Attorney admitted that "over 100,000" Visas had been revoked.  (The State Department revised that number to 60,000.)

Later that night, Judge James Robart of United States District Court for the Western District of Washington issued a temporary stay on almost the entirety of President Trump's executive order nationally.  Those who had had their Visas revoked are now allowed to come into the US. The question now is what that means practically for individuals who had been forced to "voluntarily" withdraw their Visas and whose passports had "CANCELLED" stamped on them.

On Saturday night, we learned that it meant that INTENSE advocacy was needed with every security guard and airport official between the front door and the plane itself to allow our clients to board.  After several harrowing hours of back and forth, all nine of our clients boarded their flight back to IAD. And now they are home with their family, with their green cards, with their dreams of going to college in the U.S. intact.

As this case closes on CrowdJustice, please know that the Legal Aid Justice is in this for the long haul.  We know this is a time of unprecedented peril for the immigrant community.  When there's the next executive order or when there are unconstitutional immigrant raids, we will continue to be there to advocate for our immigrant brothers and sisters.

We are thrilled to report that Tareq and Ammar have landed at Dulles Airport and are being processed prior to reuniting with their father!

Thank you again for supporting this case and for encouraging others to do the same!

This morning was the first court hearing in Aziz v. Trump since our motion requesting a Temporary Restraining Order was granted. Several huge developments to report.

Watch this space for additional details and our announcement of when and where Tareq and Ammar will land back in the United States.

These are all very positive developments for Aziz v. Trump - however, this case is still very much an active effort and it impacts far more people than simply the Aziz brothers. Even if Tareq and Ammar are allowed entry to the United States, there are many other individuals who haven’t yet been identified and still need help. Thank you again for supporting our work by contributing to this case and spreading the word! And please keep it up - the fight is far from over!

Tareq and Ammar are unhappy to have been deported from Ethiopia to Djibouti, but at least have managed to get a good night’s sleep and two solid meals for the first time since Saturday. They are grateful that so many people care about their well-being. We are working with them to try to identify the other families in Djibouti who were similarly deported.

Thank you again for supporting this case and for encouraging others to do the same.

Today, the Commonwealth of Virginia announced that it is seeking to intervene in our litigation on behalf of the Aziz brothers, and others similarly situated, who are lawful permanent residents or immigrant visa holders and who were denied entry to the United States over the past weekend on the basis of the recently-issued Executive Order.

This means that they want to be added as an additional attorney for the plaintiffs (Aziz Brothers and others). Essentially, they want to sue Trump too on behalf of the same group of people, seeking the same relief. Their justification for joining is that they will represent the interests of Virginia's public Universities whose students and faculty are adversely impacted.

We are still reviewing the legal documents (below), but we believe this is terrific news of a new ally in our efforts.

Please continue to share our page and ask your friends to join you in this fight.

We hit our initial goal - THANK YOU!

This case and this crowd funding campaign have been an incredible whirlwind, and we are committed to making sure you, our backers, have up to date information about our case and how we're using your support.

That will include introducing you to other families all over the world who are in the same situation as the Aziz Brothers in the next few days.

In the meantime, please continue to share our campaign link. Let folks know it's the best way to get updates about the Aziz brothers and this case.