Defend the charity that defends the human rights of vulnerable people

by Compassion In Care

Defend the charity that defends the human rights of vulnerable people

Compassion In Care
Case Owner
Compassion In Care was founded as a result of Bupa7 whistleblowers' experiences. Edna is always at the heart of all we do. We blow the whistle on wrongdoing reported by our helpline Callers.
13
days to go
£2,158
pledged of £5,000 stretch target from 72 pledges
Pledge now

Compassion In Care
Case Owner
Compassion In Care was founded as a result of Bupa7 whistleblowers' experiences. Edna is always at the heart of all we do. We blow the whistle on wrongdoing reported by our helpline Callers.
Pledge now

Thank you all for your support and patience in waiting for news, we expect to be able to post an update soon.

Meanwhile this free online event will help in understanding the issues involved.

Compassion In Care is a small charity which has helped over 13,000 people going through one of the most difficult times in their lives and we support some of our Callers for years.

We have no paid Staff and our budget for the last three years has been under £10k annually. It is one of the most value for money and effective charities in the whole country.

We do not take funding from Government or the care industry so we are truly independent and therefore able to expose abuse of vulnerable people and to challenge Government and care providers. We have done so particularly during the Covid crisis about the policy which led to 1000s of avoidable care home deaths.

Summary of our case

We called for transparency and accountability of WhistleblowersUK (WBUK) and the All Party Parliamentary Group on Whistleblowing (APPG) to which we and other campaigners reported evidenced concerns about WBUK.  The APPG dismissed all concerns.

As a direct result of exposing WBUK’s exploitation of whistleblowers and unethical conduct, Compassion In Care was targeted with politically motivated, malicious and unfounded allegations to the Charity Commission, causing distress, delay and disruption to our beneficiaries, volunteers, and trustees.

We know that the complaint was instigated by the WBUK Chief Executive & APPG Director Georgina Halford-Hall due to the wording of the allegations which are almost identical to her previous malicious complaint to the Information Commissioner’s Office.

We were able to prove that she had deliberately misled the ICO because we eventually obtained a copy of that complaint, but the Charity Commission has refused to give us the current complaint letter.

We have been told by the Charity Commission to remove material from our website.  We refuse to do so because it all relates to elderly care, whistleblowing, and the rule of law and it is all evidence-based.

The Charity Commission is also trying to stop the charity from campaigning for #EdnasLaw.  Political censorship of a charity is totally unacceptable and cannot be tolerated.

The Charity Commission has failed so far to grasp that our work makes this charity vulnerable to malicious complaints so now we have to crowdfund for a lawyer who will explain to it how whistleblowing impacts on elderly abuse and that all of our website content meets the criteria of the charity’s aims and objectives.

Our lawyer will explain also to the Charity Commission that the instigator is trying to use its complaints process to stop our campaign for #EdnasLaw, because she has a personal interest in another proposed law which we oppose, and that she and WBUK would benefit if the attempt succeeds.

The public support for Edna’s Law is the biggest obstacle to WBUK’s law proposal which is intended to benefit their corporate funders and themselves, not whistleblowers or the public interest.

The Charity Commission seems to imply that there is a risk of further action against this charity if we attempt to defend ourselves by challenging their conclusions.

Conduct of the investigation

The Charity Commission must investigate all complaints and we have co-operated fully and promptly throughout. We believe that there needs to be more awareness that complaints may be made with malicious intent, as in this case.  The Charity Commission must read and take account of all the evidence – which has clearly not happened in this case because the Commission has come to conclusions which are contrary to the evidence submitted.

We responded within 24 hours with copious evidence of our work and showing that the allegations are unfounded, followed later by more evidence in response to further questions.

We know that the instigator’s motive is to try to discredit the charity, to disrupt our work and to prevent us from publishing more evidence about her and WBUK.  There is a risk of the attempt succeeding unless the Charity Commission fully understands the work of this unique charity which is always evidence-based.

The motive, means and opportunity to harm this charity are all present.

WBUK’s Parliamentary role and links with senior people in various parties may have influenced the investigation.

The charity has very limited resources and this attack has come during the pandemic when we are supporting over 330 helpline Callers. We must ensure that this charity is protected now and in future, and that it can continue its work exposing human rights abuses.

In effect this charity has blown the whistle on wrongdoing and the allegations are retaliation for exposing serious abuses, false claims and unethical conduct.

We urge you to visit the Compassion In Care website to understand the full background and why our work is opposed by the people and organisations whose wrongdoing and agenda we expose.

We need and appreciate your support: please contribute and sharing this page will be a huge help.

1. The Charity Commission needs to review all the evidence thoroughly and to withdraw the unjust conclusions of a seriously flawed and politically biased investigation.

2. Full scrutiny is required of the complaint against Compassion In Care, and the Charity Commission should use its existing powers to prosecute the malicious complainant.

3. Political censorship of charities' work must not be allowed to occur.

4. We want to ensure that the Charity Commission will never again aid and abet those making malicious allegations in order to silence a charity.  This is a whistleblowing situation and our charity must be protected from any recurrence because we are vulnerable to future complaints, due to exposing misconduct and challenging Government policy which adversely affects those for whom we fight.

Our aims will protect other small charities too because prosecution of malicious complainants is essential as a deterrent and political censorship of charities’ work is unacceptable - fighting it is more important than ever now.

The first action is for expert charity lawyers to represent us with the Charity Commission to ensure thorough scrutiny of all the evidence, including the original complaint document and the conduct of the investigation.  The conclusions must be made on the evidence and for no other reason.

This is essential because the motive of the complainant was to discredit the charity and the trustees and if the current conclusions stand it would risk lasting damage to the charity.

We are raising £2000 to cover the lawyers’ review of all the evidence and their initial dealings with the Charity Commission.  We know that the full legal fees will cost more but the way CrowdJustice works is that the initial target has to be raised within 30 days.  Many of our supporters are on low or even zero income (eg whistleblowers who have lost their jobs) so we need to be realistic to be sure of reaching the initial target within the time limit.

Thank you very much for your support.

Thank you all for your support and patience in waiting for news, we expect to be able to post an update soon.

Meanwhile this free online event will help in understanding the issues involved.

We hope you can join us. 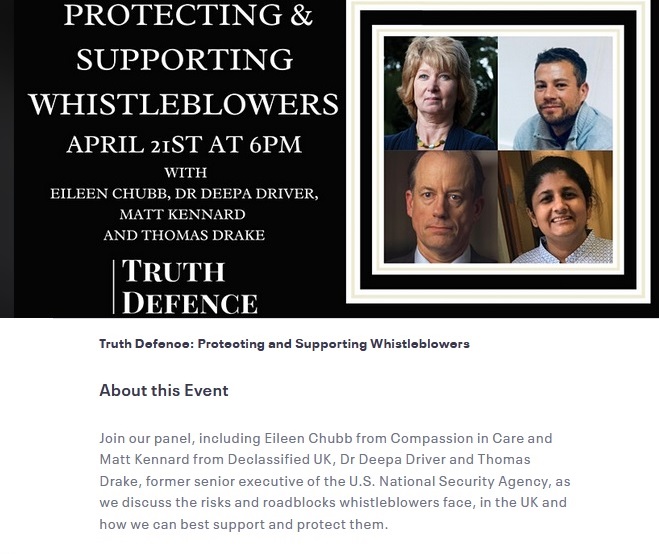 We continue to report on harm to vulnerable - read Designated Disaster

A formal response is now being prepared, following our lawyers' initial discussions with the Charity Commission, in which they clarified the evidence to aid the Commission's understanding of our work.

Factual errors made by the Commission have been identified and discussed.

One issue is that the Commission does not like us publishing critical reports about Government, the care industry or regulators such as the CQC, and the frequency of our reports.

The Commission says: "...these (articles) need to be viewed as strategic public relations and therefore should only promote the charity and build a positive reputation and public image".

But we're not that kind of charity. We don't do public relations spin. We report facts.

We're more interested in evidence and looking after our beneficiaries, not our image.

Compassion In Care was set up to protect vulnerable people and we refuse to be censored. Our reports and our campaign for Edna's Law are vital to that protection.

Our Supporters expect us to publish when we become aware of actual or potential harm to our beneficiaries and that is what we will continue to do.

All Trustees and our Volunteers are in agreement that Compassion In Care must continue to save lives by exposing the shocking failures of the Government, the care industry and regulators, so here is the link to our latest report: Designated Disaster.

If we are the kind of charity that you the public want, then please continue to support our fight against censorship, and thank you again for your pledges and messages of support, and for sharing the link.