No Covid Vaccines for Children Without Proper Consent

No Covid Vaccines for Children Without Proper Consent

Consent Charity
Case Owner
Consent is a UK registered charity with the aim of upholding parents' rights to decide on the treatment of their children.
Funded
on 17th September 2021
£37,002
pledged of £55,000 stretch target from 1,363 pledges

Consent Charity
Case Owner
Consent is a UK registered charity with the aim of upholding parents' rights to decide on the treatment of their children.
Share on Facebook

NHS Trust promises not to vaccinate

Thanks to your support, we have been able to support a mother whose son was v…

Help us challenge the government's rollout of Covid vaccinations for children

The UK government is determined to vaccinate children aged 12-15 against Covid-19 and may well allow them to have the jab without their parents' agreement.

How can a 12-year-old consent to something that even experts are divided over?

Even if parents do agree, they cannot know the real risks, because there is no long-term data to base such a decision on. Clinical trials are ongoing, so safety and efficacy data for children is currently lacking.

Consent given without the necessary information is not legally valid.

The drive to vaccinate healthy children is being pushed ahead despite the relevant committee of experts (JCVI) saying there is little benefit to children and uncertainty about the risks. In other words, it isn't necessarily in the best interest of the child to have the vaccine. Instead it is society at large that is meant to benefit.

Help us stop this irrational action!

We have instructed solicitors and enlisted the help of a leading QC to take the government to task and go to court if necessary. But we need your help.

This is your chance to make a real difference. Support our campaign and spread the word. Together we can make common sense prevail.

NHS Trust promises not to vaccinate

Thanks to your support, we have been able to support a mother whose son was vaccinated against her express refusal. We are currently exploring legal remedies and will tell you more about the case once details become clear.

Meanwhile though, the mum received a letter for a second dose to be administered at the same school. Concerned that her "no" would once again be ignored, she asked us to step in. Our lawyers wrote to the NHS and obtained written assurance that the boy would not be given the vaccine.

1. The lists provided to the vaccination team on the day will ONLY have those names
of children whose parent/s or guardians have consented to them being
vaccinated.

3. The operational manager and clinical leads for the vaccination
team have been specifically instructed not to vaccinate X even if he
attends the clinic and to pass this information on to all staff in the team.

Instructing lawyers is expensive. We are still grateful for every donation. Also, a lot of people don't even know that the Consent charity exists, so please tell your friends.

Consent in the METRO this morning

In the Metro newspaper this morning Consent is calling for government to respect informed consent for children's covid jabs. 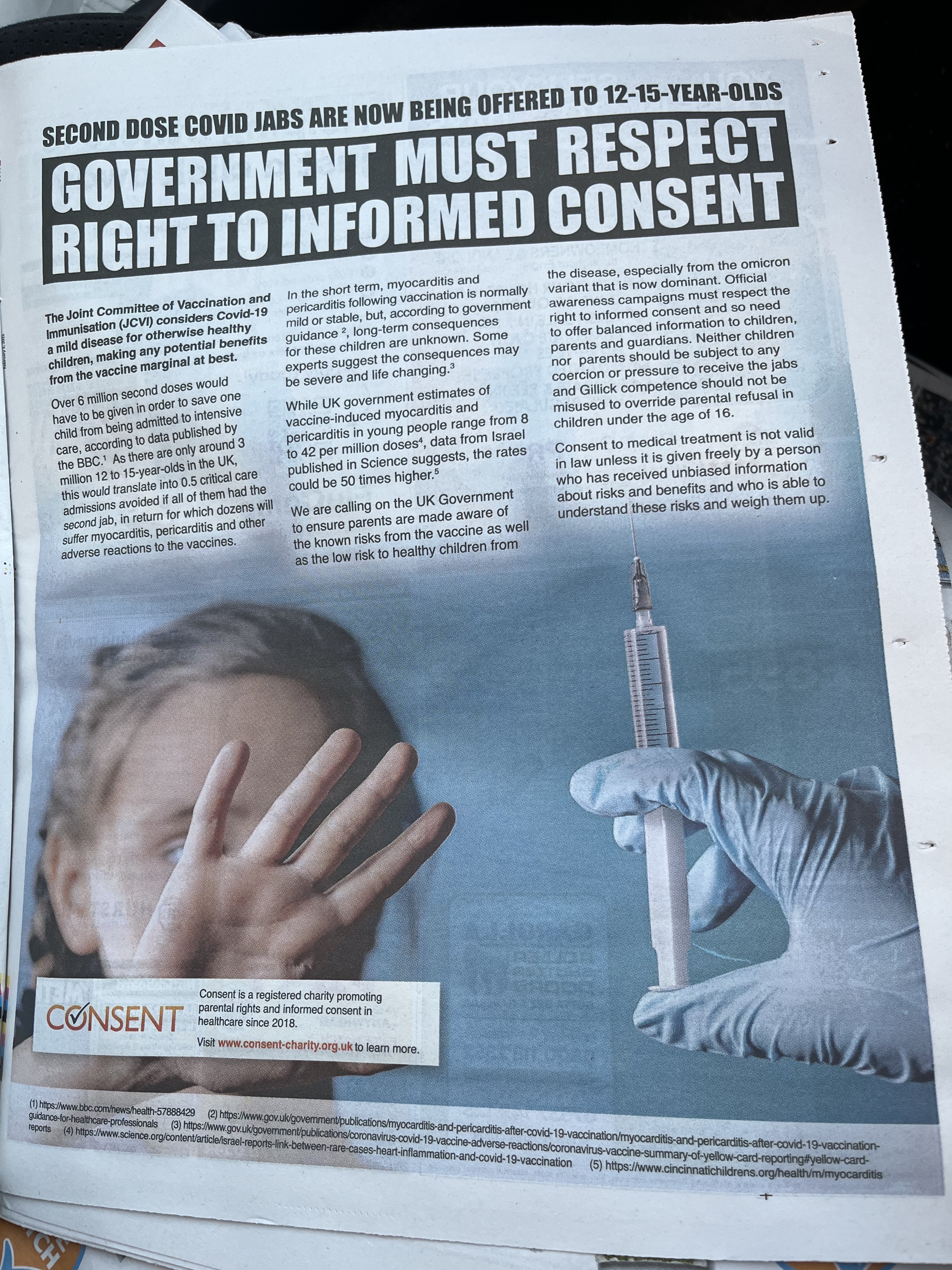 We owe you an apology. It has been months since you last heard from us.

When the government announced Covid jabs for children in late summer, we were quick to act and your generous support put us in a position where we could support a parent in going to court to challenge the policy that allows children to say yes to the jab when the parent had said no. However it took much longer than we expected for a parent to approach us - a parent who actually followed through with the required actions and letters needed; a parent who was a doer and not just a moaner. This is not meant to criticise but to praise the mother we were working with.

Once we were all set and ready, incredibly, we could no longer find any barrister prepared to take the case on. Is the v-word that toxic now? It seems so. However, there is also the fact that it was a very difficult case to argue before a court, at least in a "pre-emptive" case. We wanted to stop vaccinations without parental consent from happening in the first place. Sadly such cases have happened now, as we all knew they would. Yet with the NHS trusts all saying the "right" thing, promising to be good and to not do anything without consulting parents first, the court would have been hard pushed to see an immediate threat that needed a court decision.

Now that vaccinations without parental consent have happened, we have started hearing from parents who said no, just to find their teenager come home and inform them that they had the vaccine anyway. If we can show that consent was not lawfully obtained, this will open the door to damages claims.

Although it doesn't reverse the jab being given and although we were unable to act pre-emptively against biased information, peer pressure and dodgy competence assessments in schools, these practices need exposing and families compensating.

We will continue to work with the excellent team at Truth Legal solicitors to support affected families and look forward to sharing progress with you in the coming weeks.

YOUR CHILD COULD BE VACCINATED EVEN IF YOU SAID NO

You may have heard reports on social media of children coerced into having the C19 vaccine despite their parents’ refusal. If even half of these are true, this is alarming.

Our legal team is ready to bring a test case to court against this practice and we have instructed Jeremy Hyam QC to help us. Currently, children and teenagers can override their parents decision in school and they will not necessarily do so for the right reasons. Try and remember what you were like at 12 and how much of this current controversy you would have understood or, frankly, cared about. This needs to stop.

However, we can only support a family with a real case. We cannot challenge the practice in principle without a claimant. We are inviting parents to use our pre-action letter and then get in touch with us. Much of the vaccination rollout has already taken place but there is still time and there will be booster vaccines in the future and quite possibly vaccinations for younger children too.

Challenging consent of 12-15 year olds in court means vaccination information and practices are heard on the legal stage. It can keep the topic in the public domain and therefore keep up pressure on schools and immunisation teams to engage with parents. Moreover, it could reshape the legal landscape of so-called Gillick competence for all healthcare interventions in the future and ensure proper, balanced information is given to parents.

If your child has already received the vaccine without your consent, we still want to hear from you.

Are you worried your child will consent to Covid-19 vaccines against your wishes?

We are supporting parents who disagree that children as young as 12 should be allowed to give their own consent to the jab in school. If you are one of them, here is your first step of action.

We have launched a video to spread the word. Please share.

Click here to read our press release of 12th September.