Keira Bell
Case Owner
I'm an ex patient of Gender Identity Clinics where I was prescribed dangerous, experimental drugs and received a double mastectomy procedure. I am fighting to stop this from happening to minors.
8
days to go
£13,705
pledged of £30,000 stretch target from 545 pledges
Pledge now

Keira Bell
Case Owner
I'm an ex patient of Gender Identity Clinics where I was prescribed dangerous, experimental drugs and received a double mastectomy procedure. I am fighting to stop this from happening to minors.
Pledge now

This case is to challenge the existence of 'gender identity' in the Memorandum of Understanding (MoU) on Conversion Therapy document. This current document prevents clinicians from helping children suffering from gender dysphoria to be at ease in their sex.

I am Keira Bell, an ex patient of Tavistock’s Gender Identity Development Service (GIDS) for under 18's, and later the adult Gender Identity Clinic (GIC) in London. I am now in my early 20’s and I began the process of medical transition in an attempt to change my sex to male at the age of 16. I was a gender non-conforming child and later struggled with hatred for my female body, low self-esteem and found it hard to connect with people throughout my teens. At the age of 14 I really began to struggle with my sense of identity and especially the thought of becoming a woman. I thought I found the answer to my problems when I discovered transsexualism and stories of transsexual people on the internet. Soon after, I began to pursue this path. This led to the GIDS where I was welcomed and affirmed as a boy. It wasn't long before I was injecting GnRHa analogues ("puberty blockers"), then cross sex-hormones and when I was 20 a double mastectomy procedure. By then I had believed a lie (that my real problem was being trapped in the wrong body) and had been helped to believe that lie by the very people who were meant to help me.

I was initially very happy with my decision, the results of cross-sex hormones and surgery. I felt that finally I could start to live in peace as a man. However, some years later this began to wear off and I realised that the real distress I was experiencing (and had experienced as a child) was connected to the trauma & many challenges of my childhood and adolescence.

I began ‘detransitioning’ (stopped the process of medical transition) over a year ago. In my tormented state of mind I was not able to identify how incredibly destructive transition was. As an adult I now realise that medical transition was unnecessary and something I wish I had avoided. However I have now been left with the life-long consequences of medical treatment for gender/sex dysphoria (including a deep voice, facial hair and no breasts). I had peripheral doubts on and off throughout transitioning but pushed through these after reading online comments by other trans people that doubt is normal and by being affirmed as a boy by the clinical team that worked with me. I now reject the harmful concept of gender identity (in terms of your brain and/or soul having a gender) and the idea that someone can be born in the wrong body.

This case is not about compensation. There is no pay-out with this type of case. This case is challenging the policy of the NHS that prevents clinicians from helping children suffering from gender dysphoria be at ease in their sex. That policy is set out in the Memorandum of Understanding on Conversion Therapy.

The Memorandum of Understanding on Conversion Therapy was originally a document rightly created in order to prevent conversion therapy for sexual orientation. However this document was updated in 2017 to include gender identity and it has been signed by many pro-trans institutions, by several psychotherapy bodies and also by the NHS. It regards all gender identities as of equal value and validity and states that no gender identity is to be preferred to any other. Attempts to help change or suppress a gender identity are seen as conversion therapy, unethical and potentially harmful. In practice this means that girls who believe they are boys are to be affirmed in that belief. Similarly boys who believe they are girls are to be affirmed in that belief. This limits the ability of clinicians to help children with these beliefs to be reconciled to their natal sex. If a clinician tries to challenge a child's misguided belief or explore its causes with a view to alleviating gender/sex confusion they run the risk of being accused of conversion therapy. This pressurises clinicians to adopt an affirmative approach to the beliefs of children and young people, affirming the gender they believe they are.

This addition of gender identity to the document reinforces the pseudoscientifc idea that gender (in terms of a gendered brain) is real and innate. This idea resulted in mine and many others traumatic medical transitions. The current MoU also creates double think and it is ironic because in fact a lot of the LGB community are pressured in one way or another to transition, sometimes used as a fix to appear heterosexual.

WHY AM I BRINGING THIS CASE?

The current MoU associates exploring the origins of a person's gender identity with gay conversion therapy. This stigmatises such explorative psychotherapy and limits the ability of clinicians to provide an appropriate therapeutic response. It also undermines clinical research into the comparative effectiveness of different therapeutic modalities. Positive affirmation is not the only approach available. An approach of watchful waiting where the young person is not affirmed in their beliefs about their gender but given time and support to accept their sex has proven to be effective with many children and young people.

2. To limit the harm children are more likely to suffer by proceeding to experimental medical treatment.

If a child or young person is affirmed in their belief of the gender identity they are more likely to persist in that identity. This makes it more likely that they will embark upon experimental medical treatment that has irreversible life-long consequences.

The MoU sanctions a drastic form of conversion therapy. By advocating an affirmative approach the MoU is helping a child or young person be converted into something they believe and feel they are. This approach can lead to taking powerful drugs that can make a young person infertile as well as removing from them the possibility of normal sexual functioning. It creates lifelong medical dependency. It is a harmful form of conversion therapy premised on the beliefs and feelings of vulnerable children at a time when they are not fully able to appreciate the consequences of the decisions they are making.

I decided to transition after dealing with an abundance of mental and body issues. I did not realise it at the time, but this is (unfortunately) extremely common, particularly for young, pubescent girls in this society and it is a common denominator between most female transitioners and detransitioners. My transition began in the early 2010’s, which can now be identified as the pivotal point in time when the surge we are seeing began; teenage girls across the globe suddenly feeling incongruent with their sex. There has been no investigation into this. See below the increasing referral rates to the Tavistock GIDS over the last 10 years... I was a part of this statistic. 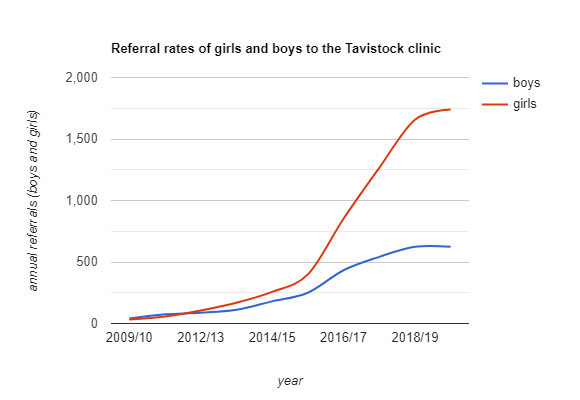 I hated my female body, periods, make-up, dresses and anything feminine. I thought that I must be male. It was never challenged by the people who were treating me. It was encouraged.

I have now come to realise that gender identity is in fact a reference to gender roles and stereotypes. Therefore it is regressive to have the idea that gender (role/stereotype) non-conforming (GNC) people are really the opposite sex or are different from their biological reality. Similarly, as mentioned above, feeling disconnected or experiencing hatred for your body is unfortunately not uncommon for young girls.  It has resulted in many young, vulnerable people risking their health and damaging their bodies because they have been affirmed in their belief that they have been born in the wrong body. 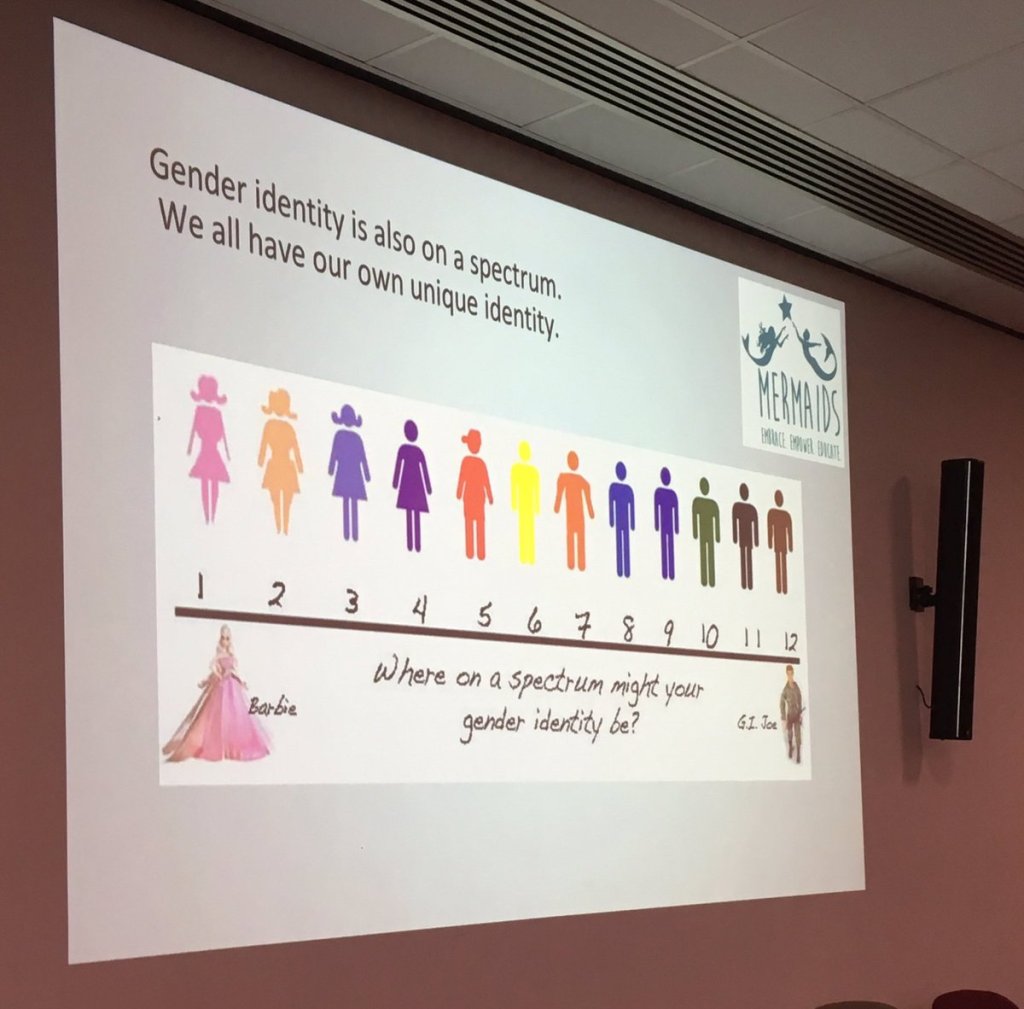 I have instructed a specialist law firm and a QC and junior barrister from a top set of barristers chambers. My lawyers have now written to NHS England asking them to reject the MoU on Conversion Therapy and to issue new guidance to practitioners that is based upon a careful independent review of the research literature. They have also informed Liz Truss, the Minister for Equalities and the Tavistock of this possible legal action. The NHS has two weeks to reply and if it does not agree to reject the MoU I will commence proceedings in the High Court.

I am crowdfunding so that I can raise enough money for my legal fees in order to ensure this case can be taken all the way to protect the vulnerable. I empathise with and relate to anyone suffering with sex/gender dysphoria and I am making it my mission to truly help those affected. Please help out with a donation if you can.

The funds that are donated will go to an account held by my lawyers.

Thank you so much for your support.