Lynne Sandford
Case Owner
Michael was arrested in June for grabbing a policeman's gun at a Donald Trump rally. Sentencing is on 13th Dec. We need to raise funds to bring him to the UK to serve his sentence near his family.
Funded
on 08th December 2016
£11,640
pledged of £15,000 stretch target from 314 pledges

Lynne Sandford
Case Owner
Michael was arrested in June for grabbing a policeman's gun at a Donald Trump rally. Sentencing is on 13th Dec. We need to raise funds to bring him to the UK to serve his sentence near his family.
Share on Facebook

I hope you all enjoyed the festive period - and a Happy New Year to you all. I would like to start by thanking you all again for the tremendous support you have shown to us - it is tr…

On 13th December, my son, Michael, will be sentenced for being an illegal alien in possession of a firearm and for disrupting government business.

Michael is a 20 year old man with Autism. He has multiple physical and mental health problems. On 18th June 2016, Michael, who has also been diagnosed with OCD, severe depression, seizures, cardiac issues and Crohn’s Disease – was arrested in Las Vegas for attempting to grab a policeman’s gun at a Donald Trump rally. He later told police he had wanted to kill Mr Trump and had expected that he would die in the process.

Michael’s actions were completely out of character. He is an extremely vulnerable young man and we believe that he needs to return to the UK in order to serve his sentence. This way, he will receive appropriate medical treatment and can be visited regularly by his family – we are Michael’s only source of support.

Many kind people have generously donated to contribute to legal bills and expert opinion to help Michael’s case.  We are now hoping to raise more funds to pay for the legal team to get Michael transferred back to the UK after his sentencing hearing.

Thank you very much indeed for your generous and kind support in helping us exceed our first fundraising target of £25,000. We are enormously grateful to our supporters. Michael himself has asked to pass on his deepest thanks to all those trying to help him.

We really need your help. If you are able to give again, it is our plan to apply under the prisoner transfer agreement for Michael to be transferred to serve the remainder of his sentence in the UK. Most of the funds raised have been used on the legal battle so far - but if we are to continue to help Michael, we need to raise more.

Thank you in advance for anything at all you are able to give.

Your contributions enabled me to visit Michael in prison in Las Vegas with his UK-based lawyer, Saimo Chahal QC (Hon) of Bindmans LLP, his grandmother and his little sister. It was so wonderful - yet so tormenting - to see my son. We were separated by a mesh screen, and it was heart‑wrenching to leave him behind. Ms Chahal discussed Michael’s plea agreement and possible sentence with his US‑based attorney. 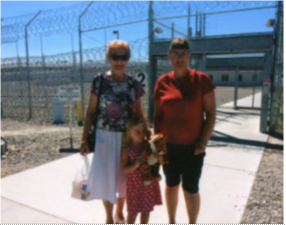 Me, Jessica, and Michael's grandmother outside the prison in Las Vegas 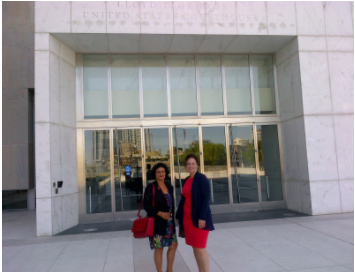 Michael’s health has deteriorated as I had feared. He has lost a considerable amount of weight and is barely eating. He's being given erratic medication which he is sometimes inappropriately denied. Michael is unable to sleep at night because the lights in his cell are kept on all night. He has received death threats and is severely depressed. 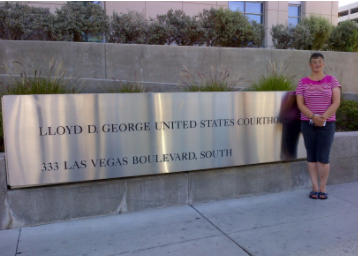 Unfortunately, I have to reach out again to plea for more funds now ahead of Michael’s sentence on 13th December. Michael remains extremely remorseful at his actions, but is terrified at the implications of the election result for him with sentencing drawing nearer.

I am not asking for my son to escape punishment for what he attempted to do. But because of his severe mental and physical health problems, his family – who love him very much – want him returned to the UK. We want him to serve his sentence in a safe institution for vulnerable people, where he can receive appropriate help and be closer to family. 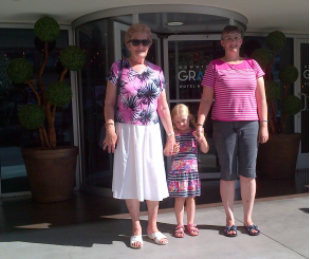 Michael’s grandmother, sister, and I on visit to Michael, Sept 2016

Michael has been sending us letters from prison: 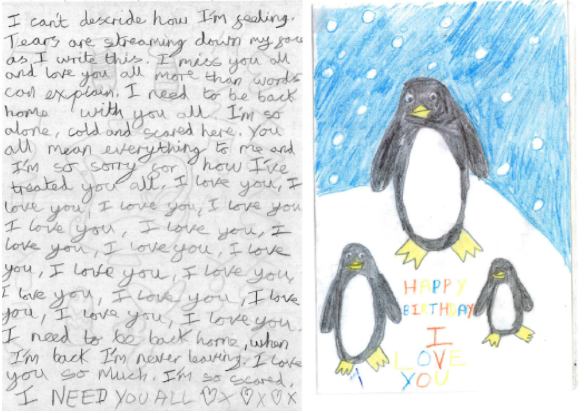 We all desperately need to get out there for sentencing - Michael has requested us all to be there. I am so very fearful of what will happen to him once his sentence is handed down. We will have to leave Michael behind again, thousands of miles from home, alone, over Christmas.  If Michael thinks that he has to serve all his sentence in the US away from his family I fear that he will successfully take his own life.

We are being advised in the UK by Saimo Chahal QC (Hon), a distinguished human rights lawyer known for her handling of complex and ground breaking cases. She is a Partner at the leading law firm, Bindmans LLP. Ms Chahal, who also specialises in Mental Health law, is helping us try and get Michael back to the UK.

I hope you all enjoyed the festive period - and a Happy New Year to you all. I would like to start by thanking you all again for the tremendous support you have shown to us - it is truly amazing to know how many caring, sympathetic and generous people you all are. It is enormously appreciated. I would like to take this opportunity to fully update everyone on Michael's sentencing.

Michael was sentenced to a year and a day (he is entitled to time off for good behaviour if he got a sentence OVER a year - which is where the odd day comes into play.) As he had already served 6 months of his sentence, he only has 6 months left to serve - minus 2 months for good behaviour, and although there is no official release date yet, we are looking at the end of April. he will then be moved to customs and immigration detention for a minimum of 3 weeks while they sort out deportation.

As a family, we are overjoyed - and extremely glad that the judge was such a fair man. He took into account all of Michaels glowing character references - and we had extremely thorough - and superb - psychiatric assessments done on Michael. It was through these that we discovered new information about the illnesses Michael was suffering from at the time of the offence. The judge took all this onboard, and could clearly see Michael was not his usual 'clientele' . He told Michael not to be ashamed of his conditions. Michael was shaking from head to foot in court and had to be steadied by the lawyers. When he addressed the judge he broke down and was hugely remorseful.

His appearance in court shocked me - and his suffering was very evident from his appearance.

We got to spend 5 mins with Michael separated by a mesh screen at the courthouse afterwards, and then visited him separately at the prison (via the video link there.)

Michael is of course enormously relieved, however still suffers panic attacks and constant anxiety as he worries something could still go wrong - and I don't think ANY of us will relax until he is back on UK soil.

I am now setting up meeting with various agencies re the kind of care and support that can be set up for him once he returns.

I would like to sincerely thank those of you who sent Christmas cards for Michael. Very sadly however only a small portion of those were allowed by the prison for varying reasons, and the rest are destroyed unseen, but we remain truly grateful to anyone who took the time to do so.

A documentary has been made about Michaels life - and the events of the last year. It will be available to download via iPlayer from 10am Jan 20th on BBC3.

Our sincerest wishes and thanks,

Michael will be sentenced today

Michael will be sentenced today at the Court House, Las Vegas around at around 10:30am local time. His mother Lynne,  sister and grandmother have gone to be hear the court’s verdict and to support Michael at this critical time. Depending on the sentence, Michael may be transferred to another prison and he may wish to apply to be transferred to the UK to serve the remainder of  his sentence back home.

Saimo Chahal QC ( Hon) Michael and Lynne’s UK lawyer said: “ It will be an incredibly  tense time today for Michael. I hope the sentence handed down later today  is a  compassionate one which fully takes account of the mitigating circumstances, namely the  serious mental health disorders  which led him to commit the offence”.

You are very welcome to send us a card for Michael if you would like to wish Michael well and support him with a message over Christmas.  We will collect the cards and forward to Michael. All cards should be sent C/O Ms Sahib, Bindmans LLP, 236 Gray’s Inn Road, London, WC1X 8HB.

Thank you enormously to everyone for their kindness and generosity at this time of year. We are truly touched. We have been reading the kind messages of support in the comments which are really comforting - and I have been able to read them to Michael over the phone.

Best wishes to you all.

We hit our first target!