We need your support to fight the fur trade

The bunnies were found guilty on all charges at trial.

They now have criminal convictions & have been ordered to pay for the rather excessive ca.4k cleaning fee of the stone steps of the store.

It is ironic that while fighting against those with blood on their hands, they are ordered to pay for fake blood on storefront steps.

The L214 report  into fur farm atrocities was not allowed as hearsay evidence in court and the fight continues to have details of their fur purchases exposed.

In terms of next steps, counsel have outlined possible actions from appeal to the Crown Court to a civil action re the lawful nature of fur and other steps beyond this.

These are currently being explored.

This case may well still shine a spotlight on the exact nature behind D&G’s fur purchasing and bring them to either disclose their activities and hopefully to drop fur sale altogether.

On 20 September 2019, four women dressed as rabbits ( known as "the Bunnies") protested against Dolce & Gabbana's use of fur in their collection. They had the courage to stand up to D&G, a company with revenues of over €1.3 billion who deployed heavy-handed tactics against these champions of animal rights.

Please help us send a message:  the Bunnies refuse to be bullied into silence.

Help Aima, Helen, Sapphire and Dagmara fund a legal defence to give them the best chance to stand up to D&G and not be persecuted for doing the right thing. 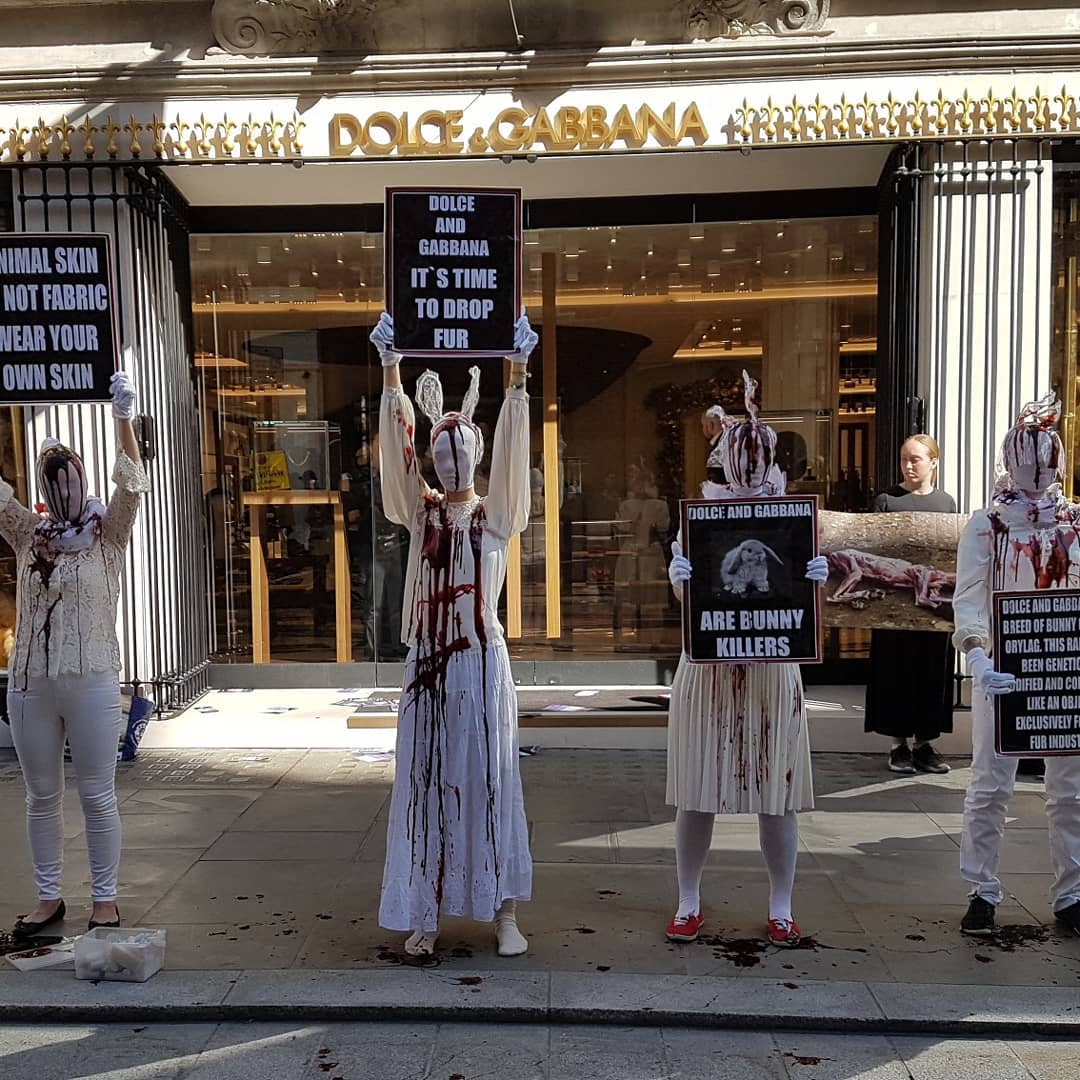 The Bunnies have been involved in protesting against D&G's import and sale of farmed fur, which is illegal to produce in the UK, but not to sell.

The fur comes from genetically modified Orylag bunnies bred outside the UK and then traded here.

Though the sale of fur in the UK is legal the Bunnies believe the practice of selling fur is abhorrent, distasteful and immoral and they want it stopped.

Following their performance-like protest inside and outside the Dolce & Gabbana's London Mayfair store on 20th September 2019, the four Bunnies were arrested and charged.

Even though no garments were damaged in any way and the store security used what the Bunnies believe was unnecessary excessive force to remove them from the store, it is the Bunnies who stand trial with various counts of aggravated trespass and criminal damage as a result of what took place.

As of yet no action has been taken against the store.

Their trial at Hendon Magistrates court is set for 21 September 2020.

They are pleading not guilty. 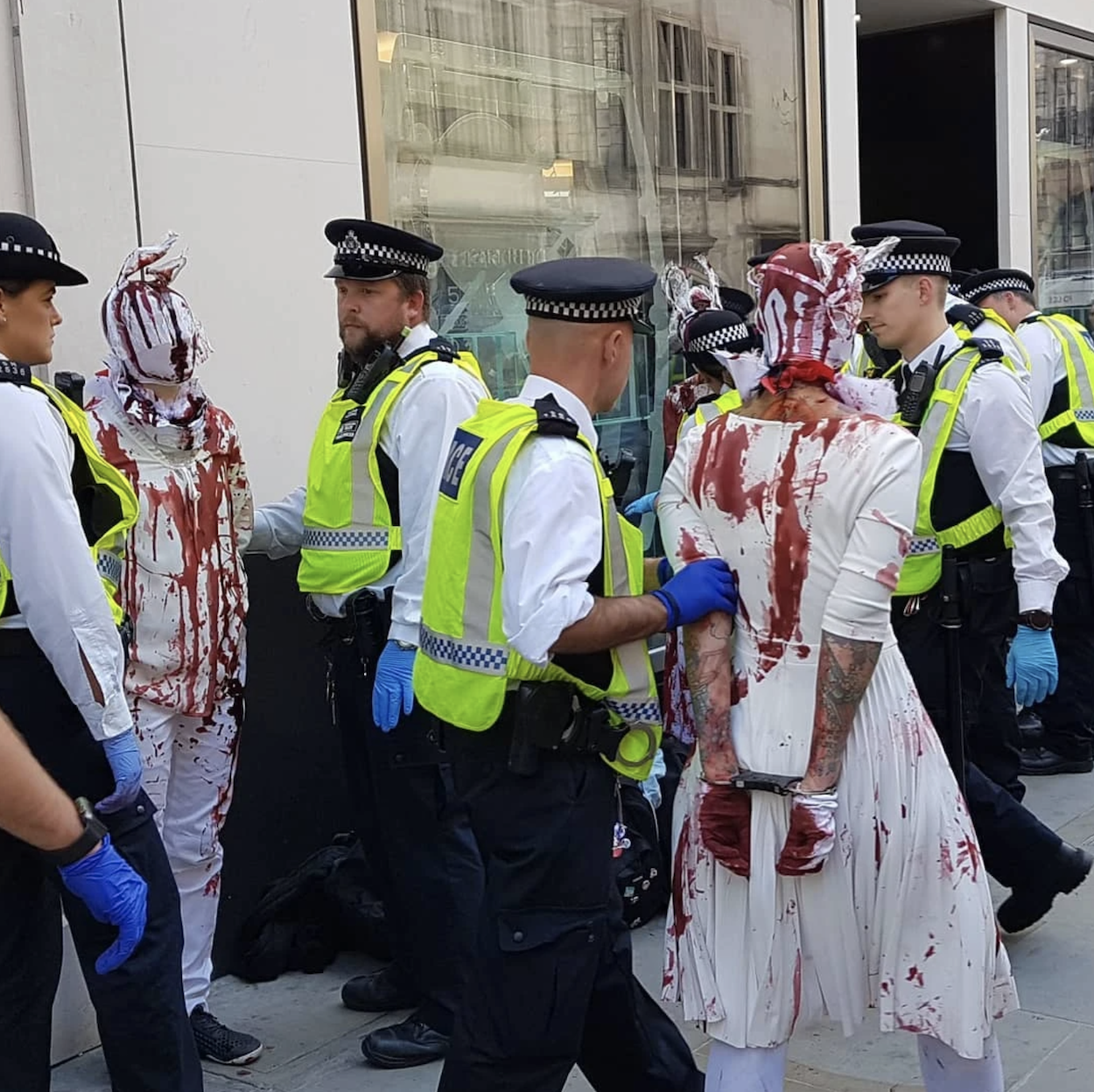 THE CASE: WHAT'S THE INJUSTICE HERE? 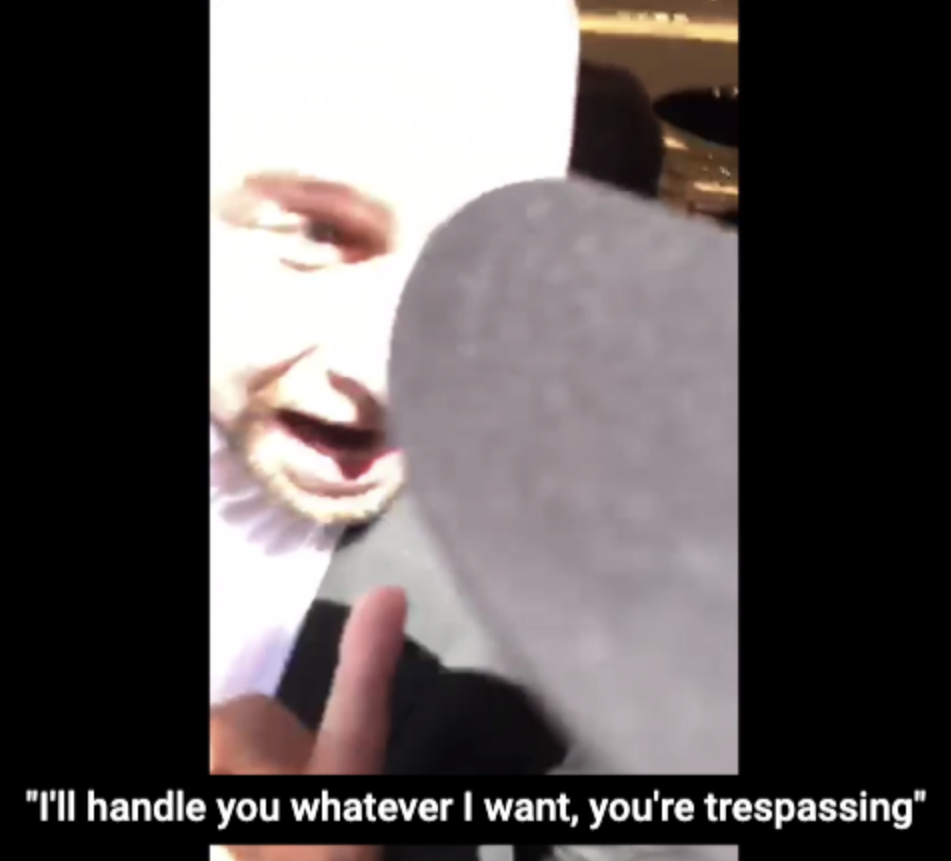 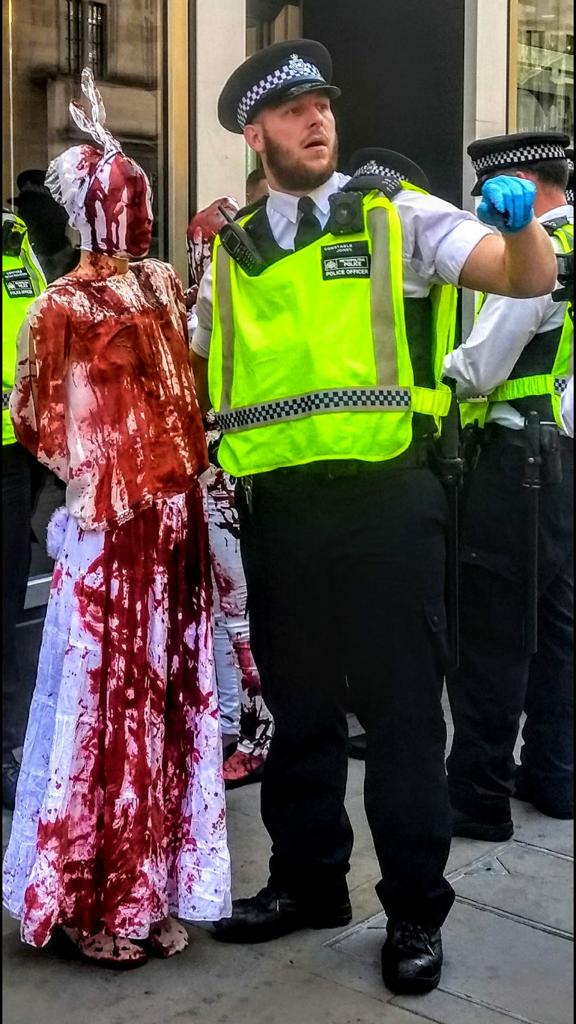 We believe no-one, anywhere, should be treated this way, and certainly not in central London by a global fashion brand.

These actions draw a striking parallel to how Orylag bunnies themselves are treated every single day. If this can happen to humans protesting in broad daylight in front of dozens of cameras, imagine what happens behind closed doors to silenced rabbits in farms where filming has been made illegal and their screams can not be be heard. Think about it. 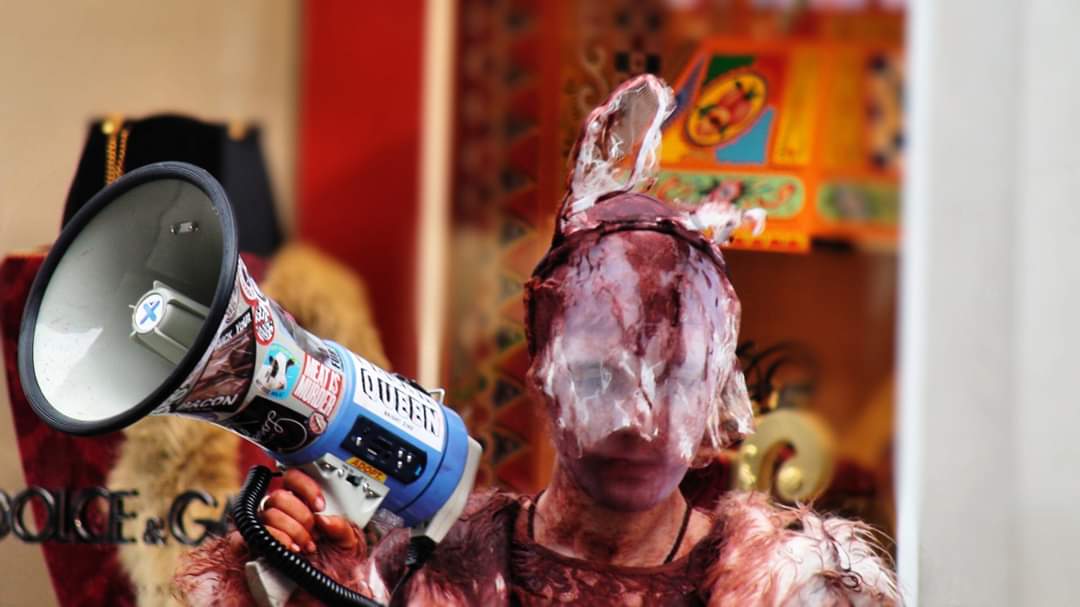 OUR AIMS: WHAT DIFFERENCE CAN YOU MAKE?

This is a moment in time where we can stop the fur trade for good!

We want to take the fight to D&G and the fur trade and we need YOUR help. 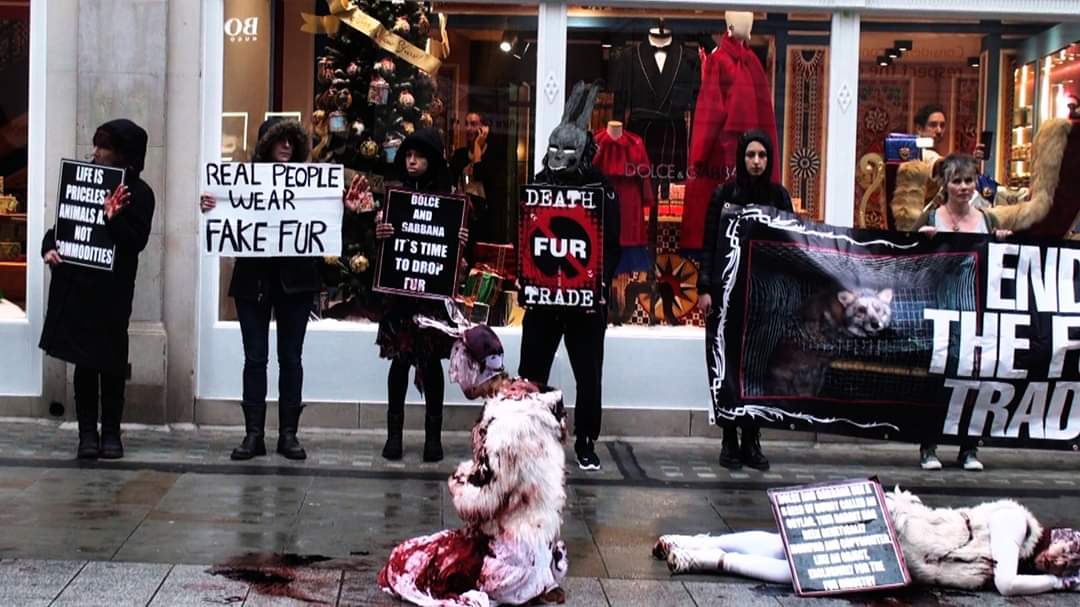 Please contribute £10 today (or whatever you can afford) so we can attain justice for the bunnies and bring the fight to the fur trade.

INITIAL GOALS - Essential to this case

£10K: This will go some way to fund costs/fines for the bunnies and partially fund the defence and PR teams.

£25K: Fully fund the legal defence and PR teams who have been working without pay because they believe in the cause.

Thank you for being part of this fight!

We are also looking for information to support our cause. Do you know anything that might assist the Bunnies?

This case may hang on whether the court finds that Dolce & Gabbana's activities are actually lawful. The Bunnies believe that the fur may have been obtained from farms whose treatment of Orylags falls foul of EU laws.

WE ARE THEREFORE LOOKING FOR FACTS

In 2000, the UK made it illegal to keep and farm animals “solely or primarily for slaughter for the value of their fur.” Nevertheless, big fashion brands such as Dolce & Gabbana continue to sell products made from imported Orylag fur as the sale of that fur is still legal in the UK. Orylag rabbits are genetically modified and farmed for their dense fur. There are no wild Orylags.

Dolce & Gabbana has been embroiled in controversy over its fur farming practices since 2017, when French activists from L214 documented the practices on certain Orylag farms which the activist groups claimed to have supplied D&G.Commenting on the L214 findings, animal rights charity PETA said : "the rabbits know only darkness and pain inside their tiny, decrepit prisons, where they were left for months to suffer from sores, dehydration, malnutrition, and other injuries and ailments.”

The bunnies are supported by JUSTICE CHAMPIONS, a round table comprised of:

This innovative new alliance aims to help people champion their causes both in the courts of justice and the court of public opinion.

Their legal & campaign teams as well as contributors are:

Thank you for helping bring injustice to light! 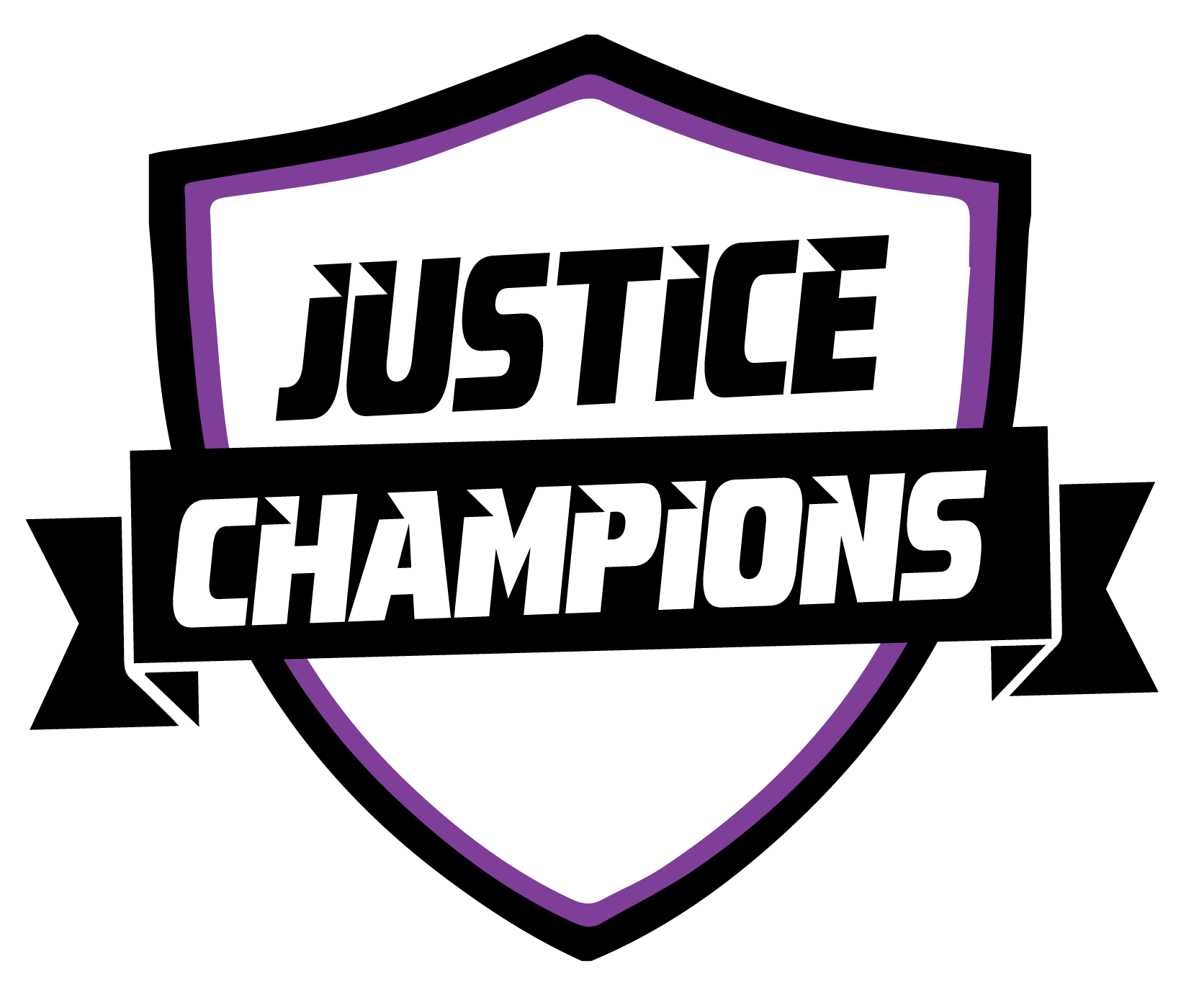