As you know, in 1971, Dougald McCaughey (23), John McCaig (17) and Joseph McCaig (18), three young Scottish soldiers, known affectionately as the Three Scottish Soldiers, were brutally executed by me…

My name is David McCaughey.  Royal Highland Fusiliers Dougald McCaughey and two brothers, John McCaig and Joseph McCaig, were three British soldiers murdered by the IRA in Belfast while off-duty. Dougald was my cousin.  They are affectionately remembered by their regiment as ‘the Three Soldiers’. John was only 17 years old.

Following formal requests to the Police Service of Northern Ireland (PSNI) and the Metropolitan Police Service, our legal team were allowed to inspect the investigation files. They also carried out their own independent enquiries.

What they discovered is that the existing PSNI report did not tell the families everything and that, despite knowing the names of a number of suspects, the authorities have never brought them to justice.  Instead, they have been allowed to live freely in the Republic of Ireland.

All we, the Three Soldiers’ families and loved ones, want to know is the truth of who was responsible for their murder and the chance to hold them to account. This is why we're calling for a new inquest to be held. In doing so, we may find some peace in knowing that we have honoured their memory.

It is a scandal that we are forced to read in the papers everyday how British Army veterans are being pursued through the courts while terrorists are allowed to live out their days without fear of prosecution. Anyone responsible for murder should be brought to justice.  This preferential treatment given to terrorists must end.

Please support our campaign by donating anything you can - every little helps - and sharing this page on social media, and via email or WhatsApp.

Why we need a new inquest

Our legal team has now made an initial application to the Attorney General to direct a coroner to hold a new inquest, in the interests of justice, into the Three Soldiers’ murders.

A coroner has the power to reach findings that establish the full circumstances of the Three Soldiers’ deaths, including naming, after all this time, all of those responsible and putting the evidence against them on record.

Not only will the inquest give us and the public answers to questions we have been long been denied but should the Coroner find that the killing of the Three Soldiers was unlawful, it must send a written report on the case to the Director of Public Prosecutions (DPP).

It is our hope that the new inquest will make available and place on the public record the evidence necessary to the DPP for requests for extradition of any suspects from Ireland to be prosecuted. Finally, we will have a chance at justice.

What we can do

With your help, our legal team can:

Last December, our legal team successfully brought a case against the man responsible for the IRA bombing of Hyde Park, John Downey.  Downey has also been extradited from Ireland and is now facing trial for a terrorist double-murder.

This proves, when their government fails them, victims and survivors can take action themselves. They can bring the perpetrators to justice.

Our legal team has already met with the Minister for Veterans, Johnny Mercer to discuss their action.

What we need to raise

At this stage, given the nature of the case, it is impossible to know the final cost of the actions that need to be taken but, to continue our battle, we continue to rely on your support.  Hitting our next target of £20,000 will allow us to keep going and report back to you when further progress has been made.  Any unused funds will be used to support other legal actions on behalf of veterans or victims of terrorism.

Further background to the case

From the evidence we have seen, it appears that young women working for the IRA lured the Three Soldiers away from a city-centre bar with the promise of a party or another pub.  While walking down a quiet lane, they were ambushed by waiting gunmen and shot in the head.  The young women were spirited away.  The Three Soldiers bodies were left by the side of the road to be found by three young children out playing.  At the time, the authorities described their murders as “one of the vilest crimes ever heard of in living memory”.

As you know, in 1971, Dougald McCaughey (23), John McCaig (17) and Joseph McCaig (18), three young Scottish soldiers, known affectionately as the Three Scottish Soldiers, were brutally executed by members of the Provisional IRA while off-duty.  They were the first off-duty soldiers to be killed during the Troubles in Northern Ireland.

No-one has ever been held to account for these murders

Thank you for your support

We – the families of the Three Scottish Soldiers – want to take this opportunity to thank you very much for all the help and support you have provided, allowing us to continue our campaign to bring their killers to justice and to ensure accountability for these horrific murders.

It is with great sadness that we write to inform you that unfortunately, despite our hard fight, it seems we have reached the end of the road.

However, following two years of work, and multiple requests to the UK Home Office to engage substantively in this issue going unanswered, all our applications for further investigations and inquests have been refused.

We believe that either of these could have ensured that those responsible for the murders of the Three Soldiers were held to account and their families could at least achieve some form of justice. Unfortunately, this is no longer a possibility.

While we could have raised a legal challenge against the Northern Ireland prosecution services, we have made the difficult decision not to proceed any further.  We do take some comfort, however, that our legal team’s and our own investigations have answered many questions, provided more information and corrected several inaccuracies in the historical record.  While we did not reach our ultimate goal, we have still come a long way. 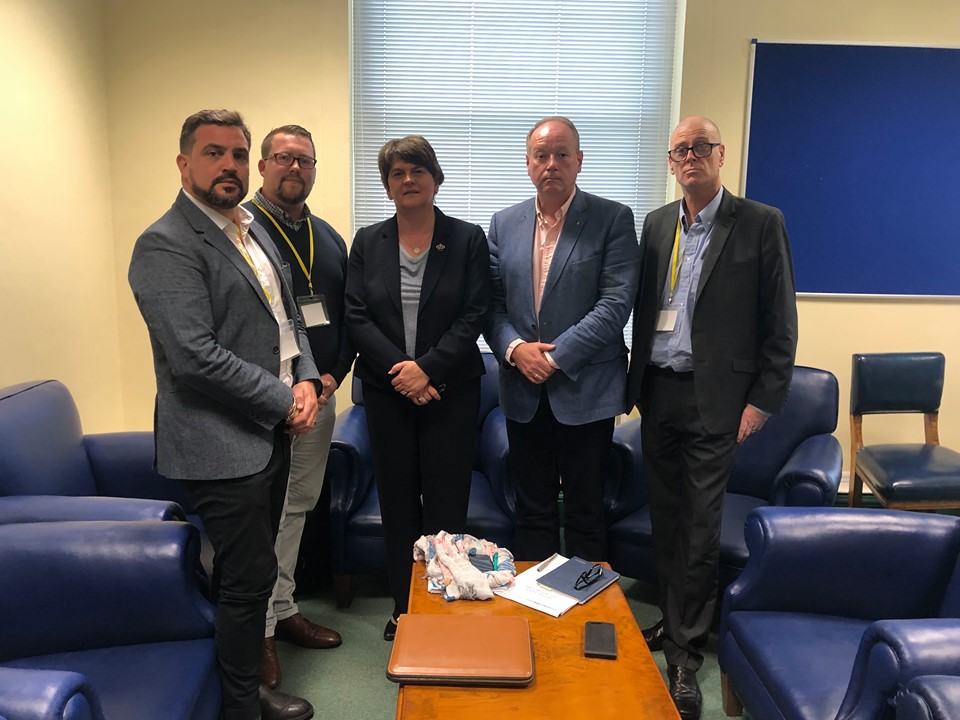 “Alongside William Humphrey MLA, I have met with a legal team acting on behalf of The Three Soldiers.

The team is seeking a new inquest and have requested such from the Attorney General. We support this application given the unanswered questions which remain, principally how one person confessed to the murder but then escaped custody and fled to the Republic of Ireland along with two other suspects. No extradition requests were made despite the Irish Prime Minister at the time publicly condemning the murders in strong terms.

No paramilitary organisation ever accepted responsibility for the murders.  The police concluded it was the work of PIRA members and new information points to significant premeditation and planning.

New questions based on new material have been raised, and therefore the matter should be investigated”.